Chamdo to Lhasa: how to get to Lhasa from Qamdo

Where is Chamdo and Lhasa?

Located in central Tibet, Lhasa is a prefecture-level city that has served as the capital of Tibet for more than 1,300 years. The administrative center of the Tibet Autonomous Region (TAR), this ancient City of Sunshine is the highest capital city on the planet, and the center of Tibetan culture and religion. Founded in the 7th century by the Tibetan King, Songtsen Gampo, as the seat of ancient governance for the Tubo Kingdom, Lhasa is the largest city in the TAR and second most populous city on the plateau, at an altitude of 3,656 meters above sea level. 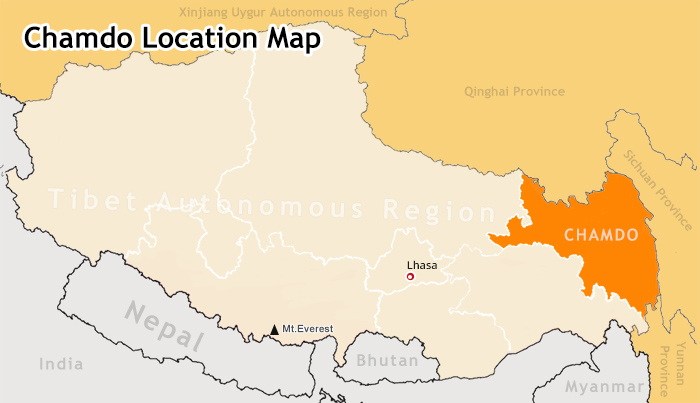 Chamdo, once a part of the ancient Tibetan region of Kham, lies more than 600 kilometers directly east of the Tibetan capital of Lhasa, the easternmost area of the TAR. Lying on the border with Sichuan to the east and Qinghai to the north, Chamdo is a prefecture-level city that is the third largest city in the TAR. The home of the Khampa people, a subgroup of the native Tibetans, Chamdo is the last major stronghold of the Bon religion in Tibet, and is home to the largest Bon monastery on the plateau.

How to Get to Lhasa from Qamdo

Traveling to Lhasa from Chamdo can be done by flight from the Chamdo Bamda Airport or by traveling overland along the Sichuan Tibet Highway. There are advantages and disadvantages to both routes to Lhasa from Chamdo, the main one being that foreign travelers are not permitted to use the airport.

Overland from Chamdo to Lhasa

More than 1,100 kilometers from Lhasa by road, the journey from Chamdo to the Tibetan capital can take 3-4 days, depending on how long you are driving for each day. On average, it takes around 22 hours of constant driving to make the trip along the Sichuan Tibet Highway, and is a journey that takes in some of the plateau’s most beautiful landscapes and scenery. The easiest route to get to Lhasa is to head south along the G214 from Chamdo Town to meet the Sichuan Tibet Highway at Litang, where you will turn west and head along the G318.

The G318 Sichuan Tibet Highway is a well-paved road that has been improved in recent years to make the drive from Chengdu to Lhasa easier and safer. For domestic travelers, you can drive this route yourself, using either a hired car or your own vehicle, while international tourists are only able to follow this route as part of an organized and pre-booked tour of Tibet with a registered Tibet tour operator.

The route along the G318 is one of the most scenic roads in the world, and takes you through some of the best areas of Chamdo and Nyingchi on the road to Lhasa. As well as passing through the amazing and vast Litang Grasslands, you will pass by the Basum Tso Lake, the most stunning lake in eastern Tibet, head through the Yarlung Tsangpo River Valley, which is covered in peach blossoms in spring, and get to stop at the amazing Ranwu Lake, surrounded by the stunning Midui and Laigu Glaciers.

Often considered to be the best way to travel to Tibet, the Southern Route of the Sichuan Tibet Highway is a road that is often used by pilgrims traveling to the Tibetan capital to pray in front of the Jokhang Temple, and it is not unusual to see these devout Buddhists prostrating themselves along the side of the road, often taking many months to reach their pilgrimage destination. 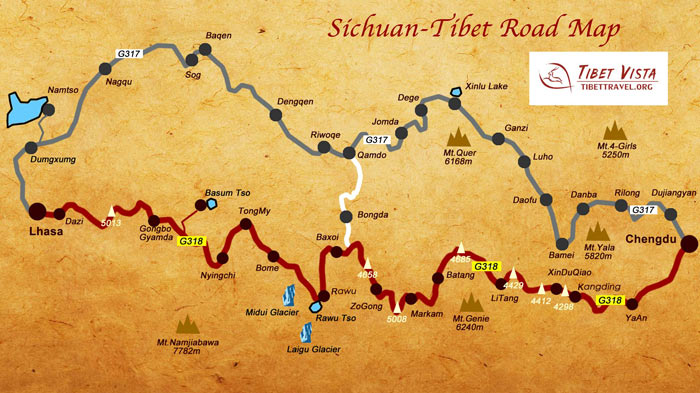 As well as taking the route from Chamdo to Lhasa along the G318, you can also head along the G317 to Lhasa from Chamdo, a slightly different route that has some great mountain scenery and landscapes. Part of the Sichuan Tibet Highway Northern Route, the road from Qamdo to Lhasa takes you out into Nagqu Prefecture and down into Lhasa along the Qinghai Tibet Highway. Road conditions on the northern route to Lhasa are not ideal, and it is a well-known route for having dangerous roads and poor road conditions in parts, with several gravel or dirt stretches of road.

The G317 passes through Chamdo as it heads west, and takes you through Riwoqe, Dengqen, and Nagqu, before heading south along the Qinghai Tibet Highway, through Damxung County and past Yangpachen to Lhasa. With a distance of around 1,067 kilometers, the route takes you through some of the most spectacular landscapes of Northern Qamdo, and several delightful small towns and villages where you can explore more about the Kham culture of eastern Tibet.

Traveling this route usually means being on a road tour of the Tibetan region, and with your guide and driver, you can make the journey to Lhasa in around 3 days, stopping in small guesthouses and hotels along the way. One of the most stunning sights along the route is actually before you even leave Qamdo Town. The Galden Jampaling Monastery in Qamdo is one of the most stunning monasteries in Tibet, and has a history that dates back around 600 years. Built in the 15th century, the monastery lies on a site recommended by Je Tsongkhapa in 1373, when he visited the region and predicted a great monastery would be built there.

You will also pass by the Riwoqe Monastery, where you can stop and admire the unique colors and architecture, and the Zizhu Temple, which you can see from the road, but which international tourists are not permitted to enter. Noted as the highest Bon temple in Tibet, at 4,850 meters above sea level, this stunning monastery is built right into the rock of the hillside, with rocky crags and outcrops interspersed with the monastery buildings.

Fly from Chamdo to Lhasa

Qamdo Bamda Airport and How to Get to/off the airport

Located in the village of Bamda in Chamdo Prefecture of Tibet, the Qamdo Bamda Airport, also known as the Changdu Bangda Airport, lies at an altitude of around 4,334 meters above sea level, and was once listed as the world’s highest airport. The airport, which lies around 126 kilometers from the administrative center of Chamdo, at Chengguan, provides flights to Chengdu, Chongqing, Lhasa, and Tianjin, and lies in the narrow valley on the west bank of the Yuqu River, beside the famous Banda Prairie.

Travel to the airport can be done by driving from Chengguan in Chamdo, which takes around three hours, or by using the shuttle buses that run several times a day to the city. The shuttle buses cost around 60 yuan per person, but you are limited on the amount of luggage you can bring. Taxis do run the route, though they are expensive, at around 250-300 yuan for the whole trip. 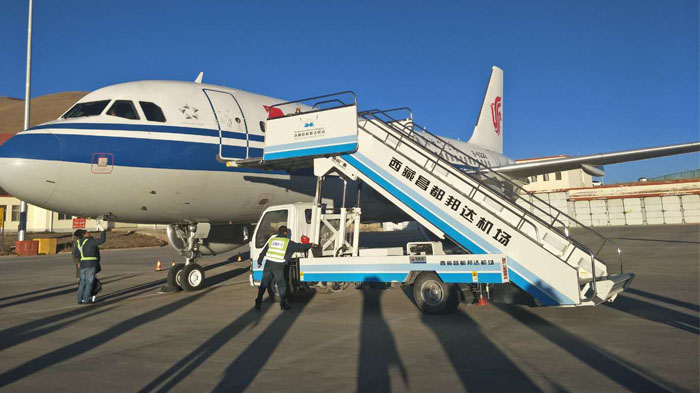 Chamdo Bangda Airport, the second highest airport in the world

Lhasa Gonggar Airport and How to Get to/off the airport

Lhasa Gonggar International Airport is the only international airport in the TAR, and is located in Shannan Prefecture, in Gonggar County, though it is closest to the Tibetan capital at Lhasa. The largest and most important of the five airports in Tibet, it is a major arrival and departure hub for tourists to Tibet. The airport offers flights to and from such major cities in China as Chengdu, Chongqing, Xi’an, Beijing, and Shanghai, as well as many more.

The airport can be reached from Lhasa by driving or by shuttle buses, which run daily between city and airport. At just 60 kilometers from downtown Lhasa, thanks to the new Airport Expressway, a car from the airport to Lhasa takes around an hour and a quarter. Buses run the route several times a day, and cost as little as 25 yuan per person, with no luggage restrictions. There are also taxi services available between the airport and the city, which can cost from 100-200 yuan, depending on the taxi and the amount of luggage you have. You also have the option of taking advantage of our shuttle service for all of our clients, which runs twice a day between the airport and the city, and vice versa.

Only one flight per day in each direction is operated between Lhasa and Chamdo, which takes around 1 hour 25 minutes to travel from Chamdo to Lhasa and around 1 hour 15 minutes in the other direction. The flights from Chamdo to Lhasa depart at around 9:35am daily, and arrive in Lhasa at 11:00am. The return flights to Chamdo depart Lhasa at 7:30am and arrive in Bangda Airport at around 8:45am. Flights each way cost around 1,510 yuan (around 225 US Dollars) per person for this 614-kilometer flight.

What travel documents do I need for Lhasa Chamdo travel?

For all tourists to the Tibetan plateau, there are certain documents that you need to have before you can enter Tibet, and there are additional documents required in order to travel to Chamdo, in eastern Tibet.

Aside from your passport and Chinese Entry Visa, which are required before you can do anything else, you will need to have a Tibet Travel Permit (TTP) in order to enter Tibet in the first place. This can only be obtained by a registered tour operator on your behalf, and once you have booked your tour, we will make the application using scanned copies of your passport and visa. Once received, the permit will be forwarded to your for travel to Tibet.

If you are flying to Chamdo, then you do not need other permits. However, for those driving along the Sichuan Tibet Highway to Chengguan, you will need to pass through Nyingchi, which requires an additional permit for travel. The Restricted Areas Permit, which is often known as the Military Permit, is required for travel to certain military sensitive areas of Tibet, of which Nyingchi is one. The permit is applied for by us on your behalf at the same time as the application for the TTP is made, and is done through the Public Security Bureau in Lhasa.

As with all permits and passes for Tibet, the permits required for traveling to Chamdo are only available once you have booked a pre-arranged Tibet Chamdo tour with a registered Tibetan tour operator. None of the permits are able to be processed personally, and independent travel in Tibet is still prohibited for international tourists.

For anyone thinking of traveling to Chamdo, you are in for the treat of your lifetime. This unique and rarely-visited area of Tibet is one of the most beautiful on the plateau, and with a wealth of things to see and do, you are going to be left yearning to come back for more. From the stunning Galden Jampaling Monastery of the Sakya Sect of Tibetan Buddhism to the stunning beauty of the many glaciers and mountains that cover the area, there are few things in Chamdo, part of ancient Kham, that will not leave you breathless with awe.

0 Comment ON "Chamdo to Lhasa: how to get to Lhasa from Qamdo"