Chamdo Weather and Climate: when to visit Qamdo at the right time?

Located in the transitional zone between the cold and temperate zone and the wet and monsoon region of the subtropical zone, Chamdo (also know as Qamdo) enjoys a pleasant climate without extremely cold winters and unbearably hot summers. The average annual temperature of Qamdo is around 7.6 degrees. The coldest month of a year is January, with an average monthly temperature of around -2.5 degrees, while the hottest month is July, with an average monthly temperature of 16.3 degrees.

The daily sunshine in Chamdo is long and the sunlight is strong, while the daily temperature variation is high. The annual temperature differences are relatively small, but the weather varies greatly across the different altitudes and regions and the rainfall is concentrated, which gives this region distinctive dry and wet seasons. Tourists can travel to Chamdo via the Sichuan-Tibet Highway or by flight.

January in Chamdo can be a cold time of year, and is the coldest month on average. With temperatures barely slipping above freezing, and dropping down to around -13 degrees, it is only the bright sun that makes it feel warmer. However, with almost no rain at all, and very little snowfall, this is a great time to travel to the area and explore the delights it has to offer.

February sees the snow coming down a little harder, but with a slight increase in temperatures, giving rise to a much better month overall. With temperatures averaging only around -6 degrees, February is still cold though, but with clear skies for most of the month.

March is much warmer, with maximum temperatures getting up to around 4 degrees, and the average topping around -3 degrees. The rain does increase to around 9 wet days throughout the month, and around 12 centimeters of snow. 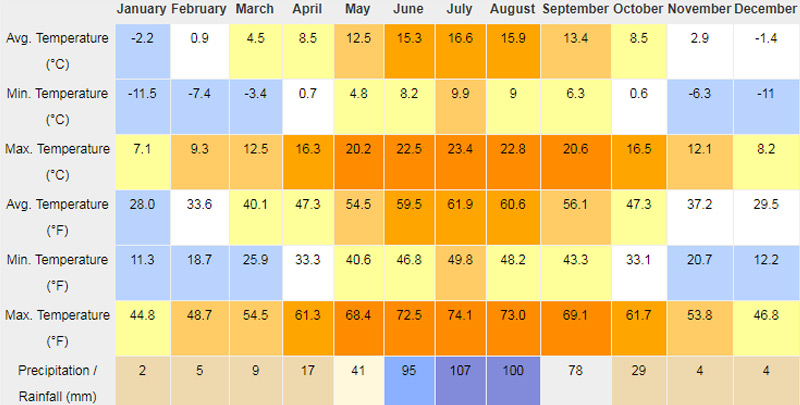 Here we have collected the detailed info on Chamdo temperature and precipitation for your reference.

May sees a little more rain in Chamdo than previously, with around 44mm throughout the month. However, the warmer weather also reduces the snowfall to almost nothing, with daily maximum temperatures of up to 12 degrees and an average monthly temperature of 4.4 degrees, making it much more pleasant for travel.

June is the start of the rainy season in Chamdo, though rain is rarely heavy and hard, with only 94mm falling through the entire month. Temperatures soar to an average of around 8 degrees, and peak somewhere around 14 degrees in the daytime.

July is the hottest month of the year in Chamdo, with highs of around 15 degrees and an average temperature throughout the month of as much as 10 degrees. Nightly temperatures are no longer below freezing, but can still be chilly. It is also the wettest month, with as much as 116mm of rain falling throughout July.

As the rains begin to die off, at only around 100mm in August, temperatures also take a little dip. With highs of around 14.4 degrees and an average of around 8 degrees, August is a great month to visit the area, though it can drop to only 2 degrees at night, making it a little chilly.

September is the last of the monsoon seasons, though there barely seems to be much of a monsoon across Chamdo. Temperatures drop a little more, reaching freezing at night and averaging just 6 degrees through the month. However, the days can still get as high as 12 degrees, and with the higher sunshine, makes it feel much warmer than it really is. Snow is more frequent in the higher areas as well.

October sees Chamdo coming back to its cold and drier period, with average temperatures of just 1.6 degrees, though with only around 34mm of rainfall. Snow is starting to fall more frequently, especially on the high grounds, reaching as high as 28cm of snowfall across the month. But the sunnier days and maximum temperatures of up to 8 degrees make it comfortable during the day.

November and December are similar months, with similar temperatures of between -4 and -6 degrees, on average. High temperatures barely get up to 1-2 degrees in the daytime, and at night, -12 to -16 degrees is common. Rainfall is negligible, and while it may be colder, there is actually less snow, with around 14-15cm for each month.

The last day of the long Losar celebrations in Chamdo, the Butter Lantern Festival falls on the 15th day of the first month in the Tibetan calendar, and is the high point of the annual celebrations. Known as Chunga Choepa, the festival features thousands of butter lamps that are hand-sculpted by the Tibetan monks to be lit in reverence to the twin miracles of Buddha at Sravasti in India. 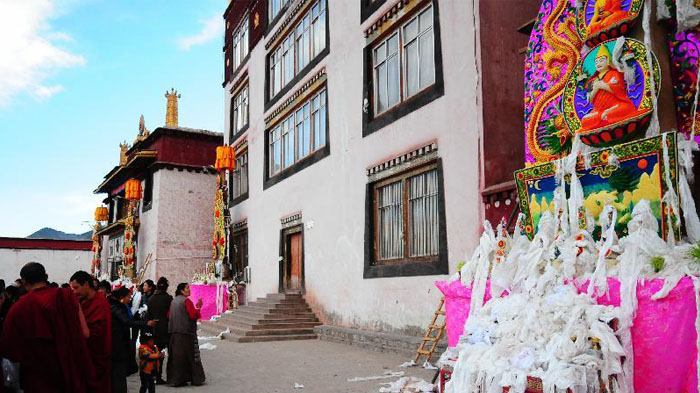 Traditionally held on the 15th day of the sixth month in the Tibetan calendar, the Zhongque Festival in Chamdo is held in its biggest form in Riwoqe County. The oldest of the area’s traditional festivals, it is a major festival today for both religious and business activities, and was begun to celebrate the establishment of the main hall at the Chajiema Monastery in Dalong, a major Gelug monastery in Chamdo.

Chamdo Horse Racing Festival (May to August, depending on location)

Horse racing festivals are common in Tibet. In Chamdo, they have been held for a long time since the throne was won by the hero Gesaer, who defeated all his rivals at a horse-racing festival, riding a horse with no saddle. Today, the festival is just as wild and exuberant, featuring horse races, archery, shooting at a gallop, picking-up a hada scarf on gallop, speed racing, demonstrations of horsemanship, and acrobatic riding.

The word “Saley” literally means “going for a picnic”, and from May to June in Chamdo, families take bedding, several days worth of food, and their tents, and head out into the countryside to relax. They set up their tents in groups, and enjoy the company, the food and drinking, and the horse races and other games, and only head home when they are fully sated. 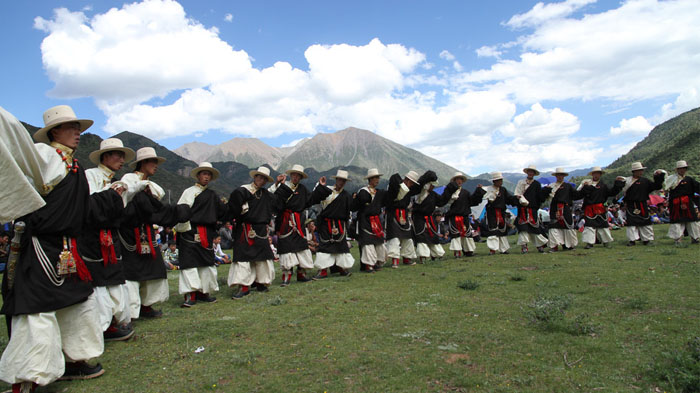 Under the blue sky and white clouds, locals are dancing together to celebrate Saley Festival in Chamdo.

April to May or September to October is the best time to travel along the road from Sichuan Province in Southwest China to the Tibetan capital via Chamdo. The Sichuan Tibet Highway is the overland route from Chengdu to Lhasa, and splits in two, the northern route heading up into the Hengduan Mountains to take you through Chamdo before heading up to Nagqu and then on down to Lhasa.

Similar to the Sichuan Tibet Expedition, the Yunnan Tibet Overland Adventure takes you from the provincial capital of Kunming, the lower reaches of Yunnan Province in southwest China, and follows the G214 national road north, through the Hengduan Mountains and some of Southwest China’s most outstandingly beautiful countryside. Passing through Shangri-La, the route continues on up to Markam, where it joins the G318 Sichuan Tibet Highway, and turns left to follow that route to Lhasa.

What to Wear for Chamdo Travel

Chamdo is not a place with extremely bad weather, and is often classed as cool and dry, though areas do get below freezing in the winter months. You should bring the following:

T-shirts and long sleeves to cope with the daily changing temperature
2-3 sweaters for cooler evenings and nights
Fleece or down jacket for when it gets cold in the daytime
Windproof and waterproof pants
Warm undergarments, as it can get chilly even in the height of summer
Rugged hiking boots or shoes for the rough rocky ground
Warm breathable socks
Enough toiletries for the entire trip
Moisturizers and sun block
Lip balm and sunglasses
Hats for both sunny days and cold days

Chamdo is not like most of Tibet. It is neither as warm and temperate as Nyingchi nor as cold and harsh as Shigatse and Ngari. However, it is a place where one can get out and visit the local people of the ancient Kham region without getting too cold or too hot, and the cool dry air can be more comfortable, especially in the summer months. This stunning part of the Tibetan plateau is one of the least visited areas of the TAR for international tourists, and you can feel a little like Joseph Rock when he made his journey to Tibet almost 100 years ago.

0 Comment ON "Chamdo Weather and Climate: when to visit Qamdo at the right time?"