Located at the north bank of Yarlung Zangbo River, Nyingchi Prefecture is in the east part of Tibet. As the lowest altitude in Tibet, the average altitude of Nyingchi area is around 3000 meters.

Influenced by the terrain of the river valley, the climate of Nyingchi is mild and humid. Since there is huge height difference in the river canyons, from 2200 meters to almost 4700 meters, there are different climate zones appearing in the valley, such as subtropical climate, temperate climate, humid climate, and semi-humid climate.

The annual temperature of Nyingchi is 9℃ with the annual rainfall of 679 mm. In the Nyingchi area, the four seasons are distinctive, but it is not too hot in summer and not too cold in winter. Even in winter, the average temple is above 0℃.

When you plan a trip to Nyingchi, you need to know that from May to early October is the rainy season. You need to prepare waterproof gears when traveling to Nyingchi during this period.

The heavy rainfall in the summertime may cause geological disasters, such as landslides and debris flow. So it is not recommended to take the overland tour from Sichuan to Tibet via Nyingchi during the rainy season. But in general, it is suitable to visit Nyingchi city all year round. Here is Nyingchi climate date table for your reference. 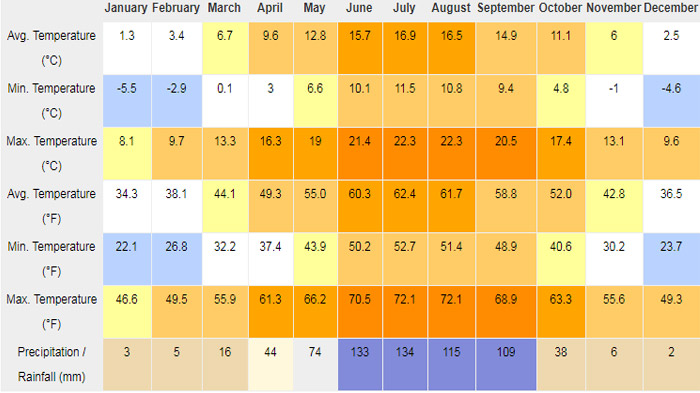 The monthly average temperature and precipitation of Nyingchi.

The winter of Nyingchi is not as chilly as that of other places in Tibet, especially those remote areas in western Tibet. It is warm and comfortable. Though it snows during the cold months, the average temperature is still above 0℃. The snow falls gently, covering the colorful roofs of the local Tibetans’ houses like a thick quilt. It's hard to imagine that you don't feel cold when you look at the local villages in this snow scene, but it is a kind of warmth.

The Tibetan New Year in the Tibetan calendar usually falls in February. It is the best time to experience the local Tibetan culture while traveling to Nyingchi during the New Year. During the festival, people of local villages near Draksum-tso Lake will hold traditional events to wish for the peaceful and harvest in the New Year.

One of the most popular festivals here is the Nyingchi Peach Blossom Festival, which generally starts from March and ends in the early April every year. In March, when it becomes warm, the peach blossoms in Nyingchi begin to bloom. Against the blue sky and the silver snow mountains, the pink peach blossoms form a fascinating and beautiful picture that you can just see here. 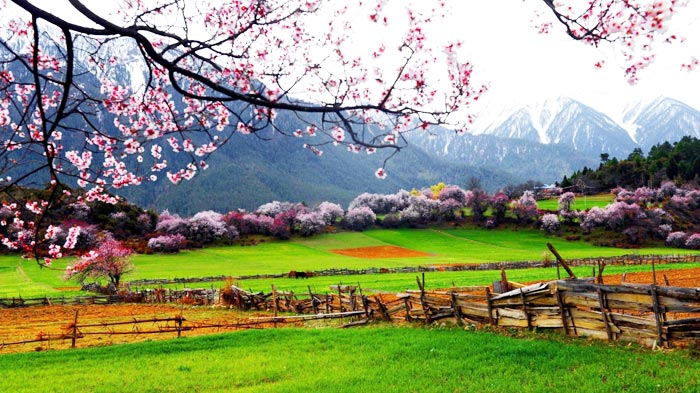 The annual Nyingchi Peach Blossom Festival is held at the side of Niyang River on March 15th. During the festival, the local government will organize a variety of activities, such as folk song and dance performances, and archery competitions. It is the perfect place for you to travel Tibet in spring, where you can enjoy the sea of flowers, take great photos and experience the Tibetan cultures.

April is the beginning of spring sowing. At this time, the peach blossoms have not faded, and the new sprouts in the field have added green to this pink world. When you see the local Tibetans wearing the traditional Tibetan costumes are farming in the fields, you will feel the vitality of spring.

In May, you will enjoy the azalea blossoms in the mountains from Dongbacai Village in the Lulang Flower Sea Ranch to the foothill named Baifengtai. The azalea flowers experienced the baptism of wind and snow in winter, are particularly glamorous with amazing red color.

Also, May is the best hiking season in Yalung Zangbo Grand Canyon. Among all the trekking trails in Nyingchi, the route from Baifengtai to the canyon is the best trekking trail to enjoy the stunning view of mountains of azalea blossoms.

After entering June, the rain has become abundant in Nyingchi area. It is easy to see the clouds wrapping around the mountainsides. And if you are lucky, you can see the rainbow out of the forest. Along the river valley, there are fields full of golden rape flowers, which form an idyllic pastoral scene of the local Tibetan villages. When you visit Nyingchi in June, please don’t miss the chance to take great photos of the river valleys in gold.

In Nyingchi, July is the best time to enjoy the unique matsutake banquet. The mountain areas of Lulang Forest in the Bayi District are rich in matsutake. The Stone Pot Chicken Soup is really delicious with the fresh Matsutake that has just been taken from the mountains and stewed with the local Tibetan chickens in the stone pot. And this matsutake dish is only available here. It will be an extreme experience to taste the deliciously roasted matsutake at the side of Draksum-tso Lake with beautiful snow-capped mountains at the background. 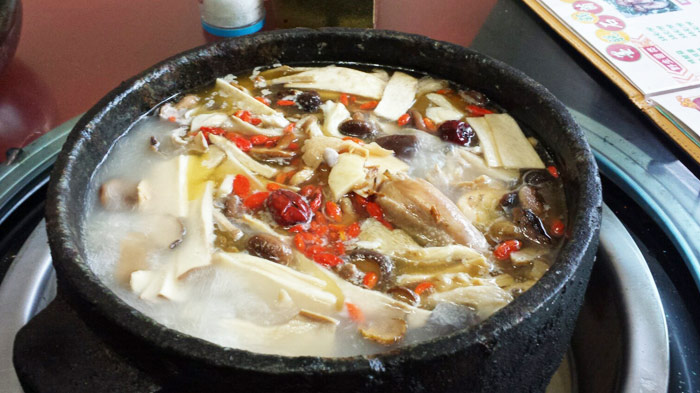 The toothsome Stone-pot Chicken Soup with Matsutake is worth a try when you travel to Nyingchi.

In Nyingchi, especially in Lulang Forest, various kinds of flowers will blossom in August, such as primrose, iris, gentian flowers and so on. It is hard to imagine that there is a pasture full of flowers in the depths of the canyon in Tibet Plateau. Praised as Tibet Swiss, Lulang Forest will be replaced with a brand new color every short period of time due to the different flowering period. In summer, whenever you come to the pasture, you can enjoy different beauty of different flowers.

September is also a good time to trek in Nyingchi, while the whole trekking seasons last from early May to early October. The most recommended hiking routes in Nyingchi for tourists at all levels include Namcha Barwa Mountain Base Camp trek, Holy Lake Nalatso trek, Yalung Zangbo Grand Canyon trek, etc.

September is also the season of harvest. In the farmland along the lakeside of Jieba Village, local Tibetans will hang the prayer flags and sing for the harvest. While you are trekking through the valleys, around the local villages, you can enjoy the stunning natural landscape and explore the local Tibetans’ lifestyle altogether.

The whole Nyingchi turns to gold in October with the leaves becoming yellow. Based on the golden hue, the colors such as brown, red, purple, etc. are laid out along the mountains in the Canyon of Yarlung Zangbo River. Thanks for the fine weather in this month, you can enjoy the breathtaking view of the mountain peaks covered by silver snow under the clear sky and the golden leaves shining in the sunlight. It is a good chance to take photos of the amazing autumn scenery of the Grand Canyon of Yarlung Zangbo River.

After the beginning of winter, the local Tibetans in Nyingchi start to celebrate their New Year. The first day of the 10th month in Tibetan calendar (usually falls on November in the Gregorian calendar), is the new year of Gongbu Tibetan. It is the earliest New Year in Tibet, even in the whole of China. 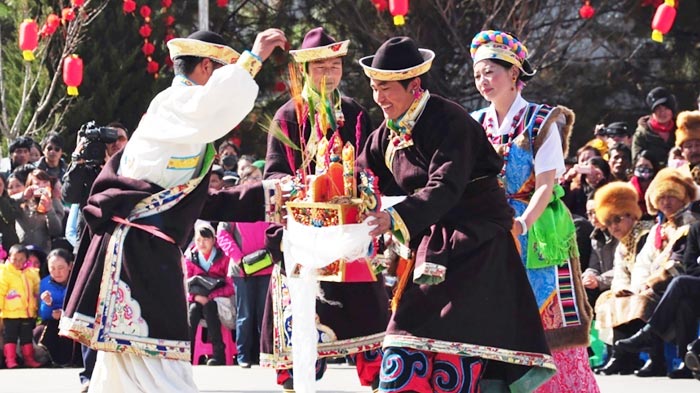 Local Tibetans get together to celebrate the Gongbu New Year Festival with performance.

Gongbu area covers the regions of Bayi District, Milin County, and Gongbu Jiangda Country, which were ruled by the King of Gongbu in ancient times. Nowadays, the local Tibetans still celebrate the New Year in a traditional way. So when you travel to Nyingchi in November, you can experience the unique culture of the local Gongbu Tibetans.

Since the area where the peak of Namcha Barwa is located has a high degree of air humidity and the clouds are haunting all year round, it is not easy to see the mountain peak in spring and summer.

In winter, the peak of Namcha Barwa Mountain is less colored than the autumn, but the snow in the peak is thicker in winter. After snowing, against the blue sky, the silver mountain peak is more spectacular and breathtaking than ever before.

While you are planning your trip to Nyingchi in eastern Tibet, you should notice that there are kinds of travel permits required for your Nyingchi tour.

The most important permit for all Tibet tours is the Tibet Travel Permit. All international tourists traveling to Tibet need to get this permit before entering Tibet, no matter by train or by air. Also known as the Tibet Tourism Bureau Permit, it can be only applied through a local travel agency, because the Bureau doesn’t accept individual applications. Since the procedure takes weeks to go, it is suggested to apply for your Tibet Travel Permit in advance. And we can help you get your Travel Permit with a few simple steps. Once you book your Nyingchi tour with us, just tell us your travel plan and your requirements, we will do the rest for you. 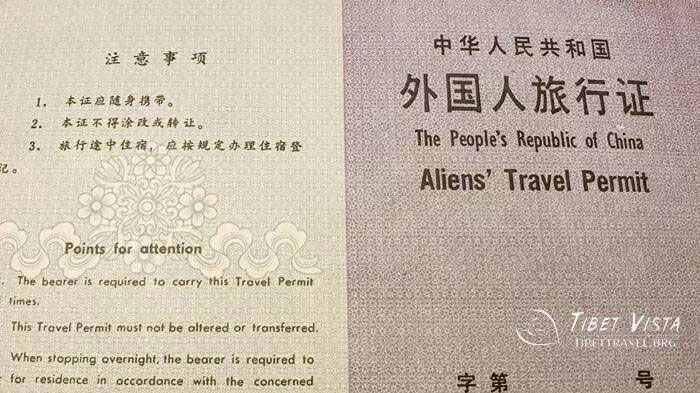 A sample of Alien's Travel Permit.

Notes:
up to now, foreign friends are still unavailable to visit Medog and Chayu in Nyingchi even if you have got both permits. Any interest in other destinations in Nyingchi travel and tour? Please kindly tell our travel guru your travel plan, destination, your group, hotel preference, etc. We specialize in planning your journey based on our first-hand experience, your budget, style, and interest!

What to Pack for Visiting Nyingchi

Travel Documents: Of cause, you need to bring your passport, your Tibet travel permit and the Alien’s Travel Permit with you.
Cash and Cards: Different from Lhasa and Shigatse, there is no ATM machine in Nyingchi and surrounding areas. So it is suggested to carry a certain amount of cash with you.
Clothing and Shoes: It is good to bring some T-shirts, short sleeves, sweaters, hoodie, fleece and long sleeve jacket, since Nyingchi temperature is quite changeable in day and night. A pair of comfortable shoes is quite important for all trips in Tibet. And pairs of breathable socks will make your walking more comfortable.
Raining Gears: It is suggested to take waterproof gears with you, especially when you visit Nyinghi during the monsoon months from July to August.
Daily Necessities: Since the living condition in Nyingchi is not as well as that in Lhasa, you may need to prepare more personal toiletries with you, such as toilet papers and wet wipes.

Compared with other regions in Tibet, Nyingchi has a milder climate with four distinctive travel seasons. And even in winter, the average temperature is above zero.

Generally speaking, Nyingchi is a perfect destination for travel all year round except March. In different months, there are different highlights to experience. And from May to October is the rainy season in Nyingchi. If you are going to visit Nyingchi during this period, please pay attention to the geographic disasters and prepare waterproof gears in advance.

For a Nyingchi tour, you don't need to prepare too much luggage, but enough personal toiletries and cash with you.