What to Do in Lhasa for Family Tour

Traveling to Tibet with kids used to be an inconvenient option, as the region was not very well set up for accommodating children. However, that has changed immensely over the last ten years, and now it is just as easy to take your kids to Tibet as it is for you to go.

Why You Should Travel with Your Family to Lhasa?

For kids, Tibet is an exciting and unparalleled adventure to the roof of the world, with the most popular place to visit being Mount Everest. However, it is not always possible to visit the world’s highest mountain, and for those families that cannot make that long journey, the best options are a tour of Lhasa, the Tibetan capital city, and the surrounding area of Lhasa Prefecture.

Traveling with your children gives them a chance to experience the world outside their normal comfort zone, in places where the culture and people are very different to their own and allowing them to see that there is more to the world than their small sphere of experience so far. It is an eye-opening journey of discovery for kids, and one that leaves a lasting impression on a young mind.

Family tours in Lhasa and the surrounding area are specifically designed with the kids in mind, to give them a true feeling of Tibetan culture and to experience the things that Tibetan children take for granted as everyday things. And nothing leaves a bigger impression on a child than to see the local children doing something they have never seen before.

Tibet has a very unique cuisine, and it is not to everyone’s taste. However, with the still-developing taste buds of a child, the adventure of tasting foreign food is an unusual and unique experience, and there is more likelihood that they will be able to adapt to the local cuisine in Tibet than their parents. 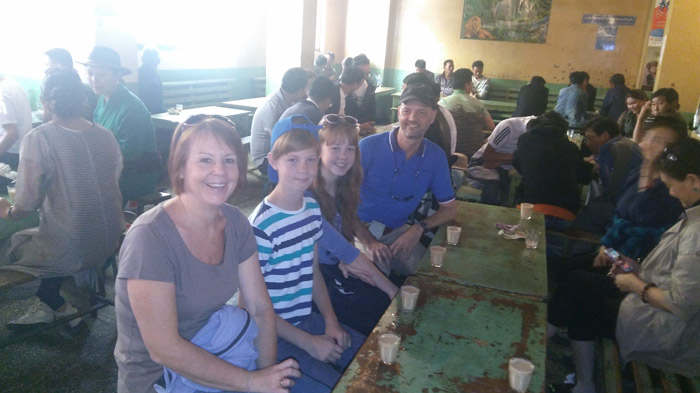 Teahouses and restaurants abound in Lhasa, and the teahouse culture of the people of this stunning city is something akin to the coffee-shop culture in America. Teahouses in Lhasa are the best places to experience the delicious Tibetan Sweet Tea or the local Yak Butter Tea that Tibet is famous for. For Tibetans, the days does not usually start until; they have had their first cup of tea, and it is drunk throughout the day, often even taken instead of drinking water.

Teahouses are also well known for their tasty Tibetan snacks, such as tsampa, momos, Tibetan noodles, soups made from yak meat, and many other delicacies. There are also many restaurants in Lhasa that serve authentic Tibetan foods, though if it is not to your liking, there are also foreign restaurants, and even a pizza restaurant in the city.

Well known for being the center of Lhasa pilgrimage, Barkhor Street is more than just the kora route around the sacred Jokhang Temple. One of the city’s busiest shopping streets, it is filled with a myriad of shops and stalls that sell everything from local crafts to stunning thangka paintings you can take home with you. But even if you are not there for the shopping and the pilgrimage, there is something enticing about this street that makes you want to take a stroll along its length. This ancient city street has been the path of the pilgrims around the Jokhang Temple for more than a thousand years, and its polished flagstones are the result of millions of feet treading its length. A place of spiritualistic aura, the religious significance of this street can be felt by everyone, whether Buddhist or not. Just remember to walk clockwise around the street, out of respect for the pilgrims and local Tibetans beliefs. 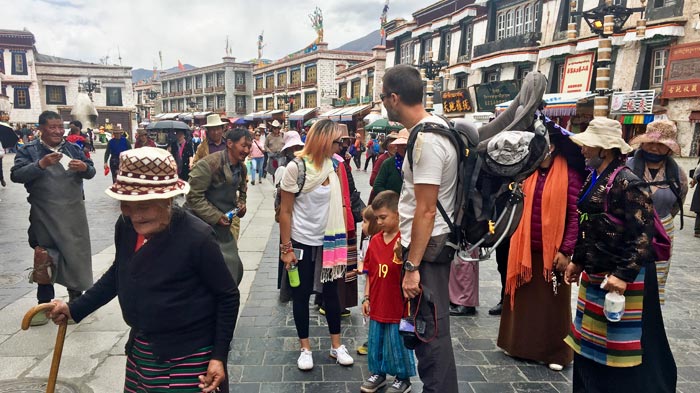 Strolling along Barkhor Street to experience the local culture

Thangka painting is a quintessential part of Tibetan Buddhism and has its roots in the ancient Tubo Kingdom of the Tibetan king, Songtsen Gampo. And for those interested in exploring this delicate art, there is a thangka workshop in Lhasa where you can see the thangka paintings taking shape, and even try your hand at some painting. Thangkas are a Tibetan Buddhist ideology of representation of the Buddhist deities through paintings that show them in a variety of poses. The paintings are done on a canvas or silk scroll, and the paints are made with natural minerals in the same way they have been for centuries, keeping the traditions of this unique art alive. It is the natural mineral paints that produce the bright and vibrant colors of the thangkas and last for hundreds of years. 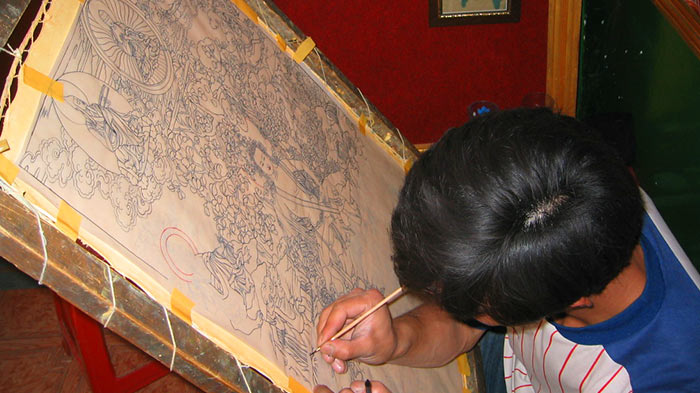 Lhasa is a city with more than one Buddhist site, and with several places to see, it takes a few days to get around the major ones alone. One of the most popular places to visit in Lhasa is the Potala Palace, the former seat of Tibetan government and the winter palace of the Dalai lama. There are hundreds of steps that lead from the city to the palace, which sits on top of Red Hill overlooking the city. It is an iconic symbol of Tibetan culture and is one of the best places to tour in the city. 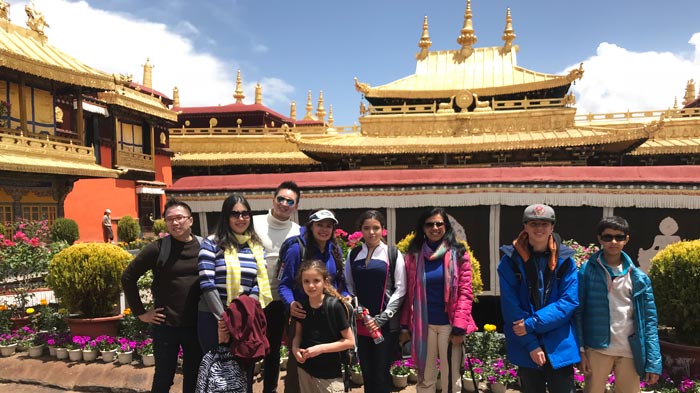 The most sacred temple in Tibet, the Jokhang Temple is more than 1,300 years old, and was built by the Tibetan king for his two wives. A sacred place of worship, it has an aura of reverence about it, and the peace and tranquility inside the temple is enough to ease the mind and leave pleasant memories within. The temple is the center of Tibetan Buddhism, and the site of may thousands of pilgrimage journeys that end at the temple gates. Tibetan pilgrims travel hundreds of miles to prostrate themselves in worship at the gates of the temple and walk the kora route around Barkhor Street.

Sera Monastery is one of the many monasteries in Lhasa prefecture, and one of the Great Three Monasteries of the Gelugpa school of Tibetan Buddhism. Sera is Tibetan for “wild rose”, and the monastery took its name from the wild roses that grew on the hillsides around the site of the monastery during its construction. For tourists, the monastery is most famous for its philosophical and theological debates on Tibetan Buddhist scriptures, which are a way of training the novice monks in the art of debate and understanding of the scriptures to attain a higher level of study. The debates are held daily in the debating courtyard every afternoon and are one of the most exciting aspects of Tibetan monastic visits. The debates are punctuated with a series of physical gestures that liven up the debating enormously, and each gesture has a defined meaning. This kind of debating is not solely restricted to Sera Monastery but is used more there than anywhere else.

Every culture has its own style of retaining and storing the artifacts and history of its past, and museums are the normal place for this. And with the yak being such an important part of Tibetan life and culture, it is of little surprise that there is a museum dedicated to the yaks in Tibet. Located in Lhasa, the Yak Museum opened in May 2016, aided by funding from Beijing. The yak is one of the most important symbols of Tibetan culture, and the museum explores the origins of the yak in Tibet and the style of yak culture that has pervaded the plateau for thousands of years. Split into three distinct parts, the exhibits show visitors the natural and scientific aspects of the yak, the historical and humane use of yaks in Tibetan nomadic culture, and the spiritual side of the yak, including Yak Artworks. The museum is free to the public, and is open daily from Tuesday to Sunday, with Monday being closed. 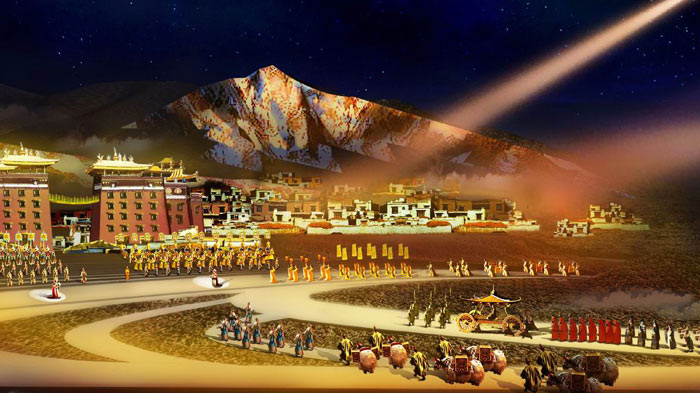 Another of the cultural delights of Lhasa is the renowned Princess Wencheng musical drama. Held regularly in the city, the musical is in the style of a traditional Tibetan opera and tells the story of Princess Wencheng of the Tang Dynasty. Known in Tibet at the time as Gyasa, which means “Chinese wife”, she was sent from the Tang Dynasty in China to be the second bride of the Tibetan king, Songtsen Gampo. The princess carried with her from China the statue of the Sakyamuni Buddha at the age of twelve, which still resides in the Jokhang Temple, and is regarded as the most revered statue of Buddha in Tibet. Jokhang was built for her as a place for her to practice her Buddhist beliefs.

Spend the Leisurely Afternoon for a Picnic with Locals in Norbulingka

Norbulingka Palace, the former seat of Tibetan governance that took over from the Potala palace in 1755, is one of the most stunning examples of man-made gardens in the world. Located on the western edge of Lhasa, the palace was once the summer palace of the Dalai Lama, and is known in English as the “Park of treasures”. One of the largest sites of Buddhist significance in Tibet, the palace has a huge garden park that covers more than 360,000 square meters. 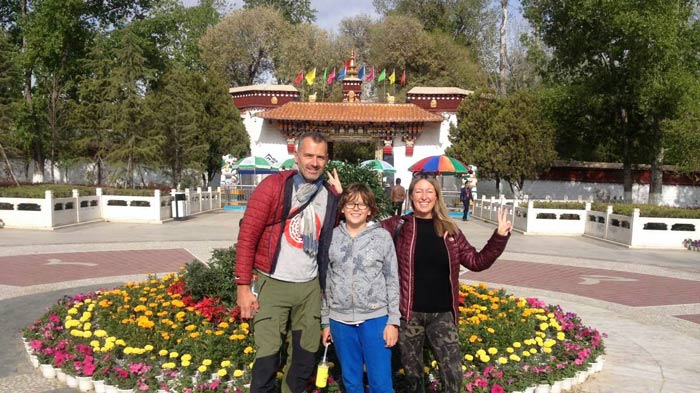 Filled with a multitude of plants and trees of various types, the park is known as the “oxygen bar” of Lhasa, due to the vast amount of plant life that resides there producing oxygen from carbon dioxide. One of the popular activities of the Lhasa locals during the summer is to picnic in the peaceful and tranquil grounds of the park, and stroll along the many paths that wend their way through this stunning garden.

Visit Tibetan Family in Nearby Village

Staying with a Tibetan family, in a small village like Trubshi, near Ganden Monastery, you can take part in their daily lives and find out more about how they live. Tibetan life is often very simple but does involve Buddhism in every aspect of their lives, from cleaning the house and cooking meals to daily prayers and worship. You can even stay overnight with a Tibetan family, or in one of the small local villages, living the way the locals do.

Lying to the southwest of Lhasa, Lake Yamdrok is one of the Great Three Holy Lakes of Tibet, and is held as sacred in Tibetan Buddhism. A freshwater lake in an area where saline lakes are prevalent, Lake Yamdrok is shaped like an ancient Chinese character, and is made up of many lakes all linked by channels and waterways. Surrounded by mountains on all sides, the lake is a popular tourist attraction on the road to Shigatse, and the view from the pass above it as you crest the rise is tremendous. The lake’s waters are a distinct turquoise color, which reflects the sunlight in an unusual manner, often casting multi=hued ripples across its surface as the wind blows on the waters. Lake Yamdrok is one of the highlights of any tour to Tibet and can be easily visited from Lhasa in a single day.

>> How to Choose the Travel Route for the Family Tour with Kids in Tibet
>> Common misunderstandings about family tours with kids in Tibet
>> Daddy, Please Take Me to See the Highest Mountain in the World
>> Tibet Family Tours with Little Kids
>> Unforgettable Journey to Tibet with Your Family

0 Comment ON "What to Do in Lhasa for Family Tour "