Tibet offers breathtaking and awesome monasteries, incredible, high mountain treks, fabulous and touching view of the world’s highest mountains and here you will meet the most likable and friendly people. Tibet is a unique, religious and spiritual place.

When you feel and things seem to be in their exact and proper place, then it’s time to pack your bag to Tibet for some unique, peaceful, precious and fleeting moments. Regardless of the overwhelming pace of progress and a calming political circumstance, supporting everything is the Tibetan people, whose bliss and dedication remain profoundly inspiring.

Tibet is a place that will probably change the way you see the world and stay with you for quite a long time to come. What's more, is the meaning of the absolute best sort of travel. Today we will talk about the top 5 Tibetan off-the-beaten-track monasteries that are "must to see" for each traveler coming to Tibet. 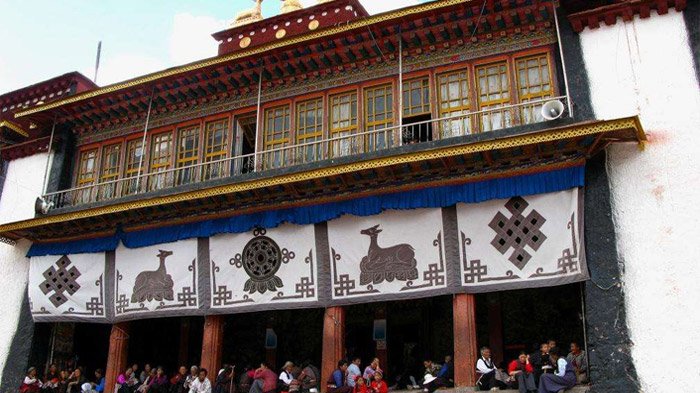 The monastery is located in Malashan Mountain, Chamdo, Tibet, China. It is over 1400 km from Lhasa and takes almost 2-3 days to reach the monastery from Lhasa in a car.

It was built in 1444 by one of the TsongKhapa's followers, named the Jampaling Monastery (Chambaling Monastery). It is situated on a high plateau where Ongqu and Zhaqu Rivers meet and converge into the well-knownLancing River in Chamdo Town. It houses the Gelugpa Sect which is attached and belongs to Tibetan Buddhism. Built as the principal monastery of the Gelugpa Sect in Kham territory, Jampaling Monastery has a rich history of almost around 540 years. It has the Main Assembly Hall, The Tara Hall, the Guardian Hall, the Sutra Debating Hall and 12 Zhacangs which are basically sutra schooling schools.

From the rule of the fourteenth abbot, the Reincarnation System of living Buddha was adopted. Ever since, there has been five principle living Buddhas. Since the rule of Emperor Kangxi of the Qing Dynasty (1644-1911), those living Buddhas have been altogether presented by the central government. Today, a bronze seal, a plaque recorded with 'Gandan Jampaling Monastery' conceded by Emperor Kangxi and another plaque presented by Emperor Qianlong is as yet preserved here. In its Golden Age, this monastery housed around 5,000 monks and 70 little religious monasteries.

The most attractive and celebrated highlight here is the Holy Dance, just performed during the Butter Lamp Festival that praises the triumph of Sakyamuni against the blasphemers in a religious argument. The celebration falls on January fifteenth of Tibetan schedule. Amidst the celebration, the monks wear brutal masks and play out this religious dance to exorcize the phantoms, ghosts and to appeal to God for a good harvest for the year. Many famous Buddhist sculptures and figures of hierarchs, brilliant wall paintings and Thangkas in the monastery are additionally worth visiting. 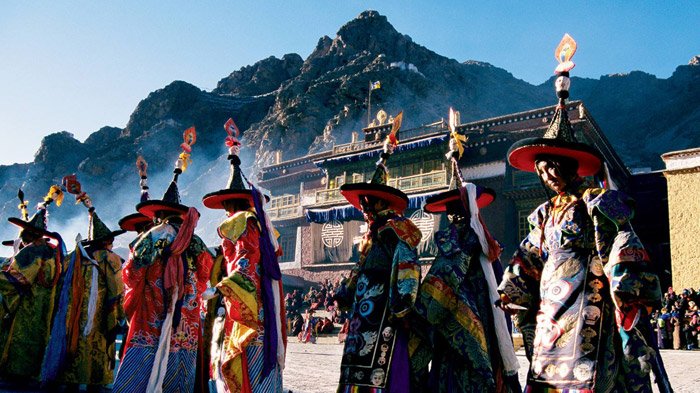 Things to do GaldenJampaling Monastery

1. You can take pictures of the monastery and the monks their but only with permission.
2. You can see two emerging Ongqu and Zhaqurivers, standing on the top platform of the Galden Jampaling Monastery.

Summer and autumn are the best time to visit this place, but for the travel lovers every day and every time work.

RiwocheTsuglhakhang was established in 1276 by Sangye On, who moved to Kham after the passing of his lord SangyeYarjon (1203–72), the third leader of the Talung family. Riwoche began as a branch of Talung Monastery in Ü. In the end, it developed to shroud its parent religious community and it now positions as one of Tibet's most amazing and impressive monasteries. It holds the trademark red, white and dark vertical stripes of the TalungSchool, and is also home to more than 500 monks. The fundamental fascination in Riwoche is the huge Tsuglakhang Temple, situated in the northern part of the district. The monastery is built in a square and is unlike the other monasteries in Tibet. The walls are 20m high. This religious place is painted in the conventional shades of red, white and dark. Prayer wheels line the outside of the religious community where travelers come every day to pray. The construction of this monastery started in the thirteenth century. There are presently more than 500 monks living in this place. 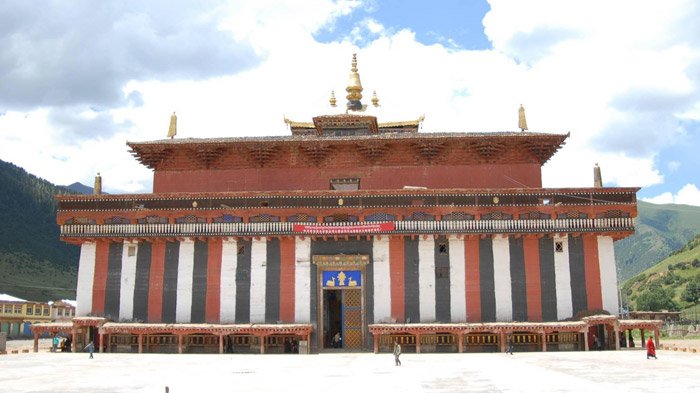 It is located 29 km north of the small town of Ratsaka (also known as Riwoche Town), and 134 km west of Chamdo in Kham. It is at an altitude of about 3,400 meters in a fertile valley containing the Dzi River, a tributary to the Mekong River. It is around 990 km from Lhasa and takes around 22 hours by car to reach the destination from Lhasa.

The main attraction for tourists and local people in Riwoche is this amazing and beautiful historical Riwoche Monastery. This place is full of natural beauty and the local people, mostly live in houses made of wood.

How to reach Riwoche Monastery

Riwoche sees not many tourists since it is so remote and a full tour incorporates travel permit, travel guide and a private vehicle to reach the territory. Getting to Riwoche needs minimum 10 days from Lhasa.

The monastery was constructed confronting the east to display a gathering of the Tibetan calendar and Tibetan books to demonstrate its unique emphasis. It was important for the monks to learn astronomy, Buddhist scriptures, and the Tibetan lunar calendar, rhetoric, calligraphy, and Traditional Tibetan medicines. It was damaged in 1718 by Mongols and was rebuilt amid eighteenth century under the rule of the seventh Dalai Lama. Once more, it was again damaged amidst the twentieth century. 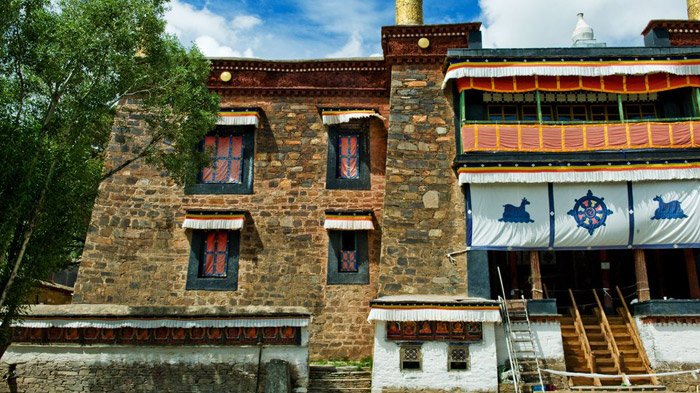 Mindroling Monastery is situated in Dranang province around 100 kilometers southwest of Lhasa and was built up in 1676, which was encompassed by slopes and hills. It takes around 2 hours to reach the monastery from Lhasa.

How to reach this monastery

There are three various ways of getting there. To start with, you may lease a three-wheeled bike in the county, which will cost you about CNY 30.00 net. The second option is to lease a taxi from Zetang; the cost is about CNY80.00 to 100.00 net per car, for four individuals. Or, on the other hand, you may take local transports that depart for Gonggar, Zharang, or Lhasa, and get off at Mindroling Monastery. After reaching there you have to take a local tractor or walk there. It requires an entire day for the visit to Mindroling Monastery.

Where to stay at night

You may also remain one night there if you wish, at the Zharang Hotel, or camp here by yourselves. Also, there are no great restaurants close to Mindroling Monastery, but chophouses. So you should bring a few snacks or even better, some prepared lunch and dinner with you.

The first religious monastery of the Karma Kagyu sect of Tibetan Buddhism was established in the twelfth century by DüsumKhyenpa, the first Karmapa Lama in eastern Tibet at 76 ages. 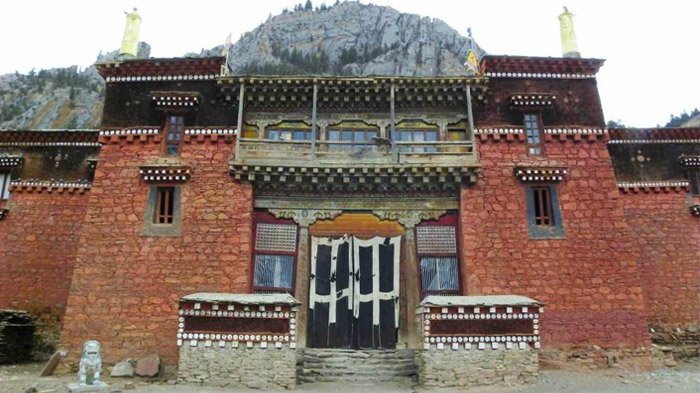 It is situated on the eastern bank of the Dzachu River in Chamdo, eastern Tibet. It is over 1000 km from Lhasa and takes over 22 hours to get there from Lhasa.

Karma Dansa was the cradle and a supporter of the Karma Kagyu pass. When this monastery was established it had accumulated 1000 monks around it here. The current monastery has been ceaselessly enhanced since its foundation, with the support of numerous Buddhist donors. In the mid-1970s, the sixteenth Karmapa remained here for a while, leading exceptional empowerments, offering audience disciples and religious teachings. After some time,the monastery proceeded with the conventional religious education programs and medication practices under his course. After the sixteenth Karmapa passed away, the fourteenth Kunzig Shamar Rinpoche (the second-most noteworthy lama in the Karma Kagyu ancestry, whose duties incorporate recognizing the resurrections of the Karmapas) cared for the religious monastery, later passing it on to H.H. The seventeenth Gyalwa Karmapa, TrinleyThayeDorje. At present, sixty to hundred monks are housed in the religious place. 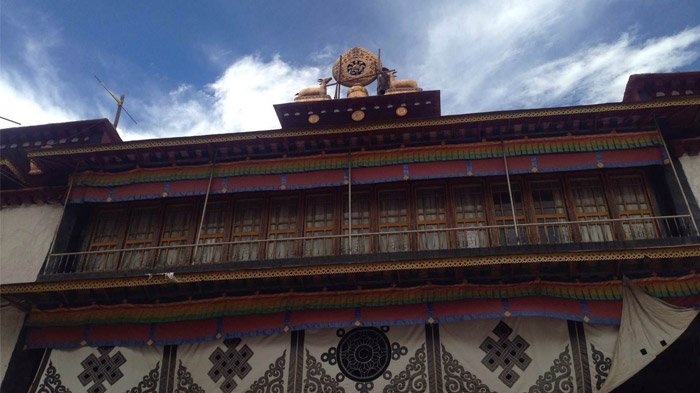 The monks here have been engaging in rituals and daily prayers. People following the religion come here from all over the world.

The Zandan Monastery which is situated in the Suoxian County of Nagqu Prefecture is famous as the "Little Potala Palace" in Tibet. This monastery was built in 1668, thus this monastery is the earliest temple of the Gelug Sect of Tibetan Buddhism and the greatest old Buddhist complex in northern Tibet. As per a legend, SengjanDrumo, the supreme concubine of the great Tibetan King Gesar in the epic, was born in the religious place. The Zandan Monastery, which was based on the highest point of the Yaladuo Mountain, looks very much like the Potala Palace and is also called the "Little Potala Palace". It has around monks now. 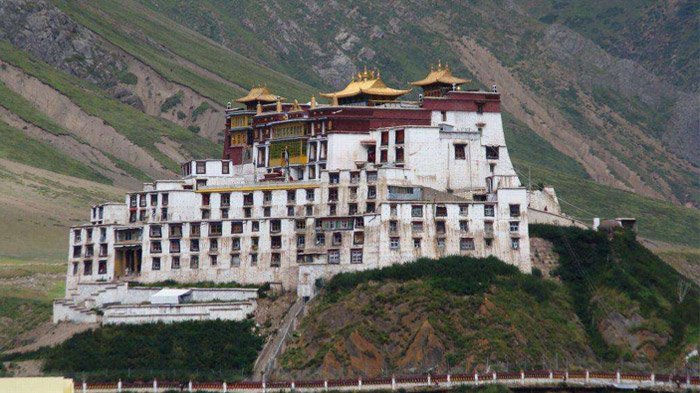 Zandan Monastery is located in the No.4 Village of Yala Town, Suo County which is the hometown of concubine of Gesar King. It is about 220 kilometers away from downtown of Nagqu. It is a monastery of Gelug Sect, as well as one of four largest monasteries of Suo County. The whole monastery covers 25975.5 square meters. It is about 700 kilometers from Lhasa and you need to keep around 16 hours in hand if you are looking for travelling from Lhasa to here by car.

When you visit this holy place you will find many statues of Buddha’s, Buddhism scriptures and frescos. The golden roof of this monastery and the mesmerizing view attract every visitor. It is surrounded by natural beauty and is located at the foot of the mountains. 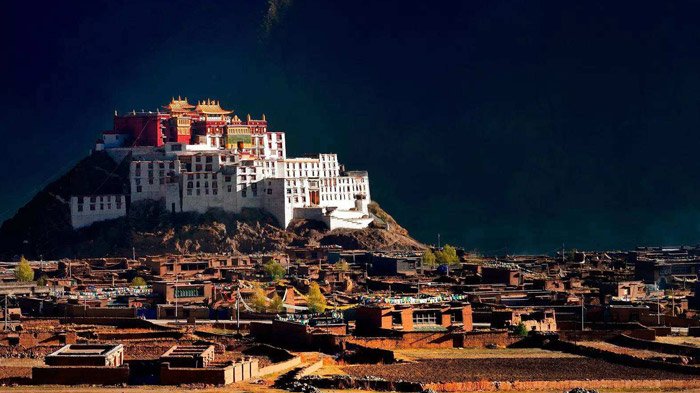 In the thanking God festival you can see the religious dance in which about 80 monks participate. This festival is not only enjoyed by the monks housed there, but also the visitors and monks in Su County. In December, May and July, the prayer festivals and many other festivals are also celebrated by the monks and people all around the towns and the monks gather in this monastery and become a part of these wonderful festivals.

Best time to visit the monastery

The weather varies in different parts of Tibet so before you plan your trip make sure you are aware about the weather here. Then, according to the weather, pack your bag. But the best time to visit here is summer and spring .