August is the golden time to travel in Tibet, especially to northern Tibet. The natural scenery of lakes and mountains are in their best state. Whenever you travel to Tibet in August, you can appreciate the beautiful scenery and experience the characteristic Tibetan lifestyle. And the grand festivals in August allow you to feel the Tibetan enthusiasm and lively atmosphere.

Though it can be crowded and cost you a bit more, the Aug. is one of the most colorful and pleasant time for travel. Here's what you need to know about traveling to Tibet in August.

The Tibet weather and climate in August reach its peak for the year. The cool climate here makes Tibet one of the best summer resorts in China. It may be extremely hot in other cities of China during this month, but the high altitude of Tibet makes it quite cozy. The average temperature in Tibet ranges from 9 °C to 25 °C. In Lhasa, on average, the maximum temperature is 21 °C, while the minimum is 10 °C. 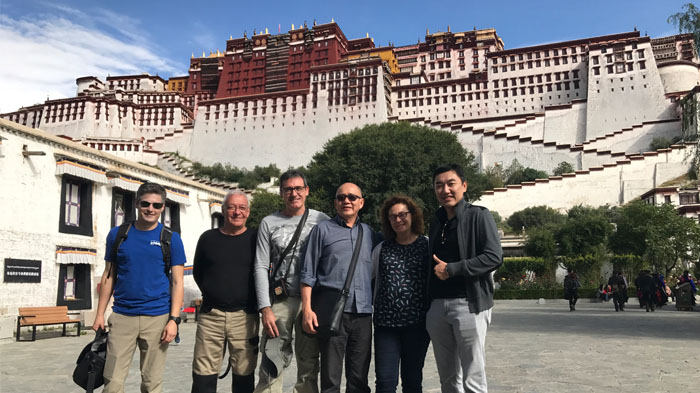 August is one of the best time to visit Lhasa.

The further you travel away from Lhasa to the west or north, the lower the temperature drops. August is also the rainy season in Tibet, but it usually rains at night. And the temperature between day and night varies greatly. Bring a coat and long jeans for the higher elevations and cold nights, and also bring summer clothes for the warmer days. If you travel to Mt. Everest or Ngari, winter clothes are sometimes still necessary.

The summer month of August is renowned in certain parts of Tibet to be much higher in the average oxygen content of the air. The increase in vegetation in the summer monsoon months means more oxygen is released into the atmosphere, and while it is not much overall, it can make a little difference in your ability to acclimatize to higher altitudes. And with more comfortable temperatures, you are certain to have an amazing time in Tibet in August. - Check the weather of Tibet in all seasons.

Packing for a trip to Tibet in August is not too hard, and you can dispense with most of those winter woollies for this month of the year. Warmer climes mean lighter clothing, though it is still a good idea to have some warmer sweaters and jackets for those cooler evenings. In general, you should include the following in any August packing list:
Identification: Passport, Tibet Permit.
Clothes: light long-sleeved clothes, down jacket, outdoor jacket, waterproof shoes and jacket, light pants, warm socks, and good hiking boots, even for those not hiking.
Articles: umbrella, sun cream, sunhat, sunglasses, lip balm, moisturizers, toilet paper
Others: camera, local currency cash, washing supplies

Highlights of Festivities in August

August is believed to be the best month to travel in Tibet mainly because it is the festival season with Tibetan outdoor festivals and sport competitions such as horse races. Festivals of note include the Shoton Festival and the Nagqu Horse Racing Festival. A large number of tourists would rush to Lhasa to experience the festive atmosphere of Shoton Festival when the religious celebration reaches its climax.

Shoton Festival is one of the most solemn festivals celebrated by Tibetans in a year. It is celebrated to mark the end of the monks' Yarné, their hundred day summer retreat. Shoton festival starts on the last day of the sixth month in Tibetan calendar and lasts for a few days. The 2021 Shoton festival will celebrated from August 8 to August 15. Apart from traditional Buddha unfolding ceremony in Drepung and Sera monastery, dramatic Tibetan opera show, and annual Tibetan Thangka Expo, the 7-day celebration for this year involves International Namtso Lake Trekking, Tibetan music seminar, live commercial concert, and soccer championships.

A giant thangka unveiling in Drepung Monastery during Shoton Festival

The main and opening ceremonies of the festival are held in the famous Drepung Monastery, the former seat of the Dalai Lama, and include a giant thangka unveiling which is attended by thousands of locals and visitors.

As one of the grandest annual event in northern Tibet, the Nagqu Horse Racing Festival, which falls every August in Tibet, will attract Tibetans from every corner of the Tibetan Plateau. The Tibetans are dressed with traditional costumes and decorated in their best clothes. They gather on the vast grassland dotted with all kinds of flowers, and set up beautiful tents to enjoy the horse riding competition, yak race, tug of war, stone-lifting and Tibetan operas. 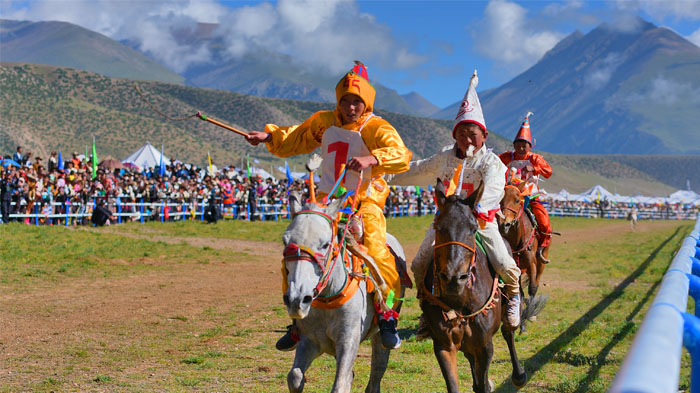 The festival for 2021 begins on August 10, and is one of the most inspiring horse-racing festivals on the plateau. The festival opens with a grand ceremony attended by monks from the local monasteries, and features Cham dances performed by the monks for the spectators.

As one of the most impressive festivals in Tibet, the Ganden Monastery Thangka Festival is generally held on the 15th day of the 6th month in the Tibetan calendar. In 2021, this date falls on July 24. Every year, locals and pilgrims come to the monastery to walk the ritual kora route around the site, and pray at the statue of Buddha inside, before heading out onto the hill behind the monastery to await the unveiling of a giant thangka painting. 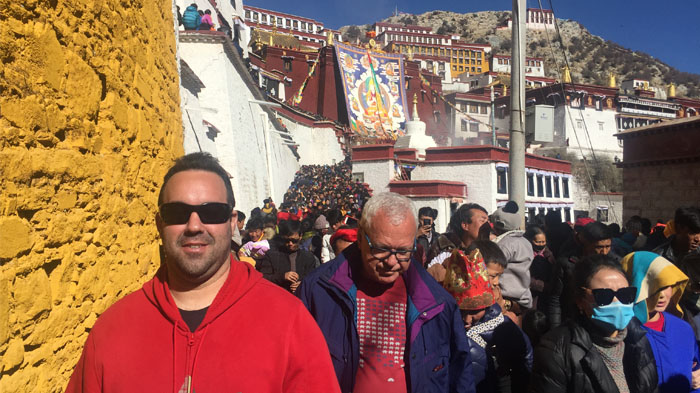 Our clients paid a visit to enjoy the Ganden Monastery Thangka Festival in August.

The huge and colorful thangka is brought out by the lamas, and unfurled on the framework on the hillside, where the viewers will throw hada onto the painting and touch its hem to get the blessings of the Buddha. As one of the most outstanding sights in Tibet, this is one festival that you should not miss out on in August.

Journey from Lhasa to Lake Namtso

There are thousands of flowers in bloom in August and Namtso Lake sits like a blue pearl on this holy plateau. The natural scenery of Lake Namtso in August is an oil painting of a landscape in summer. You will be beguiled by the beauty of the landscapes. It is a fantastic idea to visit Lake Namtso from Lhasa in August. August s one of the best times of year to visit Lake Namtso, as the rains make the surrounding countryside lush and green, but are not heavy enough to detract from the whole experience. 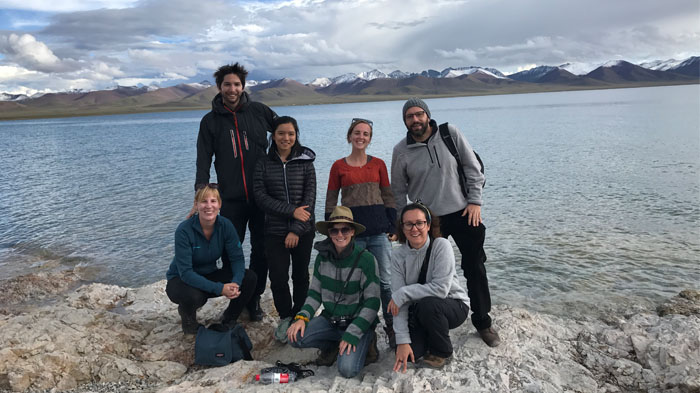 The Classic Tour from Lhasa to EBC

Just like July, August may not be the best time to travel to Mt. Everest because of the rainy season in Tibet. Low visibility, rain, and bad road conditions could hinder your view of the peak of Mt. Everest. But you still could try to enjoy the stunning view of Mt. Everest on the clearer days. And while it is a hit-or-miss affair on whether you will get clouds or clear skies at the summit, it is still an amazing feeling to be stood in the shadow of the highest peak on the planet, a humbling experience. - Check the popular tours to EBC from Lhasa. 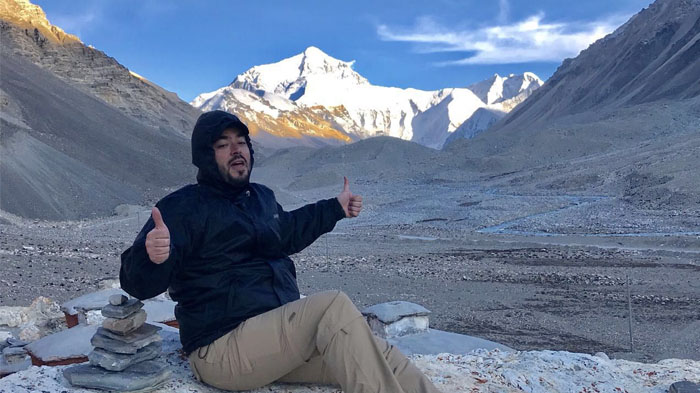 Everest Base Camp is one of the must-see attractions during you Tibet tour.

Travel from Lhasa to Mount Kailash and Lake Manasarovar

Mild climate and high oxygen contents means that August is a great time to travel to Mt. Kailash and Lake Manasarovar, in the remote Ngari Prefecture of northwest Tibet. But it is necessary to bring umbrella or raincoat and warm clothes. The weather in August can be a little wetter than the rest of the year, and you may find that nights are still chilly, though no longer dropping to below freezing. 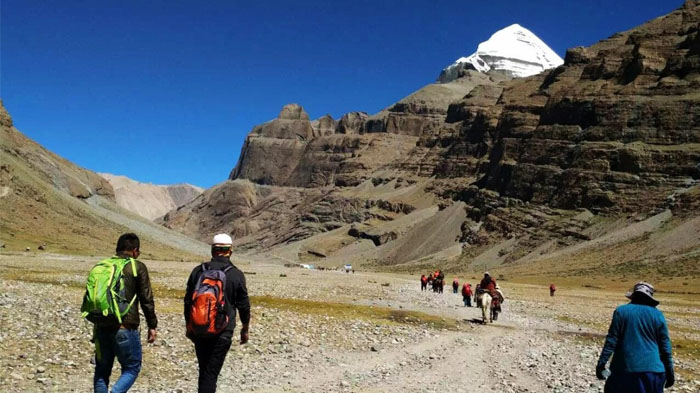 Trekking around the sacred Mount Kailash in August

The kora trek around the sacred mountain is one of the most outstanding experiences on the planet, and while you may find yourself getting a little wetter than if you traveled in May, you will relish the warmer weather and milder climate.

Visit Lhasa and its Surroundings in August

With Favorable climate and temperature, August is one of the best time to travel to Lhasa and he surrounding areas, as it is neither too hot nor too cold. Wonderful scenery leaves a lasting impression on your memories of this stunning summer landscape, and gives you an unforgettable experience of the true beauty of this amazing plateau region. You will not really need much in the way of warm clothing in August, though a light sweater may come in handy for chilly evenings. Similarly, a raincoat or water-proof clothing can come in handy at times. - Check the top things to do in and around Lhasa.

Travel overland from Lhasa to Kathmandu

The amazing overland trip from Lhasa to Kathmandu is one of the most outstanding experiences on the plateau, and there are no better times to take this trip than in August, when the plateau is at its greenest. The height of the lush summer weather, this amazing trip takes you from the wonders of the Tibetan capital, across the beautiful landscape of mountains and lakes, and down into the stunning Gyirong Valley, one of the most beautiful valleys in the world. You also get to stop off at Mount Everest, and can take in some of the most excellent attractions that Tibet has to offer. And you can end the whole thing by dropping down from the plateau to the exotic and delightful city of Kathmandu, capital of Nepal and centre of the Newar culture. 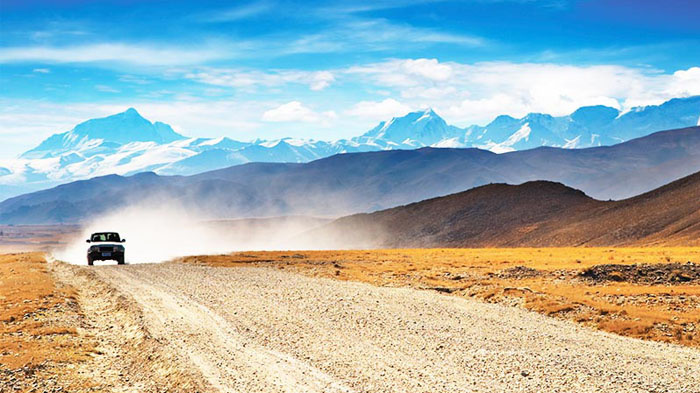 You can enjoy the epic Lhasa to Kathmandu to by overland.

How to Beat Tourist Crowds and High Cost in August?

August is the peak month of the peak season for tourism in Tibet, and you are likely to find that there are crowds of people at the attractions and sites that you visit throughout the plateau region. While it is not possible to beat entirely the crowds of tourists in Tibet, you can avoid them by traveling to some of the lesser-visited locations on your tour, such as Drak Yerpa Monastery , Ganden Monastery, Samye Monastery, etc. Or arrive much early at the attractions before the massive tour groups arrive, in this way you can enjoy the monasteris with less crowds for an hour or so.

And you can cut the cost of travel in the summer, which can be expensive, by joining our Tibet small group tours. This way, you share the higher costs of the guide, driver, and vehicle with all members of the tour group equally, reducing your overall travel costs.

August is not the cramped and crowded time of year that you might think it is, as long as you plan carefully. And with the more pleasant and warmer weather, and the propensity for the monsoon rains to fall in the evening and overnight, this amazing summer month is one of the best times of year to visit Tibet.

0 Comment ON "Travel Tips for Tibet Tour in August"