How to Prevent Sunburn in Tibet?

Tibet ranks first amongst most of the travelers’ choice for a tour in there. The scenic beauty of Tibet, its enigmatic and solemn Buddhist charm can readily sweep anyone off their feet. The high altitude of Tibet and its privilege of being surrounded by lofty mountain ranges also attract travelers. This is mainly because Tibet offers some remarkable trekking facilities and experiences. 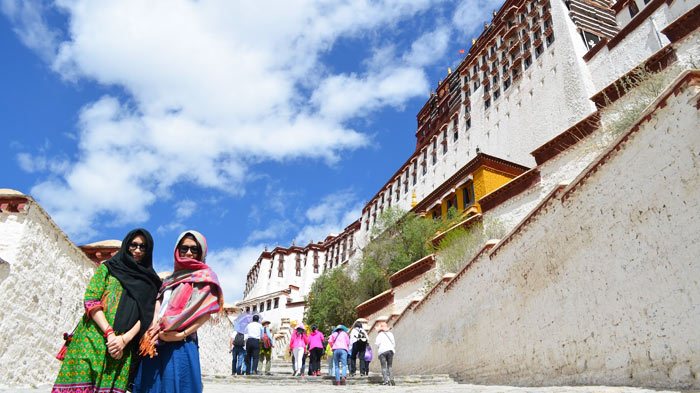 It's advisable to dress in layers while touring Tibet.

However, besides all these charming facets of Tibet, it is not totally imbued with positive aspects. The harsh winter of Tibet mostly prevents the tourism during those months. Moreover at some regions Tibet witnesses a complete year of snowfall and strong gusts of wind. But the real problem of Tibet is its location and atmosphere, most importantly the amount of radiation it faces. Tibet causes enormous sunburns owing to its typical climate.

Though sunburns are often accepted as luxury and trend by maximum foreigners, it can actually pose huge skin problems, leading even to skin cancer. The location of Tibet might turn this minor problem into a major disease. It is located on the Qinghai-Tibet plateau, the highest plateau in the world. As a result Tibet experiences complete plateau weather. It is usually marked by strong winds, sudden weather changes and extreme sun radiation.

The air, especially in Lhasa, being completely clean and moisture free, especially during summers and winters, the radiation of sun increases manifolds. Although this might be a unique aspect of scenic charm because in that bright sunshine everything appears way too bright and sparkling, nonetheless it has its own pangs. The increased radiation of sun increases the amount of UV radiation causing major skin problems including sunburns.

In 2003, a campaign has been made during summer and winter to measure UV radiation in four different regions of Lhasa. The UV was usually measured with multichannel moderate-bandwidth NILU-UV filter instruments. Regions like Linzhi, Lhasa, Mount Milha and Rodog were selected, for having an altitude from 3000 to 5000 m. It was observed that in summer, the UV index has crossed 15 and even 20 in these areas.

At higher altitude, the UV radiation increases at the rate of 35%. During cloudy days, the UV radiation even crosses 30 in these regions and in higher regions it increases 35%. Moreover longer time of sun radiation causes a greater inflow of UV radiation. During the winter time, the UV index was measured to be 15 at an altitude of 5000m. This was 35% more compared to the snow covered land of a lesser altitude. The inflow of UV radiation not only depends on altitude and the time of sunshine but also on the amount of sunshine a region is receiving, presence of clouds and aerosols, stratospheric ozone and surface albedo.

Though sunburn cannot be termed as a skin disease in the initial stage, it might get transformed into a disease if proper measures are not taken or if sun bathing is done in an uncontrollable manner. Biologically it is the condition of the skin when extra melanins are produced to prevent the skin from damage. As a result the area or the skin darkens more than the covered part. It is mainly the effect of excessive exposure to the UV radiation of the sun. 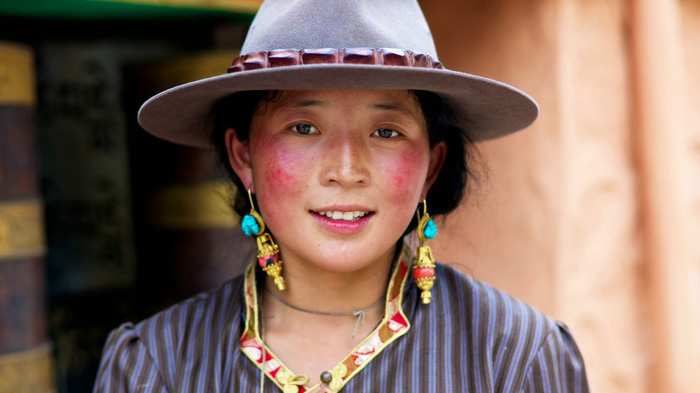 Tibetans usually use big hats for most of the time.

The main symptoms of sunburns are excessive redness of the skin exposed to the sun with high UV radiation, fatigue; the skin is hot to touch, burning sensation, blisters and pain. Sometimes it may cause headache and mild fever. Primarily the excessive radiation might cause tumors which can later get malignant and cause cancer. The symptoms of sunburn can appear in less than fifteen minutes, and they can become unbearable if the skin exposed for more than thirty minutes.

Causes of Sunburns in Lhasa and Other Regions of Tibet

As has already been discussed, Lhasa is situated at a very high altitude of 3650m. As we have already learnt that higher the altitude, more is the index of UV radiation, so this is one of the factors for Tibet for experiencing such high UV radiation which in turn causes sunburns. Lhasa along with other regions in Tibet like Nyingchi, Gyantse and Shigatse, experience a completely clear climate, having moisture free air. As a result of this, the absence of dirt or moisture produces an unhindered flow of sunshine into Tibet, containing excessive sunburns. 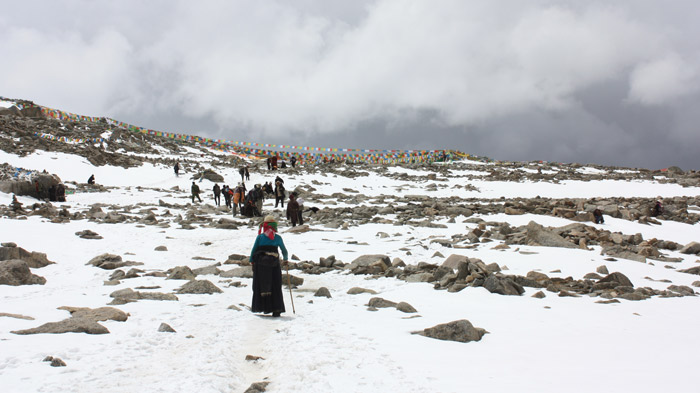 Also as majority of the region of Tibet is covered with snow, UV radiation increases manifolds. Ultraviolet radiation also depends on the reflecting and refractory ability of the materials on the surface. Therefore snow being an excellent agent of reflection and refraction, it increases the UV radiation. Thus this is another factor for increased sunburns in the regions of Tibet. Biologically people with less melanin content, gets affected more by sunburns. It is observed that people in Tibet, in majority, contain less melanin content and hence is affected by sunburns. Sunburns are not incurable or permanent. If proper measures are taken at the right time, your original skin colour can be obtained back.

Some Misconceptions about Sunburns

• There is a myth that exposure to sunrays feeds your bones with excessive vitamin-D and makes your body healthy. This is the most debated topic about sunburns. It is mainly because majority of doctors refused to admit and accept this myth. They have clearly pointed out the fact that depending on this myth, many people get sunbath and as a result expose their skins to the harmful radiations of UV. However many skin specialists have suggested that the soft beams of the sun in the early morning indeed supplies the bone with excess vitamin-D, however that too in a very meager quantity. But the nutrients come from our diet only. Skin specialists have completely disagreed to the practice of sunbathing under direct sunlight for hours after hours.

• Sunscreen companies claim that they can completely protect the skin from UV radiations and hence prevent tanning and sunburns. However this is a myth. Sunscreens do provide a shield but they are not completely capable of protecting the skin from sunburns. It is therefore not advisable to sun bath for hours just with the hope that sunscreen will protect your body from the damage.

• Sunscreens are not always 100% safe to use. Many wrong sunscreens can increase the damage done to skin manifolds.

• There is a myth that the diet has nothing to do with how the body reacts to the sun. However the reaction of the body indeed depends on the diet you have had prior to your sunbathing. It has been researched that the multiplicity of the consumption of processed foods and vegetable oils containing omega-6 are responsible for increased skin cancer.

• Many myths regarding Sun as god make people believe that sun can never do harm to anyone. As a result many local inhabitants, having less education does not even try to protect their bodies from the sun. These myths are causing some major problems in the regions of slightly backward status.

What do local Tibetans do to prevent Sunburns?

Adjustment is very important for combating with any type of regional drawback. In places of excessive cold, just as we see the animals adjust by growing excessive furs, similarly human beings also adapt to that particular conditions. It is their inbuilt mechanism that helps them to combat with the excessive cold. However that does not mean they remain completely unaffected by the cold. They too get affected, however much lesser than a foreigner to that particular place. Similarly in Tibet also, the local Tibetans get less affected by the sunburns. Born and brought up in the place which experiences extreme UV radiation, they have some inbuilt mechanism of skin that makes it less sensitive to such high radiation. 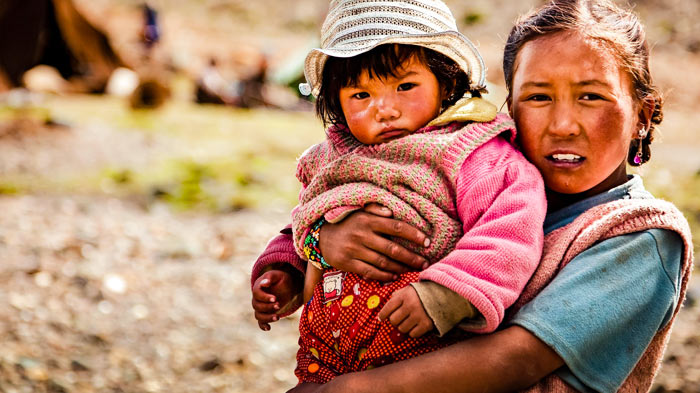 The local Tibetans get less affected by the sunburns.

However, the tourists will witness that local Tibetans too suffer from sunburns. To prevent the sunburn from causing excessive problems the local Tibetans have brought about certain preventive measures in their dressings and diet. The diet of the local Tibetans contains very less omega-6 fat that increases the body’s reaction to the sun. Moreover it is observed that they always remain dressed in long dresses with full sleeves and full length. Usually these dresses are made of light materials. They wear their cold clothes inside and outside this asymmetrical gown type material. These materials with full sleeves and light material absorbs very less sun radiation. The full sleeves and length also protects the arms from the exposure to the sun.

It observed that the Tibetans usually avoid dark colours, especially black. This is because dark colours absorb more sunlight and UV radiation. When they move out of their homes to work under direct sunlight, they use big straw hats or umbrellas for most of the time. They also use cowboy hats for the majority of time. Other than these, the girls sometimes use umbrellas and masks. They also use some herbal creams made by them to combat the side effects of sunburns, but majority of them combat sunburns with their specialized clothing. As for the privileged sections, they use various products and also clothe accordingly to combat sunburns.

How to Avoid Sunburns For the First Timers in Tibet

For foreigners, sunburns in Tibet can pose to be a major problem. However the major threat of sunburn can be avoided if proper measures can be taken. If you follow the following tips, you can avoid the major problem of sunburns. These tips are -

• Always use goggles while trekking and sunglasses while traveling in Tibet. The sunburn can affect your eyes also.

• You should apply the sunscreen more specifically to your nose and cheeks. Note down the hour it works. Apply it frequently after certain interval of time. Reapplying of sunscreen should be done during trekking to Mount Everest Base Camp or other such high altitude ranges.

• Use lip balms having SPF because lips are more sensitive than skin.

• You can carry fresh aloe-Vera gel and apply it at night at the sun burnt areas to protect from permanent damage.

• There are certain antibiotics like Tetracyclinc that increases the effect of sunburn. So in Tibet, it is better not to use drugs randomly.