How to Prevent Lhasa Altitude Sickness for the Newly-Arrived Tourists

Altitude sickness is one of the illnesses that are unique to highland travel. While it can occur at elevations as low as 1,500 meters, it is more likely to affect travelers to higher altitudes above 2,900 meters. In most cases of altitude sickness, the symptoms abate once the body has had chance to acclimatize to the increase in altitude.

Due to the thinner atmosphere of the Tibetan plateau, some of the milder symptoms of altitude sickness are normal for most travelers whilst acclimatizing and can be easily relieved with a couple of days spent in Lhasa for acclimatization. However, there are certain things that need to be taken into consideration when acclimatizing to prevent the symptoms from getting worse or reduce the risk of getting altitude sickness in the first place.

Lhasa, the Tibetan regional capital has an altitude of around 3,656 meters, which is way above the lowest altitude for altitude sickness to have an effect. Newly-arrived tourists to Lhasa often find themselves suffering from some of the milder symptoms of altitude sickness, such as headaches, nausea, etc. This is common for those traveling to high elevations such as this when an intermediate acclimatization has not been done.

However, some people find it harder to acclimatize to the greatly increased altitude and suffer more from the symptoms of altitude sickness. The body adjusts to the higher altitude and decreased oxygen content in the air by producing more red blood cells, to carry the much-needed oxygen to the organs. As everyone is different, the rate at which the body makes new red blood cells differs, and some people can take a lot longer to acclimatize than others, with a small percentage unable to properly acclimatize at all.

Before Your Arrival in Lhasa

For those that are intending to head to the plateau for their vacation, it is important to make sure that you are fit enough and are physically prepared for the strenuous activity at higher altitudes. What many people consider to be a normal walking pace at sea level, is a strenuous activity when done at high altitudes, where more energy is used up in otherwise normal activities.

Before taking the trip, you should be considering your physical fitness, and continuing a regular exercise routine to prepare yourself fully for the journey to the plateau. Running, jogging, cycling, and swimming are excellent pursuits that can aid in your physical fitness to ensure that you are well maintained for the exertions you will face at the increased altitudes of Tibet.

It is important to ensure that you rest well once you arrive in Lhasa, whether by flight or by train. The journey to Lhasa from China and Nepal is a tiring one, and can leave the body drained, especially if you made the trip to Lhasa quickly after arriving in China or Nepal from a long-haul flight. Jet-lag can last for several days after landing and can increase the risk of altitude sickness once you are in Lhasa if you have not properly rested after the long flight. 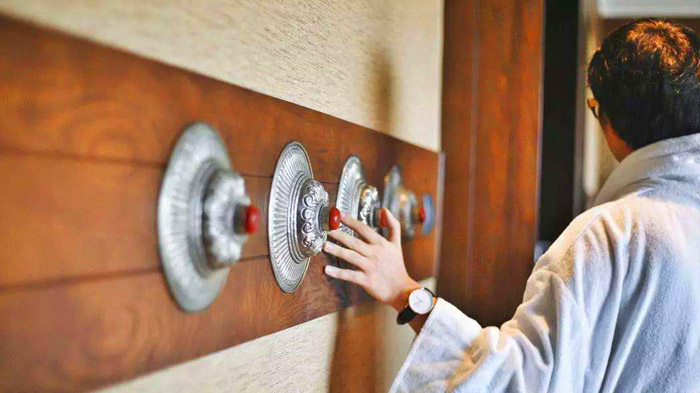 Having a good rest in hotel upon your arrival

Directly after arriving and transferring to your hotel, get some well-earned rest and sleep, ensuring you remain hydrated while you are resting. One of the main causes of altitude sickness in newly-arrived travelers is the excitement of being in a new place and wanting to explore straight away, without getting the proper rest after traveling.

As mentioned previously, walking at a high altitude is more demanding than walking at the same pace at sea level. The body is struggling to provide oxygen to the organs, despite producing more red blood cells, and strenuous exercise can be debilitating in certain cases. Walking at a slightly slower pace than normal, what you would call a gentle stroll at sea level, can help to prevent over-exertion and reduce the risk of altitude sickness.

Running, climbing, and extreme physical exertion should be avoided for the first few days, and indeed for the entire trip for some. Since Tibet is a much more laid-back culture than most rushing western cultures, it is fine to take it easy and relax more, taking your time to walk around places, and resting often when faced with long climbs such as the one to the Potala Palace.

Despite it being cold on the Tibetan plateau, the climate can still cause severe dehydration, which is one of the main causes of the symptoms of altitude sickness. It is important to remain properly hydrated at all times and drinking plenty of water throughout the day can help to keep yourself hydrated. You can also use electrolyte solutions to help balance the electrolyte levels of the body and prevent dehydration and altitude sickness by keeping the blood thinner while still producing more red blood cells. Drinking an increased amount of water for several weeks before you travel to get the body used to higher water intake levels at the higher altitudes can help as well. 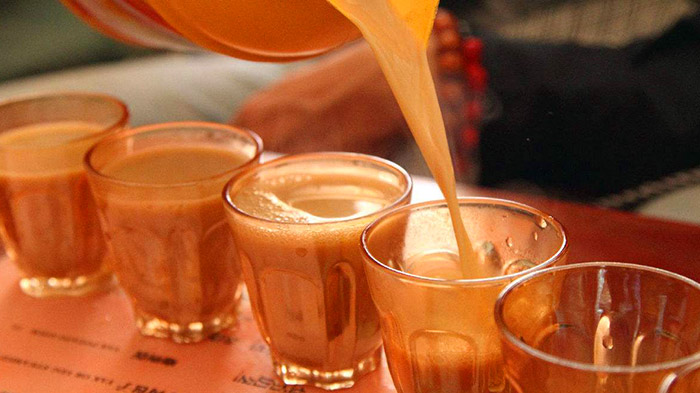 Tea is a natural aid to helping to reduce the symptoms of altitude sickness, and the Tibetans have lots of places where you can get the famous Sweet Tea and butter Tea. Tea contains natural antioxidants that not only flush the toxins from your system but also aid the body in acclimatizing to the increase in altitude. Proper eating habits should also be adhered to, by consuming plenty of vegetables and high-protein, slow-release energy foods. Dark, leafy greens, beets, lentils, raisins, black beans, red meat, and liver can all help increase the much-needed iron content into your diet. Stay away from iron supplements, as they are often too concentrated to be useful at high altitudes. - Check Sweet Tea Houses in Lhasa City

Take Proper Medication with the Help of Local Doctor or Pharmacist

There are certain medications that can help with the symptoms of altitude sickness, the most predominant being paracetamol or ibuprofen to tackle the headaches. Do remember to consult the doctor or pharmacist if plan to purchase medicine for relieving altitude sickness.

Altitude sickness can feel very much like a hangover, without having enjoyed the drinking session beforehand, and some mild painkillers can help ease the headaches. However, take care in how often you take them, as they may mask some of the other symptoms if taken to frequently, which could lead to more severe symptoms than expected. 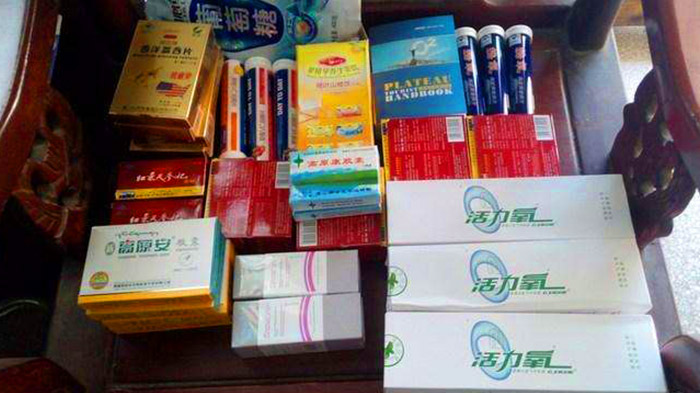 Taking some medicines for altitude sickness

Diamox, one of the drugs that is often recommended for people traveling at high altitudes, is supposed to greatly reduce the risk of getting any symptoms if taken before traveling to Lhasa and treat the symptoms after they occur. Before taking such drugs, which can have a detrimental affect on many people, you should consult your doctor before leaving for Tibet. There is no wonder drug that can stop you from getting altitude sickness, and such serious medications should be avoided to allow the body to acclimatize naturally. - Know more Advice on Tibet Altitude Sickness from Doctors

If you are feeling the symptoms of altitude sickness while you are traveling Tibet, you should notify your guide, who is fully trained in recognizing the symptoms and can help with some treatments or can recommend that you move to a lower altitude and even take you to a hospital if that is necessary.

Have a Correct Mentality towards the Symptom of Lhasa Altitude Sickness

As with almost everything in life, the right attitude can work wonders in helping to get over any of the symptoms of altitude sickness. Knowledge is the greatest weapon we have, and knowing what altitude sickness is, how it will affect you, how long it can last, and what you can do about it is much more important than taking some drug that someone on the internet said would work.

The symptoms of altitude sickness can leave you feeling uncomfortable and stressed. Knowing that it will pass, and not panicking about feeling ill should help with the mental attitude that you need to get over this mild illness. The use of oxygen is often preferable to having the symptoms and can help relieve them in the short term. However, while you are using oxygen, your body is no longer acclimatizing, and the repeated use of oxygen at high altitudes can make the symptoms worse when you stop using it.

Ask any mountaineer and they will tell you to ascend gradually and sleep lower than you ascend. This is the general rule on traveling at high altitudes, and ascending gradually, in smaller increments, can help to reduce the risk of altitude sickness by allowing the body to acclimatize a little at a time. This stages acclimatization is important and climbing or ascending too high can leave you open to more severe symptoms. Ascending too high to quickly can cause the more severe types of altitude sickness to occur, such as High Altitude Pulmonary Edema (HAPE) and High Altitude Cerebral Edema (HACE), which are both potentially fatal. 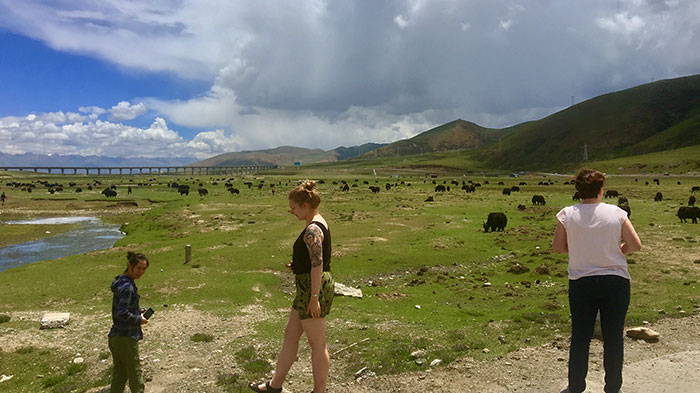 Do Avoid Your Previous Unhealthy Lifestyle in Lhasa and beyond

We all have our little bad habits. Some people smoke, some drink, some like to stay up late. Whatever the bad habit, in Tibet this can lead to you having a massively increased risk of high altitude sickness. Smoking and drinking alcohol and strong coffee can leave you with high blood pressure. In Tibet, the body acclimatizes by adjusting to increase the oxygen content. One of the ways that it does this is by increasing your blood pressure. Too much of an increase, such as that caused by alcohol, coffee, and tobacco, can have a detrimental effect, and can, in extreme cases, cause strokes and worse.

Similarly, those who like to stay up late at night are not getting a good night’s rest. Unlike at lower altitudes, on the Tibetan plateau, sleeping can be a lot harder, and not resting properly at night can result in fatigue, muscle pain, and general aches and headaches, which can all lead to an increased risk of altitude sickness.

Never Catch a Cold in Lhasa Shortly after Your Arrival

Catching a cold at high altitudes is nothing like catching a cold at sea level. A cold leaves your body’s immune system overworked and leaves you tired and fatigued. The headaches, runny nose, and coughing can all be detrimental to proper acclimatization, and can leave you open to more serious symptoms of altitude sickness.

When traveling Tibet, it is important to stay warm, as the body also needs to adjust to the different climate. Plenty of warm layers are better than one thick jacket, as you can remove some if it does get too hot and put on more when it gets colder to stave off the chills that can cause a cold. You should also avoid long, cold showers for the first few days, and avoid getting your hair wet and then going outside, as both of these can increase the risk of getting a cold. In remote areas, where there is often only very cold water, taking a shower is impossible, and some places do not have showers at all. Take some wet wipes for hygiene purposes and to stay clean, as even being a little dirty can sometimes cause illnesses that increase your risk of altitude sickness on the plateau.