Harvest Time of Tibet: basic facts on the harvest season in Tibet

A high-altitude plateau, Tibet is one of the harshest environments on the planet, and not an ideal place for farming. However, while this environment is hard to cultivate, the Tibetans have employed farming methods that have lasted for thousands of years, and produce a number of crops, including the hardy highland barley. Harvest on the plateau generally runs through August and September, after a planting season that begins in March or April.

What to Grow on Tibetan Plateau?

Plateau life in Tibet was traditionally based on an animal husbandry system, with nomads herding their yaks and sheep across the plateau. Eventually, Tibet began a form of subsistence agriculture on the plateau, with a very limited number of crops that can be grown in this harsh environment. Farming of this kind came to the plateau more than 3,600 years ago, pushing into the areas of the Tibetan nomads from the lower regions of the plateau.

High-tolerance crops, such as highland barley, rapeseed, and buckwheat were the original crops of the plateau, with barley being the primary arable crop on the higher reaches of the plateau, where few things can survive. Later, other crops began to be grown on the lower areas below 4,000 meters, such as potatoes, wheat, and oats, with millet being grown in the eastern areas of the plateau.

Fruit trees grow in some of the lower regions of the plateau, such as Nyingchi and Shannan, and in the south of Tibet, the farms are rich in red peppers, corn, dry-land rice, pumpkins, turnips, mustard, radishes, and cabbages. In some of the warmest areas of the plateau, in the deep river valleys in the south of Tibet, rice and cotton can also be grown, where the weather is warm enough.

The hardy qingke barley, also known as highland barley, has long been the main crop on the plateau, and has become a staple of the Tibetan diet, used in almost every meal as tsampa, and even used to make barley wine and a number of other dishes. A unique, drought-resistant crop, barley is grown in many places across the plateau, and is the only grain crop that can grow comfortably in the higher reaches of the plateau, including the extreme north. 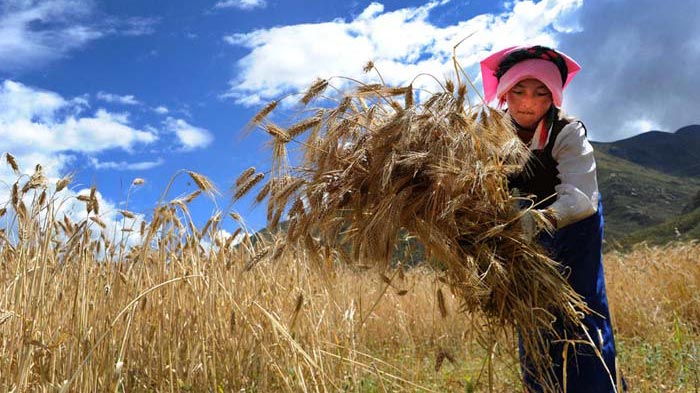 It's a good harvest for highland barley.

Similar to wheat in appearance, the qingke barley is rich in soluble fibers and is useful for slowing down digestion and reducing cholesterol, essential for surviving life on the harshest plateau environment on the planet. However, as it is low in gluten, it is not suitable for bread, and most Tibetan barley bread is flat and black, often a side dish for Tibetan meals. It is, however, very good for thickening soups and stocks, and can be added to the yaks milk for healthier babies and children.

When is the Harvest Time of Tibet?

Harvest time in Tibet varies from region to region, and can depend on a number of factors, including the climate, the amount of rain, how much sunshine there has been, the time of planting, etc. Generally, it occurs anytime from May to August, depending on the region and when the crops will ripen. With such varied climate and weather patterns, there are no two regions that harvest their crops at the same time, making the entire summer season the general harvest season in Tibet.

The Weather and Climate in Tibet

Tibet weather varies a lot, depending on where in the region you are, though in general it can be divided into two major climate zones. The north of Tibet is a typical high-altitude steppe with a tundra steppe climate that is cold for most of the year, and with frozen ground almost all year round. Most of the north of Tibet is made up of the vast Changtang Prairie, where the altitude reaches well over 5,000 meters and the winter temperatures can drop to as low as -40 degrees in extreme cases.

In the central areas of Tibet, around Lhasa and Shigatse, and much of the rest of the region, the climate is less harsh, and more agreeable for growing crops. While still averaging over 3,500 meters above sea level, the areas have a variety of temperature ranges, with the central area of Lhasa being warmer, while the western areas of Shigatse and Ngari can be cold to freezing. The south of the region is an average temperate climate, with good lands for growing crops and milder temperatures.

Climate has a huge effect on the ability to grow good crops, and while there may be few crops grown in the north, the central, western, and southern regions have a more amicable farming climate. Extreme cold can restrict the growth of many crops, even the hardy highland barley, but in the milder areas, wheat, millet, corn, and a great many other crops can survive, and even thrive.

August and September are the main harvest time of Tibet

The time for harvest is usually in August and September. The harvest time is different from place to place and is determined by the weather conditions. In the area around Lhasa, most of the farmers harvest in August, while in Shigatse areas they do it in September. When you come to Tibet in August and September, you can see farmers busy with harvesting in their farmland. The best quality and highest amount of barley you can find in Tibet is in the Gyantse area, where the crop thrives in the milder climate. 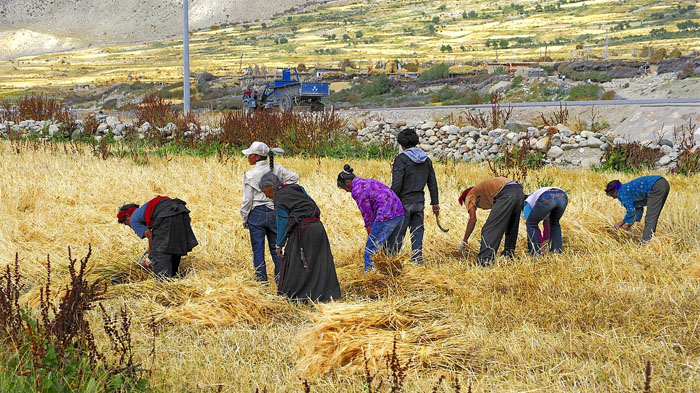 Farmers will become busy reaping during the time from August to September.

Most farmers do have their own fields, but in Tibet, they will usually help other farmers from their local communities to finish the harvesting, to get it all in before the season ends and the weather becomes too cold. Harvests are done manually, using sickles and scythes, and the farmers go from field to field cutting the crops while the women gather them into bundles for storage or threshing.

There are two major agricultural-based festivals in Tibet, one at the beginning of the year when the crops are planted, and another at the middle of the year just before the harvest begins. Festivals are an important part of the Tibetan way of life, and are held with reverence in these farming communities, as the people believe that the gods can make or break their crops and harvest if they are not devout enough.

Before the farmer starts the planting season in March and April, there is one small one-day festival that is held all over the farming communities. Known as Nyatro Day, the festival is all about being prepared to till the soil ready for planting. The farmers dress up in their finery, and dress their working cattle too, and take a picnic on the land they are going to dig over for planting. The following day, they start to cultivate the soil, the cattle pulling the ancient design of manual plows that turn the soil into furrows ready for the crops of wheat and barley to be seeded into the ground.

Once the plowing and planting are down, the seed furrows are covered over, and the farmers wait for the rain that will bring on the crops. A few of the farms now have irrigation systems in the more densely populated farming areas close to the larger cities, though most just rely on the plateau monsoon to feed the crops ready for harvest.

From around the middle of June the plateau experiences the monsoon rains, which are the main water source of most of the arable crops in Tibet. Once the rains come, the crops start to grow very fast, and around 6-8 weeks after, the heads of wheat and barley will begin to ripen, as the rainy season comes towards its end. This is the time that the farmers will have their own festival to pray for a big harvest. 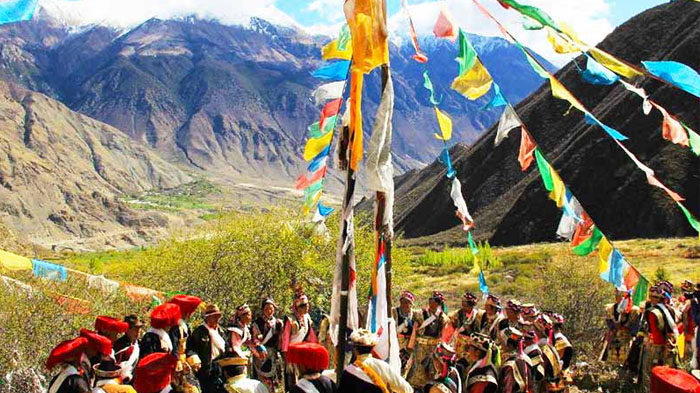 Tibetan farmers are celebrating Ongkor Festival to pray for a big harvest.

Known across Tibet as the Ongkor Festival, and sometimes Choekhor, the festival consists of a ritual kora around the farmlands, performed by 100 women from the local farms, with prayers and carrying Buddhist scripture books on their backs. Led by monks and lamas, the women parade around the fields that will be harvested, chanting sutras from the Buddhist texts, while the onlookers shout "Come back, the soul of the earth!" in Tibetan.

Ongkor literally means, “surrounding the farmland”, and the festivals are celebrated at different times in different areas of Tibet, depending on when the harvest time in that region begins. The time of Ongkor is also the last chance for the farmers to rest before the hard work of bringing in the crops, and is a good time for eating, drinking, singing, and merriment.

Farming in Tibet has been a major source of food crops for more than 3,000 years, since the first arable farming came to the plateau regions that were traditionally used by nomadic herders. Since then, farming, mainly subsistence farming, has been one of the mainstays of the Tibetan diet and way of life, and even has its own religious festivals that are only held in these unique farming communities.

0 Comment ON "Harvest Time of Tibet: basic facts on the harvest season in Tibet"