Tibet is a major stopping off point for migratory birds, in both winter and summer. While some species stop there for the summer season, moving back from warmer winter-feeding grounds to summer on the high plateau environment, other species inhabit the plateau during the winter, where it is warmer than their normal habitats in northern Asia and Europe. Tibet has an ideal habitat for migratory birds all year round, with the different environments providing nesting and feeding grounds for the hugely varied species of birds that visit. Lying on the main migration route for birds, over 530 species have been sighted in Tibet, although only 30 or so actually reside there permanently. 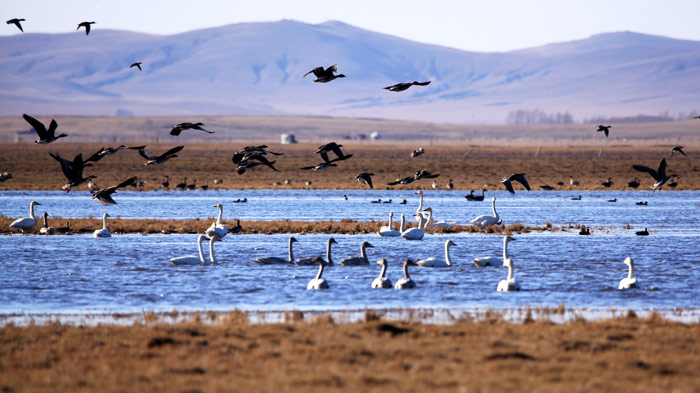 Tibet has an ideal habitat for migratory birds all year round.

Bar-headed geese spend the summer on the plateau, and migrate over the high Himalayas to winter in the lower, warmer climate of India. You can also find the black-headed gull in Tibet during the summer months, before it migrates further south for the winter. Although called a gull, it is definitely not a “seagull”, and is mostly found inland, around lakes and reservoirs. Other birds regularly found in the region are; Blyth's kingfisher, redstarts, finches, grey-sided thrushes, Przewalski's parrotbills, large-billed bush warblers, bearded vultures, wagtails, chickadees, wild swans, and nuthatches.

Conversely, species like the Ruddy Shelduck and black-necked cranes spend all year on the plateau, and are both revered by the Tibetan Buddhists. Although the Ruddy Shelduck is primarily a migratory bird, and many of the species migrate from the summer grounds in northern Europe to India for the winter. In Tibet, the species can be found all year round, and the migration is down to the lower altitude areas of the region, where the winter is mild and warmer than in the high altitude regions.

The black-necked crane, though, is a constant resident of the Tibetan Plateau, and can be found in most of its natural feeding grounds all year round. It is a bird that is held in high esteem in Tibetan Buddhism, as a symbol of peace and a harbinger of good fortune. In the Tawang District of Arunachal Pradesh, they are revered as the embodiment of the sixth Dalai Lama, Gyalwa Tsangyang Gyatso, who was a Monpa from Tawang. They are a protected species in Tibet and China and in most other places.

Every year thousands upon thousands of black-necked cranes head towards Linzhou County in Lhasa for their winter-feeding grounds. Only a short, 65km ride to the northwest of metropolitan Lhasa, it is a great place to study and photograph the black-necked cranes in their natural habitat. From December through to spring, the cranes spend their winter in the area of Linzhou County, with huge flocks nesting around the Hutoushan Reservoir. 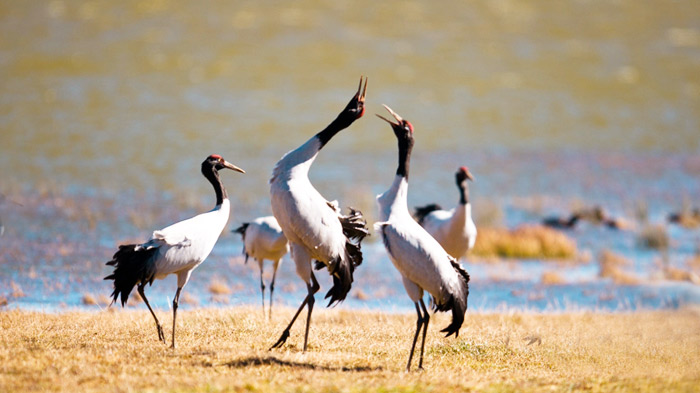 The Hutoushan Reservoir is a major winter-feeding ground for rare birds.

The Hutoushan Reservoir is a major winter-feeding ground for these rare, revered birds. This endangered species migrate south from the Changtang Grasslands every year, heading back north in late March. They are the only species of crane that lives all year in these high altitudes, and in Linzhou, local volunteers patrol the 96 square kilometers of the Linzhou Black-necked Crane Preservation Zone. Cranes migrating to this area feed on the remnants of the harvested crops, and a monitoring platform has been built on the reservoir to watch over the health of the flocks. The best time to see them is overnight to dawn, as they fly off to forage for food around daybreak every day.

Karze Township, as well as Codoi Township, are small rural towns with large farming communities. These are great places to see the cranes during the day, as they feed on the remnants of the harvested crops. The cranes “graze” much like cattle, and can cover several kilometers in one day looking for food. While foraging, the birds walk, rather than fly, and search through the old crops in the fields for grains and shoots they can eat.

68 kilometers east of Lhasa lies an area that is well known for its migratory birds. Maizhokunggar County is a rural area of Tibet, where barley is grown all year round. And for migrating birds, that is like having an all-you-can-eat buffet. This rich, arable pasture provides a good habitat for migrating birds, and the winter highland barley, winter wheat, and other crops are a big attraction. 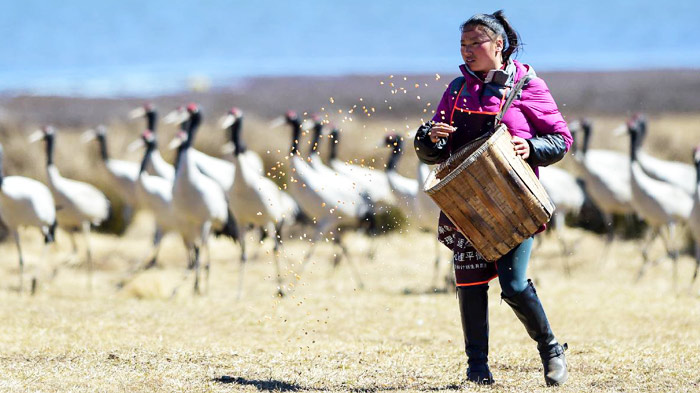 A woman is feeding black-necked cranes.

Black-necked cranes, bar-headed geese, and many other species spend the winter in this area, with its rich abundance of food. Moreover, with it being a relatively flat area, it is easy to get good shots of the birds during feeding, or when they fly off to new pastures.

Surprisingly, one of the best places to see winter birds is in downtown Lhasa. At the foot of the Potala Palace lies the Zongjiao Lukang Park, a small public park in the center of the city, with several small artificial lakes. The park is a favored place for locals to get their morning exercise, running around the park and using the variety of fitness equipment installed there. 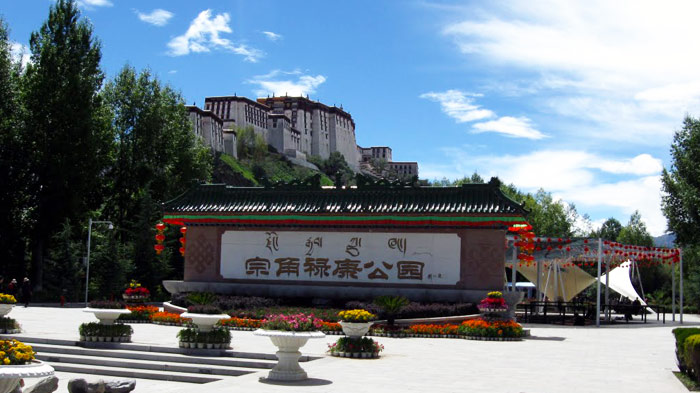 The park becomes home to hundreds of black-headed gulls from November to march, and they can be seen daily, hunting for food or lazing around on the calm waters of the lakes. And with the Potala Palace in the background, it makes an excellent picture opportunity, while you take a morning stroll through the park.

The Lhasa River is one of the most beautiful river habitats in Tibet. Set against the backdrop of stunning mountain scenery, this wide, shallow river is a haven for migrating birds. As the winter approaches the Lhasa River basin starts to get busy, with thousands of migratory birds descending on the area for the winter. As well as black-headed gulls, which prefer the banks of lakes and rivers to the rough coastal shores, wild ducks fly down from their summer breeding grounds in northern Tibet to spend the winter on the calm, clear waters. 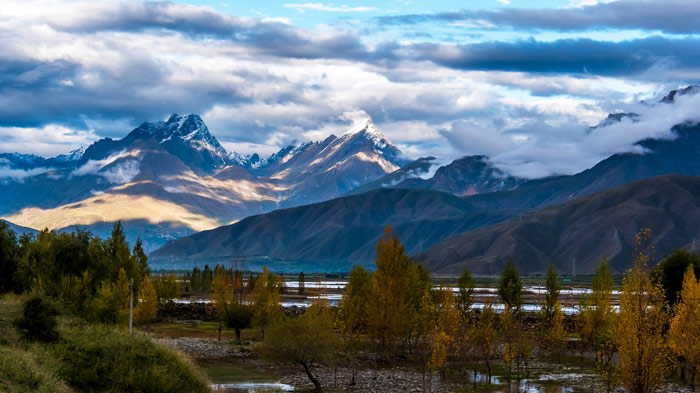 The river banks along parts of the Lhasa River are made up of small, rocky cliffs, which make the perfect habitat for the Ruddy Shelduck (tadorna ferrugineas), which likes to nest in crevices or holes in cliffs. This beautiful, reddish-brown duck is native to Tibet, and is one of the few ducks that forms a lasting pair bond between male and female. If you want to make a day of it, take a picnic and go sit by the river to watch the birds.

Lalu Wetland National Nature Preserve is the largest and highest urban wetland in the world, at around 12.2 square kilometers, with over half of that space inside the city of Lhasa. Known as the “Lung of Lhasa”, it is the only wetland in the world that is inside a city, and is scientifically proven to be a major source of oxygen for the region around Lhasa. The grasses that grow in the wetlands produce more than 53,000 tons of oxygen every year, absorbing over 78 thousand tons of carbon dioxide in the process. 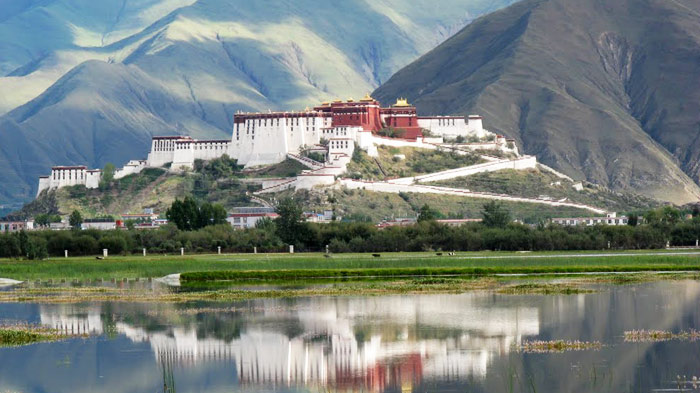 As you drive from Lhasa along the G318 National Highway (now more well known as the Southern Route of the Sichuan-Tibet Highway), you come to Dagzê county, and open area of landscape that is full of farms and arable land for crops. It is here that you can see some of the best sights of thousands of migratory birds foraging for food among the remnants of the summer harvest, and feeding on the winter crops of barley and wheat. 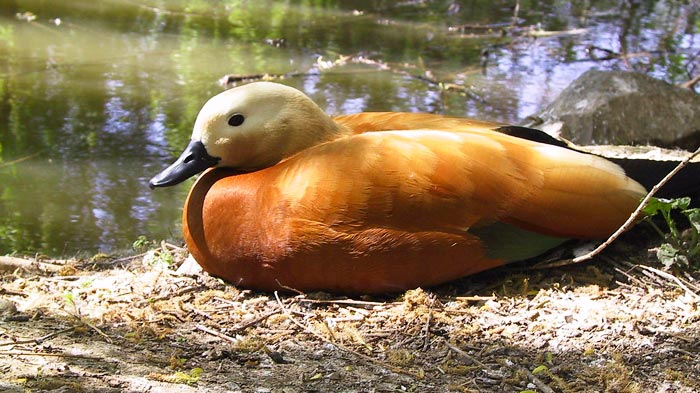 Alongside those farms and fields are vast expanses of wetlands that extend for miles in every direction, and make a perfect habitat for migrating waterfowl such as the Mallard duck, Ruddy Shelduck, and black-necked cranes. With the wetlands so close to farmlands, these cranes get to pick among the crops without flying miles to get back to their winter nesting grounds in the wetlands.

Best Time for Birdwatching in Lhasa

For anyone coming to Tibet to see the huge variety of local and migratory birds, there is something to see all year round. From the spring to fall, the local birds abound, and can be seen everywhere, with the summer migratory birds adding finches, thrushes, redstarts, swallows, nuthatches, and kingfishers to the population. From Late November to late March, you can see the winter migration of waterfowl to the areas in and around Lhasa, with the black-necked cranes being the most popular bird to come and see. 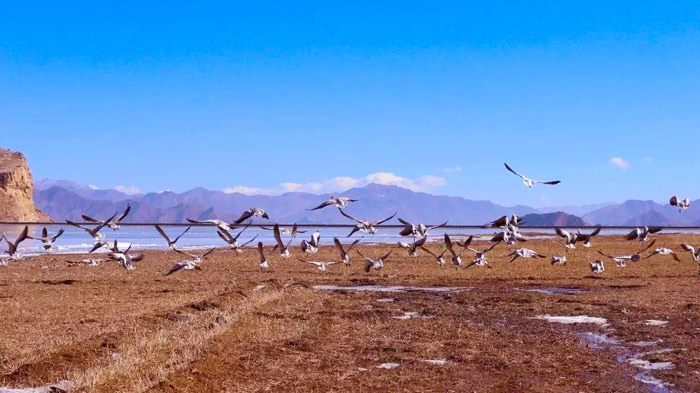 Best Time for Birdwatching in Lhasa

If you want to get out and see the huge variety of avian species in Lhasa, you need to go out in the early morning before dawn, and the late afternoon, as the sun is setting. These are the times when the birds are either getting ready to go out and find food for the day, or gathering in huge flocks before nesting down to sleep at night. For around two hours before sunset, the birds are incredibly active, and flocks can be seen swooping around low in the sky over the wetlands and the river.

1. Do not to use a flash when photographing birds, as it can scare them and spoilt the sight for others. The use of natural light is the best option, and can make for a stunning shot with the right conditions.
2. Wear dull, plain colored clothes, and avoid bright colors and multi-colored clothes, such as red, yellow, pink, orange, etc. Greens and browns are the best colors to wear, as they help you to blend into the background more easily, so you are less likely to startle the birds.
3. Maintain a respectable distance from the birds, and use a long lens for the best shots. Birds can be shy and timid around people, as they are not used to having humans in their natural habitats, especially in the wetlands, lakes, and rivers. However, you may find that some of the local birds in the Zongjiao Lukang Park are more used to humans, and will allow you to get a little closer.
4. Please do not feed the migratory birds with normal grocery foods, as this can make them ill. Migrating birds are not like the ducks and geese that can be found in many parks in the U.S., U.K., and Europe, which happily eat the bread thrown for them. Human food is not good for migrating wild birds.
5. When timing to go out to photograph the birds, it is best to follow their living habits, and try not to disturb or photograph them at night. Birds that are scared or startled when sleeping often do not come back to their nests.