Namtso is known as a heavenly lake in Tibetan language and also the highest salt lake in the world. It is one of the holiest lakes in Tibet. And it is also known as northern holy lake. It is situated on northern part of Tibet which is under administration of Damshung County. It’s on the altitude of 4800 meters above sea level and about five hours from Lhasa. You have to go through two passes before arriving at the lake. On the first pass you can see Nyenchen Thangla Ranges which our people consider as a local god and is faced to Namtso Lake we consider as goddess. That's why it is known as the northern holy lake. Namtso Lake tour will leave you a deep impression.

The water in Namtso Lake mostly arises from rains, melted ice and snow of Mt. Nyenchen Tonglha and the inflow of crooks and streams. Therefore the lake is very clear and limpid. And the lake and the sky seem to be undivided, which will make tourists feel themselves in an amazing fairy world.

Summer and Autumn - the Best Time to Visit Namtso

When it comes to the best season to visit Namtso, it is definitely summer. Namtso Lake temperature is a crucial factor for a tour. Because during that time it is not too cold and also the road is accessible. You can spend a night over there because weather will be so clear and you can get very good views and pictures, especially during sunrise and sunset. In addition, you can see Nyenchen Thanglha Mountain Range very clearly. Namtso Lake will be so clear and it is very beautiful. 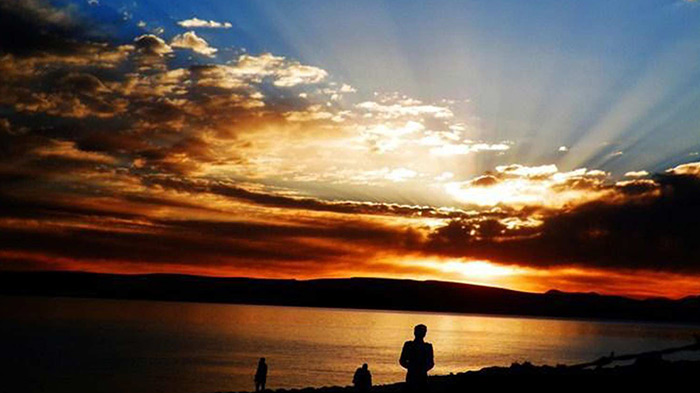 In Tibetan, Namtso means “Heavenly Lake”, and it really is a most beautiful sight to behold. It is honored as a holy lake for both Buddhists and Bonpo, and is the legendary birthplace of the ancient Zhang Zhung kingdom, that rose to power almost 18,000 years ago. In Tibetan Buddhism, Namtso is believed to be the ashram of Cakrasamvara of Tibetan Esoteric Buddhism.

One of the major traditions of Tibetan Buddhists is to walk the holy kora around Namtso lake, which can take as long as 30 days to complete, and which passes all four of the monasteries that lie on its shore, at the four corners of the compass. Pilgrims often come to the lake for the kora, many prostrating themselves in prayer to the lake, at various points around its circumference. It is believed that the kora is best done in the year of the Goat, as this will give more merits to anyone who finishes the circumambulation.

In summer, you can see more. Namtso has a broad expanse of water, that stretches as far as the eye can see, and the pure waters ripple slightly under the azure blue sky, reflecting the wisping clouds that rush past, on wings of high plateau winds. huge mani stones are set along the shoreline, and colorful prayer flags adorn the hillsides and monasteries, making the lake more mysterious and beautiful. Many of the huge stones that sit around the edge of the lake have existed there for millennia, and are told of in the beautiful Tibetan myths and legends. 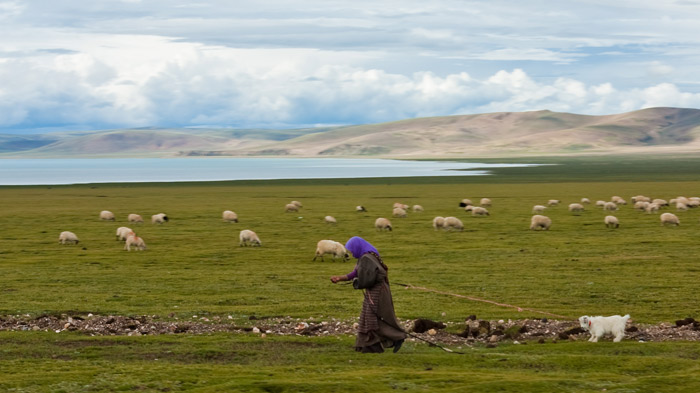 In summer, you may see the herds of yak and sheep beside Lake Namtso

In the summer, the nomads usually move across the grasslands with their herds in order to find the best grass and water for their animals. If you travel to northern Tibet in summer, you might have chance to see the herds of yak and sheep that graze on this excellent pasture land, and visit the nomads or ride their horses. The lake area is also a haven for wild animals, such as wild yaks and donkeys that roam the vast, expansive grasslands in northern Tibet.

However, in summer we have a short rainy season, which is from June to August. During that time if it is raining you will not be able to overcome the second pass on the route to Namtso, or you might have to wait for good weather because of its high altitude which is about 5,100 meters above sea level.

In addition, in autumn it is a bit colder than summer but there is no rainfall during that time and you will be able to pass through those passes very easily. You will also get a very good view of those mountain ranges and the lake.

With autumn being one of the best times to visit Namtso, there are plenty of things to do and see there, which will be sure to take your breath away. With the clouds gone from summer, and clear skies taking their place, it is a great time for stargazing. So far north on the plateau, there is absolutely no light pollution from cities and settlements, which means that the complete darkness of the land makes for the best viewing of the heavens above. 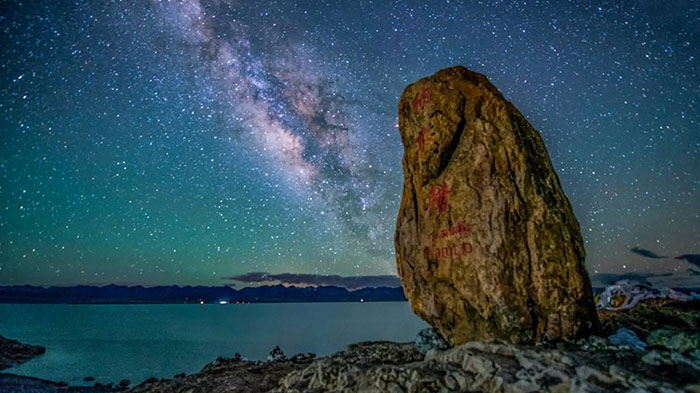 With the clouds gone from summer, winter is a great season for stargazing

The night sky over the lake and grasslands is filled with more stars than you have ever seen before, and for stargazers, it is truly a heaven on earth. So dense and clear are the stars that even with the naked eye, one can see the nebulas and gas clouds that are invisible at lower altitudes, and the stars cover the sky in a winkling blanket of lights.

Never Miss the Stroll Along the Tashi Dor Island Beside Namtso

Namtso is a lake that has five small islands in the midst of it that were once used for spiritual retreats for monks. They would head over to the islands at the end of spring, before the ice melts, and stay there until the ice reforms again, meditating and attempting to reach enlightenment.

Nowadays, these islands are sanctuaries for birds rather than monks, and several rare species can be seen there in the summer and autumn. The lake also has five peninsulas, to match the five islands, and the largest is the Tashi Dor Peninsula. Ten square kilometers of land jutting out into the lake, the peninsula is the home of the Tashi Dor Monastery, which has several ancient hermitage caves underground, one of which is believed to be the cave of the Indian Buddhist master, Padmasambhava and his consort Yeshe Tsogyal. The caves still host meditators at certain times of the year, and the entrance to the caves is marked by two huge standing stones.

As well as the monastery, the peninsula is host to several karst formations, a stone forest, and naturally formed bridges and ladders. The stone forest is an amazing feature of nature, comprising of dozens of natural stone peaks that resemble tree trunks, and some that even look a little human in shape. These stunning shapes can really spark the imagination, and the mind can see all kinds of shapes in the rock. 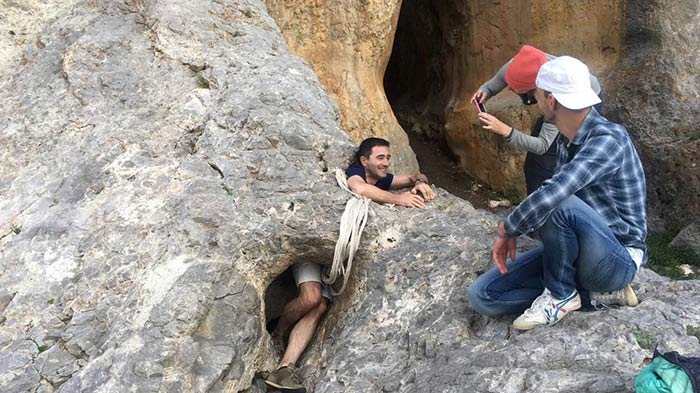 The karst caves are natural masterpieces

The karst caves are quiet grottos that are natural masterpieces. Some are long and narrow, much akin to the subways of New York, while others are vast and domed, and filled with stalactites and stalagmites. With the caves, the stone forest, and the natural stone bridges and ladders, Tashi Dor Peninsula is filled with mystery and enchantment.

For many pilgrims to Namtso, walking the kora around the lake is part of the journey, but for tourists, who may not have a whole month to walk, there are some fine walks in the area that can be done in a few hours. The “short kora” route is one, covering around four kilometers, and takes around an hour to complete. From the accommodation area of Tashi Dor monastery, the trail leads off to the west, to a hermit cave that is hidden behind a large column of stone. From there, the trail continues around the rocky promontory covered with prayer flags and cairns, to the place at the end where pilgrims often undertake a ritual washing in the waters of the lake.

Then it follows the path past several caves and a prostration point, where twin rocks stand up from the earth, like two hands in the Namaste greeting. Nearby, the cliffs are covered with cracks where pilgrims will squeeze inside as a way to detect their sins, drinking the water dripping from the roof of the cracks. As the path continues its curve around the shoreline, it passes a group of ancient rock paintings.

In the northeast corner of the peninsula is a hill, and at the top is the Mani Ringmo, the large mani wall which has the chorten at the end of it. The chorten carries the handprint of the third Karmapa, the ancient head of the Karma Kagyu sub-school of Tibetan Buddhism, and the oldest reincarnation lineage in Tibetan Buddhism.

Visiting Namtso in Winter or Spring

In winter and spring, it is not a good time to go to Namtso because of the bad weather and climate condition. As Namtso is situated in the northern part of Tibet, it snows every winter and the road is not so safe in the winter. It is also very cold over there and the lake will be frozen in winter and spring. Therefore, if you are visiting Namtso you have to come here in summer and autumn when it is the best time to visit that holy lake Namtso.

The tour route from Lhasa to Namtso is around 250 kilometers driving northwards towards the Changtang Grasslands, on the Qinghai-Tibet Highway, one of the major road routes from mainland China into Tibet. The drive is normally 5-7 hours, depending on the road and weather conditions, and should be done starting early in the day.

There are also some great places to see along the way, such as the Tsurphu Monastery, the traditional seat of the Karma Kagyu sect of Tibetan Buddhism, and the spectacular Yangpachen Hot Springs, one of the most famous natural hot springs in the world, and the site of the recently built thermo-electric power plant that sits on the edge of the springs, and is the first geothermal power plant in China.

The last spectacular sight, before coming into view of the holy Lake Namtso, is the highest mountain close to Lhasa, Mt. Nyenchen Thanglha. As the highest peak of the Nyenchen Thanglha Mountain Range, at 7,162 meters, it stands tall above the area, and can be seen from the shores of the lake in the near distance.

Lhasa to EBC and Namtso

Touring from Lhasa to Everest Base Camp, and then on to Lake Namtso is an adventure like no other. Beginning in Lhasa, you will get to see all the great sights of this beautiful capital city, such as the Jokhang Temple, Potala Palace, and the Drepung and Sera monasteries. Then it is out on the road to the west of the region.

After spending time in EBC, you will then travel through Sakya, visiting the monastery, before finally heading back east to stop at the amazing Lake Namtso, one of the three Holy Lakes of Tibet, and one of the most beautiful lakes in the world.

1.For foreign tourists, they must apply for Tibet Travel Permit before travelling to Tibet
2.It is also necessary to bring some clothing and snacks in your trip to Tibet.