Where is Nagchu Railway Station?

Nagchu Railway Station is an important Tibet train station for transferring and replenishment along Qinghai-Tibet Railway, the world’s highest railway. All trains to Tibet make a stop at this train station. It is the first major station you meet when the train enters Tibet.

Tibet Train in and out of Nagchu Railway Station

All trains to Tibet from mainland China take a stop at Nagchu Railway Station. You can take any Tibet train to Nagchu from most cities of mainland China. The shortest train journey to Nagchu is from Xining, which only takes around 17 hours, while the longest train journey to Nagchu is from Guangzhou, which takes nearly 49 hours. The train ticket price is based on the length of the journey. You can see the exact train ticket price from the schedule below.

Tibet Train to Nagchu from Lhasa

After leaving Golmud in the Qaidam Basin, the Tibet train will cross the Kunlun Mountains and the Tanggula Mountains. The elevation gradually rises from 2,780 meters in Golmud to the highest point, the Tanggula Mountain Pass, at 5,231 meters above the sea level, then slowly descends to 4,500 meters when arrives at Nagchu Railway Station, and finally reaches to 3,650 meters in Lhasa. 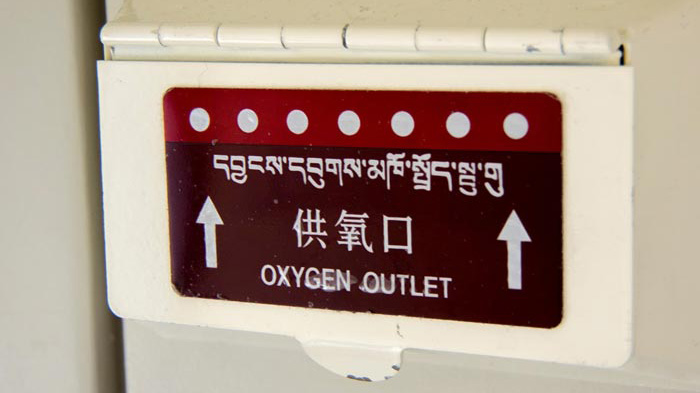 The corridor along the Qinghai-Tibet train is equipped with oxygen supply outlet.

However, you don’t need to worry about the high altitude sickness on board. On each train to Tibet, there is an oxygen supply system and oxygen supply outlets, which will start to work after passing through Golmud.

Shortly after leaving Golmud, for about 1 hour by train, the scenery on both sides of the railway gradually changed from plain meadow to rolling mountains, the terrain became steeper and steeper, and the snowy peaks in the distance gradually appeared.

The Hoh Xil Nature Reserve is located in the western part of Yushu Tibetan Autonomous Prefecture in Qinghai Province. It’s mainly used to protect Tibetan antelopes, Tibetan wild donkeys, wild yak and other rare wild animals in Tibet Plateau. The average altitude of Hoh Xil is about 4,500 meters. The Qinghai-Tibet Railway passes through the east side of the reserve. If you take the Train Z264 (Guangzhou - Lhasa) or the Train Z164 (Shanghai - Lhasa) to Nagchu, you can have much more time to witness the wild animals in the no-man area in the daytime.

Belonging to the Hoh Xil Nature Reserve, the Tuotuo River is the source of the Yangtze River and is about 4,500 meters above sea level. It takes about 5 hours from Golmud to the Tuotuo River Bridge by train. When you take the Z264 train from Guangzhou and the Z164 train from Shanghai to Lhasa, which arrive at the Tuotuo River area about 6 or 7 in the morning, you can see the river clearly on the train, even the amazing sunrise from the river. 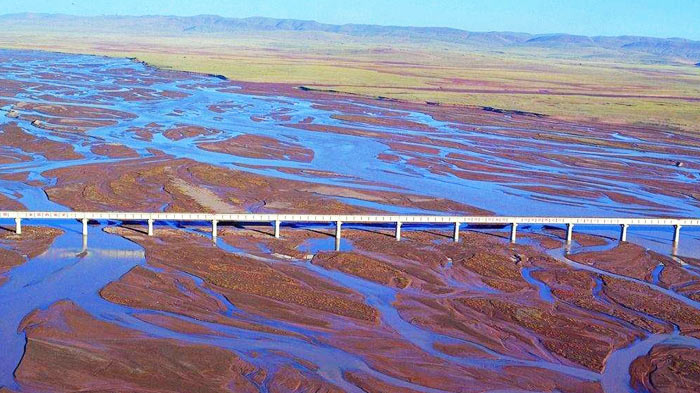 You will have a chance to appreciate the beautiful Tuotuo River along the train from Golmud to Nagchu.

Notice:
Other Tibet trains pass through the Tuotuo River area in the early morning, passengers may miss the chance to enjoy a clear view of the origin of the Yangtze River.

The Cuona Lake is located near the Amdo Railway Station in Tibet. The nearest location of the railway to the lake is about 20 meters. As the train passes by the lake, you can enjoy the scenery of Cuona Lake on board.

If you want to get an in-depth trip to the sacred Cuona Lake, you can get off the train at Amdo Railway Station. However, it should be noted that you need to arrange another vehicle to pick you up at the railway station to the lakeside and take you to Lhasa after visiting Cuona Lake. Moreover, there is only one train reach to Amdo Railway Station on every other day. You need to check the train schedule before you go.

Can I take Tibet train for Nagchu Horse Racing Festival?

Of course, you can. The Nagchu Horse Festival, called “Da Po” in Tibetan language, is a grand traditional festival in northern Tibet. It is held every August 1st in the Western calendar for a period of 5 to 15 days. Tourists who choose to travel to Tibet during the summer holiday must not miss it. 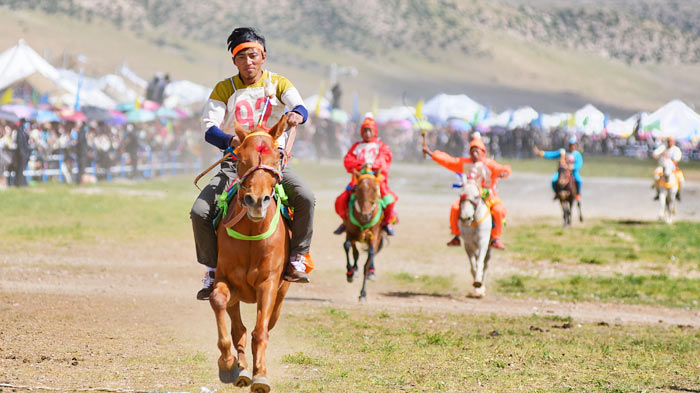 Nagchu Horse Racing Festival is one of the grandest festival in Nagchu, Tibet.

Nagchu and Amdo areas are the best places to experience the life of the herdsmen in northern Tibet. In addition, the source of the rivers such as the Nujiang River and the Yangtze River in the area allows you to experience the chic culture and the beauty of the mountains and rivers. Taking a train from Lhasa to Nagchu is the best way to feel the lively atmosphere of the horse racing festival and enjoy the scenery of the northern Tibetan grasslands.

How to get to Nagchu Town from Nagchu Railway Station?

Nagchu Railway Station is about 8 kilometers southwest to Nagchu Town, close to the Qinghai-Tibet highway. It takes about 15 minutes to drive from the train station to the center of Nagchu Town. If you want to get off the train at Nagchu Railway Station, you can contact us and we will arrange a local tour guide and driver to pick you up at the station and send you to your hotel in Nagchu.

When you take a train to Nagchu Railway Station, no matter in or out there, there is something you won’t miss, such as the Tanggula Mountain Pass, the Tuotuo River Bridge, the Cuona Lake, and kinds of wild animals living in the Hoh Xil Nature Reserve.

And if you plan to take a Tibet train journey to Nagchu for the famous horse racing festival, it is highly recommended to get to Lhasa first, and then take a train to Nagchu from Lhasa, so that you can get used to the high altitude of the plateau during your days in Lhasa. We are already here to help you arrange a lifetime journey to Tibet, as well as apply for Tibet travel permit on your behalf, and book the Tibet train ticket at a better price.

0 Comment ON "Nagchu Railway Station: the closest station to Lhasa on Qinghai-Tibet Railway"