In 2006, after several years of work, the unbelievable Qinghai Tibet Railway opened to the public, carrying tourists and locals to the high Tibetan plateau. Beginning in the Qinghai provincial capital of Xining, the railway line broke records to run from Qinghai province to the Tibetan capital of Lhasa.

Traversing the plateau for a distance of 1,956 kilometers from Xining to Lhasa, the railway climbed over the high Kunlun and Tanggula Mountain Ranges, and crossed the vast plains of the Tibetan plateau, taking around five years just to complete the section from Golmud to Lhasa. The first trains to run the line ran from Golmud to Lhasa, the “Qing 1”, and from Lhasa to Beijing, the “Zang 2”.

Three Extended Lhasa Railway Will Become Available in the Future.

Plans are well underway, in conjunction with the Nepal government and transport department, to continue the railway line from Lhasa to Kathmandu, traversing the plateau from east to west and crossing the mighty Himalayas at one of the highest areas. The train to Kathmandu, which is still in he planning stages at the last notice, will make the connection to Nepal from China more stable, and improve trade between Nepal and China, as well as improving tourist routes from Nepal to Lhasa.

The route of the train to Kathmandu is believed to be following the general route of the G318 Friendship Highway for most of its length. The train route from Lhasa to Shigatse has already been completed, and trains are already running along this section of the route, terminating at the moment in Shigatse City, to the west of Lhasa.

The remainder of the route, which has yet to be completed, has been proposed to cross the rest of the plateau following the rough path of the Friendship Highway. The proposed crossing point of the railway line is at Gyirong Port, which is the current crossing point for overland tourists into and out of Tibet. The route will then descend from the mountains and run to Kathmandu, the Nepali capital. 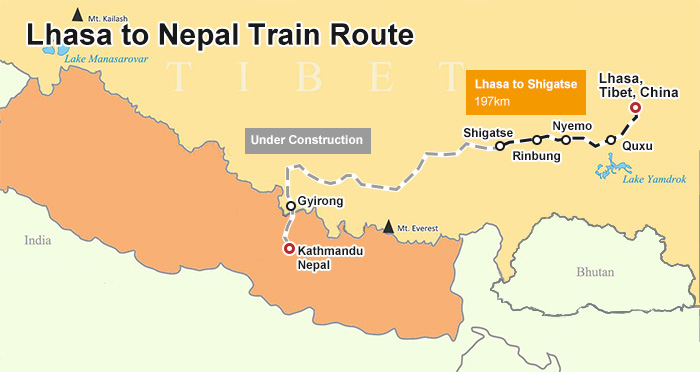 Current way to travel between Tibet and Nepal

Lhasa to Kathmandu by flight
Flights from Lhasa Gonggar International Airport to Tribhuvan International Airport in Kathmandu are one of the most popular ways to travel between Lhasa and Kathmandu, and run several times a day. Flights are run by several airlines, including Air China, China Eastern, Sichuan Airlines, and Tibet Airlines, although the only flights that originate in Lhasa are run by Sichuan Airlines and Air China.

Tickets for the flights to Kathmandu cost from around US$ 400 per person for an economy one-way ticket, although this can go up or down depending on the season. In the winter, it can get as low as around 200 dollars, while in the peak season, it can be much higher due to increased demand. Flights run daily throughout most of the year, and in the lowest months of the year, there are normally only a few flights each week.

Lhasa to Kathmandu by overland driving along Gyirong Port
The other route to get to Lhasa involves a pre-booked tour of the Tibetan plateau, starting in Lhasa and terminating at the border with Nepal, at Gyirong Port. The tours run from as little as seven days to as long as 15 days, and the length of the tour depends largely on what you want to do and see whilst in Tibet.

From Lhasa, after you have toured the city and seen the sights of the Potala Palace, the Jokhang Temple, and other places of interest, runs through Gyantse, the home of the Kumbum, Tibet’s largest stupa, and on to Shigatse, Tibet’s second city. From Shigatse, most tours will include a trip to Rongbuk Monastery and Mount Everest, before continuing on to Gyirong Town. From there, it is a short ride to the border crossing of Gyirong Port, and across the Resuo Bridge to Rasuwagadhi Fort in Nepal. Once over the border, it is a six-hour bus ride from Rasuwagadhi Fort to Kathmandu, along some fairly rough roads for part of the trip.

Recommended Tibet Nepal Travel Route
We have several tours that run from Lhasa to Kathmandu, and you can choose whether to travel to Everest Base Camp before heading to Nepal or not. Our classic tour, the 7-day Lhasa to Kathmandu Overland Small Group Tour, runs along the Friendship Highway from Lhasa to Gyirong Port, a trip of around 900 kilometers. The tour takes you to see many of the most iconic sights of Tibet, from the Tashilhunpo Monastery and the highest monastery in the world, Rongbuk Monastery, to the stunning vista of Mount Everest and the exotic sights of the Kathmandu Valley.

From Lhasa, heading west, there are currently two other lines that are either in construction or being proposed. One runs from Lhasa to Shigatse, to the west, while the other will run from Shigatse to the Chumbi Valley area of Yadong County, close to the border with the Indian state of Sikkim, which also borders with western Bhutan.

The first part of the Lhasa to Yadong line is going to follow the Lhasa-Shigatse railway, which will then branch off and head southwards towards the Indian state of Sikkim. A small county that juts southwards in-between India and Bhutan, Yadong County is a strategic point for crossing the border into India, and a railway service would be a blessing to both tourists and trade partners alike.

However, the railway is still in the planning stages, and construction has not yet started, although it has been reported that the line is expected to be completed by 2020. AS the section from Lhasa to Shigatse is already complete, the remaining section should not be as hard to construct, especially now that the track builders have had plenty of experience in building railway lines in the high-altitude plateau environment. 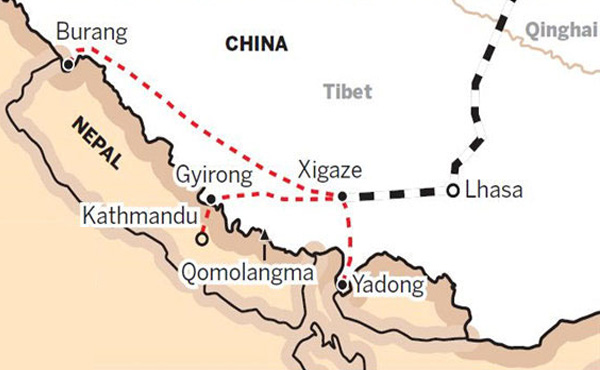 Current way to travel between Lhasa and Yadong

The most popular route to get to Yadong County for now will still be the road from Lhasa to Gyantse, and then turning south along the S204 Provincial Road to Yadong Town, close to the border with Sikkim. The road from Lhasa to Yadong is around 481 kilometers long, and driving this route takes around 11 hours of non-stop driving. Realistically, it will take 2-3 days to make the trip to Yadong County from the Tibetan capital. Having a railway line would cut the travel time down to less that 5 hours in tota even though it will travel through Shigatse instead of Gyantse.

IN Tibetan, Yadong means “rushing deep valley”, and it is indeed a deep valley area, with rich flora and fauna abounding across the county. Chumbi Valley, the most popular place in Yadong, is a lush and verdant place with some stunning views and beautiful countryside. Popular tourist attractions for the few people that venture this far south in Tibet, include the Donggar Monastery, the Garju Monastery, and the stunning Kangbu Hot Springs, which are one of the most popular attractions with Chinese tourists to the area.

Hotels and Accommodation in Yadong County

The second major railway to enter Tibet from mainland China is the Sichuan Tibet Railway, which will eventually run from Chengdu in Sichuan Province to Lhasa, the Tibetan capital. This is being built in two sections, starting from each end, and the most important part, for those in Lhasa, is the section from Lhasa to Nyingchi Prefecture in southeast Tibet.

Chengdu to Lhasa train is one of the most popular routes to get to Tibet presently, which will arrive in Xining via Xian firstly. When the Sichuan Tibet railway is finished, it saves several hours to reach.

Construction on the railway line from Sichuan to Lhasa began in 2014, and the section from Lhasa to Nyingchi is already well under way, and is expected to be completed on schedule in 2020. The construction of the line came after the completion of the Qinghai Tibet Railway, which proved that a high-altitude railway to the Tibetan plateau was possible.

The route from Lhasa to Chengdu is expected to be completed within the decade, and has been predicted that it will cut down the travel time from Sichuan Province to Lhasa to just 2-3 hours. Currently, it takes around 8-9 hours on a bus to get to Lhasa via the Sichuan Tibet Highway or the Yunnan Tibet highway. 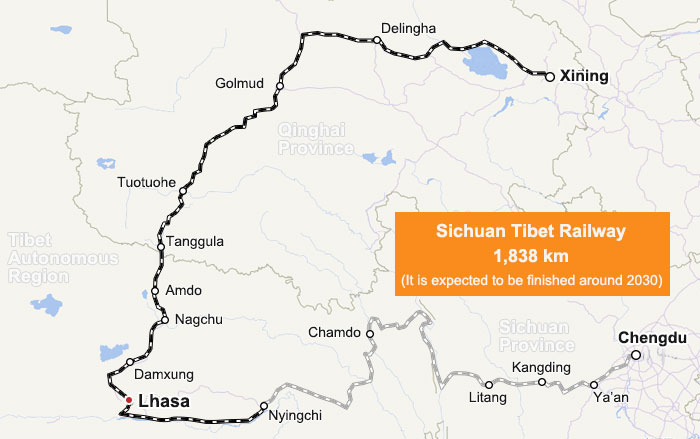 Current way to travel between Lhasa and Nyingchi

Lhasa to Nyingchi by flight
Currently, flights to Nyingchi from Lhasa run daily, with one flight per day, to the Nyingchi Mainling Airport, which takes around 40 minutes. The airport lies around 50 kilometers from downtown Nyingchi, and there are two shuttle buses that run between the city and the airport daily. Tickets for the flight start from around 1,500 CNY, and the flight leaves at 10:05am daily.

Lhasa to Nyingchi by overland driving along G318 National Highway
Taking the highway to Nyingchi is the most popular route from Lhasa, which follows the G318 National Highway, of which the Sichuan Tibet Highway is a part. Thousands of people take the trip every year, passing through some of the most stunning scenery of the Lhasa River valley and on to the beautiful countryside of Nyingchi prefecture. The route is more than just a drive, though, and you can stop off at the many places along the way to get a better view of the scenery and the stunning landscapes, and make a full day-long road trip of it.

Recommended Lhasa Nyingchi Travel Route
There really is only one route to Nyingchi from Lhasa, which runs along the G318 National Highway. However, there are actually two routes for the G318, the north and the south routes. The northern route is the most scenic, but for the trip to Nyingchi, it is a more “roundabout” route, as it passes through Chamdo, and would have to double back on itself along the southern route heading west to get to Nyingchi.

The southern route starts in Lhasa, and passes through several small towns and villages before it reaches Bayi Town and finally Nyingchi. The route is now much better than it used to be, with asphalted highways all the way to Nyingchi. A new highway is currently being built along the same stretch, connecting Lhasa and Nyingchi, which will be a superhighway that will cut the driving time down to just five hours. This new High-Grade Highway is already under construction, and the section to Bayi Town is already open for traffic. The remaining stretch, to Nyingchi, is expected to open soon.

Check for the most popular Lhasa Nyingchi tour itineraries here.