1. Travel from Hong Kong to Lhasa by Train

2. Travel from Hong Kong to Lhasa by Flight + Train

3. Travel from Hong Kong to Lhasa by Flight

Travel from Hong Kong to Lhasa by Train

Every day, there are 34 high-speed trains from Hong Kong West Kowloon to Guangzhou South Railway Station from 8:05 to 22:50, at least 2 trains every hour. The ride takes about 1 hour and 215 yuan for a second-class seat ticket.

The Guangzhou-Lhasa Train Z265 departs daily at 11:45 from Guangzhou Railway Station and arrives at Lhasa Railway Station at 16:45 on the third day after 53 hours, covering a distance of 4,980 kilometers and being the longest railway route to Lhasa. That’s to say, you’ll spend the next two days from the south all the way to central and western China and enjoy the bigger picture of the most diversified landscapes and cities in China. If you are a big fan of train journey, this travel route to Tibet will be the ultimate journey you are looking for.

Thanks to the high-frequency of high-speeds train between Hong Kong and Guangzhou, tourists can choose to board Tibet train on the same day or explore Guangzhou for a few days before heading for Lhasa, making this railway route become the most convenient one from Hong Kong to Tibet. - Check the details of Guangzhou Tibet tour packages.

G80, the only train from Hong Kong to Beijing, departs at 8:05 every morning from West Kowloon and arrives at Beijing West Railway Station at 17:01. The ride takes 8:56hrs and 1,077 yuan for a second-class ticket. You can choose to board the Beijing-Lhasa Train Z21 at the same station at 20:00 and arrive at Lhasa Railway Station at 12:45 two days later, after 40:45 hours’ ride through 3,757 kilometers over 8 provinces between the Beijing and Lhasa. Or you can spend a few days in Beijing and tour around Forbidden City, Summer Palace, Great Wall, and Tiananmen Square before heading to Tibet. - Check the details of Beijing Tibet train tour packages.

G320, the only train from Hong Kong to Chongqing, departs every day at 14:53 from West Kowloon and arrives at Chongqing West Railway Station at 22:26. This ride takes 7:33hrs and 660 yuan for a second-class ticket.

Then you can stay overnight around this station and spend a whole day to explore this famous “Mountain City” before going back to board the Chongqing-Lhasa Train Z223 at 22:12, you will arrive at Lhasa Railway Station at 9:55 on the third day morning after 35:43hrs. This is the shortest Hong Kong-Lhasa train route with about 43 hours on trains in total. - Check the details of Chongqing Tibet train tour packages.

G100, the only train from Hong Kong to Shanghai, departs every day at 11:10 from West Kowloon and arrives at Shanghai Hongqiao Railway Stationat at 19:27. The ride takes 8:17hrs and 1,008 yuan for a second-class ticket.

Since the Shanghai-Lhasa train departs at 20:08 from Shanghai Railway Station about 20km away, travelers have to stay overnight in Shanghai. We warmly suggest you stay around Shanghai Railway Station because it is located in downtown and about 8km from the Bund, Yu Garden, Oriental Pearl TV Towel, and Shanghai Museum. You can visit these famous attractions in the daytime, get on Shanghai-Lhasa Train Z164 at 20:08, and reaches Lhasa Railway Station at 19:35 two days later after 47:27 hours. - Check the details of Shanghai Tibet train tour packages.

There is no need to worry about the above procedure because all the signs are in Chinese and English. You can also ask the station staff in an orange T-Shirt for help if needed.

3. How to go through customs at West Kowloon Railway Station?
West Kowloon Railway Station adopts a co-location arrangement. For those bound for mainland China, after arriving at the Departure Hall on level B3, you need to go through Hong Kong Immigration Departure Clearance, show your passport to the staff and pass through the Customs Clearance Area. Then walk down a long corridor to enter into the Mainland Port Area to have your visa and passport checked. Then you go through the Customs Procedures Area, and then wait for the gates to the train platform to open. 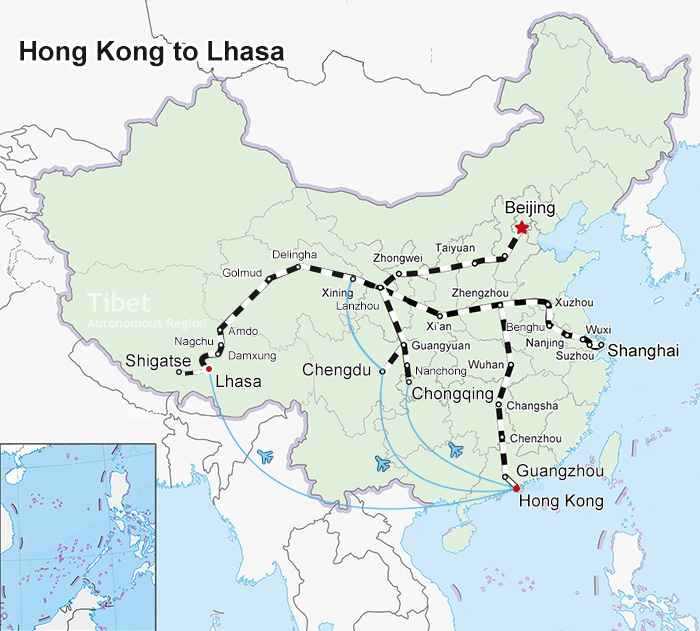 Multiple options to travel from Hong Kong to Tibet

Travel from Hong Kong to Lhasa by Flight + Train

If you are interested in experiencing the marvelous Qinghai-Tibet Railway but don’t want to spend so much time on train, taking flight from Hong Kong to Tibet entry cities like Beijing (about 3 hours), Shanghai (about 2.5 hours), Chengdu (close to 3 hours), Chongqing (about 3 hours), and Xian (about 3.5 hours), and boarding train there to Lhasa is a good choice. Here are two carefully selected travel routes for you based on the flight frequency, train travel time, tourist attractions, and travel budget.

There are 4-5 direct flights from Hong Kong International Airport to Chengdu Shuangliu International Airport every day, and the ride takes about 3 hours. Which means, you can board the Chengdu-Lhasa train Z322 at 21:37 on the same day, and arrive at Lhasa Railway Station at 9:55 on the third day morning after 36:18hrs on the train.

We also suggest you linger on Chengdu for a few days before heading for Lhasa. Reputed as “the Land of Abundance”, Chengdu is quite worth a visit to see the cute giant pandas, visit the historic Wuhou Temple, taste the delicious hot pot and Sichuan cuisine, and experience the leisurely lifestyle of this beautiful city. - Check the details of Chengdu Tibet train tour packages.

Xining is the initial point of Qinghai-Tibet Railway (Qingzang Railway) and the closest gateway city to Tibet. It only takes you around 21 hours from Xining to Lhasa by train. That’s to say, the total time you need to spend on plane and train is about 25.5 hours. Meanwhile, you can stay in Xining (2,275m) for around 2 days to visit Kumbum Monastery and Qinghai Lake, and adapt to the high altitude before heading for Tibet.

Travel from Hong Kong to Lhasa by Flight

Traveling by flight is the best choice for those with a tight schedule, especially for the elderly or small children, the lengthy train ride could be a huge challenge and potentially make them feel restless and drained. With the direct Hong Kong-Lhasa flight operating in Nov 2019, traveling from Hong Kong to Lhasa has become very convenient. Below are the top flight routes we recommend for you:

After taking direct Hong Kong-Chengdu flight, you can tour around Chengdu and the surroundings, like Jiuzhaigou, Mt. Emei, Leshan Giant Buddha, etc., then board on the flight to Tibet. There are 14 direct flights from Chengdu to Lhasa running from early morning to midnight with the duration around 2 hours. If you regret missing the breathtaking scenery along Qinghai-Tibet Railway by taking a flight journey, you can board Tibet outbound train when the tour ends.

The constant opening of new air routes and great changes have taken place in railroad transportations facilitate our trips with a variety of possible travel routes, making the distance between the departing place and the destination shortened by spending less time on it. No matter how you plan to travel from Hong Kong to Lhasa, we will provide wholehearted services to you. Just feel free to contact us and share your travel plan, our travel consultant will tailor make the most suitable route and travel plans for you.

0 Comment ON "Hong Kong to Lhasa Train: Is There a Direct Train from Hong Kong to Tibet?"