Qinghai-Tibet Highway starting from Xining to Lhasa (1,937 km), was built from 1950 to 1954 in order to support the Chinese People's Liberation Army into the Tibet. Xining to Lhasa road is a main state secondary road with 10 metres wide roadbed. And it is one of the highest and longest highways in the world, also the shortest, busiest and safest road to Tibet in China. So it will be easy to do the journey of Xining to Lhasa overland and Qinghai-Tibet Plateau is not a dream for you. Qinghai-Tibet Line crosses many mountains and rivers, such as Kunlun Mountain (4,700 metres), Tangula Mountain (5,515 metres), Tongtian River and Tuotuo River. Besides, you can view grasslands, salt lakes and desert and so on.

▲ The Best Travel Time: the road is available all the year, but the best time is from May to September for tourists.
▲ The Feature of scenery: the natural landscape are various along the road line, such as mountains, grasslands, rivers and desert.
▲ The Feature of culture experience: many historic sites can be seen and you can totally feel the Tibetan life style in the Tibet plateau.
▲ Tips: the altitude sickness may happen to you, so remember to bring some medicine like Rhodiola Rosea. Enough water and food are also necessary. Besides, you should prepare enough clothing because the altitude is high in Wudaoliang and Tangula pass and it may snow.

I am sure the journey would be more comfortable because of the better road condition. By the way, you can contact with us if you want to make your journey more perfect. Ok, just let's give you a brief introduction about Golmud to Lhasa route now. 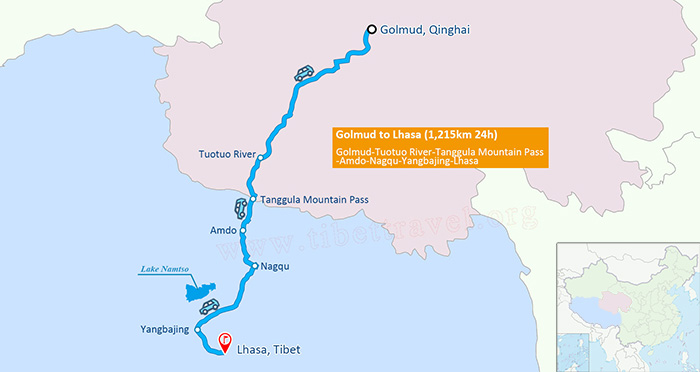 The journey starts from Golmud which is a new industrial city as well as the second largest city in Qinghai and the third largest in the Tibetan Plateau. There are two must-see places in and around Golmud, that is, Qarhan Salt Lake and Hu Poplar Woods. 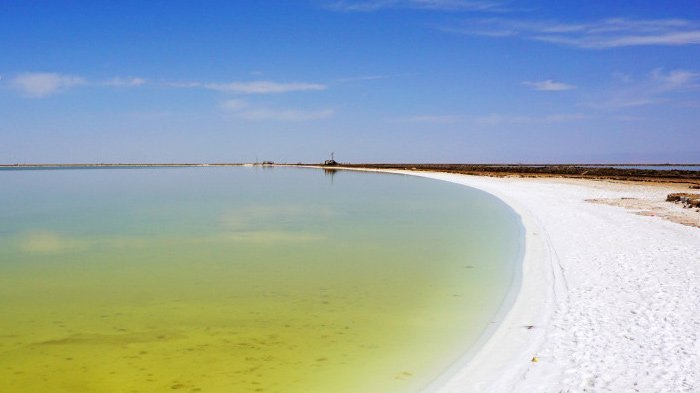 Qarhan Salt Lake, covering an area of 5,800 square kilometers, is located in Golmud. It is one of the most famous inland salt lakes and the biggest one in China. The plants are hardly grow around the lake, but plenty of salt flowers are formed there. This lake attracts thousands of tourists at home and abroad. 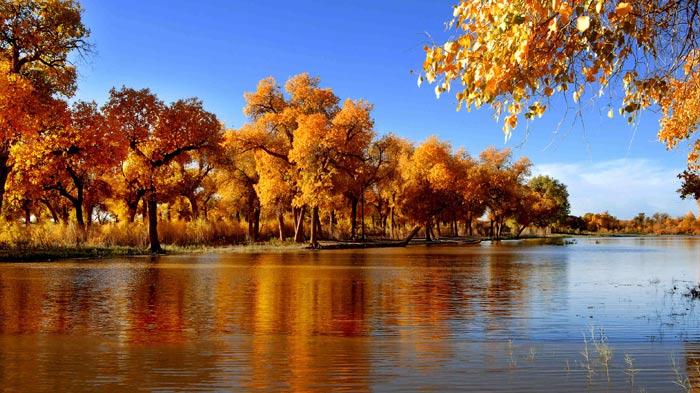 Hu Poplar Woods are 60 km away from Golmud city center. The natural scenery is so beautiful that you cannot help to take some photographs.

Nachitai, at an elevation of 3,700 m, is 90 km away from Golmud. It will not be difficult and tired for you to get there. This area is where Kunlun mountains lies, so the famous Kunlun Mountain Pass, at an elevation of 4,200 meters and 160 km away from Golmud, is close to you now. That is to say the oxygen is more thinner here. In this case, headache and dizziness may happen to you, so I advise you to stay overnight and have a good rest to acclimatize it. 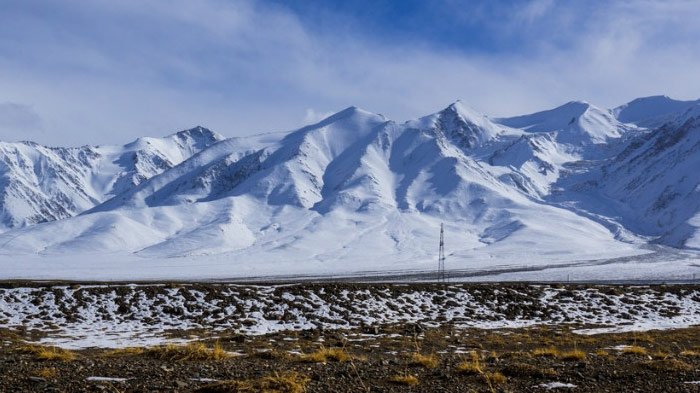 And I think it's necessary to recommend the Yuzhu Peak to you, which is the main peak of Kunlun mountain. It is at an elevation of 6,178 metres and covered by snow all through the year, so you can view glaciers there.

It will be Wudaoliang after crossing Chuma'er River. This area is rather desert, and the weather is quite changeable. The average temperature is 5.5 degrees centigrade even in July, and it snows often. But you are get near to the Hol xil area which is a no-man's area with many rare animals living there, such as camels, antelopes and yak. 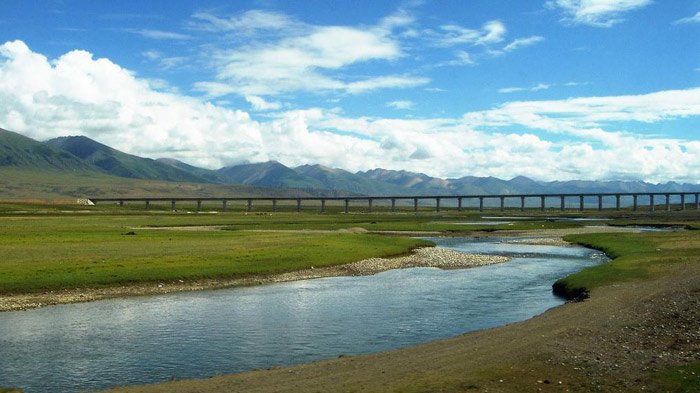 There is a well-known bridge in the Hol xil area, Qingshui River Bridge, at an elevation of 4,600 m. It's the longest bridge crossing over the plateau permafrost and nature reserve in china. Its total length is 11.7 km, and there are more than 1,300 archways for animals to pass through. I am sure you will feel good when walking on the bridge. 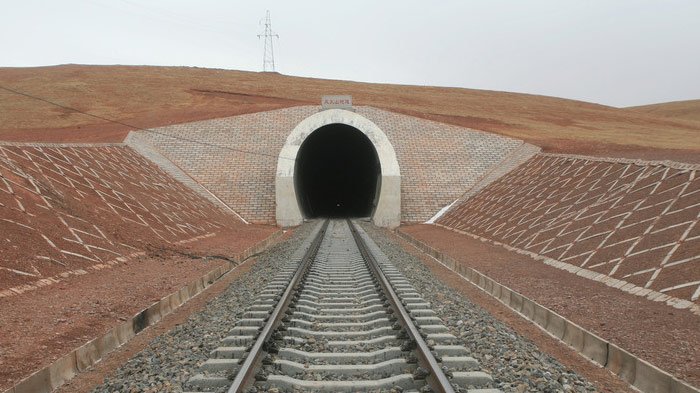 Except Qingshui river bridge, there is a famous tunnel in Hol xil area, Wind Volcanic Tunnel, which is a railway tunnel with a length of 1,338 m and the highest permafrost tunnel in the world, so I don't think you want to miss it.

It's 153 km from Wudaoliang to Tuotuo River, the headwater of Yangtze River, and it rises from the 6,621-metre-high Geladong Mountain. What's more, it becomes Tongtianhe River when it meets with Dangqu river, and it becomes Jinshajiang River when it flows into Sichuan and Yunnan province. You can enjoy the river scenery when you cross over the Tuotuo River Bridge, and you can stay overnight in the town of Tuotuo river, but the condition is a little bad. 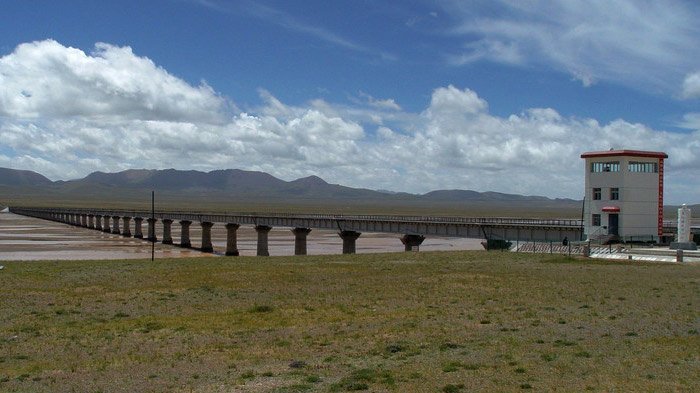 Keep moving to south, you will get to Tanggula Mountain Pass after passing by the Buqiangge station. The Tangula Mountain pass is the highest point (5,231 m) of Qinghai-Tiebt Highway. The natural environment is harsh there, with frozen earth and low temperature all the year round, and the weather is rather changeable. For example, it often snows in summer. Most importantly, the oxygen is only as 60% dense as that in the horizontal area, therefore most of the tourists will suffer from altitude sickness when getting there. But I don't think it will be a big problem for you. I guess you will still be excited when you see the stone monument of "Tanggula Mountain Pass, 5,231 meters above the sea level". 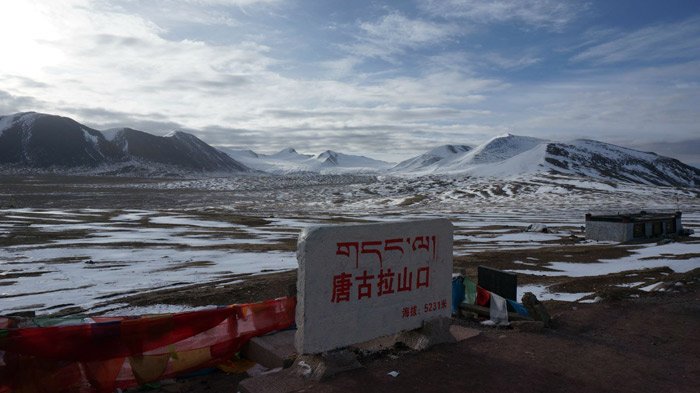 Leaving Tanggula Mountain Pass and just travelling another 91 kilometers, your next stop, will be Amdo where you can visit Cuona Lake. The Cuona Lake is the headwater of Nujiang river, at an elevation of 4,800 metres. It's the highest fresh water lake in the world. Moreover, it is the scared lake for local Tibetan, and the scenery is beautiful there. 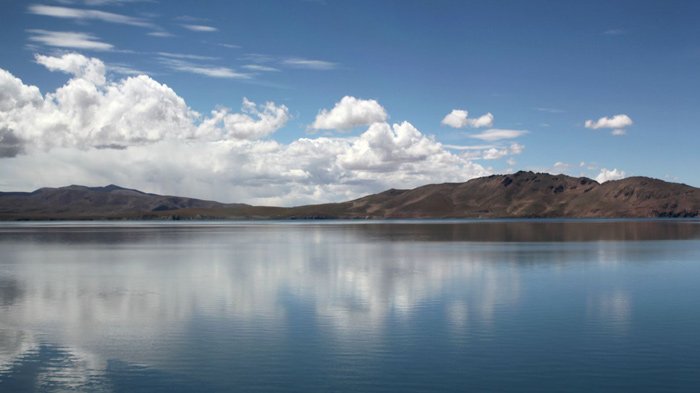 It will be Nagqu after you leave Amdo and keep moving for 129 kilometers. At the same time, the elevation will lower down gradually. Nagqu, at an elevation of 4,600 meters, means "black river" in Tibetan language. Especially, the horse racing festival in Nagqu is held between August and September, so it is really worth your visit.

Ok, the good news is that you will get to Lhasa in 7 hours, and the distance is 320 kilometers. And the must-see scenic spot is Namtso Lake, which is a mountain lake on the border between Damxung County of Lhasa Prefecture and Baingoin County of Nagqu Prefecture. This salt lake at an elevation of 4,718 m is the second largest lake in the Tibet Autonomous Region. What's more, Namtso is renowned as one of the most beautiful places in the Nyainqentanglha mountain range. 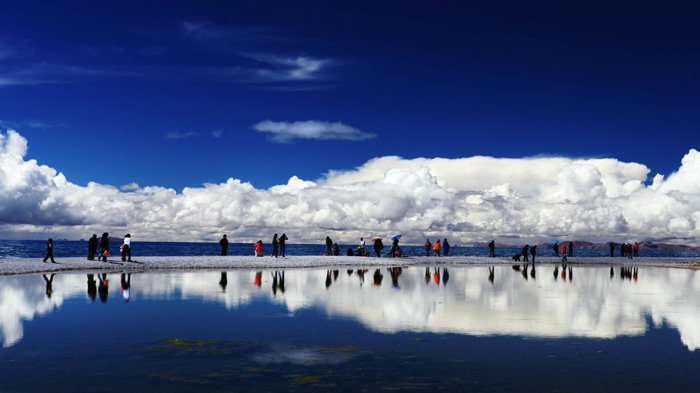 Ok, the last destination is not far from you now, your dream is coming true. I guess you must be a little tired, but don't worry, because you can have a wonderful hot spring in Yangpachen, about 245 km away from Nagqu. Yangbajing is a town approximately 87 kilometers (54 miles) north-west of Lhasa. It is famous for the Yangbajing hot springs and power station. 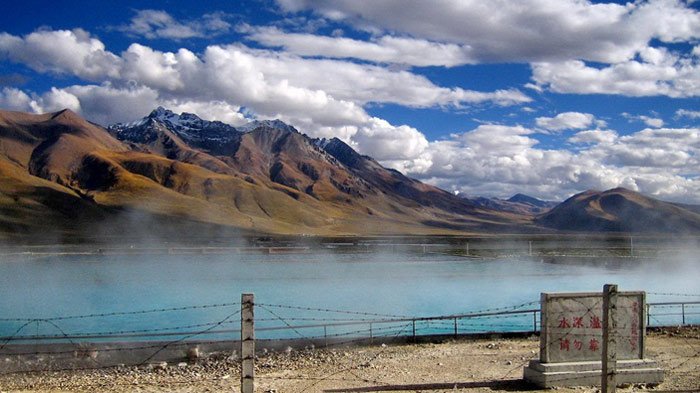 Yangbajing Hot Springs Field is at an altitude of 4,290-4,500 m, which makes it the highest altitude set of hot springs in China, and possibly in the world. The power station have been harnessed to produce much of the electricity for the capital Lhasa, so it is very important for local people.

After the wonderful hot springs, more 75 kilometers, you will get to Lhasa, which is the political, economic and cultural center as well as the Administrative capital of Tibet Autonomous Region. And Lhasa is one of the highest cities in the world. You can tour around Lhasa city and visit culturally significant Tibetan Buddhist sites such as the Potala Palace, Jokhang and Norbulingka palaces, and many other scenic spots. 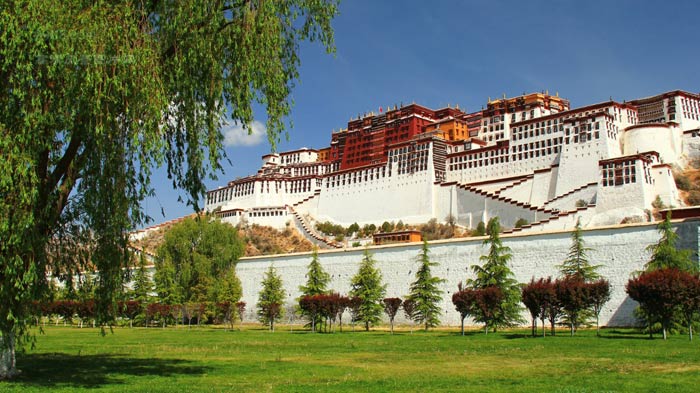 It's no doubt that the Potala Palace is a must-see site, which firstly was built by Tibetan king, Songtsen Gampo, as a present for his bride princess Wen Cheng of Tang dynasty. 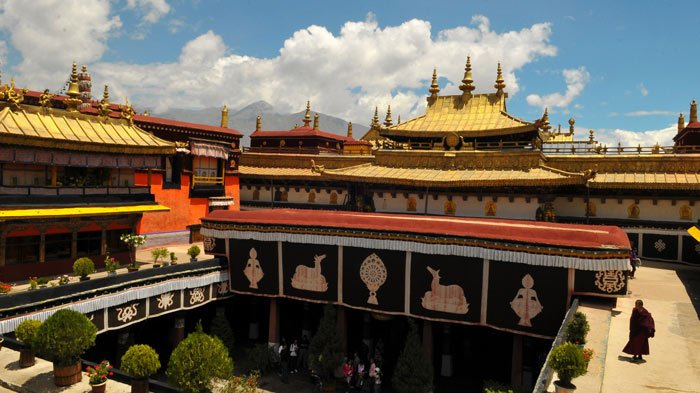 Besides the Potala Palace, Jokhang Temple is also a mark of Tibet, which is located on Barkhor square. It is the most scared and important temple for local Tibetan people. What's more, the temple's architectural style is a mixture of Indian vihara design, chinese Tang Dynasty design, and Nepalese design. It was found during the reign of king Songsten Gampo. It is said that it was built for the two brides of the king, Princess Wencheng of the chinese Tang Dynasty and Princess Bhrikuti of Nepal. Both wives are said to have brought important Buddhist statues and images from China and Nepal to Tibet. 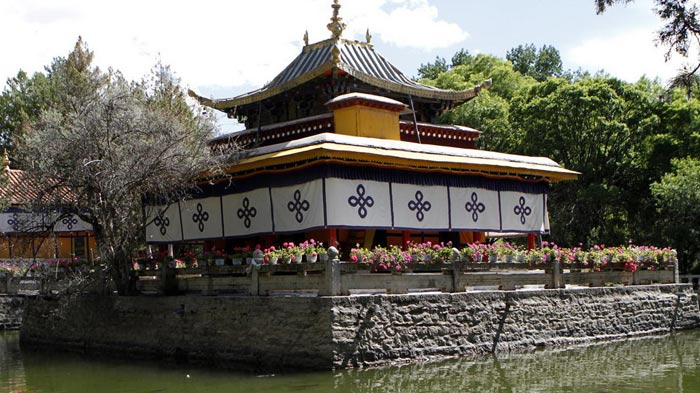 Another must-see place is Norbulingka, which is a palace and surrounding park in Lhasa. It served as the traditional summer residence of the successive Dalai Lamas from the 1780s up until the 14th Dalai Lama who was exiled in 1959. Norbulingka palace is also recognized as a UNESCO World Heritage Site.

It is just the beginning of your Tibetan journey when you get to Lhasa. There are still so many wonderful scenic spots and cultural sites waiting for you there. I can not list all them out, so just enjoy yourself. 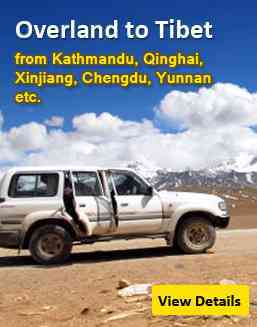