Tibet and Nepal are two of the most spiritual of the Himalayan Kingdoms, and are often traveled together, as part of one long tour of both. The capital cities, Lhasa and Kathmandu, are well known for their stunning monasteries, magnificent Himalayan peaks, and for being the religious and spiritual centers of their respective kingdoms. With a linear distance of 603.5 kilometers (375 miles), and an overland distance of around 1300 kilometers (808 miles), these two neighbors are frequently visited together. You may choose to travel between these two places by tour vehicle, flight, public bus and even cycling for outdoor enthusiasts. Follow our guide and which way suits you best.

Kathmandu to Lhasa Distance by Overland Drive: 1300KM and How to Travel

One of the best and easiest ways to travel to Lhasa from Kathmandu is by taking an overland tour. Traveling overland from Kathmandu means that you will get to see all of the stunning sights of the plateau along the way, and can finish your tour in Lhasa, the s pectacular City of Sunshine. The overland distance from Kathmandu to Lhasa is around 1300 kilometers (808 miles), and takes from around seven days to complete the journey, though it can take longer depending on where you are visiting along the way. 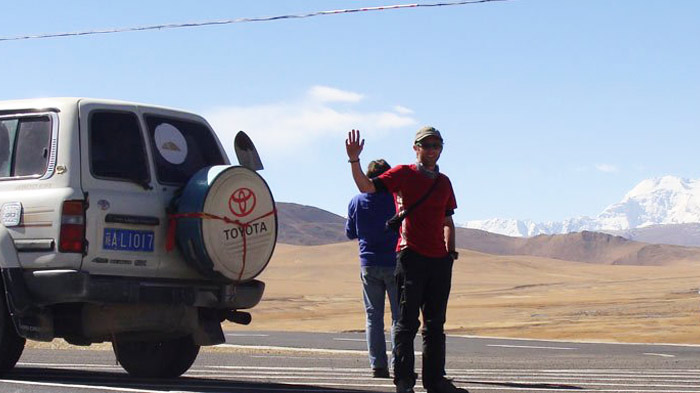 The overland distance from Kathmandu to Lhasa is around 980 kilometers and takes around 7 days.

The normal route from Kathmandu to Lhasa starts with the bus ride to Rasuwa Gadhi, the Nepali border checkpoint opposite Gyirong Port. Once across the border, the route takes you to Gyirong Town to acclimatize for a day, before heading east along the G318 to Shigatse. This route to Tibet’s second city follows the Friendship Highway as far as Shigatse, then turns off to head for Gyantse, after which you travel past the stunning Lake Yamdrok and on to Lhasa.

Traveling overland to Lhasa from Kathmandu along the highways is best done from April to the end of October, when the weather is best and there is no heavy snow in the mountains. The main benefit of taking this overland route to Lhasa is that you can cut out the need to fly in to the Tibetan capital, and it allows you to continue your tour further on into China by taking the train from Lhasa to one of the seven Chinese gateway cities across the country. The only disadvantage is that, if you are traveling as part of a group, the whole group must enter and exit Tibet in the same way at the same time.

The required documents are also a disadvantage, especially since you need almost every pass and permit issued by the Chinese government and the Tibet Tourist Bureau to just make it across the border. As always, the Tibet Travel Permit is a requirement, as is the Alien’s Travel permit for travel in Tibet’s open areas outside Lhasa. However, you will also need the Frontier Pass, which is required for all travelers that are traveling close to China’s borders with India, Nepal, and Bhutan.

The only permit you will not need is the Restricted Areas Permit, unless you are planning your trip to Lhasa to include a side journey to Mount Kailash and Lake Manasarovar. However, you will not need to get a Chinese Entry Visa, as the Group Tourist Visa is applied for on your behalf by us once you arrive in Kathmandu.

Kathmandu to Lhasa Flight Distance: 603.5KM and How to Travel

The actual flight distance between Lhasa and Kathmandu is listed by most airlines as 600 kilometers, though in actuality it is 603.5 kilometers (375 miles). The route of the flights to Lhasa from Kathmandu runs directly over the summit of Mount Everest, and if you are on the left side of the plane, you get a great aerial view of the mountain as you pass above it. There are several flights a day from Kathmandu’s Tribhuvan International Airport to Lhasa Gonggar International Airport, and it is regarded as the fastest way to get to Lhasa from outside China. 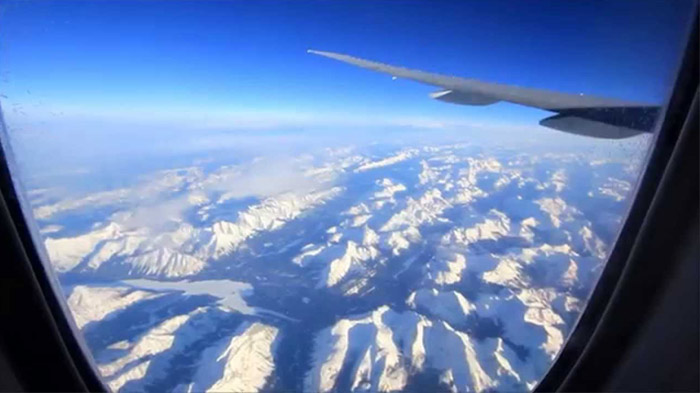 You will get a great aerial view of the mountain when you are on the left side of the plane from Kathmandu to Lhasa.

While it may not be the cheapest way to get to Tibet’s capital, with flights costing between 200 and 400 dollars, depending on the season, there are many benefits to traveling to Lhasa by flight. Whilst there may be some trouble crossing the Himalayas via Gyirong Port in the depths of winter, there is rarely any problem when flying, unless the weather is extremely bad. This means you can still get to Lhasa from Kathmandu, even when the deepest snowfalls have closed the roads.

When traveling overland to Tibet from Nepal, you are required to have all the necessary documents for your trip before leaving Kathmandu. The same is true of the flights. While you will not touch Tibetan soil until you land in Lhasa, you are still required to have the documents for travel in Shigatse Prefecture and close to the Sino-Nepal border before the flight leaves for Lhasa.

Acclimatization when flying from a low-lying airport to Lhasa is important, as you will not be able to acclimatize at an intermediate elevation along the way. Cabins on the flights are pressurized, so the pressure in the plane is the same as the air pressure at the departure location. Once you land, it is normal for most international travelers to experience some of the symptoms of altitude sickness. You should spend the first couple of days allowing your body to acclimatize to the higher altitude, with plenty of rest, avoiding strenuous exercise, and refraining from smoking and drinking when on the plateau, as these can exacerbate the symptoms.

Kathmandu to Lhasa by Bus Distance: 980KM and How to Travel

While not available to international travelers, there is a bus that runs from Kathmandu direct to Lhasa, which takes around 12 hours to traverse the plateau on this 980-kilometer trip. The route of the bus follows the Friendship Highway once you have passed Gyirong Town along the G214. The road goes through Tingri and Shigatse on the way to Lhasa, stopping at various points for toilet breaks and food. 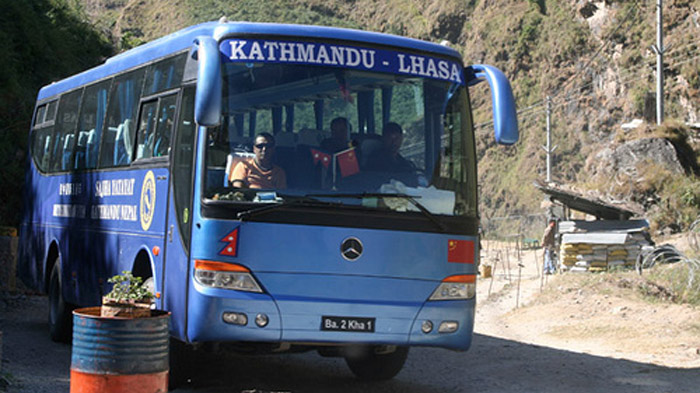 The bus from Kathmandu direct to Lhasa is not available to international travelers.

Since only Chinese citizens can travel the route by public bus, the only documents required are your passport, for re-entry into China at the border crossing of Gyirong Port. International travelers are required to have a pre-booked tour before entering Tibet, and are not permitted to use public buses, except in the area of Lhasa city limits.

The trip by bus is best done from April to December, as the weather in the Himalayas from January to March can be dangerous for road travel. Snow is common in the high mountain passes on the Tibetan side of the Sino-Nepal border, and can block the roads making travel impossible.

Kathmandu to Lhasa by Cycling Distance: 13,200KM and How to Travel

Traveling to Lhasa from Kathmandu by bicycle is one of the most adventurous tours on the plateau. Covering the route from Kathmandu, through Gyirong Port, Tingri (with a side trip to Mount Everest), Shigatse, and Gyantse, the overall cycling distance is a little over 13,200 kilometers, and takes around 13 to 16 days to traverse the plateau. 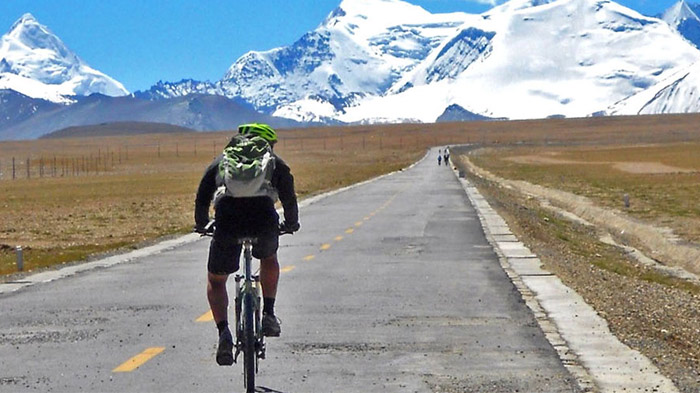 Traveling to Lhasa from Kathmandu by bicycle is over 1,3200 kilometers and takes around 13 to 16 days.

Cycling is one of the best ways to see the stunning sights of the Tibetan plateau up close, and gives you a little more freedom to stop and admire the scenery whenever you want. However, it is an arduous ride that heads to very high altitudes along the way, with several of the passes, and the trip to EBC, reaching elevations well above 5,000 meters. Proper acclimatization should be followed once you get to Lhasa, before traveling further, and at other times where your journey takes you higher than 500 meters above the altitude of the Tibetan capital.

The documents required for this epic adventure are the same as those for any overland trip between Tibet and Nepal. Instead of a Chinese Entry Visa, you will need to have the Group Tourist Visa for entry into Tibet from Kathmandu, as well as your Tibet Travel Permit already in hand. There are also requirements for other permits, such as the Alien’s travel Permit for traveling in Tibet outside Lhasa, and the Frontier Pass, for those traveling in Tibet close to the borders with India, Bhutan, and Nepal.

It is advisable not to undertake this awesome endeavor in the winter and summer months, as the cold and rain can be a little more dangerous when riding a bicycle across the plateau. April to early June and Sept. to the Oct. are the best time to make the journey, as the weather is pleasant when riding, but not too cold when you stop. However, it is still advisable to have a warm fleece jacket to put on over your cycling clothes when you stop.