Currently, there are 7 major railways that run from inland China to Tibet, namely Beijing-Lhasa , Shanghai-Lhasa,Guangzhou-Lhasa,Chengdu-Lhasa,Chongqing-Lhasa,Lanzhou-Lhasa,Xining-Lhasa. Yet, the very Qinghai-Tibet railway starts from Xining to Lhasa, and all the other 6 railways converge in Xining and head for Lhasa. Here are the 7 major railway maps for Tibet. a. So far the quickest and most convenient access to Lhasa
b. Most of the supreme natural scenery lies
c. The beginning of Qinghai-Tibet railway

Train Station: Starting from Xining, the train passes 5 stations to Lhasa, with Tanggula Mountain Pass being the highest station. 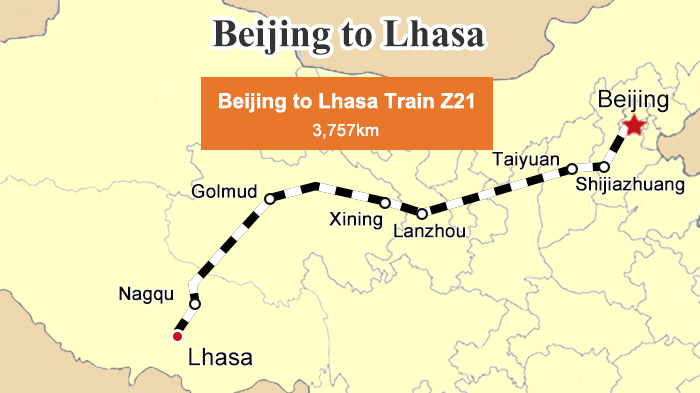 a. Tour many historic sites in the capital of China, Beijing
b. Best start for China-Tibet-Nepal Tour (Beijing→ Lhasa→Nepal)

Drawback: To individual travellers, it is extremely difficult to get train tickets.

Train Station: All together there are 10 stations along the railway line and the major scenery won’t appear until the train enters Golmud.

Major Attraction: Major Attraction: Most of the major attractions overlap with that of Xining-Lhasa train as the train enters Tibet region and tourists will see a variety of natural features and be impressed by how vast China is. 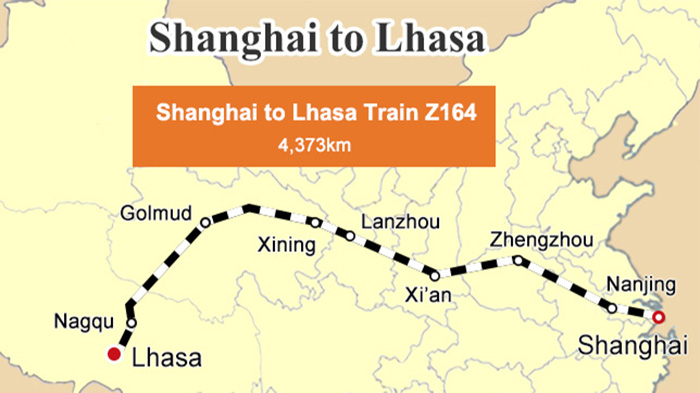 a. Tour Shanghai, a metropolitan city of fine integration of East and West
b. Better acclimatization to the altitude change
c. Being able to cross the mainland China and experience the varied topography

Drawback: Tourists have to endure the long ride and it’s a challenge to one’s physique.

Train Station: Overall, there are 12 train stations along the railway line. In this particular railway route, many businessmen and tourists may board this train for sightseeing and visiting relatives.

Major Attraction: The eye-catching scenery comes into sight as the train passes Golmud. Basically, major attractions will be seen from Golmud to Lhasa.

If you have more specific questions concerning your train journey or tour to Tibet, please feel free to send us your inquiry. We are ready to help you out. 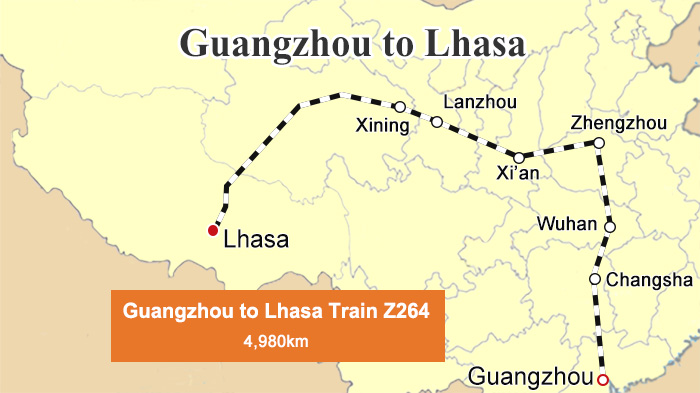 Distance:4980km
Benefit:
a. Cross the central region of mainland China  (Not recommended)
b. Enjoy the Cantonese food on board
c. Being able to see the most diverse landscapes and cities in China

Drawback: It is fairly time-consuming as Guangzhou--Lhasa is the longest railway route to Tibet.

Train Station: There are 10 stations to pass along the railway line.

Major Attraction: The initial part of the ride will be mundane and the real sights such as Qinghai Lake ,won’t be visible after the train leaves Xining and heads to Lhasa. 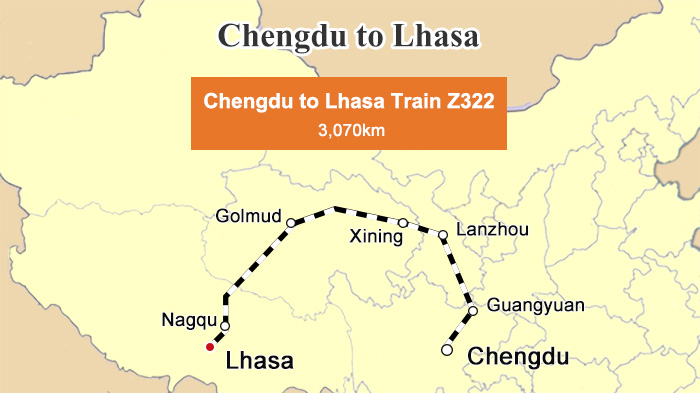 Distance:3360km
Benefit:
a. Easier to get train ticket
b. Quick and easy access to Tibet
c. Enjoy giant pandas and taste spicy hot pot in Chengdu

Train Station: There are 8 stations in total along the railway line. 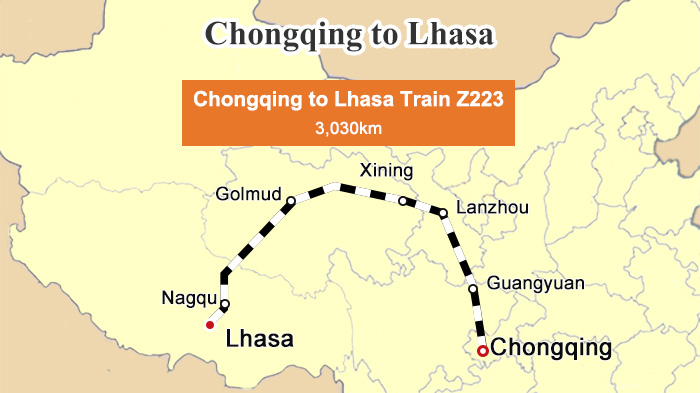 Distance:3654km
Benefit:
a. Easier to get train ticket
b. Quick and easy access to Tibet

Train Station: There are 10 major stations along Chongqing-Lhasa railway line.

Major Attraction: Chongqing is a city known for its spicy and tasty hot pot and beauty. The major natural scenery of this railway can be seen from Xining station. 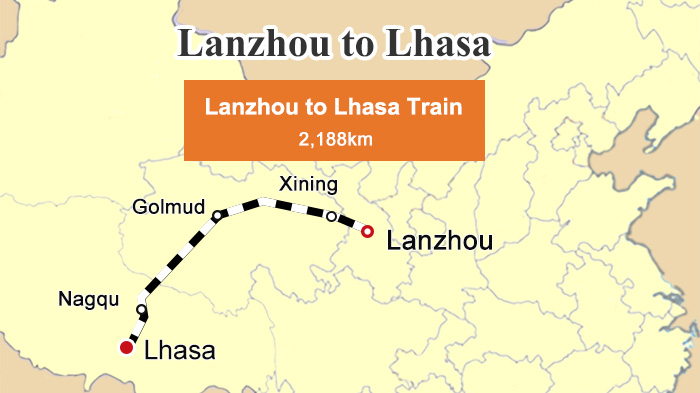 Benefit:
a. Easier to get train ticket
b. Quick and easy access to Tibet

Train Station: There are 7 stations along the railway line and it is the quickest access to Lhasa  next to Xining-Lhasa railway.

Major Attraction: Shortly after the train enters Xining, the scenery tourists may see is the same as that of Xining-Lhasa railway. 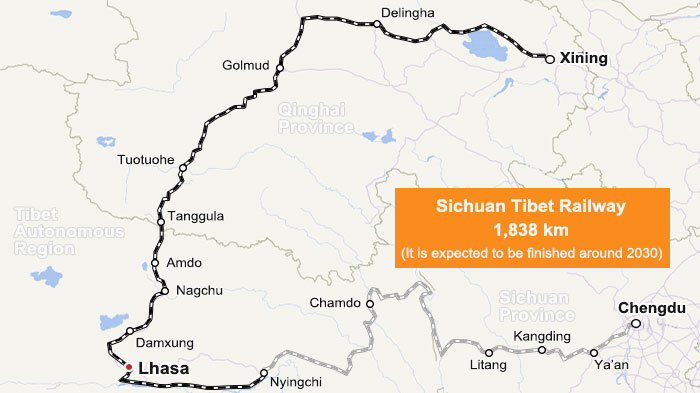 The Sichuan-Tibet Railway is currently under construction.

Benefit:
a. “Highly Time-efficient”---- When the construction of the railway is finished in 2030, it will be the most time efficient overland gateway to Tibet. It is estimated to take only 15 hours to travel from Chengdu to Lhasa.
b. “More Options for Travellers”--- During particular travel rush seasons in China (such as 10 days before and after Spring Festival, Summer& Winter Break for nationwide students), if you fail to book train tickets from Beijing or other places to Lhasa, you can choose to fly from Beijing/Shanghai/Guangzhou to Chengdu and take train to Lhasa.
c. “Spectacular View” --- Different from the gobi desert, vast qiangtang prairie, and majestic Tanggula Mountain, etc you enjoy on the Qinghai-Tibet Railway, the ride on Sichuan-Tibet Railway features idyllic scenery in Kangding, and Litang and stunning Mt. Namcha Barwa in Nyingchi, and historic Samye Monastery in shannan, and not to mention numerous attractions in Sichuan.

Train station: In the future, Sichuan-Tibet Railway will become travellers’ first choice to travel overland from other part of China to Tibet. The train will pass 38 stations and the entire railway route consists 3 major parts which are Chengdu-Kangding, Kangding- Nyingchi, Lhasa-Nyingchi.

Major Attraction:
Sichuan-Tibet Railway ascends from Sichuan Basin to Yunnan–Guizhou Plateau and finally reaches in Qinghai-Tibet Plateau. Travellers will be able to enjoy Min River, Jinsha River and Yarlung Tsangpo River and pass boundless grassland in Kangding and the idyllic scene in Nyingchi and witness the subtle change of topography and varied flora and fauna from basin to the world’ highest plateau. 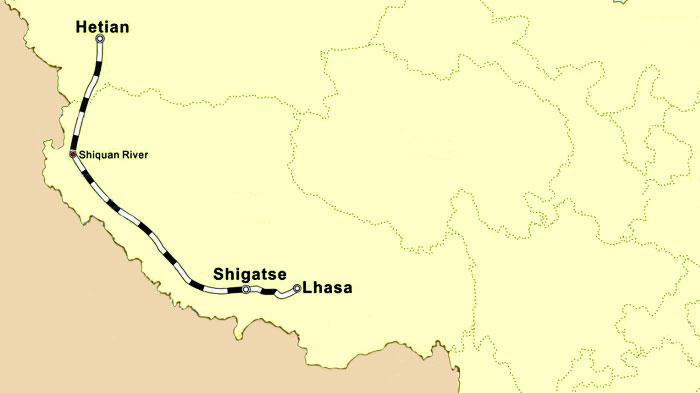 The construcation of this railway does not officially begin.

Drawback: For most Tibet inbound tourists, the railway route may be a large detour to Lhasa since the train starts from far west of China all the way to Lhasa.

Train station: As the construction of Xinjiang Tibet Railway does not officially begin, the exact number of train stations is currently not available.

Major Attraction:
As planned, the Xinjiang-Tibet Railway will start from Hotan, Xijiang province and climbs over Keriya Mountain Pass and travels southwards to Gerze County, Tibet Autonomous Region, then to Shiquan River, Ali prefecture, and later moves to Shigatse, and eventually ends up in Lhasa. The scenery along the train is second to none, and travelers will enjoy spectacular Qiangtang prairie, diverse wildlife, Guge kingdom, sacred Mt. Kailash, etc.

Given the quickest and easiest train journey to Lhasa, so far the best option is to choose Xining-Lhasa railway.

For further consultation, please free feel to contact us.