International experts simply stated that the Qinghai-Tibet Railway could not be built when China announced the plan of building the track on the Tibetan plateau. With its extremely harsh climate and geographic conditions, it was no doubt, an arduous task.

Both economic and geographic difficulties were encountered in the construction of this most elevated railroad. As is well known, such a feat of engineering must require huge investment, which was a big challenge for China at the time. But, the biggest challenges lay in the harsh geographic conditions on the high plateau. The fragile ecosystem on the Qinghai-Tibet Plateau, and also the lack of oxygen at the high-altitude, and the permafrost were major problems which made the history of the Qinghai-Tibet Railway specifically eventful.

1. Solution to lack of oxygen About 85 percent of the Qinghai-Tibet Railway was built over 4,000 meters, which means that the oxygen level along the railway is only 50-60 percent of that at sea level and that the annual average temperature is below freezing point. It is a big threat for travelers with light luggage, let alone for the construction workers, who had to do heavy labour when carrying out the project.

To ensure the health of the builders, a medical insurance system was put in place. A total of 115 medical facilities were set up along the railway, staffed with more than 600 medical professionals. 17 oxygen-making stations were constructed. There was one clinic every 10 kilometers along the line, allowing sick workers access to rapid and effective medical treatment, as well as regular health checks. Sometimes, the workers had to shoulder oxygen bottles to get to work. They also enjoyed regular breaks from work to rest in low-altitude areas. With these efforts and facilities, none of the workers died of altitude sickness during the construction.

All the trains used on the railway were also provided with oxygen supply system to prevent passengers from lack of oxygen.

2. Protection of the fragile ecological environment 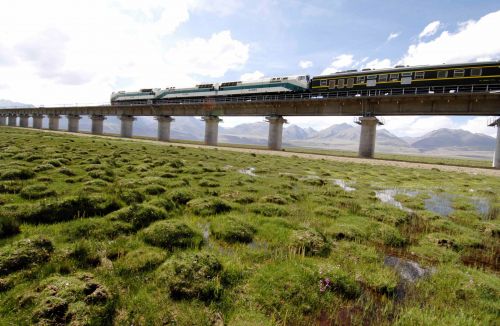 The Qinghai-Tibetan Plateau with its primeval, peculiar and fragile ecosystem is home to many rare animals and plants, and the source of many rivers. Protection of the ecological environment was an essential concern in the design of the Qinghai-Tibet Railway. Some RMB1.54 billion was invested in the project, for environmental protection.

•All waste water from construction and camp sites was processed to meet the corresponding sewage treatment standard before discharge. Solid waste from construction sites and trash from the campsites was sorted out and recycled whenever possible. Waste that could not be degraded was moved to appropriate places for batch treatment.

•The route was selected to keep away from the major habitats of wild animals as much as possible. For example, the original route was abandoned because it passed through the reserves of black-necked cranes. If avoidance was impossible, such as the section cutting through the Hohxil, Qumar and Soga nature reserves, measures were taken to minimize disturbance to endangered animals like the Tibetan antelope and wild ass.

•In order to avoid disturbance to the Tibetan antelope mating season each June and July, the builders stopped work for a period, withdrew equipment from the construction site, and also removed the colored flags, which would alert and frighten the Tibetan antelope.

•Construction sites were selected and designed to ensure that vegetation was not destroyed. To prevent damage to permafrost, wetlands and grasslands, 675 bridges with a total length of about 160km were built between Golmud and Lhasa. It is around one seventh of this section.

•To minimize the loss of ground vegetation, grass seeds suitable for plateau areas were carefully selected and planted with appropriate means of cultivation. In places difficult for plants to grow, the turf was preserved and replanted in other places, section by section, to be moved back to cover the slopes of the roadbeds and construction sites.

•All the units involved in building this railway took measures to minimize the pollution during construction. To achieve this goal, high-efficiency, low-noise and low-pollution equipment were used.

•Since the operation of the Qinghai-Tibet Railway in 2006, all the stations use environment-friendly energy sources such as electricity, solar energy and wind energy for heating. Garbage at the stations is collected for batch treatment. Domestic sewage, after being treated to meet the State's discharge standard, is used, whenever possible, to water green spaces.

•All the train cars were installed with environment-friendly toilets, wastewater deposit tanks, and garbage treatment facilities to protect the environment along the railroad.

Adverse impact of the railway construction on the ecological environment was kept to a minimum. Investigations by SEPA, and other authorities, show that frozen soil, vegetation, wetlands, and the water quality in rivers along the railway, have been effectively protected and the plateau ecosystem was not markedly affected. 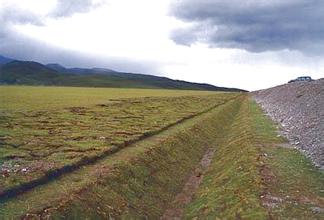 Around 550km of the railway had to pass through the places with permafrost, which features soft and wet soil in summer, and hard and stretching soil in winter. It troubled engineers over the world, but the Chinese successfully figured out ways to solve the problem, and ensure roadbed stability in permafrost regions by gravelling embankments and vent-pipe roadbed techniques.

Permafrost areas were avoided as possible, by building bridges instead of railroad. Building a bridge over the permafrost, though expensive, has the least impact on the area. The 11.7km Qingshuihe Bridge is the world-longest bridge built on permafrost.

The most important solution to permafrost are stone embankments - a layer of loosely piled chunks of granite about the size of baseballs, that allow enough space between the rocks for air to circulate freely.

In some places, the engineers buried ventilation pipes in the ground. The pipes simply allow the cold air to circulate underneath the rail-bed. In other spots, though, a pipe called a thermosiphon was sunk 5 meters (15 feet) into the ground and filled at the bottom with ammonia.

In addition, a monitoring system has been established to check the temperature change along the railroad.

0 Comment ON " Why is the Qinghai-Tibet Railway an Engineering Miracle?"