Top 10 Things to Do in Kathmandu, Nepal

Lying in the heartland of the Himalayas, Nepal is one of the world’s top destinations for adventure sports, trekking, and mountain climbing. With the high Himalayas spanning its entire northern border, Nepal has a wealth of trekking trails for everyone from the basic beginner to the most experienced trekker. Nepal is also the more popular side of Mount Everest when it comes to climbing the mountain, as many people want to follow the footsteps of Hillary to scale the world’s highest peak. When it comes to adventure sports, few countries can match Nepal for variety, with everything from white water rafting and kayaking to mountain biking and bungee jumping.

This unique country has a hugely varied geography, ranging from sub-tropical forests and jungles, through the plains and lower valleys of the Terai Region, to the foothills and mountains of the mighty Himalayas. With a wide variety of weather patterns, depending on where and how high you are in the country, it is one of the few countries in Asia that can be visited easily throughout the year. A predominantly Hindu country, the major religion accounts for more than 90 percent of the population, with a small percentage of them being Buddhist. Heavily influenced by India, the unique religions of Nepal incorporate aspects of both Hinduism and Buddhism in their rituals and ceremonies.

With such a huge variety of activities available, and such a unique and diverse set of cultures, there are more things to do in a Nepal tour. Instead, we have listed here the top ten activities to do in Nepal based on customer experience.

1. Visit Religious Sites in Kathmandu Valley and Its Surroundings

Nepal is a home to two of the largest religions in the world, Hinduism and Buddhism. A melting pot of the great cultures of India and China, the country is deeply religious, with temples spread across the landscape that date back over two thousand years. Pashupatinath Temple, lying on the banks of the Bagmati River, is one of the most important Hindu temples in Nepal, and is the holiest pilgrimage destination in the country. Another major Hindu Temple is Budhanilkantha, located in the foothills of the Shivapuri Hills. Known for the fascinating statue of the reclining Lord Vishnu, laid on a bed of coiled snakes, this statue carved from a single block of stone actually floats on the water. 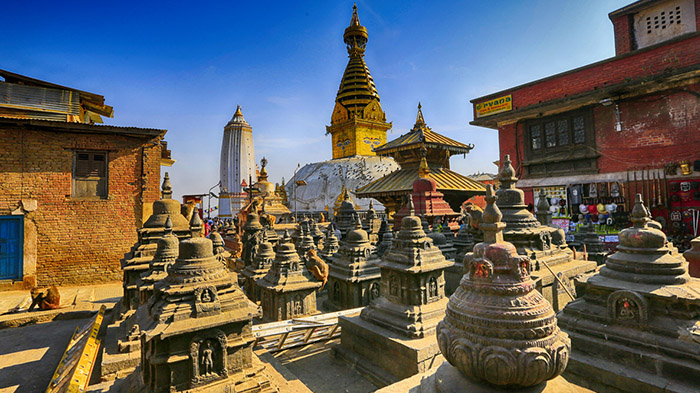 The Famous Bouddhanath Stupa and Surrounding Temples in kathmandu, Nepal

Buddhists are not ignored in the Nepalese temples in Kathmandu either. Swayambhunath Temple is a complex of stupas and holy Buddhist shrines that is also known as the Monkey Temple for the hordes of macaques that live there throughout the year. The giant stupa is topped with a golden spire above the four pairs of Eyes of the Buddha, painted on all four sides to symbolize the all-seeing eyes of Buddha. Bouddhanath Stupa is another important site for Buddhists in Nepal, and is located on the eastern outskirts of the city. Considered to be the most sacred Buddhist stupa outside Tibet, it was built in the 14th century and is an important site for Tibetan Buddhists living in Nepal. Sitting proud on a three-tiered mandala platform, it is the cleanest Buddhist site in the valley.

The most commercial neighborhood in Kathmandu, Thamel is well known for its shops and stalls. A haven for western tourists visiting Nepal, this beautiful district of Kathmandu is just a short walk from almost anywhere in the city, and just a 20-minute drive from the airport, as long as the traffic is not too bad. Thamel is one of the most popular places for international tourists t stay, and is filled with shops, hotels, cafes, coffee shops, and restaurants, and it is the only place in Kathmandu where you can get Nepali and Western food in one place. 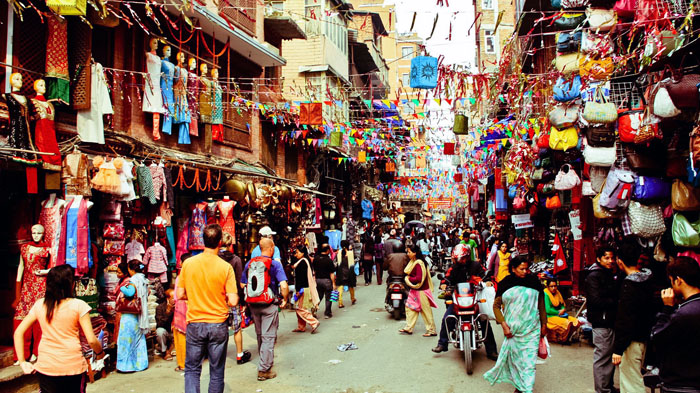 One of the most attractive places for visitors to the city, Thamel is the place where you can find just about anything you need, from trekking supplies and climbing equipment, to Buddhist bells and prayer wheels and the impressive kukri knives of the famous Gurkhas, the British military regiment gleaned from the mountain tribes of Nepal. With hundreds of places to eat, the general rule of thumb in Thamel is that, if it is busy, it is most likely safe to eat there. But do not count out the smaller establishments, as more often than not, they are as yet just undiscovered. Thamel is also stunning at night, and is the largest entertainment district in Nepal, with plenty of clubs and bars to choose from.

3. Mountain Bike from Kathmandu to Dhulikhel

If you are a fan of mountain biking along the mountain trails, then there is no better run than the biking route from Kathmandu to Dhulikhel. This awesome yet peaceful mountain bike trail begins with the exotic Kathmandu streets before heading out into the wilds to take on the bumpy and rough trails towards Dhulikhel, 32 kilometers to the east of the city. Passing through such famous places as Bhaktapur and Patan, this unique biking route offers some of the best Himalayan views in Nepal, from the Annapurna Range to Mount Everest. You can stop at any of the interesting sites along the way, of which there are plenty, including the Buddhist stupa of Namabuddha and the tranquil Panauti Temples. 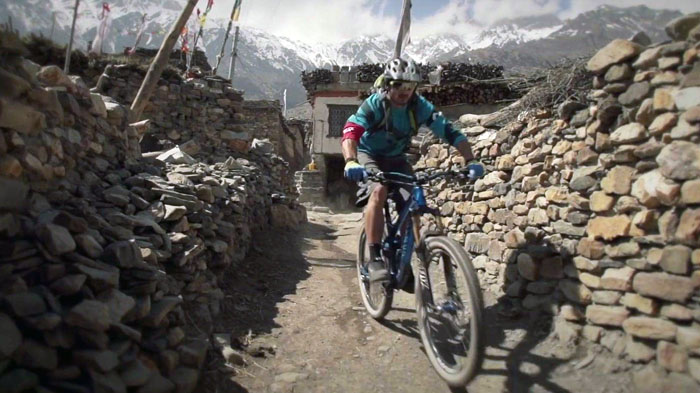 4. Do Treks in Pokhara

The second largest city in Nepal after Kathmandu, Pokhara is well known for being one of the best places to start trekking. Lying just 200 kilometers to the west of the capital, it is easily accessible and is one of the main gateways to trekking in the country. From day-long hikes to longer treks that can last for as much as three weeks, Pokhara has them all, catering for all levels from beginner to the most experienced. With brilliant mountain views of Annapurna I, Manaslu, Dhaulagiri, and many more mountains, a Pokhara trekking tour is considered to be some of the best trails in the world. 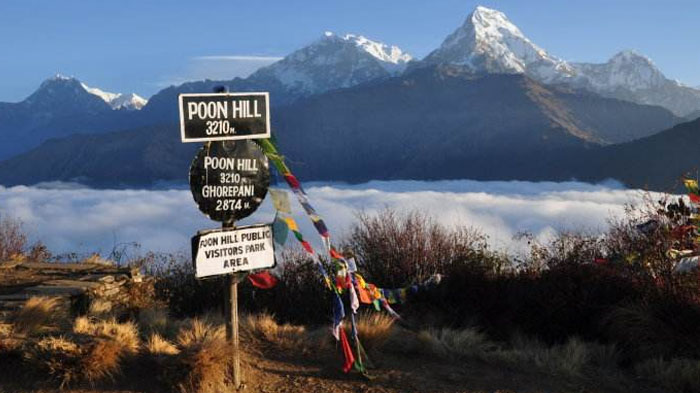 Poon Hill Trekking in Pokhara is one of the most popular trekking routes in Nepal.

Not far from the city of Pokhara lies Sarangkot, one of the top paragliding sites in Nepal. For the adventure seekers, there is no better place to try this amazing sport, and you can experience the thrill of gliding high over some of the best scenery on the planet. Paragliding is only done in the months from November through February, as the rest of the year is unsuitable. The best months to try paraglide are November and December, and Sarangkot is well known for being one of the most popular of the sites in Nepal. 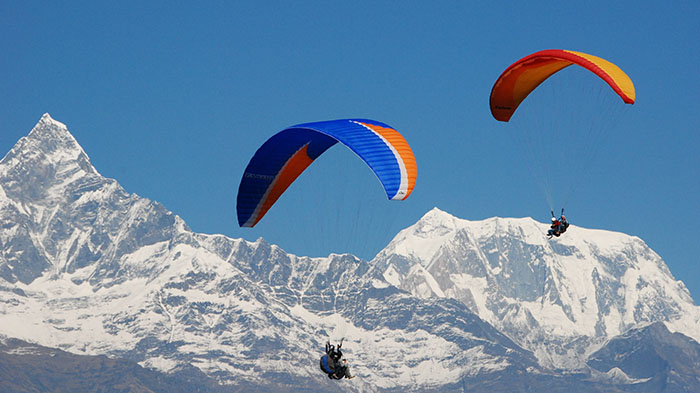 Sarangkot, a Best Place to Do Paraglide in Nepal

Lying in the southwest of Nepal, the Chitwan National Park is one of the largest in the country, and has the widest range of wild animals inside its boundaries. Safaris are a popular way to explore this vast park, and the guided safari vehicles will take you to the best places to see the wide variety of wild animals that live in the park. From the wild Indian elephants and the stunning one-horned rhino to the elusive leopards, silent crocodiles, and spectacular Bengal tigers. As one of the best places to see the Bengal tiger outside India, Chitwan is the ideal place to spend a weekend on safari. 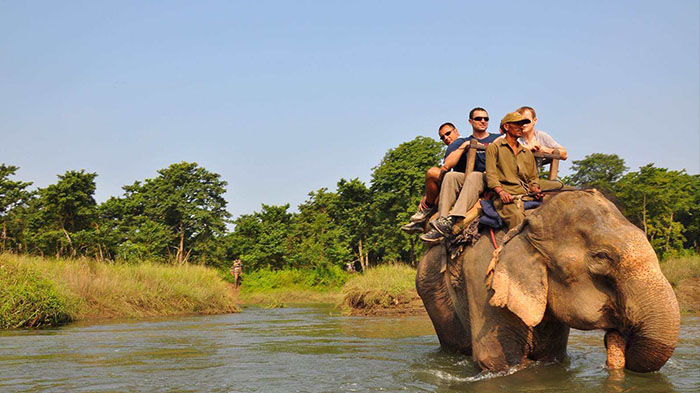 7. Explore the Lumbini, the Birthplace of the Buddha

Before he became the world-renowned Buddha, Siddhartha Gautama was a royal prince, born in Lumbini in western Nepal, in what is now the Rupandehi District. Born in around 563 BC to Queen Mayadevi, Gautama is believed to have achieved enlightenment more than thirty years later, after renouncing his royal birthright and leaving to seek enlightenment and the truth of the universe. Nowadays, Lumbini is one of the biggest pilgrimage sites in the world, and a magnet for Buddhists and Hindus alike as one of the pivotal locations of Buddha’s life. While the exact location of his birth is unsure, it is believed that the Mayadevi Temple, devoted to the mother of Buddha, was constructed on the site of their original home. 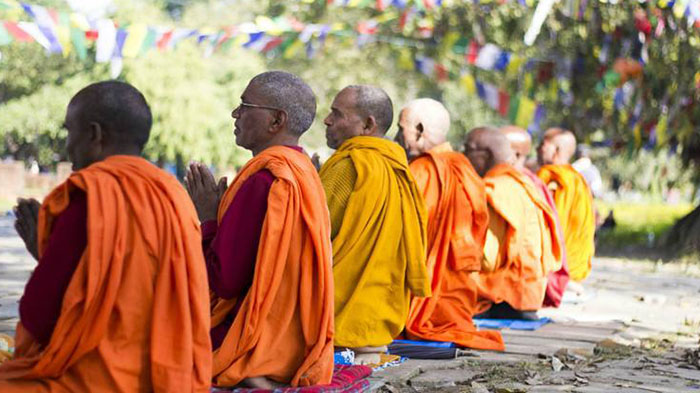 Monks in Lambini, the Birthplace of the Buddha

Travel out along the trail from Lukla that eventually leads to the base camp of Mount Everest, and you will come across the smallest capital on the planet. Sitting at an altitude of 3,500 meters above sea level, Namche Bazaar may look like a small Nepali village, but it is in fact the capital of the Sherpa people, the mountain tribe best known for providing guides to mountain climbers. The most famous Sherpa, Tenzing Norgay, was born and raised in Tengboche, a short distance along the trail, and was hired for the Everest expeditions from Namche Bazaar. The village was once the capital of the Khumbu region of Nepal, and was the central trading hub for the Sherpas from all the villages in the region, and still sells home-made yak cheese and butter. Aside from the museum at the visitor center, Namche is also the home of the last surviving member of the famous Hillary-Norgay summit expedition, Kancha Sherpa. 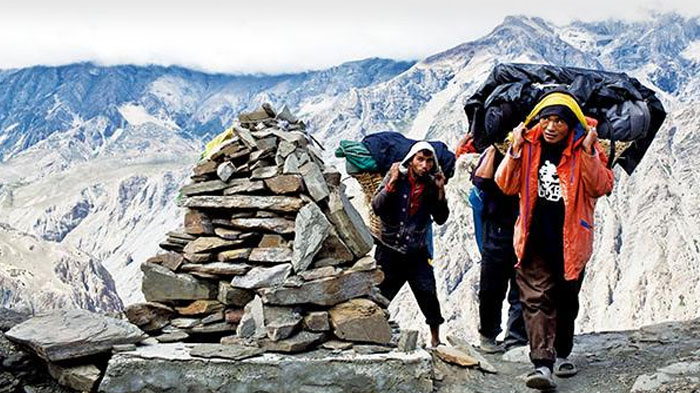 9. Trek from Lukla to EBC

If you made it as far as Namche Bazaar to see the Sherpa capital, then what is there to stop you from continuing on to the culmination of the trip to Lukla, Mount Everest base Camp, at 5,364 meters above sea level. From Lukla, the trek to Everest Base Camp in Nepal generally takes nine days to reach the camp, and three days to get back. One of the most popular treks in Nepal, this awesome adventure is the trek of a lifetime, and in the peak seasons the trail is filled with trekkers heading in both directions. While you cannot actually see the peak from the southern base camp in Nepal, there is a nearby ridge, known as Kala Patthar, from where you can get one of the best views of the massive mountain in the world. 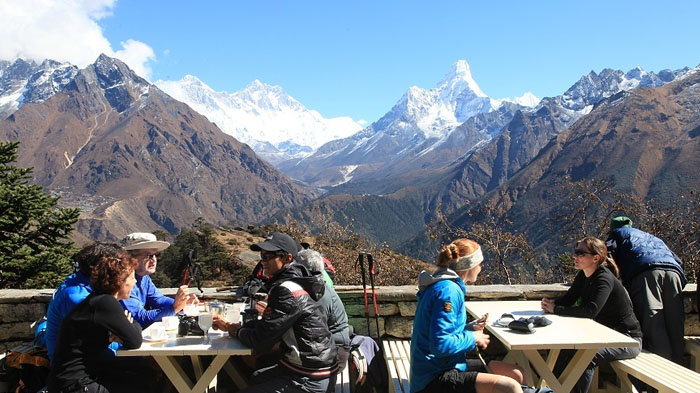 Also known as the Water Festival, the Holi Festival in Nepal is one of the most important dates in the Hindu calendar. The celebrations normally start on the full moon in the Nepali months of Fagu (mid-February to mid-March in the Gregorian calendar) and can last for as long as seven days. Celebrated as the overcoming of evil by the powers of good at the start of spring, the locals and tourists spend the event splashing each other with water and then throwing colored powders over everyone as a way to express their most sincere good wishes and blessings for the coming year. 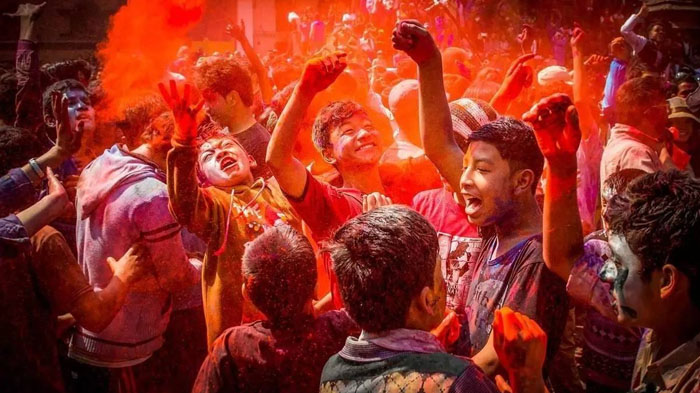 Experience the Holi Festival with the Locals in Nepal

0 Comment ON "Top 10 Things to Do in Kathmandu, Nepal"