How to Plan a Nepal Honeymoon Tour

With the idea of spending a honeymoon on some beach in the tropics doing nothing but sunbathing and swimming being considered passé these days, more and more honeymoon couples are opting for a more adventurous honeymoon. If you are this type, there is no better place in the world to spend your honeymoon than Nepal.

With spectacular mountain vistas, stunning treks, canoeing, white water rafting, paragliding, and wildlife safaris, there is a plethora of things to do on your honeymoon in Nepal.

Top Things to Do for a Nepal Honeymoon Tour

Nepal has a wide variety of activities, but they are not all in the same place. So the first thing to do is to work out what you want and where to go to get it in Nepal.

Kathmandu is the ideal place to see the best Nepalese culture, especially for those who just have a mini-moon. One week is enough to make your mini-moon memorable in Kathmandu.

Cultural highlights such as the Kathmandu Durbar Square, with its ancient royal palaces, or the stunning stupas at Swayambhunath and Boudhanath make for a beautiful experience.

You can book yourself a couple of mopeds and explore the Kathmandu streets and the surrounding area without the hassle of traffic, allowing you to go where you want.

Also, you can take a scenic flight from Kathmandu to view Mount Everest without the need to spend two weeks trekking. 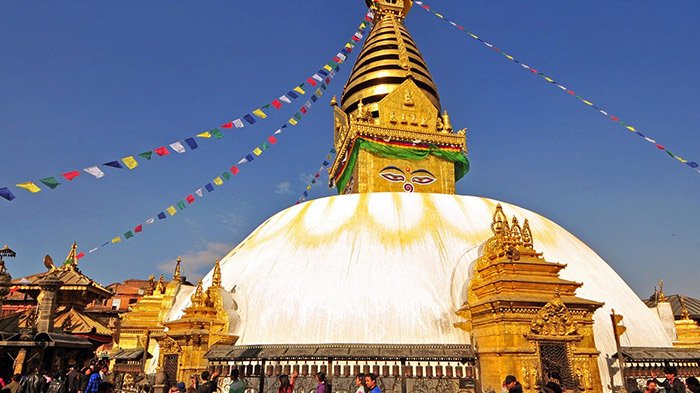 Trek in the Everest

Nepal is one of the best destinations for trekkers and mountain climbers around the world. The popular trekking routes in north Nepal include the popular Everest Base Camp trek in Nepal, the famous Ghorepani Roon Hill trek, the Annapurna Circuit trek, the Langtang Valley trek, the Manaslu circuit trek, and so on.

If you are a couple of this trekking type, you will not miss the trekking in Nepal during your Honeymoon.

Pokhara, the second-largest city in Nepal, is a great alternative to the busy Nepalese capital. With lots of romantic spots for honeymoon couples, as well as being a scenic and relaxing place, Pokhara is just a short 30-minute flight from Kathmandu.

In Pokhara, you can enjoy some relaxing yet delightful leisure activities, such as paddle boating on the Fewa Lake, or something more adventurous like paragliding at Sarangkot Hill. The stunning mountain peak of Machapuchare stands tall in the background of the lake, and from Srangkot Hill you can see the peaks of the Annapurna ranges.

For the active adventures, you can take some of the shorter hikes around Pokhara, which take you to Poon Hill and Khopra Danda, or the day-hikes such as the Panchase trek.

If you just want to do some sightseeing around Pokhara, there are many places to see, such as the Museum of Local History and Culture, or the Gorkha Memorial Museum. Alternatively, the city has lakeside yoga and spa centers, and you can get some pampering before exploring the spectacular restaurants that line the lake’s shores. 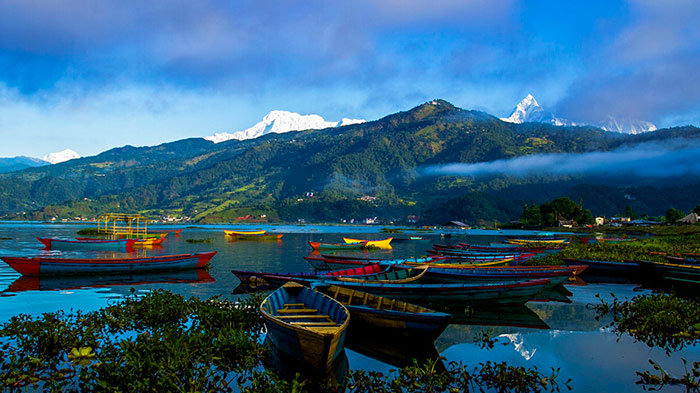 Set in the south of Nepal on the border with India is the Chitwan National Park, Nepal’s first nature preserve, and home to a huge number of rare and endangered species., such as the one-horned rhino, sloth bears, leopards, and the amazing Bengal tiger. Wild elephants roam the park, traveling in herds across the grasslands that are their natural home.

Listed as one of the best national parks in Asia, it is a great place to travel on an adventure safari to see the local wildlife, or trek through the jungle areas looking for elephants, leopards, and tigers. This UNESCO World Heritage Site, named in 1984, also has a variety of landscapes within its borders, from Himalayan foothills to the sub-tropical jungles and expansive grasslands of the Terai region. 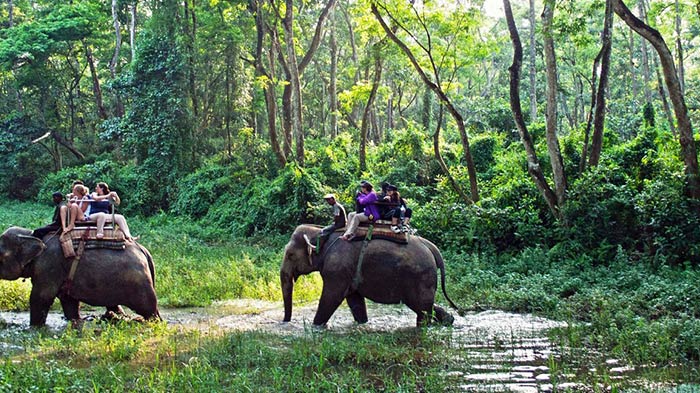 Lumbini is a unique place to the west of Kathmandu and is one of the holiest sites in Nepal. In around 563 BC, it was the birthplace of one of the most revered figures in Asia, Siddhartha Gautama, who was later known as the Gautama Buddha, the founder of Buddhism.

You can visit the actual location of the Buddha’s birthplace, which is now a unique temple dedicated to the mother of Buddha, the Maya Devi Temple. Built more than two thousand years ago, the Maya Devi Temple is actually a large white building that was built to cover and protect the identified site of the Buddha’s birth, on which several temples and stupas have been built over the centuries, including the ancient stupa erected by the Nepalese Emperor, Ashoka, in 249 BC. 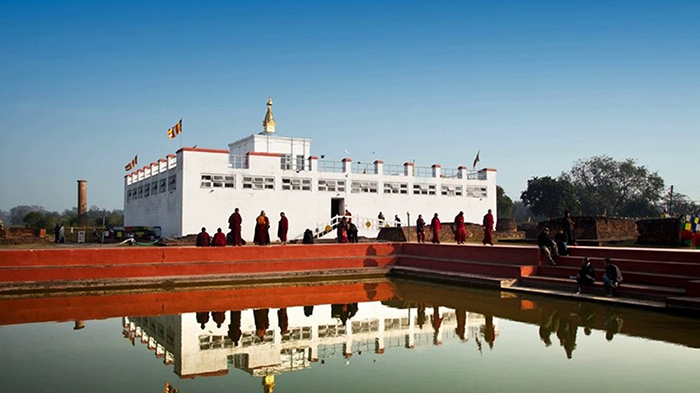 Choose the Best Time to Have a Nepal Honeymoon Tour

Nepal is a four-season country that is centered around the summer monsoon season. The climate in Nepal varies from the high mountain climate of the Himalayas to the lowland sub-tropical climate of the Terai region. There is no time when you cannot visit Nepal, and what you can do there depends on the season.

Spring in Nepal is from March to May. It is one of the best seasons to visit Nepal, as it is one of the prime trekking seasons in Nepal. Skies are clear and the high mountain snow has melted, leaving a bright, dry land that is perfect for hiking and climbing. In the lowland regions, it is a great time for wildlife safaris, and the weather is not yet too hot.

The summer season runs from June to August, when the monsoon rains come. The rains are more predominant in the lowland Terai, while in the mountains there are areas that see almost no rain at all. The land turns green and lush with new vegetation, and while it is not a great time to trek in some areas, in the area around the Kathmandu Valley the land comes to life, and it is a great time to explore this exotic city.

Autumn comes from September to November, and the skies clear once more, making treks in the Himalayas more popular. The lush vegetation is still in full bloom, and it makes for some great jungle safaris and other adventurous activities such as paragliding and canoeing.

Winter is the coldest season, but is not too cold in the lowlands and foothills for a great honeymoon. It is also the low season for tourism, so sightseeing is a less crowded activity. 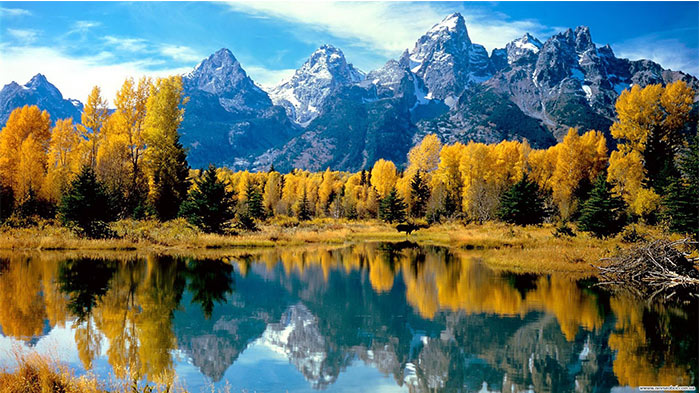 Now, plan your Nepal Honeymoon Tour with no worries

Once you decided where you want to go, you can organize the itinerary yourself or get in touch with a tour operator who can advise you on more details. With the local office in Kathmandu, our Nepal travel experts could help you better arrange your honeymoon trip in Nepal.

Last but not the least, you need a visa for Nepal, which can be arranged before you leave home or once you arrive in Nepal. Nepal tourist visa can be obtained from the Embassy of the Kingdom of Nepal, or the immigration desk on arrival at the airport.

Getting a Nepal visa is not difficult. You need to provide your passport with six months’ validity, a completed application form (which will be given to you on the plane), and two passport-sized photos.

Travel Tips for Honeymoon in Nepal during COVID-19
You need to provide the negative nucleic acid test 48 hours and received two doses of the COVID-19 vaccine so that you can get the visa of Nepal.

0 Comment ON "How to Plan a Nepal Honeymoon Tour"