Chinese Food in Nepal and Famous Chinese Restaurants in Kathmandu

While Nepali food is wholly unique, it bears its origins in the foods of Tibet, China, and India, which have had huge influences on the Nepali cuisine over the past few thousand years. The traditional Nepali cuisine has incorporated Tibetan and Indian cuisine into its own mainstream Nepali cultural cuisine that reflects the diversity of the Himalayas in almost every dish. Nepali food consists mainly of the staple ingredient found throughout Asia, rice, with the addition of wheat, corn, lentils, and plenty of fresh vegetables.

The basic meal in Nepal usually consists of dal, a lentil soup, bhat, which is steamed rice, and tarkari, the various vegetables used in Nepali cuisine. Known as the “Trinity”, these three main dishes are sometimes supplemented with meats, though the use of vegetables is more prevalent across the country, and vegetarians can find plenty of dishes to suit their tastes in Nepal. One of the most popular street foods, which can be found all across Nepal, is the momo, a steamed dumpling with meat or vegetables that is based on the Tibetan momo, a variation of the Chinese siomai. This has become so popular as a delicacy in Nepal that it has become one of the most eaten foods in the Himalayan kingdom. 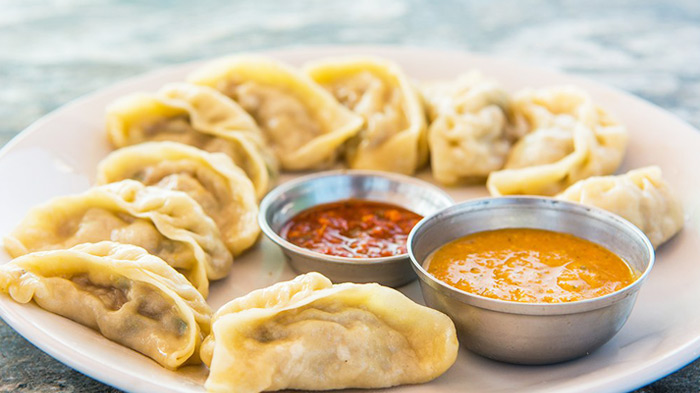 Nepal Momo is a kind of snacks in Nepal which looks like Chinese dumpling.

Nepali cuisine is also spicy, with a wide variety of herbs and spices, which have been introduced to the country from India and China. One of the most used is Timur, the Szechwan pepper that is used in many dishes, as well as marinades and achars. Many of the spices that are consumed in Nepal are grown in Tibet, and in the mountain regions, the cuisine has a heavier Tibetan influence, due to the inability to grow rice in the high-altitude areas of the Himalayas.

What kind of Chinese food is available in Nepal?

As the closest part of China to Nepal, Tibetan food is predominant in many of the mountainous areas of Nepal, with a big emphasis on dishes that are not made of rice. Mutton, yak, and goat are the main meats eaten in the main parts of Nepal that eat meat, though much of the country considers the yak to be a cow and do not eat their sacred animals. Yogurt is another of the Tibetan favorites that have straddled the mountains, and is eaten almost as much as it is in Tibet, though it is also taken as a drink known as lassi, similar to the Indian version of the milky yogurt drink. 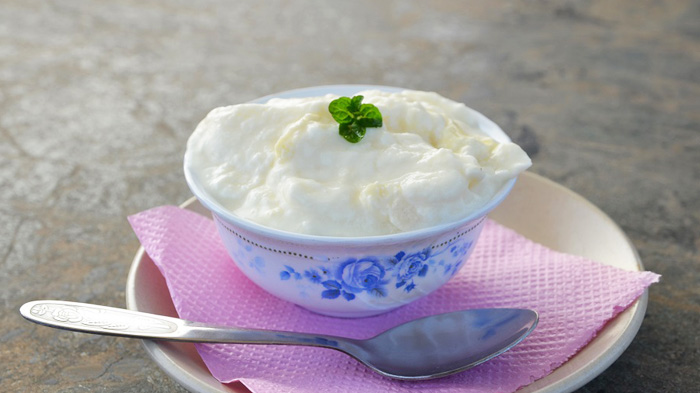 Yogurt is one of the most popular beverages in Nepal.

For mainland Chinese cuisines in Nepal, Szechwan or Szechuan cuisine is the most predominant, and can be found all across the country, anywhere that says they serve "Chinese" dishes. Originating in the Sichuan Province of southwestern China, the cuisine has become popular in Nepal for its use of noodles and spicy chili peppers, as well as the heavy use of garlic in almost every dish. Majority of the Szechwan dishes found in the areas of Nepal outside Kathmandu tend to be of the Buddhist and vegetarian sub-styles of the Szechwan cuisine, with the meatier Chengdu and Zigong sub-styles being more prevalent inside the Kathmandu Valley, where tourists gather in larger numbers.

Most famous Chinese restaurants in Kathmandu

Kathmandu is famous for being one of the most exotic cities in the world, and it certainly lives up to that reputation when it comes to food. The city is a hotbed of gastronomic delights, and for those that love Chinese cuisine, you are never far from a good Chinese restaurant, no matter where you are in the city. Some of the best Chinese restaurants in this part of Asia can be found in Kathmandu, from the simplest Chinese street cart to the most sophisticated high-class restaurants.

Close to the Radisson Hotel, this delightful Chinese restaurant specializes in making sure that the cuisine is totally Chinese, without the hint of Indian that sometimes comes with Chinese dishes in Nepal. Their specialty is fish and barbecue dishes, with traditional Chinese sauces, steamed rice, and the ever-present momos. Located at the top of the building, the restaurant has seats and tables on the rooftop, which gives you a great view of the city and the distant Himalayas. Well worth trying out.

If you are looking for authentic Chinese food in Nepal, then you cannot go far wrong in the Tian Rui Restaurant. Where many restaurants that say "Chinese Food" are limited to the generic options of fried rice and chow mein, the Tian Rui knows how to serve the most complex of Szechwan dishes in perfect harmony. The menu offers a wide range of both meat and vegetarian dishes, with just the right amount of Szechuan Pepper and spices. Set over two floors, the restaurant is spacious and has private rooms for family gatherings. The walls are decorated in traditional (outside China) Chinese decorations, such as red paper lanterns, Chinese script posters, and a delightful set of wall hangings that contain the menu, in Chinese. Service is fast and efficient, and the Jasmine Tea is the perfect accompaniment to the meal.

Located inside the Kubeyra Mahal Hotel in Thamel District, the Changcheng Chinese Restaurant is one of the premier locations for authentic Chinese cuisine in the area. The restaurant has its own bar and waiting area, with comfortable lounge chairs, and the restaurant is located on the rooftop, overlooking the city with great views of the Hanuman Dhoka and the Kathmandu Durbar Square. Serving mostly Szechwan cuisine, the restaurant is open to the public for both lunch and dinner.

One of the best authentic Chinese restaurants in Thamel, the Zhonghua Restaurant serves mouthwatering Szechwan and Cantonese cuisine at its convenient location in the center of Thamel, the tourist district of Kathmandu. Part of the Zhonghua Hotel, the restaurant is clean and comfortable, with a classic Chinese décor and tranquil atmosphere.

Established in Thamel since 2009, this classic Chinese restaurant is one of the most delightful small restaurants in Kathmandu, and its contemporary Chinese chic and fine-dining cuisine makes for a different view of Szechwan and Cantonese cuisine than you will get anywhere else. Decorated as if you were in one of the classiest of New York’s Chinese restaurants from the “ Roaring 20s”, you can choose to eat inside, in the stunningly-lit dining room, or outside on the street-side terrace, which has as much of the classic atmosphere as the inside.

Some information about Nepal food

While it may have been influenced heavily by both Chinese and Indian cuisine, there is no doubt that Nepali cuisine is in a world of its own now. The cuisine has also been heavily influenced by the diverse geography and topography of the region at the foot of the Himalayas, and the various styles of traditional Nepali cuisine reflect the areas from which they originate. The mountain areas were more influenced by Tibet than India, and as such the cuisine is closer to Tibetan, with that typical Nepalese twist of spicy chilis and chutneys that tantalize the taste buds.

The typical Newari cuisine of the Kathmandu Valley is one of the most unique foods of the Himalayas, where most of the dishes are cooked over a slow flame, and require plenty of time and patience in their preparation and cooking. Other Newari dishes can actually take a couple of days to prepare the food, allowing the meats - usually, yak meat - to marinade properly to make some of the most mouth-watering dishes in Nepal. 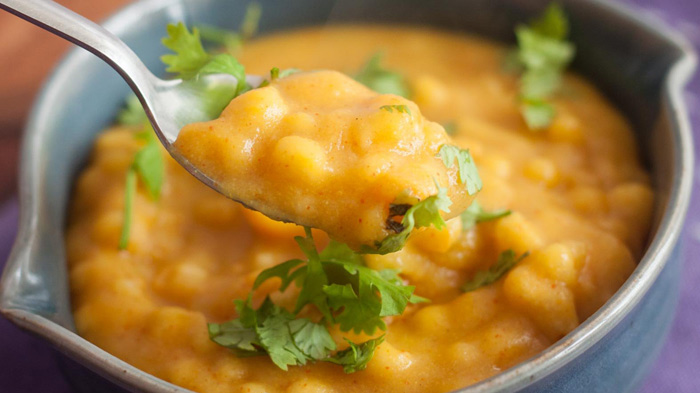 Pahari cuisine is one of the largest cuisines in Nepal.

Pahari cuisine, which originates from the Himalayan regions of Himal Pradesh and Uttarakhand, is one of the largest of the cuisines that are wholly native to Nepal. Cooked by more than 20 million people, the largest ethnic group in Nepal making up three-fifths of the population, Pahari cuisine makes heavy use of mandarin oranges, lemons, Asian pears, bayberries, mangos, and kaffir limes. Used to flavor the fish, chicken, and yak meat that makes up a large number of Pahari dishes, the ingredients are unusual, and the mangos are actually grown in Nepal, at a height of around 800 meters above sea level. Green and sour, they give the dishes a very distinctive flavor.

The Himalayan cuisine of Nepal is usually found at heights above four thousand meters, and is similar in taste and form to Tibetan cuisine, using highland barley as one of the main ingredients, with seasonal vegetables to make stews and curries. Yak meat, yak butter, and yak milk are the three things that you will find in almost every dish, in huge quantities, which helps to keep out the cold in the harsh Himalayan winters. Butter tea has also made the trek across the mountains to this area of Nepal, and is drunk as much with the Himalayan cuisine dishes as it is in Tibet.

Nepal is a country with a wide variety of dishes from a vast variety of cuisines, many of which have been influential in the creation of other cuisines within the country. Szechwan cuisine is the most prevalent of the different styles of Chinese dishes in Nepal, and has even been fused with Indian cuisine in some places, making a unique dish that has elements of Indian, Chinese, and local Nepali cuisine in it. If you are traveling to Kathmandu, you have a unique opportunity to try some of the delicious and exotic foods in the Nepali capital, from the classiest of restaurants in Thamel to the unsanitary-looking street carts, selling some of the most unusual, but tastiest snacks in Asia.