How Many Days Are Usually Taken for a Pleasant Nepal Bhutan and Tibet Trip?

A tour to any of the Himalayan countries is an experience one would never forget, with the high mountains, crystal clear lakes, and numerous temples and monasteries. What more if you could take a trip that could cover three Himalayan regions in one. Touring through Bhutan, Nepal, and Tibet all together is an experience that should not be missed, and which offers the best from all three regions.

Take the train to Tibet, and travel overland across the region, exploring the unique religion and culture of the Tibetan people, as you visit monasteries, lakes, mountains, prairies, and the stunning Mt. Everest. Stop off at Lake Yamdrok, and tour the ancient home of the second highest spiritual leader in Tibet, the Panchen Lama, at Tashi Lhunpo Monastery. Then stay in the highest monastery in the world at the remote Rongbuk monastery, with its spectacular morning views of the sun on the peak of Everest.

Then cross the border into Nepal, and experience the exciting and spectacular city of Kathmandu, the capital of Nepal, before heading out of the city to visit the temples of Pashupatinath and Boudhanath, and the amazing national park at Chitwan, with its rhinos, crocodiles, and the endangered Bengal tiger.

And, finally, take a flight over the Indian state of Sikkim, to the ancient and mysterious Kingdom of Bhutan, where you can climb up to Paro Taktsang, the famous “Tiger’s Nest” Monastery, where Padmasambhava is reputed to have meditated for three years, three months, three weeks, three days, and three hours more than 1,400 years ago. Take a trip to the 17th century Gangteng Monastery, and the ornate Buddhist fortress of Rinpung Dzong, then come down from the hills to take in the rare species of wildlife in the Manas National Park, where you can interact with the working elephants.

Tibet is a land that sits on the highest plateau in the world, filled with monasteries, lakes, mountains, prairies, and the unique Tibetan people. The culture of Tibet is closely intertwined with its Buddhist beliefs, and the Tibetan people live their lives in devout honor of their ancient religion. A tour in Tibet can take anything from 5 to 21 days, depending on what you want to see while you are there. Since all tours are required to be organized by a registered tour operator, complete with guide and private vehicle, an individual tour is expensive, so many people choose to join Tibet group tours, where other like-minded people travel with them on a tour across this mystical region.

At least two days is needed to tour around Lhasa, since a little time is required to properly acclimatize yourself to the high altitudes after the long train journey to Tibet. The main sights in Lhasa that you would want to visit are the beautiful Potala Palace, the winter palace of the Dalai Lama, and previous center of the old Tibetan government, as well as the world-famous Jokhang Temple, the ancient spiritual center of Tibetan Buddhism, and the most sacred temple in Tibet. Outside the temple is the famed Barkhor Street, the kora route for pilgrims to Jokhang and the most spectacular place to buy authentic Tibetan gifts for your loved ones. 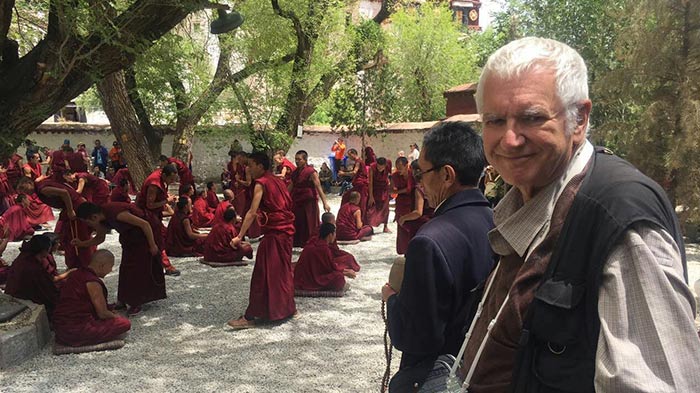 Tourists are watching the extravagant monastic debates in Sera Monastery

The second day of acclimatizing can be used by taking a trip to the monasteries of Sera and Drepung. Sera Monastery is one of the “Great Three” monasteries of the Gelugpa sect of Tibetan Buddhism, and is renowned for the extravagant monastic debates that are held every afternoon in the grounds. Drepung Monastery, set at the foot of Mount Gambo Utse, is another of the “Great Three” monasteries, and is the most important monastery of the sect, as well as the largest Gelug monastery in Tibet.

After touring Lhasa, it is then off out into the wilderlands of Tibet, on a trip to the next stop en-route to Nepal, Shigatse. Here you can visit the stunning Tashi Lhunpo Monastery, the home of the Panchen Lama, with its massive stupa. On the way to Shigatse, you get to stop and see some of the beautiful sights of the region, such as Karola Glacier, Manak Dam Lake, Yamdrok Tso, as well as crossing two high mountain passes.

No tour in Tibet would be complete without a trip to Everest, the pinnacle of the Himalaya Mountain Range. The road takes you right up to the Base Camp, where you can view the stupendous mountain, and take photos from the closest point where tourists are allowed. After staying the night in the tent hostels at the base camp, it is off to Gyirong to prepare for the trip across the border into Nepal.

How long you stay in Nepal depends mainly on what you want to do there. Since most trekking tours start at around 14-16 days long, they would not be best for a combined trip to Nepal, Tibet, and Bhutan. However, there are plenty of other things to do in Nepal, with its capital, Kathmandu, being one of the most exotic cities in Asia. A tour of the city can take around 2-3 days to complete properly, and see everything, but the top sights can normally be seen in a day. It is best not to try to pack in too much in a short time, since you would likely miss the best parts of the individual sites by rushing around them. 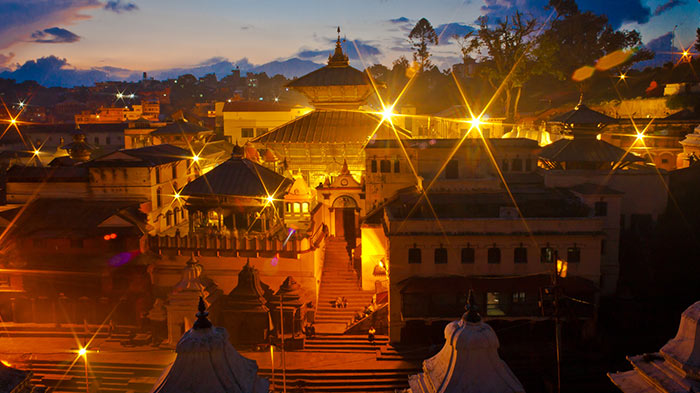 The brightly-lit Pashupatinath is definitely worth visiting

A single day is enough to take in the famous sites of Pashupatinath, where the Hindu dead are cremated out in the open on the riverbank, and the exotic, Tibetan Buddhist community of Boudhanath. The stunningly preserved micro-city of Bhaktapur offers a taste of what Kathmandu was like before the modern world arrived, and the old-world bazaar town of Bandipur, poised on a precipitous ridge, is packed with gorgeous boutique hotels and friendly homestay lodges.

Another day can be used to visit the beautiful, lakeside city of Pokhara, which sits under the glistening white peaks of the Annapurna range, where you can paraglide, meditate, or just relax on a boat or by the lake. From Pokhara, head off next to the jungle, grassland and rivers of Chitwan National Park. You’re almost guaranteed sightings of rhinos, deer, monkeys, crocodiles and countless species of birds. You might not spot the elusive tigers, but you can ride on an elephant.

After touring Nepal, it is time to take a flight across two borders to the mysterious and ancient Kingdom of Bhutan. On arrival in the Bhutanese capital of Thimphu, you will check in and then you can head for some of the local sights in the area, such as the Takin Sanctuary, which cares for the rare Himalayan goat-antelope which was once found all over the mountains, as well as the Buddha Dordenma Statue, and meet the nuns at Zilukha Nunnery. The famous Thimphu Dzong, the largest religious building in Thimphu.

Then it is off to Punakha, for a tour of the beautiful architecture of the Punakha Dzong and the Chimmi Lhakhang, a temple dedicated to the Devine Madman and a sacred place where people pray for children. Alternatively, you can visit other beautiful sites in the area around Punakha, such as the Gangtey Valley, a vast, U-shaped glacial valley, which is the home to the graceful Black-necked Cranes, which visit the valley from Tibet during the winter season to roost. You could also take in the Gangtey Monastery, the only Nyingmapa monastery to the west of the Black Mountains, and the biggest Nyingmapa monastery in Bhutan and the famous dzong at Wangdue Phodrang. 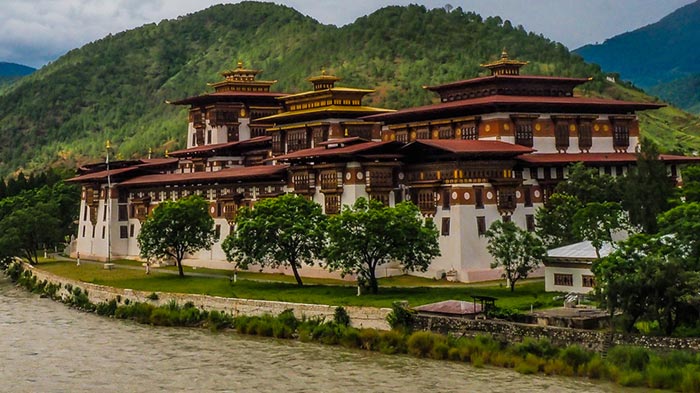 After Punakha, you will travel to Paro, where you can spend the afternoon touring the Paro Dzong, the local religious administrative center, and the ancient watchtower of Ta Dzong, which now houses the National Museum, and is filled with ancient Bhutanese cultural and religious relics. Also, you cannot visit Bhutan without paying a visit to the famous Taktsang Monastery, which is also known as the Tiger’s Nest Monastery. The monastery sits on a ledge in the cliff high above Paro, where the second Buddha spent years meditating after landing on the cliff ledge. it is believed that he flew from Tibet to Bhutan in the 7th century on the back of a flying tiger, which had been his former Tibetan concubine, and landed on the cliff to meditate, before slaying the local demons and converting the Bhutanese to Buddhism. You can also see the ruins of the Drukgyal Dzong, built to commemorate Bhutan’s victory over the Tibetan invaders.

With all of these things to do, it is little wonder that a tour of all three regions of the Himalayas would require a long holiday. In order to see the most important sights of all three places, at least 17 days is required for the tour. It is possible to cut out some of the out-of-the-way sites, such as Everest if you are not a big mountain fan, and the visits to Chitwan or Pokhara. This would make the tour a little shorter, and you would not be missing the main features of each country. It is also possible to just spend 4 days in Lhasa, touring the city and the monasteries, and then flying to Kathmandu instead of going overland. On average, the optimum number of days needed to take a pleasant tour of Nepal, Bhutan, and Tibet is anywhere from thirteen to seventeen days.

0 Comment ON "How Many Days Are Usually Taken for a Pleasant Nepal Bhutan and Tibet Trip?"