When Is the Best Time to Tour Nepal Bhutan and Tibet All Together?

A trip to Bhutan, Nepal, and Tibet is an exotic journey that explores the ancient cultural gems of the Himalayan region. It is the trip of a lifetime, and popular with culture and nature lovers alike. From the rituals of Mahayana Buddhism to the lesser-known cultural traditions of Bhutan, Tibet and Nepal, a Himalayan tour gives you the chance to understand what it means to live within the shadow of the greatest mountains on earth.

The unique art and architecture that is featured throughout the Himalayas is often just as significant to local people as religion and royalty, with visits to decorative palaces and places of worship adding to the intoxicating whirlwind of sightseeing in Kathmandu, Lhasa and Pokhara. A tour of all three regions incorporates the very best of the landscapes and cultural diversity, with the snow-capped peaks of Nepal just as enticing as the remote mountain monasteries and the fascinating local customs that you'll find in Bhutan and Tibet. 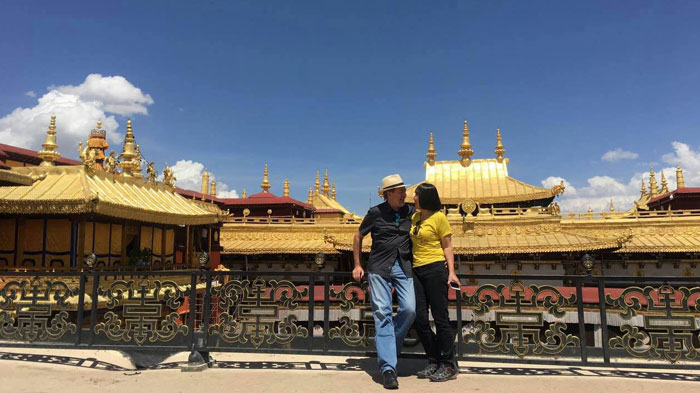 A Bhutan, Nepal and Tibet tour covers the three most beautiful Himalayan nations of South Asia: through the last Shangri-La of Bhutan; the land of the birthplace of Buddha, Nepal; and the roof of the world, Tibet. Many tours start with visits to popular Bhutanese landmarks like the Tiger’s Nest Monastery, the King’s Memorial Chorten, the fortress of Punakha Dzong, and others. Next, travel to Nepal, with a flight to Kathmandu for an amazing time. Begin your tour with visits to three UNESCO World Heritage Sites in Kathmandu followed by jungle safari in Chitwan or sightseeing in the amazing lake city of Pokhara. Then fly or travel overland from Nepal to Tibet and visit popular Tibetan landmarks such as the Potala Palace and Norbulingka, the Tibet Traditional Museum, Barkhor Bazaar and other places in Lhasa. While there, you can also visit a number of impressive Tibetan monasteries like Sera, Drepung and Jokhang Temple. Travel a little farther away from Lhasa to explore the amazing Ganden Monastery and Milarepa’s Cave.

Unlike most places in the world, there really is no “best time” to tour Nepal. The right time to visit, however, depends largely on what you are looking for in the trip. Whether it is mountain climbing, trekking, sightseeing, or adventures in the jungles, there is a right time for all of it. And often, these can be combined at certain times of the year to incorporate all of the things you want to do.

Nepal has a sub-tropical climate with four seasons; spring (March to May), summer (June to August), Autumn (September to November), and winter (December to February). However, the higher mountainous regions of the country have a more alpine climate, with heavy snow in the depths of winter, and freezing temperatures for most of the year. 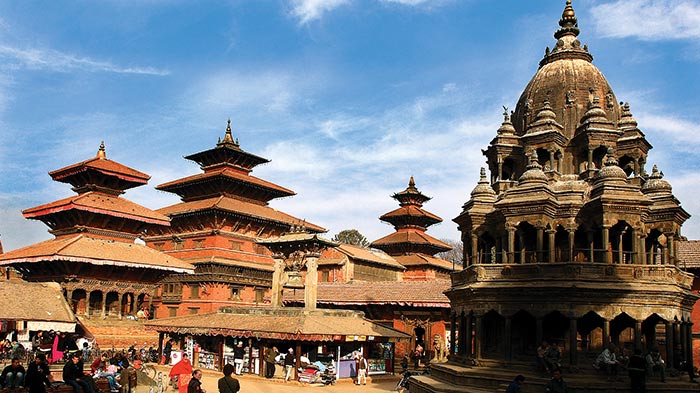 Durbar Square is on most tourist's itinerary

Nepal is also a country of extremes. The lowland plains of the Terai can have the tropical temperatures and the mosquitoes. The Himalayas can get to sub-zero temperatures, but the bright, blazing sun can bring some warmth during the day, even in the mountains. The temperature of Kathmandu often drops to below freezing in winter and can rise to an average of twenty-five degrees in summer.

During the rainy monsoon season from June to August, the rain can reach as much as 20-30 centimeters on average. However, the monsoon in Nepal is not like the typical monsoon of Asia. Rains usually occur during the nighttime, leaving the sky clean and clear by the morning, and making the Himalayan view even more dramatic. Some parts of the Himalayas, such as Manang, Mustang, and Dolpo are in rain-shadow areas, where the mountains are high enough to block the clouds.

Tibet is a land of extremes. Extreme altitudes, extreme weather, and extreme climates are all factors that can help you decide when to tour Tibet. The best times to visit Tibet are from April to October, when the weather is less cold, averaging around 10°C through the spring and summer months. This is the busiest time for Tibet, when the tourists come for the warmer weather and when the air has higher oxygen content. Once the harshness of the winter is out of the way, the heart of the summer can turn out to be very hot, and not really one for trekking the mountains. Spring and fall are the best times of the year for trekking.

Spring comes along in April, and the ice starts to melt as the weather warms up. Tibet normally reopens for tourists in April, after the normal closure of 5-6 weeks through February and March. During the Tibetan New Year in March, visitors cannot normally get the Tibet Entry Permit. The Tibetan summer is the busiest time of the year for tourism. The weather can range from cool to hot, through the summer months of June, July and August. Most people prefer the summer months as the air has higher oxygen content than the other seasons. In Lhasa, the summer temperatures can fluctuate between a pleasant 10°C and a warming 23°C. 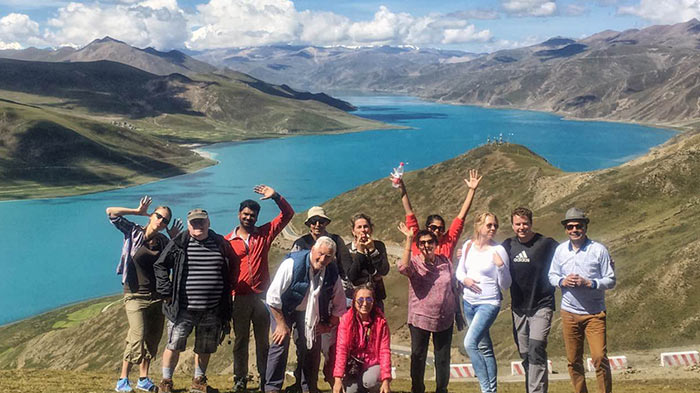 The monsoon season in Tibet is from July to September, with August being the wettest month. However, apart from the lower south east region, there is still not much rain across most of the region. In the southeast, where the capital, Lhasa stands, the rain is a lot heavier. With an average for the rest of the region being around 200 millimeters a year, the average annual rainfall for Lhasa is much higher, at around 500 millimeters. This makes the rainy season in the south east hotter and more humid.

Almost as busy as summer, fall sees clearer and cooler weather, and another good time for hiking and trekking Tibet mountains. And with less cloud cover, it can be one of the best times for photographing the mountain peaks.

With winter running from November to March, it starts to get colder, though often not as cold as people would think. And with fewer tourists and cheaper prices, the off-season from November to January can be a good time to come and relax in Lhasa. And with more local customs and festivities, you can be sure there is nothing lost by traveling off-season.

Bhutan's weather varies dramatically depending on the elevation. It rains all year, but the monsoon season from June to August is really wet and probably best avoided. Spring, from March to May, can also be a little wet, but the birds are in song and the wildflowers are out, which makes for incredible hiking, as does Autumn (September to November) with less rainfall and clear skies. Winter, from December to February, is a photographer's dream, with thick blankets of snow. However, road closures are common and temperatures can drop below zero at night.

The summer months - June, July and August - are monsoon season in Bhutan; a time of very heavy rain when, over three months, half a meter of rain falls in Thimpu, up to a meter falls in the eastern hills, and the mountains become obscured by thick cloud. A consideration that may help you decide to brave the weather is Bhutan’s calendar of tshechus and events: there are none, or very few tshechus held during January, February, June, July, and August. 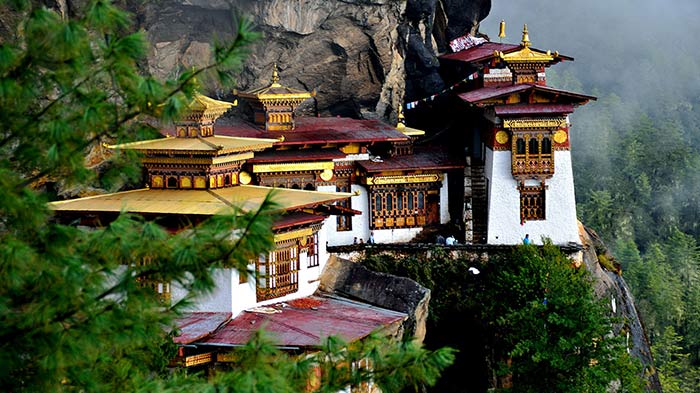 If you are planning a last-minute holiday, be aware that the Autumn peak months of September, October and November are the busiest, and flights may be booked up far in advance. To see Bhutan in all its glorious Autumnal colors, it is best to book early. March and April are a wonderful time to see Bhutan in bloom, as temperatures are pleasant and the valleys are abundant in nature.

Although May brings higher humidity, this attracts fewer visitors, so prices as well as crowds are greatly reduced at this time of year. However, the rhododendrons are still in bloom, making this a picture-perfect time for photographers and nature lovers. December is a cold month in Bhutan, but the skies are blissfully crisp and clear and the valleys are sunny with far-reaching views across the Himalayas, making the trip well worth it for those who can brave the chill.

Right Time to Visit Bhutan, Nepal, and Tibet Together

Since both Bhutan and Nepal are countries with mostly sub-tropical climates, they have a four-season climate system. Normally, the best time to visit Tibet is in the summer, when the weather is warmest, despite some small rainfall as it is the “monsoon” season. However, that is also the monsoon season in Nepal and Bhutan, and the rain there is much heavier and more frequent than in Tibet.

While both Bhutan and Nepal have fairly mild winters, making it a good time to visit, winter in Tibet is much colder, and does not make for an optimum tour experience, which leaves only Autumn and spring. Bhutan in September, October , and November is at its busiest, and booking needs to be done as early as possible, but it does coincide with the shoulder season of Tibet, and the slower trekking season in Nepal, making it a good options for a triple tour.

Spring is also another ideal time of year to combine a trip to all three place, as Bhutan has good weather and Tibet is just starting the tourist season, but neither are particularly busy. May to June is the peak time in Nepal for trekking and climbing, and sees many thousands of people hiking around Everest and Annapurna. However, if a long trek is not on the cards, early spring makes for the best season of all for this tri-region tour.

0 Comment ON "When Is the Best Time to Tour Nepal Bhutan and Tibet All Together?"