Map of Nepal and India

India, short for the Republic of India, is the largest country in the South Asian Subcontinent. Facing to Sri Lanka and Maldives, India shares border with Bangladesh, Burma, the People's Republic of China, Bhutan, Nepal and Pakistan.

Known as one of the four great ancient civilizations, India is the cradle for diverse religions, like Hinduism,Buddhism, Jainism, Sikhism, etc. It's also endowed with rich cultural heritage and diverse natural landscapes. Taj Mahal, the Ganges, Agra Fort and Harmandir Sahib are the top destinations for tourists to visit India. However, India has more to offer. Thanks to its ease access to neighboring countries and regions, millions of tourists have traveled from India to Nepal and Tibet.

As the world's 7th largest country, India covers a total area of about 2.98 million square kilometers, spanning 3,214 kilometers from north to south and 2,993 kilometers from west to east. The capital city is New Delhi and other metropolises include Mumbai, Bangalore, Chennai, Hyderabad, Ahmedabadand Kolkata, etc. It consists of 29 states and 7 union territories: 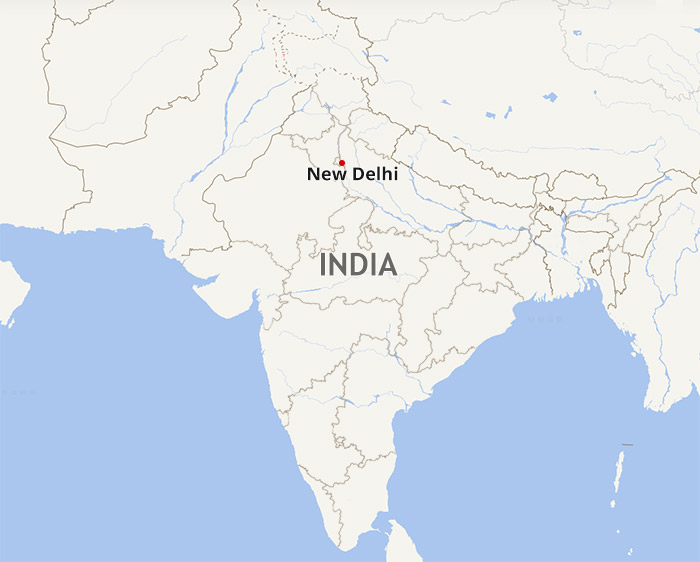 Note: Arunachal Pradesh as well as Jammu and Kashmir are the disputed border regions among India, China and Pakistan. 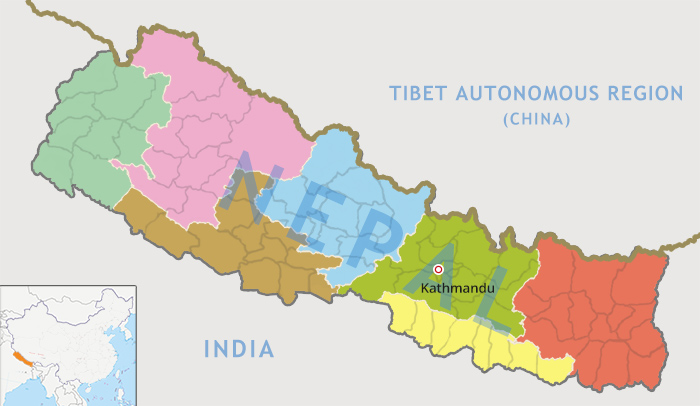 (Simple click to enlarge the map)
Nepal Map with All Districts

As the world's 94th largest country, Nepal has a total area of 147,181square kilometers. It runs in the northwest-southeast direction, extending 850 kilometers from north to south and 2,00 kilometers from west to east. Nepal's capital city is Kathmandu and other big cities include Pokhara, Biratnagar, Lalitpur, Bharatpur, Birganj, Butwal, Dharan, Bhim Datta and Dhangadhi, etc. In 2015, Nepal is divided into 7 provinces and 75 districts. Those administrative divisions are simply called as Province No.1, Province No.2, Province No.3, Province No.4, Province No.5, Province No.6 and Province No.7.

India is the largest country in South Asia, surrounded by the Bay of Bengal on the southeast, the Indian Ocean on the south, and the Arabian Sea on the southwest. In its northern area, India is bounded with Pakistan on the northwest, China, Nepal and Bhutan on the northeast, Burma and Bangladesh on the east. Major India Nepal border crossings are as follows: 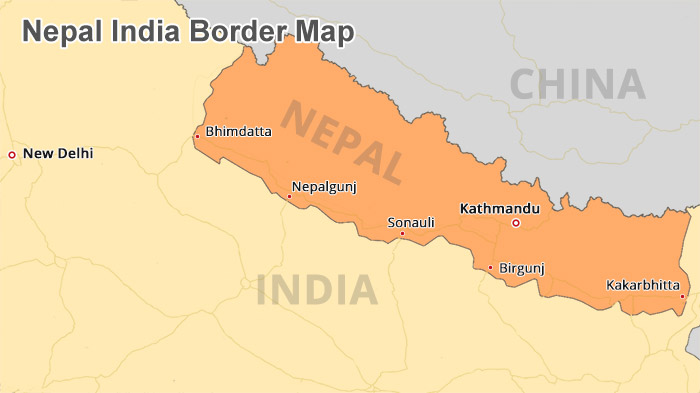 How to Travel from Nepal to Tibet? 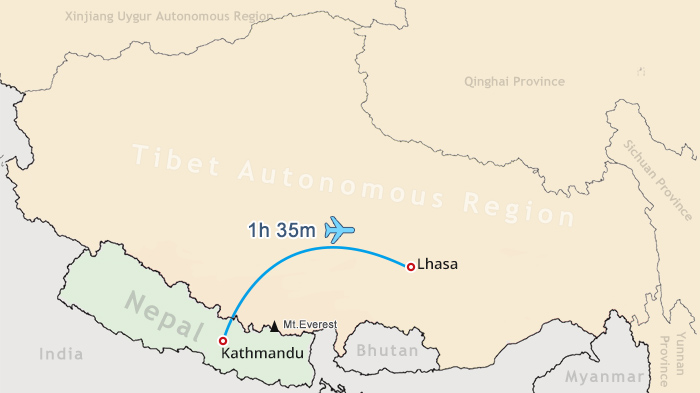 Note: If you enter Tibet from Nepal, a Group Tourist visa is required. See more at Tibet Travel Permit

How to Travel from India to Tibet?

Since there is no direct train and flight to Tibet from India, most tourists would choose to get to Nepal or China first and then transfer to Tibet.

1. Travel from India to Nepal and then fly from Kathmandu to Lhasa

a. Fly from India to Kathmandu
The fastest and easiest way to Nepal from India is by air. Tourists can take direct flights from Delhi, Mumbai or Kolkata to Kathmandu and tour around Nepal before flying to Tibet. 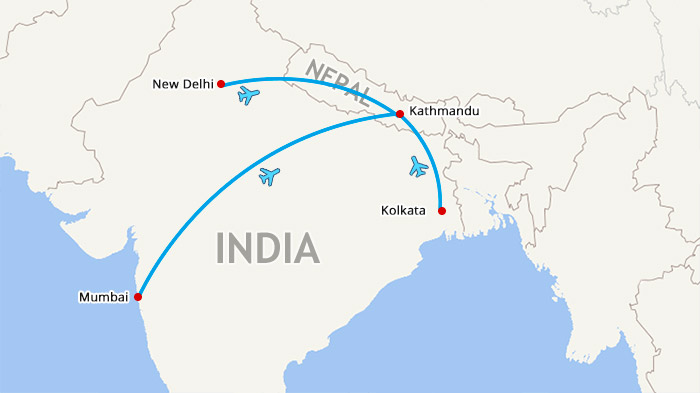 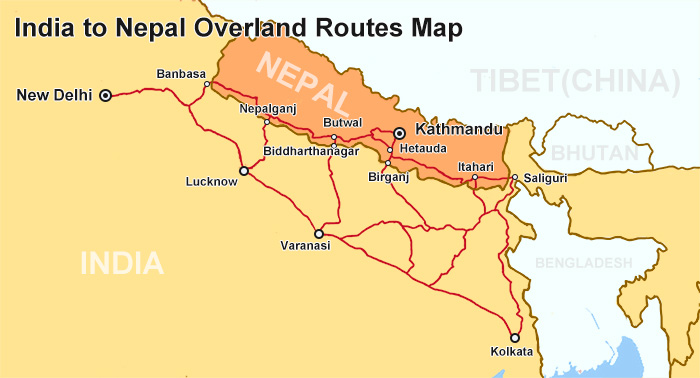 Note: If you enter Tibet from India via Nepal, a Group Tourist visa is still needed.

2. Travel from India to China and then go to Tibet by train or flight

Another option is to fly to China first and then take Tibet train or flight to Lhasa. Below are direct flights from India to China: 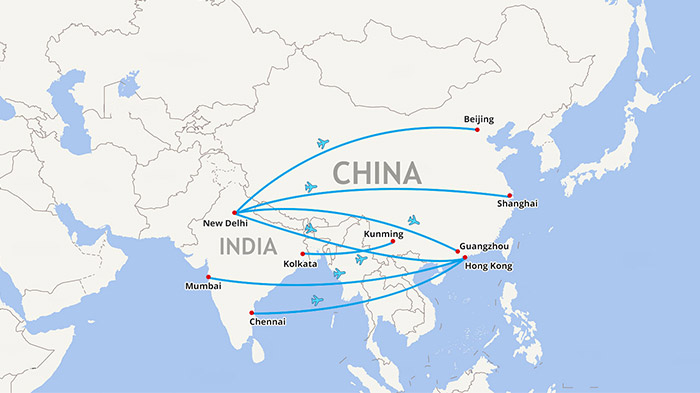 Besides, there are some connecting flights between China and India. Please feel free to contact our Tibet travel expert for more information.

Known as one of the four great ancient civilizations, India is the cradle for various religions and vibrant cultures. Attractions in India can be roughly classified into three groups, namely, ancient mausoleums, grand caves and holy temples. Here are top ten attractions in India. 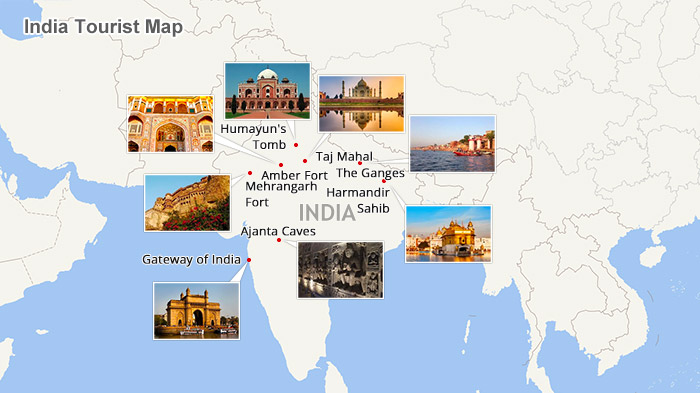 Taj Mahal-The Symbol of India
As one of the Seven Wonders of the World, Taj Mahal has its romantic love legend. Taj Mahal is actually a mausoleum, which was designed by Shah Jahan, the Mughal emperor, to treasure the body of his favorite wife, Mumtaz Mahal. It took 22 years and tens of thousand of workers to complete. Shah Jahan once intended to build an identical black tomb for himself at the other side of the river and connect it with his wife's mausoleum by a black-and-white bridge. But his son seized the throne and put him in prison. Tragically, Shah Jahan had spent the rest of his life in the Agra Fort only to see Taj Mahal in the far distance. The amazing thing is Taj Mahal will show you different characteristics at different times of the day.
Best Time to Visit Taj Mahal: at dawn or dusk
Address: Taj Mahal, Agra, Uttar Pradesh
Ticket price: Rs 750
Opening hours: 6: 00-19: 30

Amber Fort
Established in the year of 1592, Amber Fort was the residence of the Rajput Maharajas and their families. It's also known as Amber Palace with artistic Hindu style element. Located on the high hill, Amber Fort offers you a great chance to catch a panoramic view of Jaipur. One thing you shouldn't miss out is the Sheesh Mahal (the mirror palace). Embedded with glass, it seems like sparkling under the brilliant sunshine.
Address: Amber Fort, Jaipur, Rajasthan
Ticket price: Rs 100
Opening hours: 9:00-16:30

Mehrangarh Fort
Situated in the ancient town of Jodhpur, Mehrangarh Fort was constructed by Rao Jodha in 1459. It is one of the most spectacular castles in India. Standing on the giant cliffs, the well-preserved fort was built in yellow sandstones with solid walls surrounded by. The delicate carvings and marvelous courtyards reveal the city's glorious past. It's a fascinating place for you to dig deeper into Indian history.
Address: Mehrangarh Fort, Jodhpur, Rajasthan
Ticket price: Rs 250
Opening hours: 9:00-17:00

Hawa Mahal (Palace of Winds or Palace of the Breeze)
Constructed in the middle of the 18th century, Hawa Mahal has attracted tourists' eyeball for pink walls and countless windows. As a great masterpiece in Indian architecture, Palace of the Breeze was originally built for the women of the royal family to view the bustling streets and hilarious festivals. Walking around, you can feel winds blowing in from every corner. The best time to visit Hawa Mahal is the early morning when the palace is lit with the golden light of sunrise.
Address: Johari Bazar Road, Jaipur, Rajasthan
Ticket price: Rs 50
Opening hours: 9:00-17:00

The Ganges
The Ganges, also known as Ganga River, is India's mother river. It is the most sacred place in pilgrims' heart. Millions of Hindus come from every corner of India to Varanasi to bath in this holy river for purification. They believe that the Ganges water can wash away iniquity and pain, and help the soul ascend to the heaven. When the Hindus died, the family member would bring their ashes to the Ganges. There are more than 80 Ghats along Ganga River. Each one has its own name and function. Dasashwamedh Ghat and Manikarnika Ghat are the most popular ones among tourists.
Address: Ganga River, Varanasi
Ticket price: free
Opening hours: 24 hours

Gateway of India
Facing to Arabian Sea, Gateway of India is located in the Apollo Bunder, Mumbai. It was built in 1911 for commemorating the arrival of King George V and Queen Mary. This 26-meter-hight arch, a fusion of Indian culture and Persian characteristics, has become the symbol of Mumbai, welcoming guests from all over the world.
Address: Apollo Bunder, Mumbai, Maharashtra
Ticket price: free

Harmandir Sahib (Golden Temple of Amritsar)
Harmandir Sahib, also called as the Golden Temple Indiaa, is the holiest temple of Sikhism. Located at the center of Amritsar, Golden Temple was constructed by the fifth Sikh Guru, Guru Arjan in 1598. It is a blend of Hindu and Isalamic styles. You can appreciate the circular domes on the top and splendid towers nearby. It's also known as the world's largest soup kitchen. Regardless of religion, culture or background, all the visitors can enjoy the food for free.
Address: Golden Temple Road, Amritsar, Punjab
Ticket price: free

Squeezing between China and India, Nepal is famous for eight of the world’s ten highest mountains. Meanwhile, you can pay a visit to the splendid palace buildings and countless cultural heritages, such as Durbar Square, Temple of Kumari, Hanuman Dhoka, Swayambhunath, Pashupatinath, Golden Temple and so on. See more at Nepal Tourist Map