When is the Best Time to Visit India Nepal Tibet Bhutan Together?

A tour of India Nepal Tibet Bhutan is undoubtedly the adventure of a lifetime, and an epic journey that spans four of the stunning places on the planet. However, though all of the four places can be called neighbors of Himalayas, the completely different topography leads to different weather and travel seasons. So, for a long tour across India Nepal Tibet and Bhutan, you need to plan carefully. Please follow our advice and find out your best time for enjoying India Nepal Tibet Bhutan tour together.

India, the largest of the four, is a vast sub-continent with a very varied climate, changing from north to south, and even differing in the eastern regions of the Himalayas from anywhere else in the country. While there are many and diverse weather patterns across India, it is the Himalayas that stop the eastern areas of the country from experiencing the cold winds that come down from the north during the northwestern monsoon.

The best time to visit India depends largely on where you are traveling within the country. The high season across the country is generally from October to March, with a few changes depending on region. The south of the country experiences the dry season earlier, with a shorter rainy season, while the eastern areas experience intense hot periods from February to April, making it harder to travel. In the Himalayas, the best season is from February to May, when the weather is not so cold or wet. 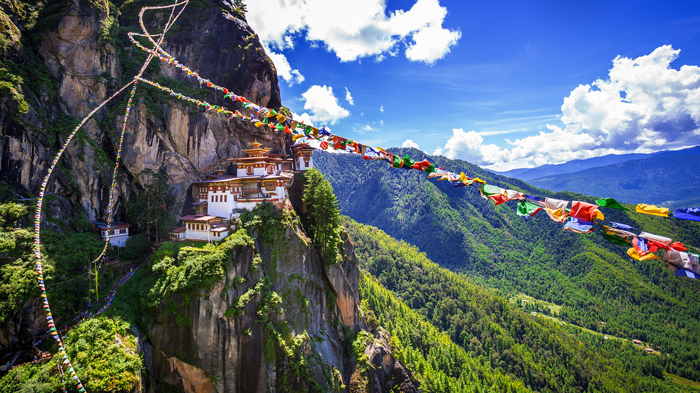 Nepal has a changing climate as well, aligned with its changing geography and altitude. In the mountains of the north, the best time to travel Nepal is from April to December, with a short and light wet season in the summer months from June to September, and a very cold patch in January and February. Spring and summer are the best times to travel in the mountains, while any time of year except the rainy season from June to September is good for traveling in the lower altitude areas of Nepal.

Bhutan has a similar climate to Nepal, with high mountains in the north and lower altitude lowlands to the south, filled with dense jungles and lush grasslands. The rainy season runs from June to September, making the best time to visit between October and April. January and February are the coldest times of year in the mountainous north of Bhutan, though more pleasant and cooler in the lush southern areas of the kingdom.

> Check for the detailed information about when is the best time to visit Bhutan.

Tibet has a unique and unusual climate. While it does experience wet and dry seasons, the wet season is barely noticeable, even in the lower areas to the east of the plateau, and what little rain falls usually occurs in the late afternoons and evenings. The Monsoon summer runs from mid-June to September and can be hot and humid, though for many tourists from lower altitudes, quite pleasant and comfortable. The peak season in Tibet runs from April to Oct, through spring, summer, and autumn, and the low season is from November to January, with a closed period for international tourists in late-February and March. Even then, the winters in much of the regions open for tourism is not as bad as people tend to think, and even Mount Everest can be visited in the winter months from December to January.

> Check for the detailed information about when is the best time to visit Tibet.

How to Choose the Best Time to Visit India Nepal Tibet Bhutan?

If you are looking at the best time to visit all four places together, then you need to consider the varying climates of each place before deciding when to visit. The rainy season in Bhutan, Nepal, and India can be a poor time to visit, as monsoons in the lower altitude regions of Bhutan and Nepal can be harsh, as can the monsoon across most of central and southern India. Ideally, the best time to visit all four would be from October to December and March to April, which gives you a very tight window of opportunity for traveling between India, Nepal, Bhutan, and Tibet.

Trekking in India, Nepal, Bhutan, and Tibet is normally a mountain experience, as there are some of the world’s best high-altitude treks in the Himalayas, which run through all four places. With February to May being the best time to visit the Himalayas in northern India, this really restricts the window of opportunity for visiting all four together for trekking. With the best time for trekking in Nepal Bhutan, and Tibet being in the spring, from April to June, ideally, you will only have April and May in which you can best visit all four places for trekking together. The low season in any country is the best time to visit if you are traveling on a budget, and for Tibet and Nepal, that is in the winter, from December to January. However, this is the high season in Bhutan and India, while their low seasons usually run through the wet season, generally from June to September. Shoulder seasons are the best bet to cover all four places, from October to December and March to April, when the prices are not yet too high, yet the weather is still good enough to travel.

The Himalayas are normally best visited in the spring and summer months, from March to May and October to December, and this can be done throughout all four places, as there is milder weather across the four regions during these periods. The summer would be the best time, if it were not so wet in the Indian areas of the Himalayas from June to October, and being so cold from November to January makes it harder to get to. 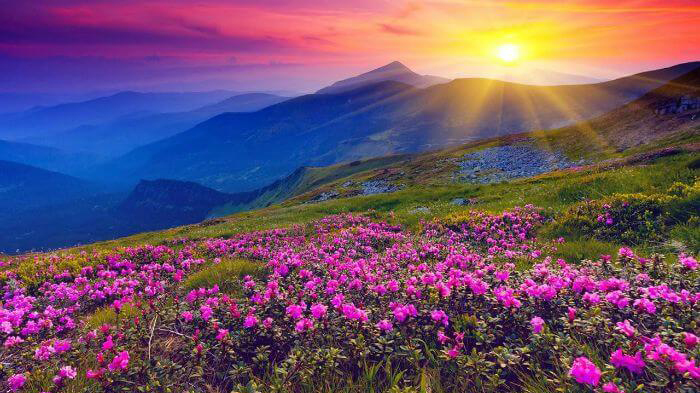 The Himalayas can be visited in most places throughout the year, though, with the exception of Tibet which is closed in late February and March for international tourists. April and May are ideal times to get the best of the Himalayas in all four places, as the snows that dominated the mountains have receded to above the permanent snowline, and the weather is starting to warm up for the beginnings of spring.

If you are looking for religious festivals, then you could be in no better place than India, Nepal, Tibet, and Bhutan. Four devoutly religious regions of Asia, with huge populations of Hindus and Buddhists, you can expect to see hundreds of festivals throughout the year across the area, and there are plenty of festivals that are well worth visiting.

India has innumerable festivals throughout the year, and there is really no best time for festivals, as there are more than a dozen festivals and religious ceremonies every month of the year. Some months have fewer festivals than others, such as February, July, and December, but overall, there are more festivals in the Indian calendar than in the other three places put together. The most important festivals of the year, for many travelers to India, are usually Diwali in November, Holi in February, and Dussehra in October. Diwali is the most prominent festival in the country, and is held across the whole of India, to mark the return of Lord Rama after his 14-year exile. Holi, also known as the festival of colors, is another of the most famous Indian festivals, which is held in March to signify the victory of good over evil, as well as the arrival of spring, and important occasion in the Hindu calendar.

Bhutan is another country that has a large number of festivals throughout the year, and this devout Buddhist kingdom takes it festivals very seriously, with national holidays on all of the most important festival dates throughout the year. Known as Tsechu, these Buddhist festivals are a common sight for travelers to the region, with the most festivals being held from March to April and from September to the end of the year in December. The main festivals of the year in Bhutan are the Paro Tsechu, the Thimphu Tsechu, and the Jambay Lhakhang Tsechu, which are a huge part of people’s lives in Bhutan, and always end with the unveiling of a huge thangka painting of Padmasambhava, known in Bhutan as Guru Rinpoche. While Nepal is also a hugely Hindu country, there are nowhere near as many festivals as in India, the home of Hinduism, though there are enough festivals throughout the year to be able to see at least one no matter what time of year you visit. The bulk of the religious festivals in Nepal are normally in September and October, when there are at least two major festivals a week throughout the early autumn months. Dashain is the largest and most popular festival in the country, which runs for around six days in early October. Dashain is the celebration of the vistory of the goddess, Durga, over the evil Mahisashur, and has a symbolic meaning in Nepal, deeply rooted in Nepali society throughout history. Tihar is the other major festival that should not be missed, which is held in late October or early November, and is a celebration of lights in honor of the goddess, Laxmi.

Tibet is a devoutly religious Buddhist region, which incorporates the Buddhist beliefs of the people into everything they do throughout their daily lives. Festivals in Tibet are an important part of the local culture, and are celebrated fervently by all Tibetans, with Losar being the single most important festival in the region. Known as the Tibetan New Year, this festival lasts for up to three weeks (preparations can start at least a week before Losar and last for around 15 days after) and is a time for Tibetans to be at home with their families, which sees many people traveling home in the week before the event. The holiest of the religious festivals in Tibet is the Saga Dawa Festival, which is held in May and celebrates the birth, enlightenment, and death of Buddha. An important month for pilgrims to Tibet, the most spectacular of all the Saga Dawa festivals in the region is held in Darchen and Tarboche, at the foot of Mount Kailash, the world’s most sacred mountain.

If you are planning a trip to India, Bhutan, Nepal, and Tibet, then planning is an essential part of the process, and with Tibet and Bhutan having a requirement to be on pre-booked tours, this is not actually as hard as it might seem. The main thing to remember is to plan the trip according to your own interests in the four places. Trekking is best done in the spring or fall, while travelers on a budget are best to travel in the shoulder seasons to get the best deals on prices, thanks to the varying high and low seasons in the four regions. If you are planning for visiting the Himalayas, then the early part of the year is best, and if festivals are your thing, then plan around Tibet and incorporate the other three countries into the Tibetan tour dates, as they have a wealth of festivals throughout the year.

0 Comment ON "When is the Best Time to Visit India Nepal Tibet Bhutan Together? " 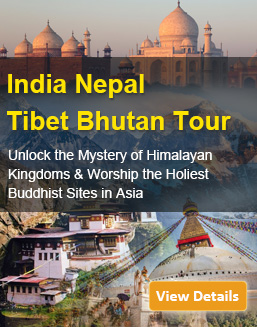