Bhutan Weather and Tour in September: is September a proper time to pay Bhutan a visit?

One of the most exclusive tourist destinations in Asia, September in Bhutan is when the tourist season restarts with a vengeance. After the hot, wet, and humid months of summer, the land is drying up at last, and the trekking can begin again in earnest, as the temperatures begin to cool and the sunshine lasts a little longer than a few hours a day. Skies become clear and few clouds now cover the mountain peaks, giving great views of the mighty Himalayas along the northern trekking trails. As the leaves on the trees begin to change color, the fresh crisp air is a welcome relief from the hot and humid air of the summer months, and just being outside again is an exhilarating experience.

Bhutan aims to provide quality tours for all its visitors, and uses a percentage of the cost of the tour to alleviate poverty and maintain the landscape and scenery in its unspoiled state, which has made Bhutan one of the more expensive places to visit. However, with the cost of the vacation covering everything that you will need whilst within the kingdom, what may appear to be expensive is really good value for money. And in September, the tourist season restarts with a vengeance.

The Climate and Weather Condition of September in Bhutan

September finally sees the end of the monsoon season coming into view, and the rains that have pestered the kingdom since June are finally dying out, though the humidity still remains for much of the month. The sticky temperatures begin to become milder, with lower daytime temperatures making the country more comfortable for tourists. 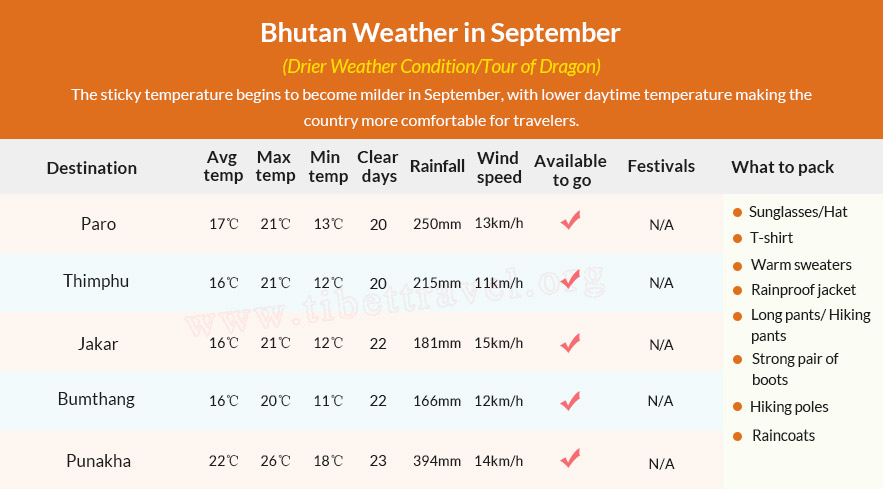 While September is generally thought of as the restart of the tourism seasons, it is useful to remember that the monsoon is not yet over for good, and you may still encounter the odd shower or even a heavy downpour on rare occasions. By the end of the month, the temperatures have dropped to be much more comfortable across the kingdom, and the cooler air and clearer skies mark the upcoming start of the trekking season once again.

In Paro, the temperatures may not have dropped much, but the rainfall definitely has, and you can expect to see a lot less by the middle of September, as the monsoon starts to head out. The northeast monsoon is still far away, so you can expect showers for around half of the month, and the temperature has barely changed, reaching highs of around 21 degrees.

Thimphu sees a slight drop in temperature in September, though less of a drop in rainfall as there was in August. The area can still be a little wet, and you can expect rain for more than half of the month still, before the monsoon fades away as September comes to an end. However, while temperatures may have dropped by as much as 1 degree, humidity is still high.

Jakar in the Bumthang Dzongkhag sees little in the way of change in September, with the exception of a major drop in rainfall in the latter half of the month, By the end of September, most of the rains in Jakar will be gone, with only a few odd showers here and there, but with high temperatures still, to keep it rather humid until the cooler weather rolls around.

With the massive drop in rainfall, Bumthang sees an increase in tourism as the visitors begin to flock back to the kingdom for the beginning of the trekking season. Rainfall is down to around half of what it was in August, and with temperatures barely dropping by half a degree, on average, the warmth and the sunshine are back to bring in the drier weather of late September for the trekking season.

Punakha also sees a huge drop in rainfall, from more than 500mm in August to less than 400 in September, though this is still high, and there is little chance of getting back on the trekking trails yet. Temperatures have barely changed though, and the warmth and relatively high rainfall in the area (compared to Thimphu and Paro) means that humidity is still high until October.

What about Bhutan tours in September?

Touring Bhutan in September is possible, though mainly for sightseeing for most of the month, until some of the trekking trails in Bumthang, Paro, and Thimphu dry up a little more. September is more about the lushness of the kingdom and the stunning views of rolling green hills and verdant river valleys, as well as the awesome Dzongs and the unique culture of the local villages.

At the higher altitudes, you can expect it to be a lot cooler, and much drier too, which gives rise to the trekking tours that are famous in Bhutan. The monsoon is not yet over, and while there are still heavier rains in some areas, generally it is a lot drier and a lot more comfortable, especially by the time September draws to a close and October rolls around.

Besides the listed tours we recommend above, we still provide you with some other tour routes which are still quite appropriate for you in September. Check to get the most popular Bhutan tours for detailed information.

How about Bhutan trekking in September?

September is the restart of the trekking season in Bhutan, and the kingdom sees a major influx of tourists that are eager to get back onto the awesome trails again after the close of the monsoon season. While the rains have done their damage to the trails, the sunnier days soon dry them up, and the trekkers can get on with their delightful tours of the higher mountains and the rolling hills of the kingdom.

The weather in September in the higher regions below the Himalayas is pleasant, and while a little cooler in the evenings, is ideal for trekking, especially as there are not yet too many visitors making the trails too busy. While it does not get as busy as places like Nepal for trekking, it is much more pleasant to be able to experience the trails without meeting up with other trekkers. Solitude is the name of the game for trekkers in September in Bhutan, and there is plenty enough of that to go around.

Camping at the Tshorim Lake campsite during the trek in Sep.

The trek ascends you up to some high-altitude places where the views in Sep. are super fantastic with boundless prairies and splendid distant mountains. If you fancy some more magnificent sceneries and not afraid of the challenge, then this trek is really worth trying.

In order to maximize your satisfaction, we give you the most professional local guide and prepare all the things that are necessary during the entire trip. Please contact us for further information.

Insider trips:
1. We have provided some other popular Bhutan trekking routes to present more choices.
2. In Sep., the best time for the long-anticipated Snowman Trek has eventually returned again. Lots of trek lovers are excited and gather together to challenge this most arduous trek in the world. The rain has stopped and the temperature is perfect either at the foot of the mountains or in higher areas.

While there may be no major festivals in Bhutan in September, it is the time of the world-famous Tour of the Dragon. Unlike most countries, September in Bhutan sees one of the world’s hardest cycling races take part in the mountains and hills of the country. A 200-kilometer race that can only be classified in the cycling world as an “ultra-marathon” mountain bike race, this unique event is one of the most challenging cycling events on the planet.

The Tour of the Dragon starts on the first weekend in September, and covers a total distance of 268 kilometers, crossing over four high mountain passes, finally finishing in the town square in Thimphu. A single-day race, it is classed as one of the toughest single-day events in the cycling world, and is open to all comers, irrelevant of experience.

The race starts at around 2:00 am, and riders need to make certain checkpoints before a set time in order to continue on with the rest of the race. Those who fail to make the deadlines for each checkpoint, usually the four passes on the route, will be disqualified and not be allowed to continue. An intense event that has become a major race for mountain bike racers from around the world, the race is started and finished in the presence of the Bhutanese prince, His Royal Highness Prince Jigyel Ugyen Wangchuck, the younger brother of the current Dragon King.

What to pack for visit Bhutan in September?

September is not as cold as the winter months, though while the temperatures may be pleasant in most of the country, in the higher regions it is already starting to cool down. Summer clothes are still the main order of the month, but it is advisable to take some warm sweaters if you are venturing north. Trekking has already begun, and some of the trekking trails that are open will need you to have some warm layers as the nights draw in and get a lot cooler in the mountains.

Layers are the best option for maintaining a steady temperature when trekking, and raincoats or waterproofs are a requirement for all trekkers, as rains can still be common, even in the mountains. Good strong boots for the trekking are a requirement, as the trails can still be muddy and messy, and hiking poles are a good idea for the more slippery patches.

Is it easy to get the Bhutan Visa in September?

As with every other month of the year, getting a visa for Bhutan is part and parcel of the tour booking, and there are rarely any issues with getting a visa to enter the country once you have booked and paid for your pre-arranged tour. Bhutan has no restrictions on tourism dates and when you can visit, even during the Bhutanese New Year.

September is the start of the trekking season again in Bhutan, and as the weather gets cooler and drier, tourism picks up one more. September sees a huge increase in tourism in Bhutan, as the rains start to die out in favor of cooler and drier weather, and for those heading for the mountain trails, it is one of the best times for a little solitude trekking. And where better to get that solitude than one of the most isolated countries in the world.

0 Comment ON "Bhutan Weather and Tour in September: is September a proper time to pay Bhutan a visit?"