While Bhutan may be on the edge of the Tibetan plateau, with more than half of the country covered in mountains and high foothills of the Himalayas, it is not as cold as many people would think. Similar to Nepal, the southern part of the country enjoys a sub-tropical climate, and temperatures in the winter are normally around 15 degrees, increasing to a summer high of around 30 degrees. The warmer temperatures are found in the east of the kingdom, with milder temperatures in the west due to the high mountains, and it can get colder as you travel further into the mountain regions.

The peaks of the Himalayan Mountains are covered in snow all year round, and the temperature difference throughout the year in the mountains is less than in the southern sub-tropical region. Mountain temperatures normally range from 10 degrees in the summer to around freezing in the winter, which makes it possible to visit the kingdom all year round. With plenty of festivals and events going on throughout the year, there is always something exciting to see when you visit this tiny kingdom known as the “Land of the Thunder Dragon”.

While it is possible to visit the Kingdom of Bhutan all year round, there are still peak and off peak periods, and autumn is the most popular time of year for travelers. A number of big festivals in autumn means more tourists visiting the kingdom, which pushes the prices up to cater for the peak tourist season, although crowds in Bhutan is not a thing thanks to the policy on environmental and sustainable tourism. Spring is a delightful time to visit, with the spring flowers in full bloom, while the summer monsoon is one of the lower seasons for tourism. That said, the monsoon period is not as bad as in more southerly Asian countries, and it is still worth visiting to see some of the summer festivals, although the peaks are often obscured by clouds. With winter being relatively mild in comparison with other areas of the Himalayas, a visit in the off season means few other travelers, clear skies, and cold but fresh air that is wholly invigorating.

The coldest time of the year in Bhutan is from December to February, especially up in the mountain regions. However, the clear skies and warmer valleys in the south make it a great place to visit off season, and the views of the Himalayas, covered in snow, are spectacular. It is a popular time to visit to see the black-necked cranes that nest in the lower regions of Bhutan during the winter, and the Minimum Daily Package is lower in the off season months. The Trongsa Tsechu takes place in early February, and is a small local festival that has some of the kingdom’s most elaborate costumes, worn by the dancing lamas. 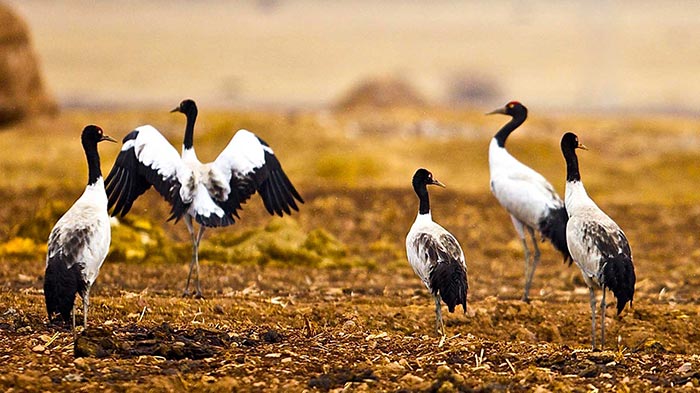 You can see the black-necked cranes from December to February

One of the most popular times of the year to visit Bhutan is in March and April, when temperatures start to rise and the early spring flowers are in abundance. The valleys become green and lush as spring brings the new growth, and the rhododendron flowering season runs from March to May, when the colorful blooms cover the hillsides. Spring is also a good time for trekking in Bhutan, and is a great way to see more of this stunning nature scenery. Mountain walks are at their best in the spring, and the higher altitude teahouses are open again for travelers. 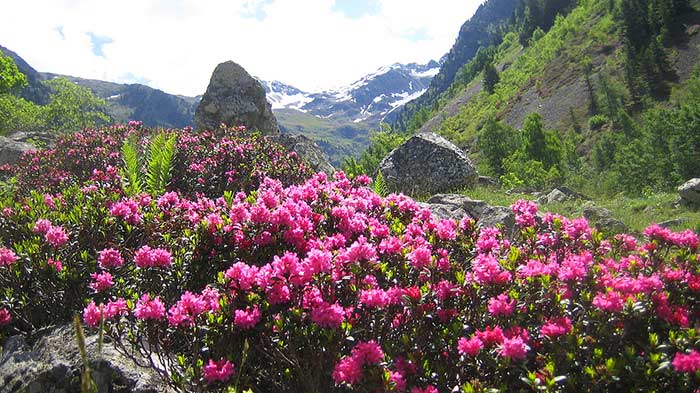 May is a time of fewer visitors to Bhutan, as the temperatures start to rise, and humidity is on the increase. Clouds start to descend over the mountains, obscuring the views of the Himalayan peaks, which makes it a great time to visit for a little peaceful relaxation, at a warmer time of year. The monsoon rains are not yet in, and the rhododendrons are still in bloom, which makes it a great time to visit for nature photography. It is also the mating season for the Takin, a local species of Gnu that looks like a cross between a goat and an antelope. The Motithang Takin Preserve is the perfect place to visit to see these amazing and unique creatures in their natural habitat.

Summer is the monsoon season in Bhutan, and a low season for tourism. However, as with many high-altitude countries in Asia, the monsoon rains normally only come in the late afternoon and early evening, so it is not a case of raining for days on end, although that can happen on rare occasions. Daytime exploring is still possible, although it is not ideal trekking weather, and some trails may be waterlogged and muddy. A raincoat is necessary just in case of the odd downpour, and the best views are had in the morning after the nighttime rains. Summer is also one of the best times to take in the unique Bhutanese spa experience, and do a little pampering. 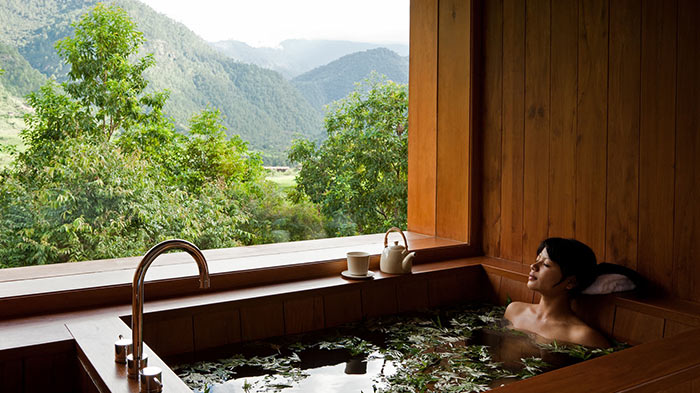 September is the start of the hiking season in Bhutan, and also the start of the major festival season. The spectacular views and pleasant climate make it a great time to start in on the many hiking trails that lead through the mountains, and temperatures can still be as high as 25 degrees during the day, with a little cooler weather in the evenings. Hence, size the chance to trek in Bhutan and experience local festivals. 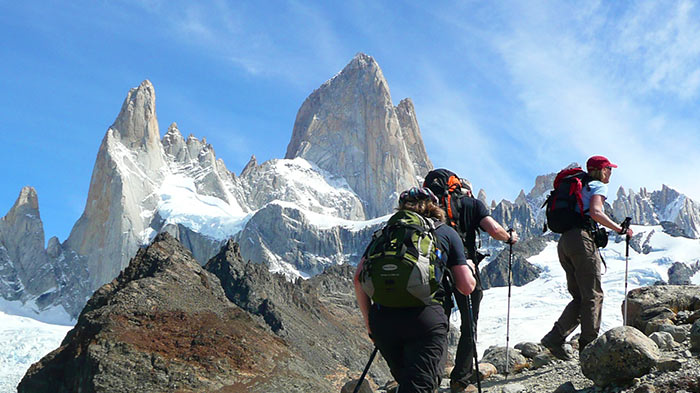 You can trek during September to November

October is the most popular time of year for tourism, and around 80 percent of all visitors to the kingdom visit in October. While there is a restriction on how many visitors can enter Bhutan at any one time, it is best to book well in advance of your trip, since it is the busiest time of year. If you book late, there is a chance that you will not get into the country until later in the year. October is also the best month for trekking, and the trails are all dried up and clear by this time of year. Skies are clear and temperatures are pleasant and not too hot or cold, with some great views of the kingdom’s highest mountain peaks.

November is the tail end of the autumn season, and a time for fewer visitors, which makes it a great time to visit to see the inbound migration of the black-necked cranes from the Tibetan plateau to their winter-feeding grounds in the Phobjikha Valley. The birds remain in Bhutan until late February, when they move back to the plains around Lhasa in Tibet. There is even a celebratory festival to mark the arrival of these unique birds, and it is best to plan ahead if you want to see or take part in it. The festival is held in the courtyard of the Gangtey Gompa, and is done to promote the preservation of this endangered species.

The religious Paro Tsechu takes place all over the kingdom in March, and is one of the most popular festivals of the year. Monks dress up in colorful costumes with masks and re-enact the ancient legends of the Land of the Thunder King and the history of Buddhism in the kingdom. The festival culminates with a Thangka unveiling ceremony, when the 350-year-old, four stories high Thangka showing the deeds of Guru Rinpoche is unfurled. 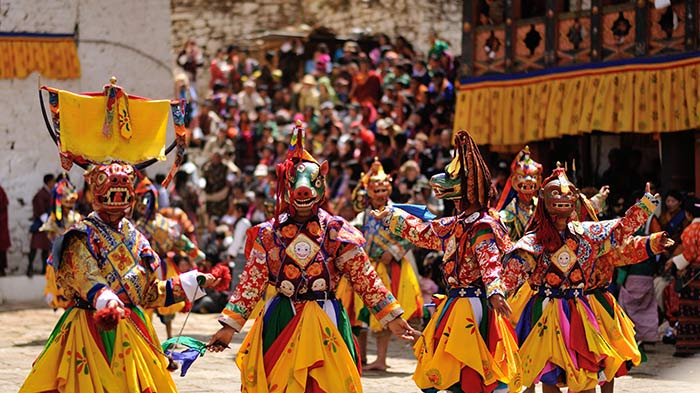 The unique Punakha Drubchen festival is a dramatic recreation of a 17th century battle with the Tibetan army that marched across the border in the Himalayas. The local militia performs the reenactment of the time when the local villagers in the mountain region marched to battle and drove the Tibetan forces back across the border, and a lasting peace was found in the kingdom. The Punakha Tsechu immediately follows the Punakha Drubchen.

July sees the celebration of the way of life of the Haa Valley nomadic herders, and this summer festival is set in the Haa Valley with spectacular sweeping views of the mountains. The festival is a happy event that showcases the culture, religion, and sports of the nomads, and tourists can participate in the event, with yak riding, ancient folk dances, or just try the local cuisine. 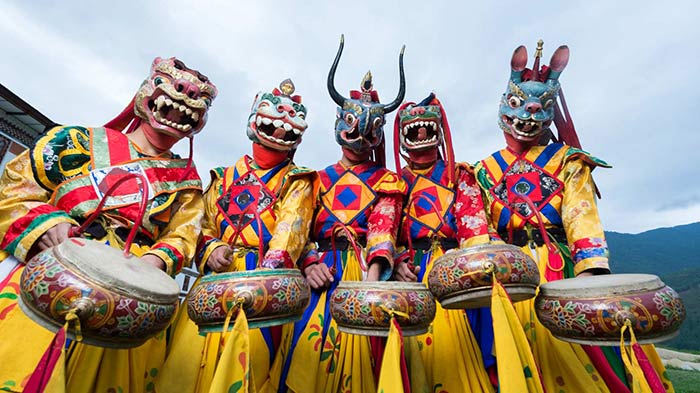 The Thimphu Tsechu is one of the biggest festivals in the kingdom, and is held in mid-September in the nation’s capital. Thousands of Bhutanese people flood the city for the festivities, which last for three days and are set as a national holiday. The crowds pack themselves into the Tashichho dzong courtyard, to watch the many religious mask dances that are performed throughout the three-day event.

Set in the middle of October, this festival is held in honor of the Guru Rinpoche, who established the Jambay Lhakhang Monastery in Bumthang District in the 7th century. Legend says that an ogress was killed and dismembered, and her body parts scattered across Tibet and Bhutan, with a fortress built on each site to pin her to the earth forever. The festival includes a fire ceremony, known as Mewang, which is one of the highlights of the festivities, when locals run beneath a flaming arch of dry grasses. Then there is the Tercham, or the Dance of Treasure, which is held in the middle of the night and is performed by naked masked dancers. It is believed that the dance will bless the infertile women of the district and enable them to bear children.

0 Comment ON "Best Time to Visit Bhutan: monthly guide to Bhutan and festivals" 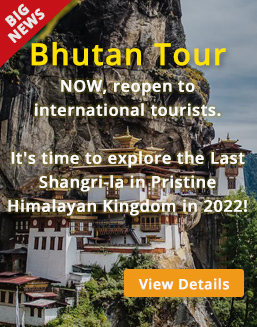