Where Are the Best Places for Bhutan Bird Watching?

Bhutan is a landlocked country in the south of the eastern Himalayas that has one of the most unique and varied topographies of any country in the world. From the north to the south of this last Himalayan kingdom, the elevations changes, with high altitudes of more than 6,000 meters in the mountainous north to the lowlands and sub-tropical forests of the south, barely 500 meters above sea level. With such a wide range of altitudes comes a wider range of habitats, from deciduous forests and sub-alpine areas to dense sub-tropical jungles and wetlands and plains. Many of the species of birds in Bhutan have their own preferential habitats, which is why you can find hundreds of species of birds in all of the various areas of the country.

Overall, while you can find birds in almost every part of Bhutan, there are certain Bhutan birding areas where they are dominant and more widespread. For those looking at taking a bird watching tour of the country, we recommend taking in the sites where the birds flock most. These areas include wetlands and marshes, deciduous forests in the temperate areas of the country, the lowland sub-tropical jungles of the south, and the alpine scrublands of the northern highland regions below the heights of the Himalayan Mountains.

Where are the best bird habitats in Bhutan?

For birding in Bhutan, there are many ways to classify the zones and areas, often based on the natural habitats of the birds, the climates of the areas, and even the vegetation that grows naturally there. Knowing where to go for birding at its best is an important factor to consider, and the best way to know this is to listen to the local experts on the avian species indigenous to the kingdom. The areas can be classified into four main types of sites, which range in different areas across the country. 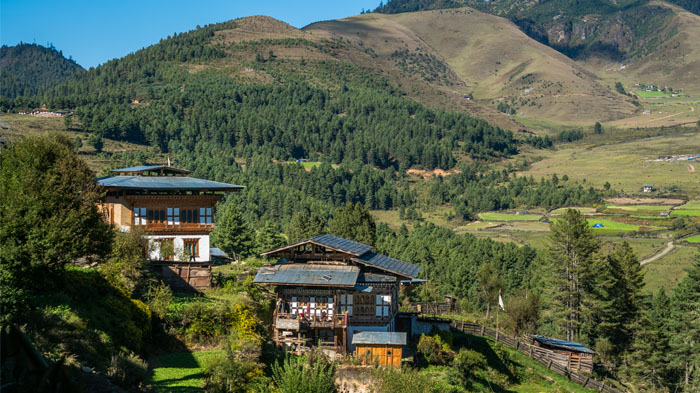 Phobjikha for bird watching, especially the home to the endangered black-necked crane in winter

The sub-tropical belt of Bhutan falls mostly in the southern regions of the country, where the main vegetation consists of broad-leaved plants and trees and the many varieties of deciduous broad-leaved trees that can be found in the mid-southern areas, with the exception of Punakha. Areas such as Semgang, Phobjikha, Tingbitti, Yongola, Trongsa, Yonkola, Dewathang, Mongar, and Trashigang are the main bedrock areas of bird watching in the kingdom and contain a wide variety of birds. The warm weather, moist climate, and broad leaves of the forests are ideal conditions for a huge number of local and migratory birds in Bhutan.

Many of the birds found here are indigenous all year round, and with the exception of the monsoon season, when it is too wet in the south to travel easily, birding can be done at almost any time of the year.

Of the birds found in this area of the country, the main ones to look out for are the Slaty-backed Forktail, Gorgeted Flycatcher, White-throated Laughing thrust, Eurasian Jay, Wedge Tailed Green Pigeon, Mountain Imperial Pigeon, Verditer Flycatcher, Himalayan Monal, Tragopan, pheasant, and Parrotbills in the lowland bamboo forests.

The temperate belt that lies around the area of Paro, Thimphu, and Bumthang is considered to be the main region of central Bhutan for birding, based on the conditions of weather, climate, and vegetation, as well as the increased altitude. 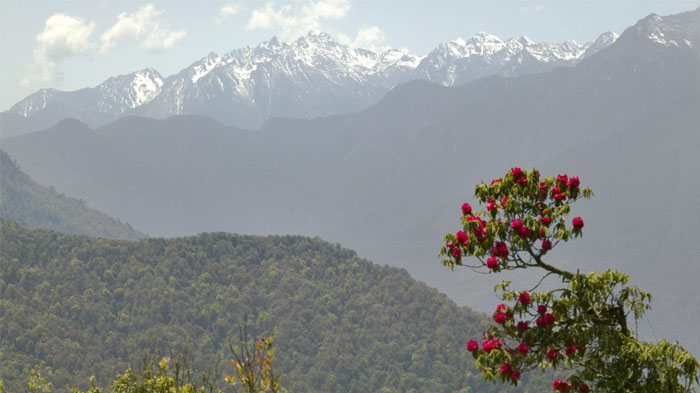 Moreover, the mountain passes that separate the lower valleys are also considered to be part of the alpine scrub zones for birding and their habitats. Along with these alpine scrub areas, the main vegetations of oak, conifer, and rhododendron make the perfect habitats for a wide variety of avian species.

The temperate zone has some birds that can also be found in the sub-tropical zones, such as the Tropogan and the local pheasant. In this deciduous region where the weather is cooler, you can find many species of birds that cannot be found to the north or south, including the Black, faced laughing thrush, brown dipper, spotted laughing thrush, Fire-capped Tit, Scarlet Finch, Black Drongo, Chestnut-bellied Nuthatch, Gorgeted Flycatcher, White-throated Laughing-thrush, Eurasian Jay, Wedge Tailed Green Pigeon, and the Mountain Imperial Pigeon.

In the higher alpine areas, which include the Chelela Pass, Docula Pass, Pele la Pass, and Thrumshing la Pass, there are also some rare birds that add to the natural beauty of this unique alpine landscape in Bhutan.

Where are the best places for Bhutan bird watching?

While there are places across the country where you can see the natural indigenous species of Bhutanese birds, there are also places where you have a better chance of seeing a wider range of birds, and in bigger numbers as well. The temperate belt, which runs across the center of Bhutan from west to east, is one of the most ideal areas for birding, especially around the areas of the farmlands, the lower and upper broadleaved evergreen forests, the riversides, subalpine forests, and shrubberies in Paro, or the blue pine and evergreen forests of the Thimphu Valley.

Around Punakha and Wangdue Phodrang you can find plenty of species of birds in the temperate forests of rhododendron and magnolia, or the lower sub-tropical zone to the south. Trongsa is a region of dense, evergreen forest characterized by moss and lichen-covered oak and rhododendron trees, as well as horse-chestnuts, maples, laurels, and alder. A prominent area for birding in Bhutan, this habitat contains a lot of the rarer species of birds in the kingdom.

In the east and southeast of the country, you have two habitats that are predominant when it comes to birding. Around Trashigang, the temperate vegetation and broad-leaved trees such as maple and chestnut are ideal for some of the more popular species to spot, such as the Black Eagle and the Hornbills, not to mention the colorful Beautiful Nuthatch. As you head south to Samdrup Jongkhar, the vegetation gives way to more sub-tropical forests, close to the border with India, where you can find such amazing species as the Silver-eared Mesia, White-rumped Shama, and Greater Flameback. 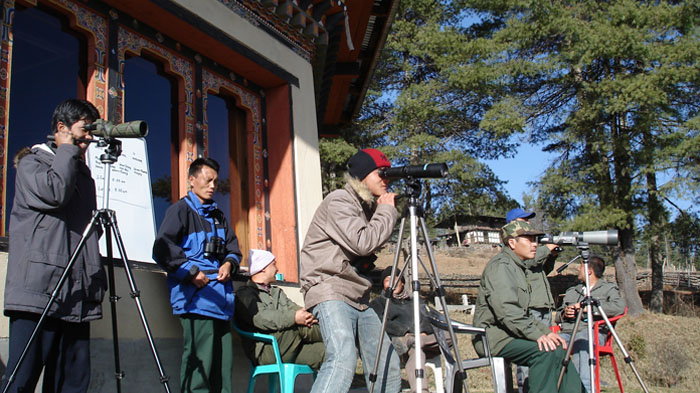 These areas, as well as a few more, are the best places to visit for birding, due to the huge number of birds that reside naturally in their native habitats here, a little further away from civilization, or the Bhutanese version of it, which barely encroaches on the habitats of these avian wonders.

How we can get to these best bird watching places?

There are a wide number of places where you can get in some great birding, and for some places, especially those close to the towns and cities such as Paro and Thimphu, traveling is easy. Your guide can take you there in your private vehicle easily and within a short time, and you can get the most out of the shorter drives by having more time for birding.

In some areas, such as the lush forests and local wetlands, it is a little harder to get to, especially as there are few paved roads in some parts of Bhutan. One of the best ways to get there is to take a short trek along the local trails to the sites that are best for birding and camp out for a day or two to make the most of the long journey. This is also a great time to get in some great views of the local landscapes and enjoy the fresh vibrant air.

A few remote areas are also located in the alpine areas at higher altitudes and require a short trek to get to. However, at higher altitudes, camping is not always possible, so the route has to be short enough to complete in one day, with a return trek included. You can drive to the closest road site to the birding site, and take a short 2-3 hour trek to get there and spend the day birding before heading back for the night.

Is there any document we need to prepare in advance before we head for these places?

Aside from the Bhutan Tourist Visa, which is applied for by us on your behalf once you book your tour, there are some other permits that you will need for traveling to the different areas of Bhutan for birding. As independent travel is not permitted in Bhutan, with the exception of Indian, Bangladeshi, and Maldivian citizens, travel permits are required for touring around Bhutan. Your basic entry visa is valid for your stay in Thimphu and Paro, but for any area outside these two valleys, additional permits are required.

The area outside the Thimphu and Paro Valleys is restricted for outsiders to Bhutan, and before being able to travel outside, you will need to have a special permit for travel, known locally as the “Road Permit”. Bhutan has strategically-placed checkpoints on all the major roads, where passport, visa, and permit will be checked and endorsed. The Road Permit is only obtained by the tour operator, and will only allow you to travel to the places listed on your pre-arranged itinerary. Once your tour is over, the permit is returned to the government, where it is checked for any deviations from your main itinerary.

>> How to Get a Bhutan Visa and Permit Successfully?

Dos and Don’ts When We Arrive at These Places

The main essence of any birding tour is to watch without intervening and disturbing the birds in their natural habitats. It is prohibited to try and catch the birds to take them away or to try and collect their eggs, and you should always maintain a respectful distance from the nests so as not to scare off nesting birds. Once startled, some of the birds, especially the small ones, will never fly back to their nests or feeding grounds

Often, scared birds will not return to a tampered nest, which means the young will die or eggs not hatch. You should also avoid bright clothing, and stick to neutral colors that match the local vegetation and avoid trying to feed the local birds with human food, as this may cause them distress, illness, and even be terminal.

What We Need to Prepare for a Bhutan Birding Tour

The equipment that you use for a birding tour in Bhutan is really your own personal preference, and you can bring the things you feel you need for the tour, though we do recommend not bringing a vast amount of gear that will be hard to travel within the remote areas of the kingdom. For those that are novices, binoculars are a must for any birding tour and should have at least a 70-200x zoom level.

Camera gear is good for catching those unforgettable and rare shots of the birds that you will not find anywhere else in the world. A DSLR is best, with interchangeable lenses, including a removable zoom lens of at least 30-70x zoom level, for optimum visibility. The lens should have at least a 100-400mm IS lens, and a detachable sun cover is useful in some areas. A tripod is a handy addition to birding when you are in one spot for an extended period, and can help to get better shots and reduce camera shake.

0 Comment ON "Where Are the Best Places for Bhutan Bird Watching?"