As 960 kilometers of it sits at 4,000 meters above sea level, the designers and engineers of this railway had to solve various difficulties in its construction. The three major challenges faced were the fragile ecosystem, the lack of oxygen and permafrost. Many foreign experts had thought that it was impossible for the Chinese to conquer these difficulties. However, a few years later, they were shocked at this man-made world wonder, and reputed it as a miracle in engineering.

Since its operation, the Qinghai-Tibet Railway has become one of the busiest railways in Asia. Millions of travelers flock to the Qinghai-Tibet Plateau to experience this great work on the snowfields. In order to help travelers know more about it, Tibettravel.org has collected abundant information about the highest railway in the world, including how the engineers overcame the challenges of its construction, where travelers can take a train to Lhasa, how to book train tickets to Tibet, what travelers can experience along the railroad, and the impacts of the railway, etc. The Qinghai-Tibet Railway is the first railroad to Tibet, linking Tibet with mainland China and ending Tibet’s history without rail.

Why did China build Railway to Tibet ?

"It is impossible to build a railway to Lhasa across the Kunlun Mountain Range", It was wrote by the modern railway travel expert Mr. Paul in his book "Travel around China".  In such a complex geological conditions , It was extremely difficult to build roads and rail tracks on the snowland. But the Chinese government determined to construct Tibet Railway since the great Chinese leader Mao Zedong sent a team to the Tibetan plateau to investigate the feasibility of constructing the railway in 1955. Since then, China was facing numerous difficulties and consuming half a century , and finally to build the fantastic railway to Lhasa.  Read More:  the Documentary of Building Qinghai-Tibet Railway

China Made the Engineering Miracle in the World

Both economic and geographic difficulties were encountered in the construction of this most elevated railroad. As is well known, such a feat of engineering must require huge investment, which was a big challenge for China at the time. But, the biggest challenges lay in the harsh geographic conditions on the high plateau. The fragile ecosystem on the Qinghai-Tibet Plateau, and also the lack of oxygen at the high-altitude, and the permafrost were major problems which made the construction of Qinghai-Tibet Railway specifically eventful.

Read More:
the Miracle of Human Construction in history -  the Qinghai Tibet Railway
Top 10 Statistics You do not know about Tibet Railway

Reputed as “the sky road”, the railway itself is a great wonder without doubt. Of course, the breathtaking scenery gives additional attraction to this charming rail-track.  Journey of  Qinghai Tibet Railway is extraordinary,exiting experience, especially the train climb up to Qinghai Tibet Pleatau from Xinning.  Do not miss any moment of extraordinary nature which you will watch trough the window of the train. This magic railway goes through the distant lofty mountains, green rivers, blue lakes green oasis and prairie...  changeable sky makes rain, snow, sun and incredible weather.

The train travel offers more possiblity to explore attractions along the railway, travelers can easily stop at any of Six Main Train Stations of Qinghai Tibet Railway to travel aroud, then continue the way to Tibet. Currently, seven cities from all directions in mainland China offer direct trains to Lhasa. They are Beijing in north Shanghai in east, Guangzhou in south, Chengdu and Chongqing in central, Xining and Lanzhou in west. But it does not indicate that you can board a train to Tibet only in these cities. Trains to Tibet pass through many important cities in China, like Nanjing, Zhengzhou, Xian, Changsha and Taiyuan. However, what is the best city to start train journey to Tibet, Qinghai Tibet Railway Map drews even railway lines from China to Tibet and also gives the most authoritative overall review of 7 major railway lines from China to Tibet.

As the travel flow of Qinghai Tibet Raiwaly grows increadibly annually, travelling through Qinghai Tibet Railway becomes increasingly popular, specially in peak seasons of Tibet tourism. Tourists have to book the train tickets months in advance through travel agencies. However, it is virtually impossible for individual tourist to book ticket on their own. In order to ensure that the trains run on the high plateau safely, and that passengers travel on-board comfortably, all the trains to Tibet are well-designed taking into account the conditions faced - high elevation, low temperature, lack of oxygen, harsh climate, etc. The biggest feature of Tibet Train is the Oxyen suppy system, travelling adove 4000m, the Oxygen supply is the key element to ensure passengers' comfort and safety. There are two oxygen-supply systems on each train. One is used for increasing the oxygen level in the train, by temperature and air pressure controlling systems, when the train enters into the plateau zone. The other is directly used by passengers through an independent port. There are oxygen supply tubes and private oxygen masks masks in each cabin for emergencies.

See More at Tibet Train - Traveling on the Highest Pleatau

If you are interested in any of the tourist destinations or have any question about Qinghai-Tibet train journey or travelling in Tibet, please feel free to send us an inquiry. We will do our best to help you out.

Maps of Qinghai Tibet Railway, Gives the most authoritative overall review of 7 major railway lines from China to Tibet. 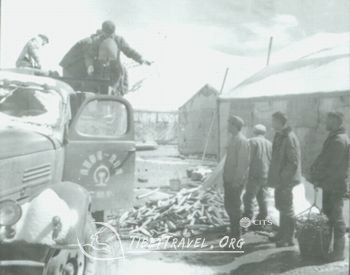 This is a brief history of Qinghai-Tibet Railway, starting from the initial plan to its full completion, an epic in the histroy of human construction. 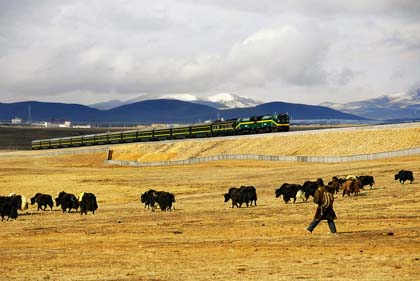 Breathtaking Scenery along the Qinghai-Tibet Railway

The sceneries along the Qinghai-Tibet Railway are marvellous and breathtakingly majestic, so most tourists to Lhasa prefer to travel to Tibet by train.

Top 10 Statistics You do not know about Tibet Railway

Several facts about Qinghai-Tibet Railway proves that the world's highest railway is a great wonder in the world. On the Qinghai-Tibet Railway, there are 90 stations from Xining to Lhasa and each station has unique scenery and only 9 of them have scenery-viewing platforms. However, the trains to Tibet do not stop at every station. The following are the major stations. 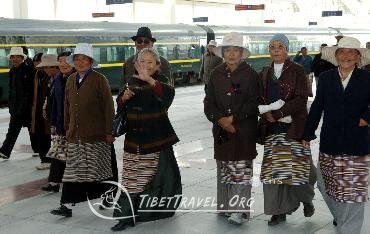 The Qinghai-Tibet Railway has boosted Tibet’s tourism and economy as well as its local economy and cultural communication with the outside world.

Both economic and geographic difficulties were the daunting challenge in the construction of the Qinghai-Tibet Railway. But, the biggest obstacles lay in the harsh geographic conditions on the high plateau.