From Beijing to Kathmandu, with 5000km distance, your choice is more than flying. Travelling on road from Beijing to Kathmandu is a classic overland tourist route. The surface adventure start from exploring the Forbidden City, Great Wall in Beijing, before taking the highest train in the world to Lhasa. Great Himalaya road adventure to Kathmandu begins after a two days full acclimatizing in Lhasa, you will travel through two historic cities Gyantse, Shigatse and make a detour to visit the highest mountain in the world – 8455m Everest. All the way to Kathmandu, you will be accompanied by Himalaya Range, holy lakes, glaciers, deep gorges, dense forests as well as kind local people. 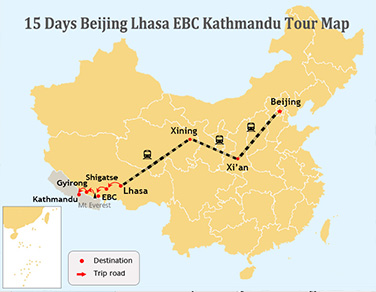 When international flight lands in Beijing, you will be pick up by private car to your reserved hotel. The rest of the day free for you to be on your own.

Today is guided tour to Forbidden City, Tiananmen Square, Summer Palace which are the traditional must-see places in Beijing. These attractions present to the visitors an image of how the ancient Chinese emperors manage the country, what their family life is, how they spent leisure time, how they sacrifice gods.

The Great Wall tour proves that China was one of the strongest country in its history. Stretching thousands of kilometers, the Great Wall protected the ancient Chinese against the invasion of the enemy from its north side for more than 1000 years, the Great Wall was listed as one of the world's eight wonders. Mutianyu Great Wall, featured “graceful”, enjoy the best quality among all Wall sections, 80km north-east of Beijing with 22 ancient watchtowers, about one every kilometer. (Cable car is optional if you do not want to walk)

The Xining to Lhasa Section of Tibet Train offers a stunning alpine scenery full of snow caped mountains, lakes, vast plateau plains littered with nomads, yaks, Tibetan antelope and many other wild life elements. Tibet Railway is the world’s highest Railway. The 1,956 kilometers rail line expands a vast highland area with an average altitude of 4,300 meters above sea level, the highest being 5,068 meters.

On Day 6, the train will move on Qinghai Tibet Plateau, You will pass by Yuzhufeng, which is the main peak of Kunlun Mountain, World Natural Heritage Kekexili Naturel Preserve, Tuotuo River-the resource of Yangtze River, Naqu Grassland and Cuona Lake. In the afternoon (maybe evening, according to the train schedule), the train will arrive in Lhasa. Tour guide will meet you at railway station.

The tour will begin from UNESCO World Heritage site - Potala Palace, which is also the winter palace of Dalai Lama. It's situated at 12,139 feet above sea level. It's a 13-story high building that contains over 1,000 rooms, various statues, stupas, murals and artifacts.Then continue to Jokhang Temple, another UNESCO World Heritage site. It’s a spiritual center for Buddhists in Tibet. Next to the temple there is Bakhor Street, filled with pilgrims and street vendors, selling traditional Tibetan items such as prayer wheels and jewelry.

In the morning, drive from Lhasa to Shigatse. On the way, drive over the Gampala pass (4790 m), and tourists will have a glimpse of Yamdrok-tso (4400m) .The Lake is surrounded by many snow-capped mountains and in the distance clients can have spectacular views of Holy Mount Nyenchen Khangsar, (7191m) the highest mountain near Lhasa .Gyantse was historically Tibet's third largest city (after Lhasa and Shigatse).In Gyantse, tourists will visit the famous Pelkor Monastery and Gyantse Kumbum. After one and a half driving, we arrive in Shigatse, which is the second largest city in Tibet. In Shigatse, tourists will visit Tashilunpo Monastery, the seat of Tibet's second highest incarnation, the Panchen Lama.

Drive to Lhatse, it is a small town where tourists can have lunch.Then, head to Shegar and if the weather is clear enough then on the way down to Shegar tourists will view the Mt. Everest in the distance. After 4 to 6 hours’ drive, tourists will arrive at Rongbuk Monastery but on the way, they will pass one of the highest Passes in Tibet (pang la pass height 5050m) from that’s pass they will view the whole five highest peaks in the world.

In the morning, if the weather is good, tourists can see the sun rise on the top of Mt Everest, after visiting the base camp, drive to Tongla pass to see the panoramic view of Himalaya mountain range. Then driving down to Kyilong, where is surrounded by forest with ice-capped mountain background. The altitude is 2600m at the border.

Day 12: Exit China through Kyilong Border(2600m), then drive to Kathmandu

In the morning, drive clients to the Sino-Nepal border - Kyilong, tour guide will assist clients to check out of the border. After going through the immigration, Nepalese driver will pick you up at the border and drive to Kathmandu. The road to Kathmandu is bumpy but the scenery is quite beautiful, you can see the deep gorges, rivers all through the way. the road condition is rough in Nepal so this 160km road takes a whole day.

Kathmandu’s Durbar Square is one of three durbar (royal palace) squares in the Kathmandu Valley. It is the site of the Hanuman Dhoka Palace Complex, which was the royal Nepalese residence until the 19th century and where important ceremonies taken place. Swayambhunath the golden spire of the 5th-century Swayambhu stupa is adorned with a colourful fluttering of prayer flags; it crowns a hill overlooking the Kathmandu Valley and offers fantastic views over the city of Kathmandu. the last site we visit for today is Patan City which is the second largest town in Kathmandu valley. Patan's central Durbar Square is entitled in the World Heritage Site and absolutely packed with temples, the Golden Temple which is the unique Buddhist Monastery was founded in the 12th century, is a large rectangular building has three roofs and a copper gilded facade with the images of Buddha and Avalokitesvara where there are Buddha images and illustrations on the walls.

Pashupatinath the most important Hindu temple in Nepal, the old buildings on the site were destroyed by Moslem invaders in the 14th century, its stone linga smashed to dust, but it rose again behind their retreating backs. Succeeding monarchs reinstated the temple and the images. Bouddhanath is among the largest stupas in South Asia, and it has become the focal point of Tibetan Buddhism in Nepal. The white mound looms thirty-six meters overhead. The stupa is located on the ancient trade route to Tibet, and Tibetan merchants rested and offered prayers here for many centuries. Bhaktapur Durbar Square is a conglomeration of pagoda and shikhara style temples grouped around a fifty-five window palace of brick and wood. The square is one of the most charming architectural showpieces of the Valley as it highlights the ancient arts of Nepal.

At the last day, the tour guide will see you off at Kahtmandu airport. End the epic tour.

* Pick up from hotel before the tour;
* Drop off to hotel after the tour finish
* All Entrance Fee of tourist attractions listed in the itineary
* One Dinner included in Lhasa
* Local English Speaking Tour guide
* AC comfortable tourist Vehicle
* Tibet border Kyilong to Kathmandu road transfer

* Qinghai Tibet Railway Hard-sleeper Train ticket from Xian to Lhasa
* As buying Train tickets is not as easy as buying air tickets, all domestic train will be included and booked by us in advance.

* All Hotels in the tour are included. We choosed best value 3 to 4 star hotels with good location for you. All hotels include breakfast. (You may book accommodation by yourself, the price can be deducted from the quotation)
* Accommodation at EBC is poor tent guesthouse.

* Besides the breakfast included in hotel and some meals listed in the day tours, meals are not included in price quotation.

* Some options might to be recommended to guests like Kongfu Show.
* Additional single supplement for requiring single room for yourself.
* Gratuities to tour guide and driver.
* Other personal expenses.

This tour connects three distinct areas - Beijing, Tibet and Nepal, and gives you a cultural feast.