Traveling to Tibet from Germany is an epic journey of more than 11,000 kilometers, and while many countries still do not have direct flights to China, from Germany there are direct flights to five different international airports across the country, including Beijing, Shanghai, and Hong Kong. There are also flights to Kathmandu, in Nepal, which run direct from Frankfurt and Munich.

As with most travelers to Tibet, tourists from Germany are required to book their tours through registered Tibet tour operators. Besides, independent travel is not permitted. All German tourists must obtain their Tibet Travel Permit, which is needed to get into Tibet and travel around the region. To our clients, we offer free Tibet permit service. Once your tour is booked with us, the permit will be applied for using photocopies of your passport and Chinese Entry Visa and a digital photo, which takes between 15 and 20 days, and will then be forwarded to your hotel in China.

Most Popular Tibet Tour from Germany

With a huge network of rails and roads, it is possible to extend your trip to one that can cover China, Tibet, and Nepal in one trip. After traveling around China, visiting your favorite sites and taking in the famous cities, you can then travel to the plateau and tour across Tibet. Covering the entire region, from Lhasa to the Nepali border, you can travel down into Nepal, to the Kathmandu Valley and the exotic Nepali capital, or head back to China for more adventure. Packages offer you the ideal tours that can cover all your needs in one, making your trip to Tibet even better.

How to Get to Tibet from Germany? Multiple ways to travel from Frankfurt to Tibet.

For German tourists, there are a number of ways to travel to cities in China such as Beijing, Shanghai, and Hong Kong, leaving from any of four major airports across Germany, and arriving at the destination cities in China, several of which coincide with the gateway departure cities for the Tibet trains. There are also flights to Kathmandu, which run direct from Munich and Frankfurt, which are a great way to get to Tibet for those wishing to travel overland to Lhasa. 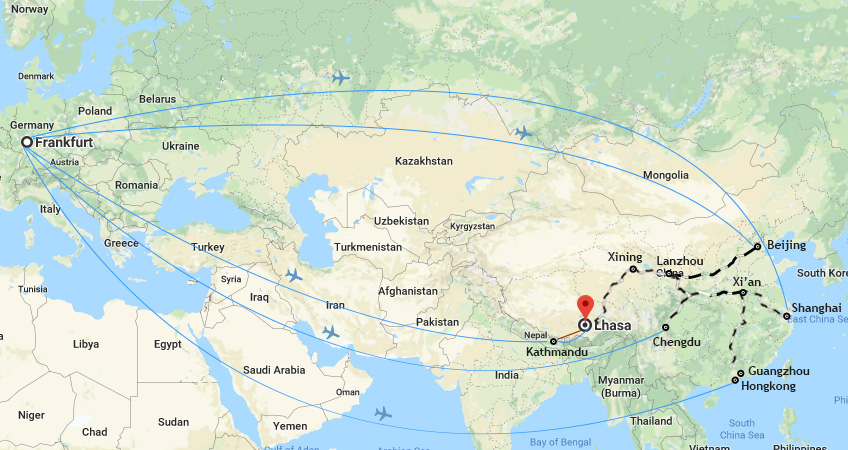 Flights to China from Germany are frequent, and can be found for a relatively good price using the many comparison websites available to get the best deal. The average flight times are:

By the time you arrive at your hotel in China, your Tibet Travel Permit will be waiting for you with the reception desk, and you will be ready to take the flight or train to Lhasa. In some extreme cases, our staff will give it to you in person at the airport or railway station. The permit is needed in order to board both train and flight, and the options for both are given below:

By the Epic Overland Tour from Kathmandu to Lhasa
Traveling overland from Kathmandu is an epic adventure that takes you across the Himalayas to the Tibetan Plateau, crossing the wide expanse of the region, through arid steppes, across vast green prairies, over high mountain passes, and alongside some of the region’s most holy lakes, shimmering in the sunlight. From Kathmandu, we suggest you using our tour vehicle and directly take you to Rasuwagadhi Fort on the Sino-Nepal border, from where you will walk across the bridge to Immigration control on the Chinese side. Once through immigration, your guide and driver will meet you and transfer you to Gyirong Town a short distance away to start your tour.