Travelling from Australia to Tibet is expected to have a long flight to mainland Chinese Cities (such as Beijing, Shanghai, Guangzhou, Chengdu, HK) or to Kathmandu, Nepal. Then after you get your Tibet Permit or Group Tourists Visa (in Nepal), you may take flight, Tibet train or enjoy the overland road trip to reach Lhasa. As a well-established Tibet tour operator in Lhasa and the best traveler’s choice on Tripadvisor, we offer you a variety of Tibet tours covering China, Tibet and Nepal. Check the adventurous Tibet tours and the useful Tibet travel guide for you.

To kindly remind you, according to the government’s policy, independent travel or backpacking is not available in Tibet. So, Australians, as with other international tourists, can only travel in Tibet by joining a tour organized by a legitimate local Tibet tour operator. To get your Tibet Permit, you firstly need to book our Tibet tour, and then send the scanned photos of your passport and Chinese visa page and your photos to us by email. After we get your Tibet Permit from Tibetan Tourism Bureau, we will immediately deliver it to your hotel in China by express.

Most Popular Tibet Tour from Australia

For thrill-seeking Australian tourists, so long as you have enough holiday and proper budget, you certainly won’t miss such rare chance to enjoy the classic tour all the way from Australia to China Tibet and Nepal. We handpick the most popular Tibet tours for you. Our one-stop service ensures your Tibet Permit and helps you book Tibet train journey, flight ticket, hotels, etc. to facilitate your Australia to Tibet tour.

How to Get to Tibet from Australia? Multiple ways to travel from Sydney to Tibet.

Travelling from Australia to Tibet has multiple ways and is pretty easy. Firstly you need to fly from Sydney to mainland Chinese cities or Kathmandu. Then change flight, enjoy Tibetan train or overland road trip to Lhasa, Tibet. You may follow the useful guide below to plan your journey. 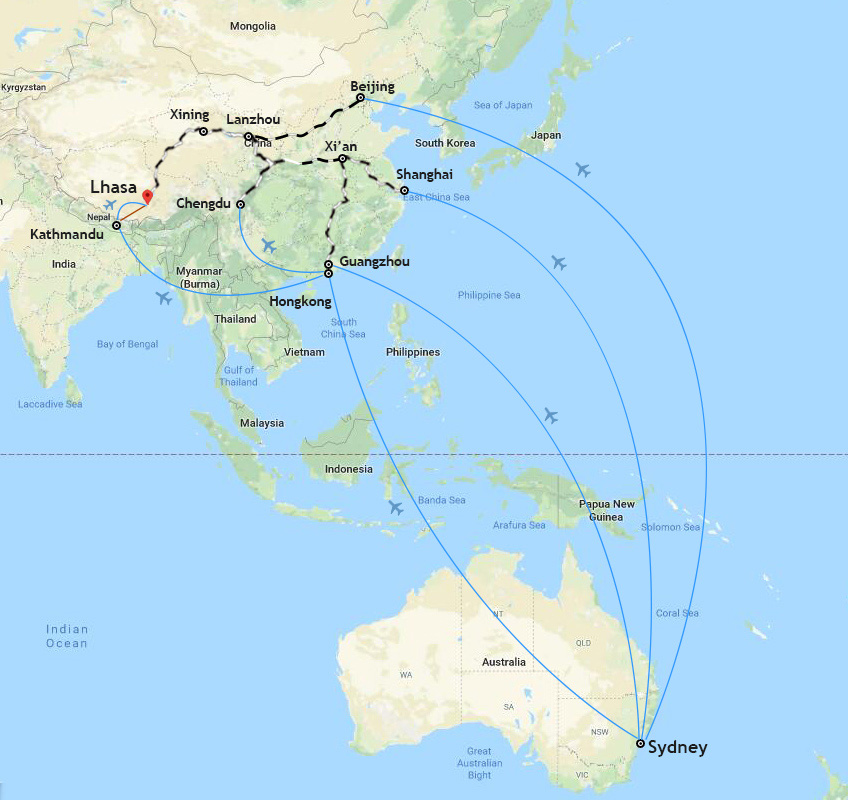 Flying from Sydney to China is your first step for reaching Tibet. Do check online and book your flight tickets as early as possible for the cheap flight ticket. You can easily fly from Sydney to major Chinese gateway cities like Beijing, Shanghai, Guangzhou, Chengdu, and HK.

Shortly after we get your Tibet Permit from Tibet Tourism Bureau in Lhasa, we will have it delivered to your hotel in China by express. So, after you get it, you are on your way to board the Tibet train or flight to Tibet.

By train
Beijing to Lhasa train (No.Z21) is the hottest train route in China. It saves you lots of money than taking flight and gives you enough time for acclimatization and lifetime experience on world’s highest train. The train departs at 20:00 and it takes 40:20h to reach Lhasa. The soft sleeper ticket costs 1144 CNY and hard sleeper costs 720 CNY.

By flight
As one of the major air hubs linking Tibet to the outside world, Shanghai is an excellent jumping-off point for Lhasa. However, there is not non-stop flight to Lhasa. The direct flight would make a stopover in Chengdu and Xi’an for 1h20m. Air China, Tibet Airlines, Shenzhen Airlines run the flight. The flight takes off at 16:50, and flies around 7h25m to reach Lhasa on the next day. The flight ticket is around 534USD.

By train
Z164 (return Z166), Shanghai-Lhasa train, travels westward from coastal Shanghai. The 4373km train ride takes passengers to travel across 8 provincial cities before reaching Lhasa. The Shanghai-Lhasa train departs at 20:10 and arrives in Lhasa at 18:25, with a total duration of 46h15m. The soft sleeper ticket is 1262.5 CNY while hard sleeper is 793.5CNY.

By flight
Normally flights from Guangzhou to Lhasa will make a stopover in Chongqing (55m). The flight takes off at 08:25 and after 6h15m’s flight you will land in Lhasa Gonggar Airport at 14:40. The flight ticket is around 396USD. You have many choices from flight run by China Southern Airlines, China Express Airlines and China Eastern Airlines and Air China, Sichuan Airlines Tibet Airlines, etc.

By train
Z264 (return train Z266), Guangzhou-Lhasa train, boasts the longest Tibet train in China. For the railfan, it would be your fantasy. The long ride stretches 4980km and gives you a panoramic view of the terrain of mainland China. The train departs at 11:45 and arrives in Lhasa at 16:19 after a walloping 52h34m’s ride. The soft sleeper ticket costs 1468¥ and hard sleeper is 865¥. The lengthy journey might be a challenge for kids and the elderly.

Since there is no non-stop flight or Tibet train connecting HK with Lhasa, you need to fly from HK to Chengdu and then change flight or take Chengdu-Lhasa train to reach Lhasa. The flight from HK to Chengdu takes around 2h55m. HongKong Airlines, Sichuan Airlines, and Air China, etc operate non-stop flight from HK to Chengdu. The flight ticket is around 421USD. After you arrive in Chengdu, things become much easier. Taking Chengdu-Lhasa flight, it takes 2h35m and fight ticket is around 221USD. For Chengdu-Lhasa train(Z322), it departs at 21:37 and arrives in Lhasa at 09:55 after 36h18m’s ride. The soft sleeper ticket is 997.5 CNY and hard sleeper is 627.5 CNY. If you have time, you can visit your travel consultant in Chengdu office.

Travel Tips: The exact amount of flight or Train prices are best confirmed by the airline or Tibet train you book.

The only international flight that flies to Lhasa is from Kathmandu, largely due to the closeness of Nepal and Tibet. You may either to fly from Sydney to Kathmandu and later keep fly to Lhasa or reach Lhasa from other mainland Chinese cities. It all depends on your personal preference and at your convenience.

Sydney to Kathmandu (Duration: up to 21h8m, with 1 stop in KUL, DOH, BKK, AUH)
Further into Tibet from Kathmandu

Currently, only Sichuan Airline and Air China have non-stop flights traveling from Kathmandu to Lhasa and vice versa. It takes 1h25m to reach Lhasa from Kathmandu. Flights are available on a daily basis, either by taking Sichuan Airline or Air China. The exact ticket price varies, depending on different travel seasons. During winter season from November to March, you the best bargain. From April to October, the price is much higher at around 418 USD. To enter Tibet from Kathmandu, you need to get Group Tourist Visa (3-day processing) and Tibet Permit, you travel consultant will help you get them. Do prepare for it as early as possible. Besides, while flying to Lhasa, sitting on the window seat of on the left side of the plane gives you the best vantage for Himalayan view, esp. Mount Everest.

To fully explore the true beauty of Nepal and Tibet and experience the exotic culture, enjoying the overland road trip definitely outweighs easy flight. Our staff in Kathmandu will help you get Group Tourist Visa while staff in Lhasa will get your Tibet Permit. After you get your Group Tourist Visa, you can take bus from Kathmandu to the customs at Gyirong Port (at 10:00 Beijing Time), current Sino-Nepal border, and our Tibetan guide will be expecting you on the other side of customs with your Tibet Permit and later gradually transfer you to Lhasa.

Having said so much, if you have more questions concerning the your actual travel from Travel from Australia to Tibet or specific preferences of your upcoming Tibet tours, please feel free to send us your inquiry and contact our professional travel consultants for Free Consultancy.

If you are planning to enjoy a trip to Tibet from Australia, yet have no ideas of how to sort it out the details, no worries! We would like to hear your tour plan and offer free professional consultancy and viable solutions. Please feel free to contact us.