Trekking in Tibet: things to know before your Tibet trekking tour

Trekking in Tibet is a perfect way to explore Tibet and the wonderful experience of a lifetime that you cannot get anywhere else on earth. While trekking in Tibet, you can enjoy the unique scenery in some of the most remote places of Tibet and get a great insight into Tibetan culture.

Types of Trekking in Tibet

Tibet trekking can be classified into Tibet pilgrimage trek, Tibet culture trekking and sightseeing trek. For instance, the Mount Kailash Trek is a typical pilgrimage trekking tour in Tibet. For some trekkers, it is also a huge challenge to trek at over 4,000 meters above sea level. A Tibet hiking tour requires good fitness, excellent preparation, and perseverance. Tibet trekking is not always feasible from December to March as the temperature can get very low and the days become much shorter.

Pilgrimage treks are normally located around the ancient Buddhist pilgrimage sites in Tibet, such as the trek from Ganden Monastery to Samye Monastery and the astounding Mount Kailash Kora. Both of these, as well as many others, follow the routes that have been used by pilgrims in Tibet for more than a thousand years. 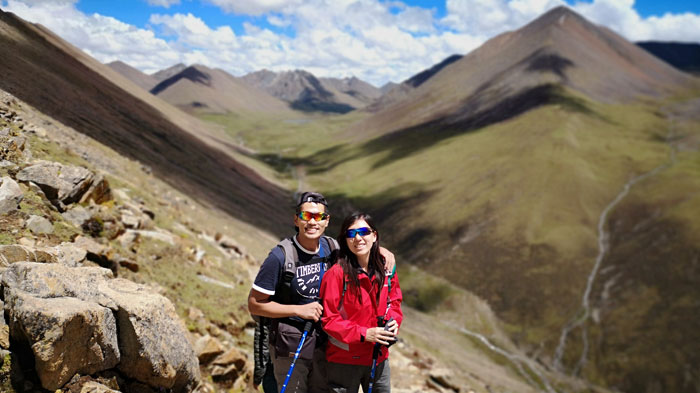 Enjoying the trek from Ganden to Samye.

Pilgrimage is the traditional form of a ritual journey that is undertaken by devout Buddhist Tibetans in search of spiritual significance in their beliefs. Sites for pilgrimage often place previously visited by Buddha or one of the many ancient sages and masters of Tibetan Buddhism, such as Padmasambhava, known in Tibet and Bhutan as Guru Rinpoche. They can also be places associated with certain Buddhist traditions and events, as well as sacred places that are known to have been associated with Buddhism in some sacred and spiritual way, such as the sacred Jokhang Temple in Lhasa and the Heavenly Lake Namtso.

The Kailash Kora is the prime example of pilgrimage in Tibet. A strange yet beautiful pyramid-shaped mountain of unusual black rock, Mount Kailash in Ngari Prefecture is renowned in four religions as being sacred, and is noted for being the earthly representation of the legendary Mount Meru, the mountain at the center of the universe. Pilgrims from all four religions – Hinduism, Buddhism, Jainism, and Bonpo – head for the mountain at specific times every year in accordance with their own religious beliefs to perform the ritual kora pilgrimage around the mountain. For a trekker, this route normally takes three days, but for many Tibetan Buddhists, they circumambulate the mountain in one single day, accumulating merits for their journey towards true enlightenment.

Tibetan cultural treks are normally done in such places where the ancient Tibetan culture is most well entrenched. Places that are of major significance in Tibet are often the best places to learn about and understand the unique culture of the Tibetan people, often by spending time interacting with the people of the small villages and settlements in areas of cultural significance. These small settlements are often imbued with a rich and devout Tibetan Buddhist culture that has remained the same for centuries.

The trek from Shalu Monastery to the Nartang Monastery, to the west of Shigatse City, is a prime example of cultural trekking. Starting from one of the most important monasteries in the area, the trek takes you through many small villages and hamlets, where the people have changed very little in their way of life since the monasteries were built in the 11th and 12th centuries. 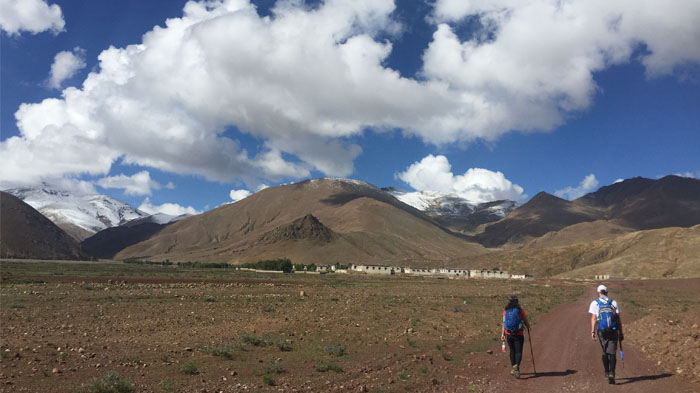 Our clients were enjoying their Shalu to Nartang trekking tour.

The trek from Tsurphu to Yangpachen is a similar route that takes you from the ancient Tsurphu Monastery north of Lhasa to the famous Yangpachen Monastery, close to the most popular hot springs in Tibet. This trek follows a route that takes you across grasslands of the Tibetan nomads, with their black yak-wool tents and unique way of life, as well as visiting some of the local monasteries that have had a major influence on the culture of Tibet over the past 1,300 years.

The simplest and often easiest type of trekking in Tibet, sightseeing treks take you to some of the most amazing natural and man-made sites on the plateau, and give you the best opportunities to get the most amazing photos you can possibly imagine. The sightseeing trek is all about the view and the vista, and focuses on the scenery and landscapes along the trekking trails.

The trek from Damxung County to Lake Namtso is a prime example of this style of trekking, focusing on the stunning vies as you cross the pass in the Nyenchen Tanglha Mountains, and get the first glimpse of the Heavenly Lake below you. The Everest Base Camp Trek, which runs for around 70 kilometers from Old Tingri to EBC, is one of the most stunning sightseeing treks in the world, giving you an ever-increasing view of the world’s highest mountain as you get nearer day by day. 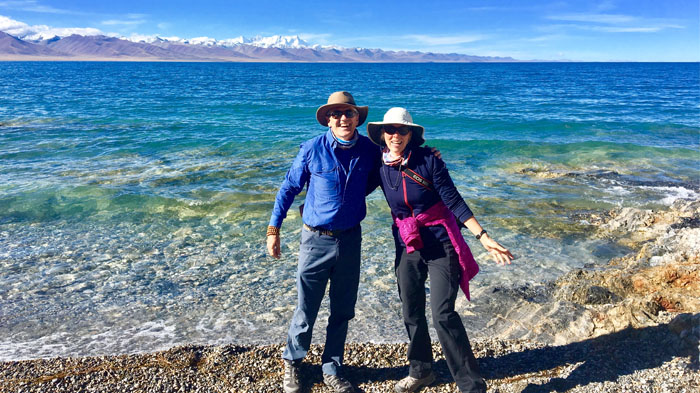 The stunning Namtso lake attracts thousands of tourists every year.

Best Time for Trekking in Tibet

Generally, from April to October is the best season to take a Tibet trekking tour. But it really depends on your route and a normal winter Tibet tour schedule is quite comfortable, because in winter, the tourist rush is lower and you can enjoy the beautiful scenery freely. Spring is one of the ideal times for trekking, from April to May, when the skies are clear and there is little rain to hamper your daily trekking. Similarly, autumn has a good climate for trekking, also with clear skies and little rain, as well as having the added advantage that it is often a little warmer than spring.

And even in the summer and winter, you can trek in Tibet. Most of the treks can be done in the summer months, as the small amount of rain that does fall usually is in the evenings and overnight. It is also warmer, with high temperatures of up to 22 degrees, which makes trekking a real pleasure. In Winter, from December to March, there are treks that can be done in the milder and lower areas of the plateau, and as long as you are not expecting to trek around Mount Kailash, then winter is a good time for the shorter local treks in Lhasa.

Tibet Travel Permit for all Trekking in Tibet

No matter where you are going in Tibet, you will need to have the ever-present Tibet Travel Permit. Required to both enter Tibet and travel around the region, the Tibet Travel Permit is only issued by the Tibet Tourism Bureau in Lhasa once you have booked a pre-arranged tour with a registered tour operator. Once your tour is booked, we will make the application for the permit on your behalf, using scanned color copies of your passport and Chinese Entry Visa. The process can take up to 15-20 days, and once complete, the permit will be sent to your hotel in China.

The Alien’s Travel Permit is the required permit for all travelers that are traveling in Tibet outside the region of Lhasa, known as the “unopened” areas of Tibet. The permit is applied for by your tour guide once you reach Lhasa, and requires the guide to have your original passport and Tibet Travel Permit, and is usually done while you are sightseeing around the city. Processing takes just an hour or so, and often even less, and once approved, you are then able to travel outside Lhasa to other areas, such as Mount Everest, Shigatse, etc.

The Military Permit, officially known as the “Restricted Areas Permit”, is required for all travelers that are heading for some of the more sensitive areas of Tibet, where travel can be very restricted. For those trekking at Mount Kailash, you will need to have the permit before you leave Lhasa, and this is also processed by us once you have booked your tour.

Similar to the Tibet Travel Permit, the Military Permit must be applied for at least 20 days in advance of your trip, as it can take a while to process. The application is made using the Tibet Travel Permit and your passport and visa copies with the Public Security Bureau (PSB) in Lhasa, who will then issue the permit for your travel only to the areas listed in your itinerary with us.

Trekking in Tibet is one of the most amazing adventures on the plateau, and with more high-altitude treks than anywhere else, Tibet is one place where you can be guaranteed that you will get the best out of your high-altitude trekking tour. Even at the lowest altitudes, you will still be trekking at elevations well above what is normal for trekkers outside the Himalayas, and with such a wide range of treks and trekking styles to choose from, you will be spoiled for choice. 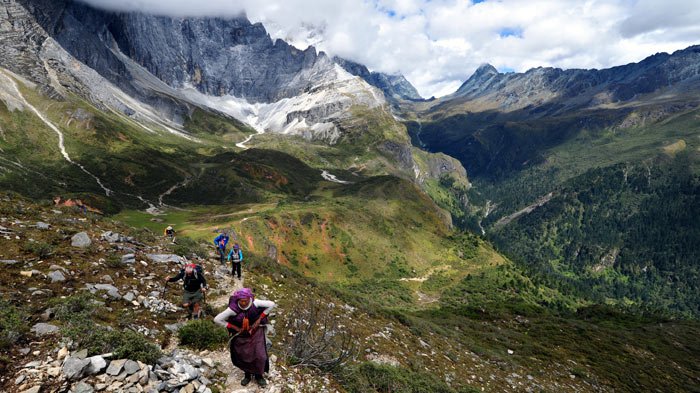 Trekking in Tibet would be an unforgettable experience.

0 Comment ON "Trekking in Tibet: things to know before your Tibet trekking tour"