Motuo, isolated in Eastern Tibet, as the only county with no highway link to the outside world among all of China's 2,100 counties, is the last county where the Brahmaputra River crosses over in China before it flows to India. As the remotest county in the southeastern part of Tibet, Motuo is located on the southern slope of the Himalayas. Covering an area of 30,550 square kilometers, the mysterious Motuo County is mainly inhabited by the Menba and Luoba ethnic groups with a population of about 10,000.

According to the Tibetan Buddhist scripture "Bka'gyur", Motuo, or "hidden lotus" in Tibetan, is Tibet's purest and holiest region. As a result, most of the local people, mainly of the Menba minority, are descendants of people who migrated from other places in Tibet more than one hundred years ago. 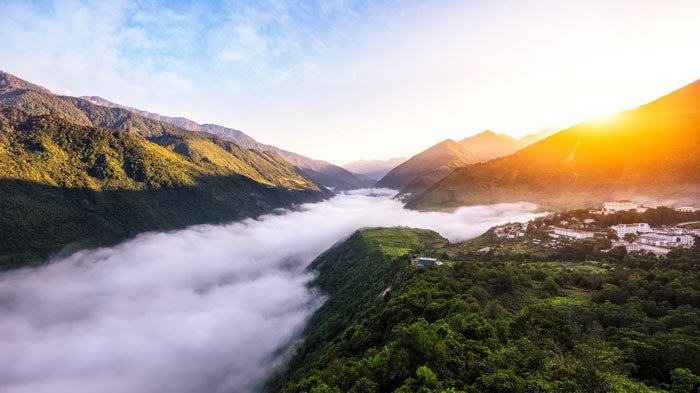 Although it is hard to imagine that one can enjoy tropical fruits such as bananas and pineapples in the snow-capped mountains, this is really the case in Motuo. Situated in the lower reach of the Brahmaputra River, Motuo boasts a typical sub-tropical moist climate, which brings plenty of rainfall and spring-like days all year round. Meanwhile, standing 1,000 meters above the sea level on average, Motuo remains separated from the outside world by a halo of snow-capped mountains around it.

Motuo State Natural Reserve is located in canyons at an average altitude of 750 to 4,800 meters, and is home to numerous waterfalls and rivers as well as rich flora from tropical to cold-weather plants. As one-tenth of China's plant species can been found in Motuo, it has been dubbed the "Natural Museum of Tibet" or "Tibetan Botanical Garden". Plants from both frigid and subtropical zones are compatible and coexist on this small isolated "island".

Pai Village, known as the springboard of the harsh trek to Motuo (Metok), the remotest county in southeast Tibet and currently the only county in China inaccessible by modern vehicles. Located on the southern slope of the Himalayas, Motuo is regarded as the "Lotus Holy Land" to the Tibetan Buddhists.

Nestled in between Nangaba Mountain and the Yarlung Tsangpo River, Pai Village is the transfer station of supplies to Motuo. The route from Pai to Motuo is considered one of most classic hiking routes in China. The reasons are obvious: from November to June, the mountain pathways are covered with ice and snow; from June to September, it's the raining season when slipping, landslides, mud-rock flows and leeches are common; Only in October is the weather suitable for hiking. Even though it is now still in the rainy season, we decided to go, despite that it rained and snowed just last week.

Traditionally, the trip from Pai to Motuo takes four days. For hikers from outside, it has to be four days – since there are only four stopovers during the whole trip. 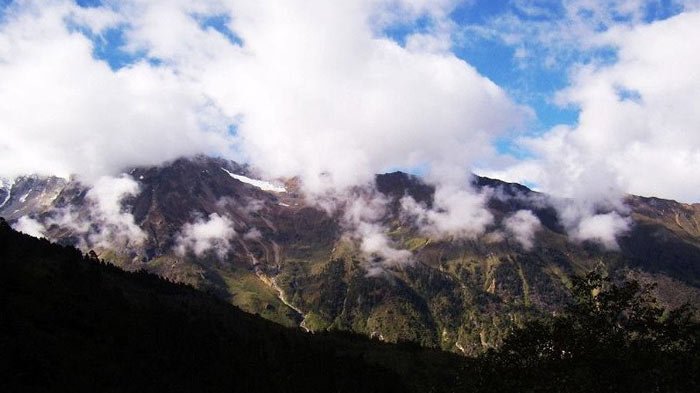 Trek to Motuo From Pai to Lage

The first stopover, "Lage," means a village at the foot of a snow mountain. The boss is from Sichuan. Built over a black pool, the hostel is quite shabby though it is said to have just been decorated. There are 50-centimeter-long supporting wood frames in between the hostel and the pool. Water for daily use is from a nearby brook. Because there is no pump, so water is led directly into the hostel by natural fall. In the house, there is nothing but a hearth for cooking, which we used as stove for heating. It is an isolated place with no connection to the outside world, only the simplest accommodation and food you can imagine.

I was still running a fever, so I took off my wet clothes and went to bed early. The so-called bed is actually several wood blocks with a bumpy surface. The partitions of the house are also wood blocks, which are too vulnerable to resist winds from any direction. But the advantage was that I could see that the thick forest was a step away from the house, and a white waterfall hung in the middle of the forest.

At dusk time, frogs began to rush down from the top of the woods, creeping to the window of our wooded house. The whole pine tree wood was immersed in a light blue mist. It was so freezing cold that I was awakened several times. The high fever never let go of me at that night and I could hear snoring as well as the sound of the flowing water.

Motuo, our final destination, is situated in the lower reach of the Yarlung Tsangpo River. Surrounded by clouds and mist, we could see lofty peaks and steep ravines in this untouched land. Numerous birds sang in the forest; sunshine poured through the mist and woods. Water vapor, formed from the India Ocean and Bangladesh Bay, floated; surrounding the lofty peaks all year round. Azaleas and orchids abound; large white lilies blossom in vast fields. 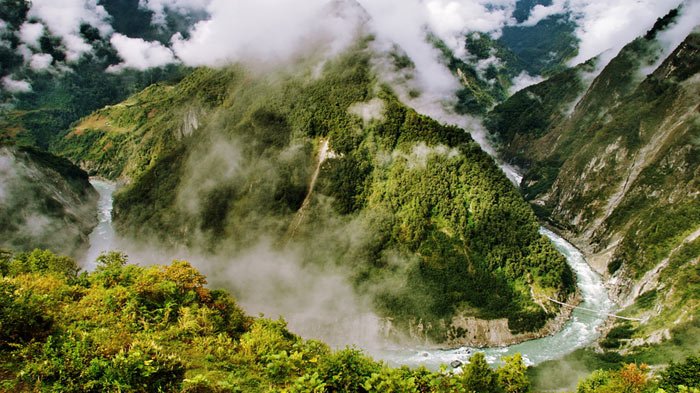 Stunning natural landscape at the hidden lotus in eastern Tibet.

In times past, aborigines like the Menba and Luoba ethnic groups were referred to as "wild communities," who had little communication with outside. Till now, some remote villages remain mysterious. Local people respect the nature in this idyllic reserve. Mystery and serenity is bestowed upon this land and its residents' pure, simple and powerful hearts.

I used to wonder why the local people don't leave such a harsh place and why it keeps drawing hoards of returning tourists. The two days in Motuo, when we gazed at the landscape, when I think of the unparalleled view during the trip and the people we have encountered, I have gradually got the answer.

According to officials from the Tibetan Autonomous Region, Motuo will have highways by 2012, marking the end of the only county in China without highways. The highway project was started in 2009, and a key project, the Galongla tunnel, was completed on Dec 15, 2010.

Though Motuo is very buautiful, it is close to foreign visitors, other parts of Eastern Tibet can be visited, you can see Eastern Tibet Tours in Tibet.