Your Guide to Tibetan People and Cultural Life

Lying at the high-altitude Qinghai-Tibet Plateau, is Tibet Autonomous Region, the westernmost part of China. Once an ancient Empire that ruled lands as far east as Chengdu, the Tibetan people have evolved to be the perfect inhabitants of this high-altitude plateau. Uniquely developed to survive, and indeed thrive, in this harsh environment, the hardy Tibetan people have lived for thousands of year in virtual seclusion, deliberately cut off from the western world.

Unique in their religious beliefs and culture, Tibetans are a devout people with a rich life in the pursuit of true enlightenment. While life can be harsh on the plateau, the Tibetan people have managed to find ways to survive that include the cultivation of a hardy highland barley and the domestication of the ever-present yaks, which roam the plains and prairies in herds, looked after by their nomadic herders.

Tibetans are an ethnic group of people that are native to Tibet, a region of China on the high-altitude Qinghai-Tibet Plateau in the far west of China. Believed to be descended from the ancient Qiang people, a name given to various groups of people that have lived in the general area of ancient western China for thousands of years before the Chinese Dynasties, the Tibetan people are among those that traditionally spoke a form of Tibeto-Burman languages. 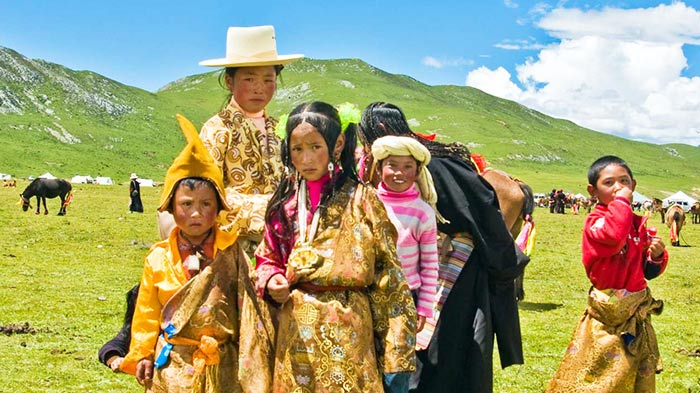 Tibetans are native to Tibet

Modern Tibetans use a form of Sino-Tibetan languages, of which there are more than a dozen different dialects. It is widely believed that the modern Tibetan people are descended from the Zang tribes around 15,000 years ago, and may have combined with even earlier human residents of the plateau around 11,000 years ago, when the Sherpa people diverged from the Tibetans. However, in Tibetan mythology, it is believed that the people were born out of the marriage of the monkey, Pha trelgen Changchup Sempa and the rock ogress, Ma Drag Sinmo.

Tibetans are a hugely devout people, with a strong belief in the Buddhist faith. This Buddhist religion, which was brought to Tibet in around the 7th century, has integrated into the ancient Tibetan culture, to become a unique cultural religion that is found only on the plateau area of Tibet, Sichuan, Qinghai, and Yunnan Provinces.

The Tibetan people are warm and hospitable, with a friendly, outgoing nature and the ability to laugh in the face of hardship. Not only have the people managed to survive in the extremely harsh environment of the Tibetan plateau, they have thrived in it, and have even built a huge empire that once expanded into what is now major parts of China. 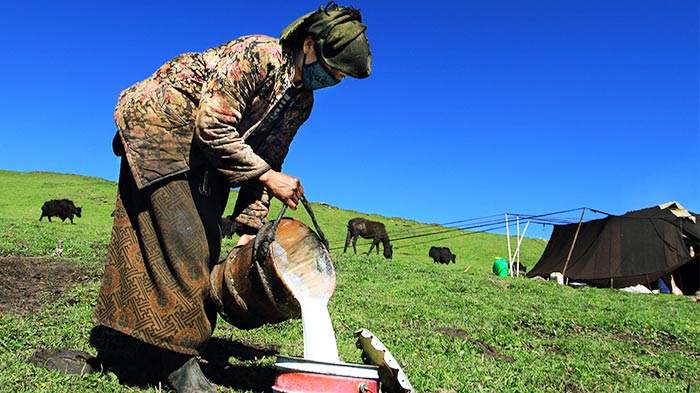 Traditionally, Tibetans are mainly a nomadic people, living on the grasslands and prairies of the plateau in large tents known as yurts, following the green pastures with their livestock as the seasons change. In other parts of the plateau, wooden and stone houses, covered in Buddhist symbols and decorated with bright colors can be found, a testament to the ancient Tibetan Empire brought about by the Tibetan king, Trisong Detsen.

Typical Tibetan dress is very unique, and well adapted to the arid, desolate landscape and the harsh climate of the plateau. Normally made of silk, wool, sheepskin, and cotton, the styles vary with the seasons and the weather, with looser clothing in the warmer summer, and layers of heat-retaining clothes in the depths of the harsh Tibetan winter. 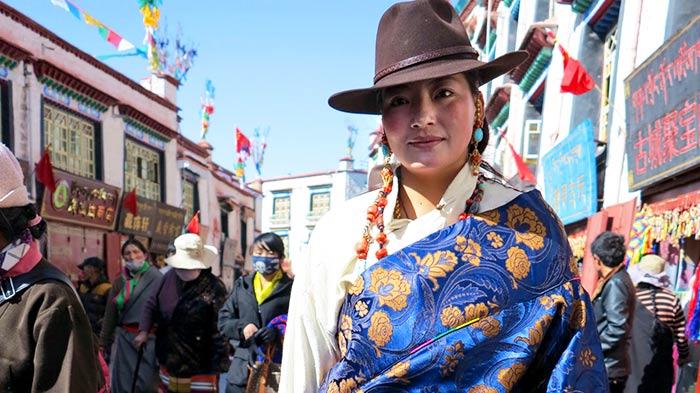 For men, the costumes are loose-fitting and bold in design, with colorful garments and strong, leather boots, while for the women, the clothing is loose and elegant, allowing them to move gracefully, and with bold colorful patterns to the fabric. Shirt or dress sleeves are traditionally a lot longer than their arms, and become more noticeable when they dance, with the ends of the sleeves flailing around them in intricate patterns.

With very limited arable land suitable for agriculture, subsistence agriculture is the primary form of farming. Livestock such as sheep, yaks, and goats are the main type of farming, and the farmers are nomadic, traveling across the plains with their herds, following the lush grass to get the best grazing for their animals. The movement across the plains is a natural form of environmental farming, allowing pastures that have been used to rest and regain their fertility before being used again in later years. 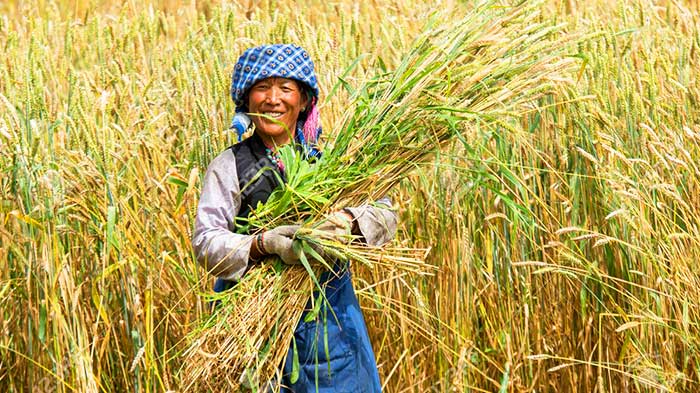 Arable farmland only accounts for around two percent of the total area of Tibet, and supplies the grains essential for everyday life on the plateau. In this fragile environment, hardy crops are needed, as even the lowest arable lands in the east of Tibet are much higher than the highest farmlands in other countries. Rotation of crops, fallow periods, and crop mixing allow the farmers to maintain a sustainable arable farming system in a limited growing season.

In Tibet, trade has been a major industry for thousands of years, from the days of the ancient Tea Horse Road and the Salt Trade Route to more modern types of trading. Evidence exists of Tibetan trade since before the 7th century, both on and off the plateau region, and the export of raw materials such as salt, borax, herbs, and gemstones has been going on between Tibet and Nepal, India, and inland China for over 1,500 years. Exports were traditionally traded for items that could not be produced on the plateau, such as silk, paper, ink, tea, and iron and steel products. And many food items are traded under agreements with Nepal and India.

In Tibetan Buddhism, a pilgrimage is a life-changing journey that one takes to seek out enlightenment, often in some sacred place such as a temple or holy mountain. The Tibetan word for pilgrim is “gnas skor ba”, or “one who circles a sacred place”, and the kora, a religious circling of a sacred site, is a major part of the pilgrim’s journey. This rite performed at the end of the journey is what defines the pilgrimage. Many pilgrims travel to the place of worship on foot, and some by prostration, though it is not a requirement. One can travel on horseback or by car, as long as one performs the ritual kora on foot only. In Tibetan Buddhism, it is believed that the merit accrued by performing the kora is less if done on horseback than when done walking. 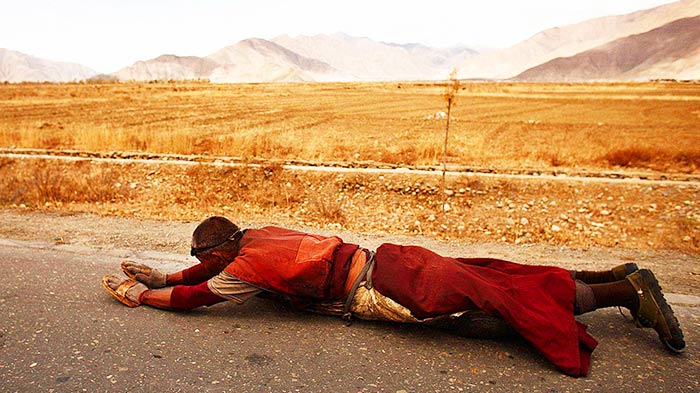 Ancient Tibetan Buddhists would make the long journeys to India, to receive teaching of Buddhism and to visit the sacred Buddhist sites. Nepal has also long been a place of pilgrimage for Tibetan Buddhists, in such places as the Boudhanath stupa and Lumbini, the sacred birthplace of Siddhartha Gautama, the first Buddha, in 623BC.

In Tibet, pilgrimage sites include the famous Jokhang Temple in Lhasa, one of the oldest Buddhist sites in Tibet that dates back to the 7th century, and the sacred Mount Kailash in Ngari Prefecture of western Tibet, which is believed to be Mount Meru, the center of the universe, in Hinduism, Buddhism, Jainism, and Bon. Jokhang Temple has long been the favored pilgrimage destination of Tibetans traveling to Lhasa, to pray in prostration before the gates of the temple and perform the holy kora around the temple, which follows the path of the famed Barkhor Street, the center of shopping in Lhasa, with hundreds of vendors selling almost anything you could imagine from Tibet.

Tibetan Idea of Death and Reincarnation

Death and reincarnation hold significant importance in Tibetan Buddhism, and the Tibetan people all believe devoutly that they will one day achieve enlightenment and rise to a higher plane of existence. Tibetan Buddhists believe that there are two kinds of reincarnation. The first is the involuntary incarnation, where karma holds sway and draws you back to a new life, often caused by destructive desires and emotions.

The second is by voluntary means, where through the power of prayer and compassion that has benefit to others, they can choose the time and place of their rebirth, as well as choosing who their parents will be. People known as “tulkus” do this second form of reincarnation, and for over 900 years, the people have believed that a realized soul can choose the circumstances of their rebirth in order to best benefit mankind and ensure continuity of their spiritual journey to true enlightenment.

The most famous reincarnations in Tibet are those of the highest ranking Lama, the head of Tibetan Buddhism, and the Panchen Lama, Tibet’s second highest incarnate. Both of these religious figureheads have been reincarnated several times, and each time one dies, signs are read to determine the location of the rebirth of the Lama. Once located, they are taken into the monasteries to begin their journey to becoming the Lama.

The roles of men and women in Tibetan society has been a stable one for thousands of years, with the women taking care of the home and their husbands, and looking after the children, cooking, and doing minor work in the fields and nomadic villages. The men take a more dominant role in this ancient patriarchal society, working with the livestock or crops to provide for their families. While there have been some changes in the roles of women in modern Tibetan society, this is still subject to certain expected roles, and the main role of women being set in stone. Women can inherit property in Tibet, unlike in many countries where they have fewer rights and domesticated roles. However, when the woman gets married, her status reverts to that of the wife, and the role is lessened.

One thing that should be remembered in Tibetan society, though, is that women have an inordinate amount of power within the family unit. In families that practice polyandry, which is still legal in Tibet, the woman’s task is that of balancing the family, and her multiple husbands. With multiple husbands, the woman can choose who she wants the father of her baby to be, or she can decide not to name anyone, to keep the family peaceful and remove possible jealously between the husbands. In the modern Tibetan women, while they often still take on the role of wife once they are married, while younger, they are less subservient to men, and more open in voicing their opinions of things in everyday life, and trying to improve the status of women in Tibetan life.

0 Comment ON "Your Guide to Tibetan People and Cultural Life "