The severe conditions that often imperil survival on the towering Tibetan Plateau have helped for it unique culture, along with its close ties with the Central Plains. Tibetan literature not only reflects the life, thoughts, and esthetics of different levels at various phases in Tibetan history, but also provides an important reference for the study of the Tibetan language and origin of words, social history, religion and belief, morality and behavior, the spiritual world, as well as local conditions and customs. The developing process of Tibetan literature appears to have the following characteristics: 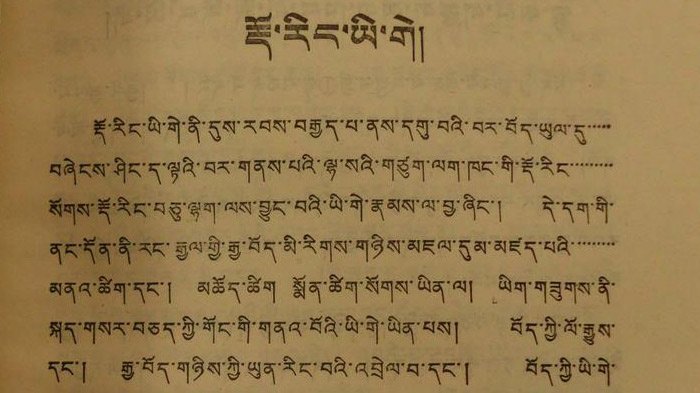 Tibetan folklore and authorial literature provide living pictures of Tibetan life and development at various stages in history. They include the following:

The mythic stories of the important figures and issues in primitive and later feudal society, including the Song of Siba Butchering Cows, the Biographiesof Tsampo Kings, the Story of Songtsan Gambo Greeting Princess Wencheng, as well as the rare Tibetan literary works unearthed at Dunhuang, the Records of the Banya Monastery, etc.

The works reflect the days when several kingdoms thrived. The birth of a number of works handed down from ancient times, including the Collected Works of Manyi and the Five Volumes of Biography that mainly described the social history and culture of the Tubo Kingdom; the Songs of Milha Raba that focused on Buddhist teachings; the Sagya's Mottoes targeted at learning, pursuit of politics and the ways getting along with others; and especially the Biography of King Gesar, the epic ballad about a national hero, helped Tibetan literature to spring into full flower.

The literature of history, biography and drama was especially outstanding, such as the works that focused on feudal serfdom, indicating a new breakthrough either in terms of content or in writing techniques. A General Record of Tibetan Kings and A Feast of Scholars are supreme examples of history-themed literary works, and the Biography of Milha Raba leads in biographical literature. The dramatic eight major Tibetan opera items are still popular today.

River novels started to appear in literary writings that reflected the late feudal serfdom, such as the representative Xunnu Darma and Zhengwan Darwa.

After the establishment of new China, especially in late 1978, when the Central Government introduced the reform and opening-up program, Tibetan literature achieved much; Tibetan and Chinese literary works developed equally, authorial literature and folk literature ran side by side, literary writing and criticism made simultaneous progress, and poetry, the novel, prose, drama, movies as well as quyi (Chinese folk art forms including ballad singing, story telling, comic dialogues, clapper talk, cross talk, etc.) bloomed at the same time. The achievement of novel was especially eye-catching.

2. Folklore and Authorial Literature Promote Each Other

The folklore and authorial literature were the two necessary wings of Tibetan literature. Among the folklore, the great epic Biography of King Gesar was known publicly as the culmination of Tibetan literature and a masterpiece among world literary works. It was also a encyclopedia for researching Tibetan social life, national history, economic culture, class relations, national intercourse, ideology, morality, customs and habits, as well as religion and belief.

Tibetan authorial literary writing has enjoyed a long history, with abundant works, unique style, skillful practice, a profound base and wide influence, based on its strong roots in folklore. There were a lot of authorial works that took the reference of folklore, for instance, the Songs of Milha Raba based on Tibetan folk songs, A General Record of Tibetan Kings, Annotated Book on Tibetan Kings and A Feast of Scholars injected with such fables as how the macaque became human, as well as the stories about Princess Wencheng and Princess Jincheng, the tale of building the Jokhang Monastery, etc; the Love Songs of Cangyang Gyaico and the eight major Tibetan opera items handed down through the generations Prince Norsang, Princess Wencheng, Girl Namsa, Baima Wenba, Denyu Toinzhu, Zholwa Sangmo, Sugyi Nyima and Trimai Gundain adopted all materials from historical tales, folk tales and sutras.

3. Art, History and Philosophy Proceed Side by Side

Over quite a long period, Tibet had no the concept of literature in today's sense of the word, so it had relatively few pure literary works. These were generally a fusion of history and philosophy, such as the Biographies of Tubo Kings found in Dunbhuang, the historical works like Records of Bamya Monastery, Collected Works of Manyi, Five Volumes of Biography, biographical works like Biography of Marba, Biography of Riqoinba, Biography of Riqoinba, Biography of Tongdong Gyibo, Biography of Pholhanas, and gnomic verses like Sagya's Mottoes, Sayings of Gedain, Mottoes on Water and Trees and How the King Cultivates His Personal Virtues. These deeply influential works handed down from ancient times were not pure literature in the literal sense, but were recorded in Tibetan literary history due to their literary grace, splendid rhetoric, lively plots and their mix deal of folk songs, proverbs and folk stories related to the seeking of Tao (The Way).

Given the long history of Tibetan Buddhism and the implementation of a combined religious and temporal administrative system, in addition to some writers either being religious followers or even eminent monks, Tibetan literature, especially authorial literary works, contains a strong religious imprint. Some works were originally drawn from Buddhist tales. 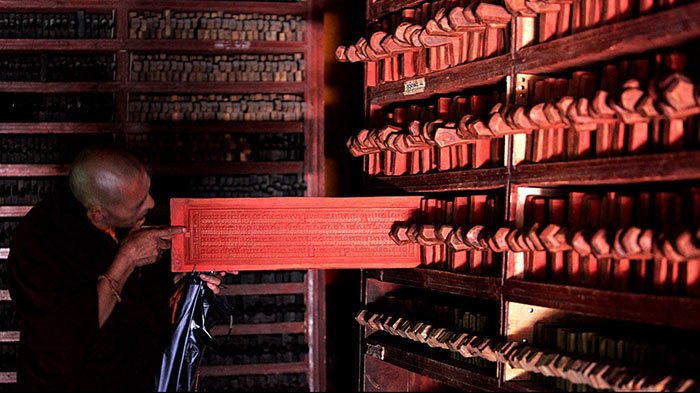 Iron certificate bearing golden words in Pagba script, reading: ¡°Relying on the imperial edict issued by the emperor and blessed with the strength bestowed by the Heaven, the certificate holder would punish whoever disobey. This is a certificate the Yuan emperor issued to leader of the Sagya Sect.

5. Learn From Each Other and Develop Step by Step

Tibet has been dealing with various ethnic groups in inland China and the surrounding areas in politics, economy and culture since ancient times. During the Tubo Kingdom in the 7th century A.D., the language scholar Tomi Sangbozha invented the Tibetan script according to the characteristics of Tibetan language, after investigating several kinds of Indian scripts.

Soon after, some Tibetan scholars successfully translated Canons of Yao and Shun-Book of History, Military Strategy of the Warring States and some famous articles forming part of the scriptures of Han Chinese Buddhism into Tibetan script. In the early 13th century, the great Tibetan scholar Gonggar Gyaincain introduced into Tibet the Indian rhetorical masterpiece Mirror of Rhetoric. Later, on the strong call of Pagba, it was fully translated into Tibetan script. Hence, Tibetan scholars studied and applied it, popularizing the study of good articles and use of carefully-considered rhetoric for a certain period of time. The successful works were the History of Kings and Ministers of the 5th Dalai Lama and the Youth Darma of Cering Wanggyia.

After the establishment of the People’s Republic of China in 1949, communication between the Tibetan races and other ethnic groups were increasing. The four famous classical Chinese novels, Water Margin, Three Kingdoms, A Pilgrimage to the West and A Dream of Red Mansions, were completely or partially translated into Tibetan. Other world-renowned works were also translated in succession. Meanwhile, Tibetan literary masterpieces, either classical or modern, were translated into Chinese, English, French, German, Japanese, Russian, Hungarian, Czech and other languages, which aroused great interest among readers of different races and nations, enabling Tibetan literature to make further progress.