The Modernization of Tibetan Language

Since the creation of Tibetan scripts during the period of Songtsen Gampo (617-650) in the 7th Century, Tibetan language has been widely applied across Tibetan inhabited areas. However, in traditional Tibetan society, Tibetan language study was conducted in monasteries and the education mainly focused on clergymen and the upper classes. Only a few people had the opportunity to study and use Tibetan written language, which was mainly used for government documents, legal documents and regulations, and more often than not, used by religious people to practice and reflect the basic contents and ideology of Buddhism and Bon religion. 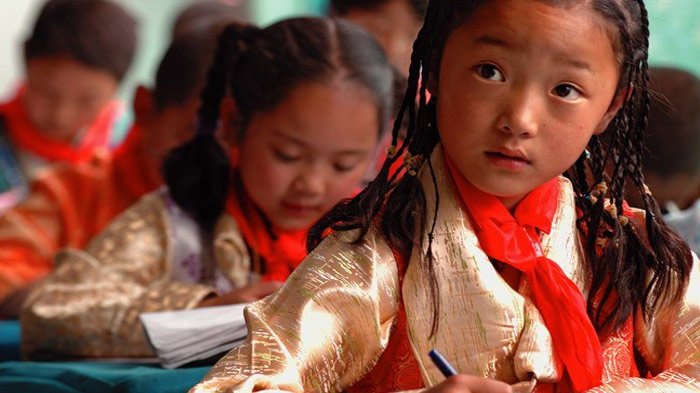 A group of students are learning Tibetan language.

Since the founding of New China, social changes in Tibetan inhabited area have offered Tibetan language an unprecedented opportunity to expand. A substantial transformation has taken place in the education of most Tibetans and the succession of the language, the capacity of its semantic features and the extent of the application of the language.

In China's Tibet and the four provinces (Sichuan,Yunnan,Qinghai and Gansu) inhabited by ethnic Tibetans, Tibetan language has entered into the curriculum of universities, secondary technical schools, middle schools and primary schools at all levels. Such initiatives demonstrate that Tibetan language study has escaped the monopoly of the monasteries and become popular amongst the mass of the population.

The Succession of Tibetan Language

The Capacity of Tibetan Semantic Features

Since the 1980s, special Tibetan language institutes have been established from provincial to township level in Tibet and the four Tibetan inhabited provinces. A professional staff is working on Tibetan language translations in order to expand its literature and function. These institutions have successfully created a number of terminologies in natural and social sciences. These new terminologies have been classified into different categories and compiled into cross-language dictionaries, including a Tibetan-Chinese Dictionary, a Han-Tibetan Dictionary, and a Tibetan-Chinese-English Dictionary.

The Extent of Tibet Language Application

Apart from translation of some well-known literary works, such as Water Margin, Pilgrimage to the West, The Story of the Stone, The Arabian Nights, The Making of Hero, and The Old Man and the Sea, translators have produced thousands of contemporary books on politics, economics, technology, movies and Tele-scripts in Tibetan. While successfully accomplishing this information exchange, the application of Tibetan language to the other areas has also been extended.

The advanced media is also extending the areas where written Tibetan language is applied. In comparison with the past, the number of Tibetan newspapers and periodicals has dramatically increased on one hand, and on the other what these newspapers record and reflect are mostly new ideology and new phenomena, primarily about life and the secular world.

Along with the advancement of broadcasting in Tibetan inhabited areas, a number of Tibetan programs are going to air, such as news, science programs, the stories of King Gesar, songs and comic dialogue. These not only cover the Tibetan inhabited areas of China, but also broadcast to other countries such as Nepal and India where many overseas Tibetans can watch.