Tibetan carpet or rug is famous all over the world. Some tourists travelling to Tibet would purchage Tibetan carpet as souvenir. Tibet has a long history of making rugs from Tibetan highland sheep's wool, called changpel. Tibetan rugs are used for many purposes ranging from flooring to wall hanging to horse saddles, though the most common use is as a seating carpet. Tibetan carpets mainly include “sadian” (carpet for covering floors) and “kadian” (puff, a plush mat for coving cushions). 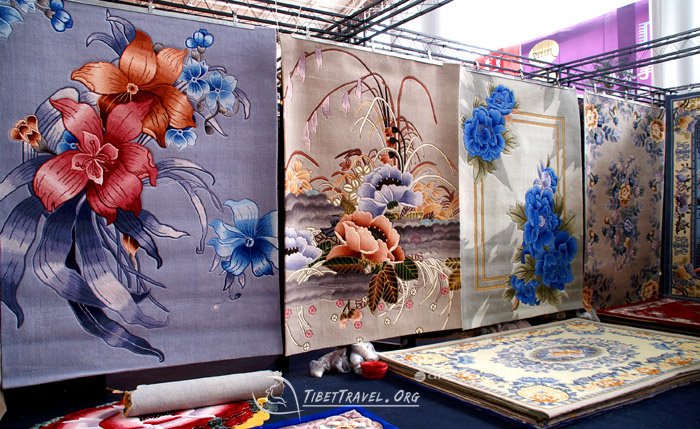 The history of making carpet making in Tibet stretches back hundreds if not thousands of years, yet as a lowly craft, it was not mentioned in early writings, aside from occasional references to the rugs owned by prominent religious figures. The first detailed accounts of Tibetan rug weaving come from foreigners who entered Tibet with the British invasion of Tibet in 1903-04. The knotting method used in Tibetan rugmaking is different from that used in other rug making traditions worldwide. Some aspects of the rug making have been supplanted by cheaper machines in recent times, especially yarn spinning and trimming of the pile after weaving. However, some carpets are still made by hand. The Tibetan diaspora in India and Nepal have established a thriving business in rug making. In Nepal the rug business is one of the largest industries in the country and there are many rug exporters. Tibet also has weaving workshops, but the export side of the industry is relatively undeveloped compared with Nepal and India. Tibetan carpet is weaved with bright and harmonious colors that will last very long. The soft, delicate and durable carpet has high value of appreciation and collection for its national feature of design.

In Lhasa, rug stores cater to both to local, national, and international tourists. Dark red Turkish imitations from factories in Qinghai are sold alongside other Chinese rugs and even silk carpets with Middle-eastern designs. Amongst local Tibetans, replicas of traditional Tibetan designs from machine-woven polyester are popular inexpensive alternatives to hand-made carpets.