The Most Beloved Food and Beverage in Tibet

Travellers look for different things, when they visit a place. Food is one of the most important things among that and the cuisine makes a place even more appealing. Tibetan cuisine is unique and the geography of the place and the neighbouring countries influence it greatly. From noodles and cheese to butter and soups, Tibetan food is absolutely wonderful. Travellers will love the taste of the various dishes and there are some amazing restaurants, which offer good service and mouth-watering preparations. Various grains are used as Tibet’s staple food and barley is quite common. Dairy products along with milk are almost indispensable and people consume them quite often. Tibet doesn’t produce rice in huge amounts, so it comes from the imports. The southern region witnesses some rice cultivation, but it is not sufficient to feed the entire region.

How does the unique topography of Tibet influence its agriculture and lifestyle?

Agriculture heavily depends on the climate and this is same for Tibet as well. The extreme high altitude makes it difficult to cultivate vegetables and fresh fruits, so we have resorted to other products. We locals formed our cuisine, based on the available things and this shaped our lifestyle. When the winter becomes extreme, survival is extremely tough and agriculture almost comes to a standstill. Tibetan cuisine is different from other regions, though it is delicious and nutritious. Modern agricultural procedures are now slowly being introduced and this has changed the condition massively. Greenhouses were constructed and many crops were grown inside them. Tibetan vegetative conditions show a great deal of variation, so the cuisine is not the same throughout. 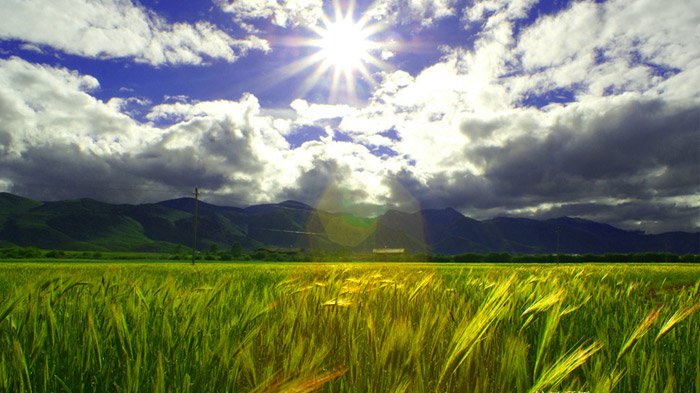 In the high hilly areas, Tibetan crops can’t be grown and they are cultivated in the low regions. Barley’s importance is huge in Tibet. It is not only easy to grow, it is widely acceptable too. Tsampa and Sha Phaley are eaten by most people and Balep is perfect for breakfast as well as lunch. Dinners can be delicious too, as Tibetans prefer Thukpa at that time. This item is extremely delicious and it is extremely healthy too. Thukpa is prepared by mixing meat, vegetables and different varieties of noodles and forming a soup. There is a lot to learn from the Tibetan lifestyle and our attention to detail is amazing. We take each job seriously and show our unique culture in the littlest of things.Bamboo chopsticks are used to serve the cuisine in Tibet. This is different from that of Himalayan cuisine, as that is eaten by hand.

Tsampa is Tibet’s staple item and this nutty-tasting foodstuff is prepared from delicious roasted barley. This item is extremely unique and exclusive to Tibet. The grain has deep roots in Tibetan culture and the locals are often refereed as tsampa-eaters. A food item can be used to represent the people of a place and that is exactly what has happened here. 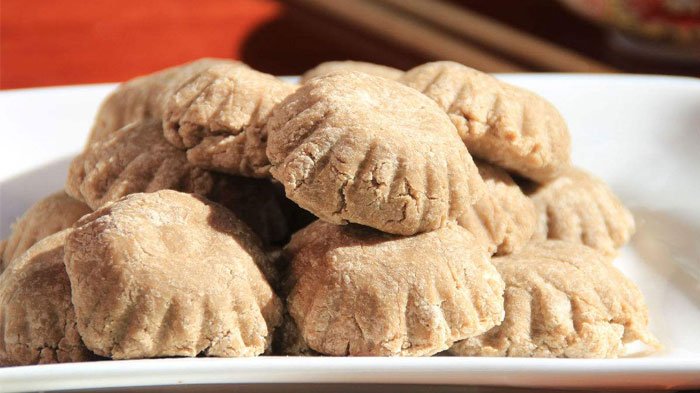 Main Ingredients: Roasted flour is the main ingredient and wheat flour is also used at times. The entire mixture is often blended with Tibet’s butter tea, which is a bit salty in nature.

Making of Tsampa: Tibetans prefer food, which are very convenient to make. The preparation process is quite simple and nomads as well as travelers eat it a lot. Traditionally tea is one of the main ingredients, but now beer and water is also used. Initially, a bowl needs to be taken and buttered tea is kept at the very bottom. A sufficient amount of tsampa is dropped on it and then the mixture is stirred well. A dumpling-like paste is formed and that it is washed down with more tea. The preparation poses many challenges and dexterity needs to be shown. Moreover, to make it delicious, practical experience is a must. Perfection comes slowly, as the things need to be mixed in right proportions.

Cultural significance of Tsampa: Apart from being a major role in Tibet’s diet, the religious significance of tsampa is also noteworthy. Some Buddhist rituals involve throwing of tsampa, as an offering to gods. The food item got intermingled with Tibet’s culture and it denotes joy and ecstatic celebrations. Tsampa is widely used during the New Year and it brings good luck to everyone. In Buddhist funerals, tsampa-throwing occurs and it helps in releasing the dead person’s soul.

In the snowy lands of Tibet, barley wine or Chang can keep you warm. This alcoholic beverage is famous here and it’s widely consumed in the neighboring communities as well.

Main Ingredients: This relative of the world famous beer are brewed with the help of barley, millet and rice grains.

Making of Chang: The millet seeds are stuffed inside a barrel in semi-fermented condition and then hot water is poured on to it. A narrow bamboo tube known as pipsing is used to let the water pass. As this boiled barley cools down, yeast is added and the mixture is kept for 2-3 days to intensify the fermentation. The fermentation ends after the given time frame and water is again added to make it ready for drinking.

Usage of Chang: In Tibet’s social structure, Chang is often given to guests to welcome them. They are used in religious occasions too. Chang has a great cultural significance and it is often used a tool to settle disputes. In the liquor market of the world, Tibet has made its contribution by introducing ‘Lhasa Beer’. Lhasa Brewing Company convinced international investors and increased networks to make this product famous.

Yak is domesticated in many areas of Tibet and yak butter is obtained from the female species. This staple product is imported outside and herding communities use it frequently. Not only butter, but a lot of other dairy products are prepared from Yak’s milk. 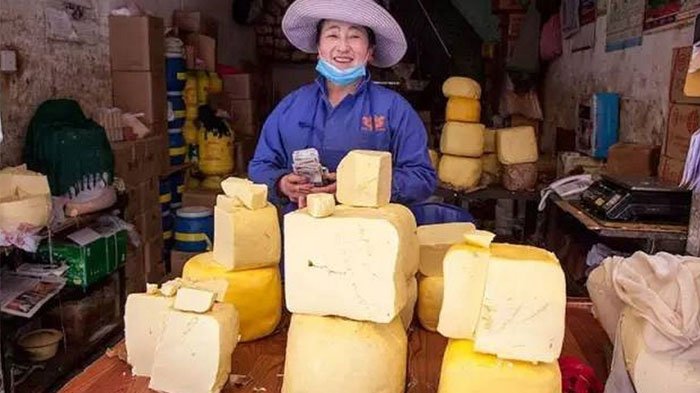 Main Ingredients: Prepared from Yak’s milk, this butter is also used in a special variety of Tibetan tea. In the scenic mountain pastures yak’s milk is converted into butter and it has a great market value.

Making of Yak Butter: Individual yaks don’t produce a sufficient amount of milk and this is why large herds are useful. Milk is obtained in huge amounts in summer, as compared to winter. The milk is left for fermentation for a night and then the resulting substance is churned. In winter, the accumulated yoghurt is laid on a sheep’s stomach and a butter form is formed.

Cultural Significance of Yak Butter: Yak butter supplements tsampa and they are eaten together. Apart from dominating the diet in a major way, Yak’s butter has become an indispensable part of Tibet’s culture and religious practices. The prayer wheels are lubricated by using it and the lamps use it as a fuel. Moreover, in the butter lamp festival, the lamps make use of this product to remain illuminated. Sculptures made of butter flower are absolutely stunning and they are sold in many exhibitions in Tibet.

Any kind of yoghurt is delicious, but Tibetan yoghurt is extremely delicious. Tourists can taste this delicious item, when they come here and treat their delicate taste buds. 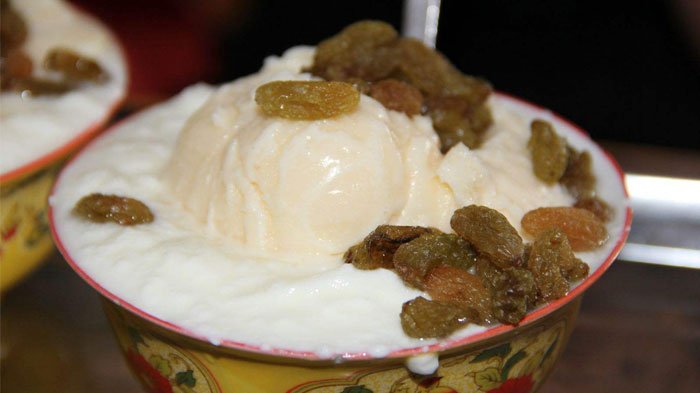 Main Ingredients: Instead of cow milk, yak’s milk is used to prepare this yoghurt. The butterfat content is higher in this milk, so this yoghurt becomes extremely creamy.

Making of Tibetan Yoghurt: Yak’s precious milk is taken and it is boiled in the initial stage. Then it is left for cooling and the fermentation process begins. The flavor is extremely strong and people love it for the taste. Tibetan yoghurt is available in every cities and this desert is extremely famous.

Cultural Significance of Tibetan Yoghurt: Tibetan’s eat yoghurt in the Shoton festival and it is an old tradition. Yoghurt festival is celebrated widely and tourists can taste the amazing delicacy by visiting Tibet.

Tibetans are greatly enthusiastic about the food and they love experimenting new things. Explore the amazing picturesque region of Tibet and get mesmerized by the amazing dishes.

0 Comment ON "The Most Beloved Food and Beverage in Tibet "