Tibetan New Year or Losar is the most important traditional festival for Tibetans and starts from Dec, 29th on Tibetan calendar, and the entire celebration is expected to last for 15 days, while most of the festivities will take place in the first 3 days. 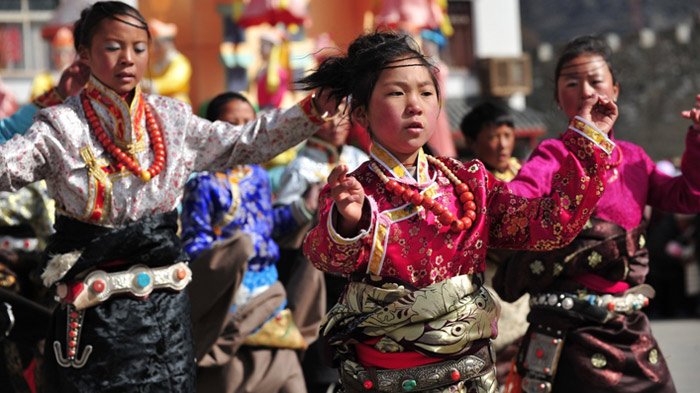 On the evening of the 29th, all family members will sit around the table, and eat Guthuk , a kind of dumpling, in which some small pebbles, wool, charcoal, or hot chili, with different implications, may be jokingly stuffed, for examples wool symbolizes good-heartedness; while charcoal represents meanness; chili means speak harshly; wool stands for kind-heartedness; coin will bring prosperity and fortune. During eating, the moment when the stuffing is spit out will always trigger spells of laughing.

Making Guthuk is a traditional custom in New Year festival.

Afterwards all people will go out to take part in a ceremony called expelling ghosts. A magnificent scene soon appears in the whole city: a few persons carrying big bowls of ghost-food are rushing in front, while a large number of people holding torches and running behind them are yelling to get rid of evil spirits from their houses, until they arrive at a big campfire, where they then smash the bowls and throw them into the fire. 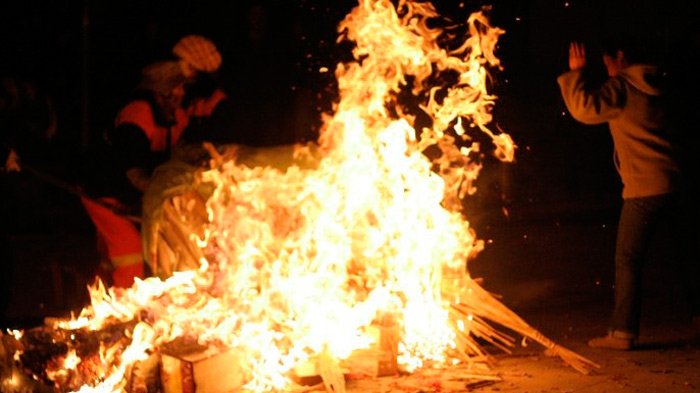 In addition, on the day of Tibetan New Year Tibetans will replace the old “Fragrant Curtain” with the new one on the door and window. Next, Every household will clean the family shrine and furniture, and even whitewash their courtyard walls. They will also decorate auspicious markings with tsampa flour on the central wall of the cleaned kitchen, or on the floor in front of the gate. 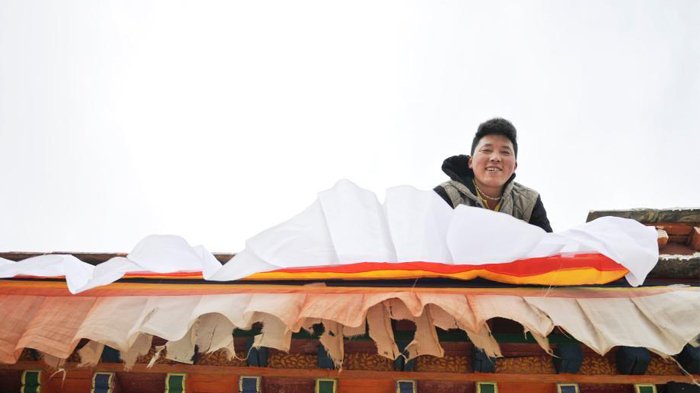 Every family begins to fry a kind of doughnut made of butter and flour called 'karsai' in various shapes. They will also prepare offerings for the deities, e.g. tsampa, barley grains, horse-beans, wild ginseng, barley ears, cockscomb flowers and the Sun & Moon tablets, all being placed in a multi-colored wooden container called Qemar. Then, the housewife will be busy cooking food like Tibetan yak, sheep and pigs for the festival.

Cultural Tips:
“Fragrant Curtain” (also known as Xiangbu in Chinese) is a frequently-seen decoration hanging on the door or window of Tibetan buildings. It is made with colorful silk, with white, red, blue, and yellow colors. Traditionally, the fragrant curtain is changed once a year for peace and auspicious beginning.

On the first day of the New Year, Tibetans only celebrate it with their family in their house. However, different neighbors living in the same yard can visit each other with auspicious Qemar. They will splash Tibetan barley from Qemar to neighbors’ house and exchange Hada, drink Tibetan Chhaang or Lhasa beer and sing songs and go dancing. 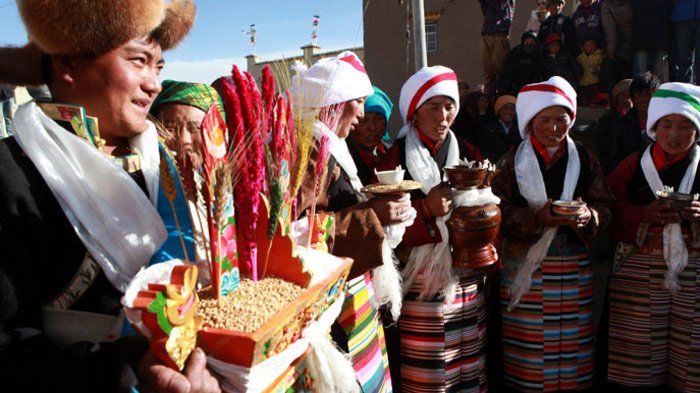 Tibetans will visit neighbors in the first day of new year with Qemar.

On the other hand, the housewife will get up early in the morning and make tea and changkol and churn butter tea and prepare droma dresil, Tibetan sweet rice. After all the meals are done, they will rush to the riverside or well to get the “First Water of the Year”.

It‘s believed that he who gets the first water of the new year will be exempt from all misfortunes. Later, they will carry the water home and put them before the shrine and burn the incense and light butter lamp to pray for peace of the New Year.

After the daybreak, the housewife will awake children, and get them dressed with new clothes. Later, children will exchange New Year’s greeting with the elderly. Words like “Tashi Delek”, which means auspicious and all the best, are the most common way of greeting during Tibetan New Year.

Cultural Tips:
The way Tibetans eat Qemar follows certain patterns: firstly, use thumb and index finger to take a small amount of Tsampa and throw it high above the air. After they repeat the same movement for three times, then they will put Tsampa into their mouth.

On the second day, relatives and friends will visit each other with the New Year's greeting, i.e. “ Tashi Delek”. And normally the host will offer guests with Qemar and later chat with them in the house. It’s also the day when folk artists begin to perform.

The best-known performance will be the “Vbrasdkar Dancing”. Performers will wear a white mask and take a wood stick on their hands. They entertain audience with impromptu singing and dancing. Many believe that by watching and getting involved in their performance, people will get blessings and good luck in the whole New Year. 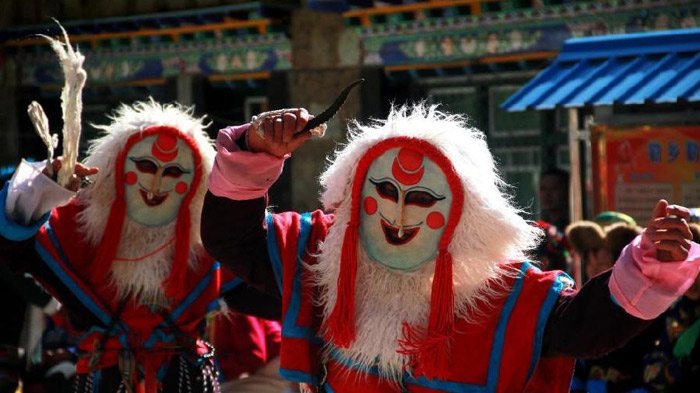 On the third, people will flock to Bumpari Hill in the eastern suburbs and Chakpori hill in the western suburbs to bun pine and cypress branches or other herbs, erect the prayer flag mast and hang the multi-colored flags praying for the mountain and river god's blessing. Burning pine tree branches (also known as Weisang) is a time-honored tradition for Tibetan New Year. 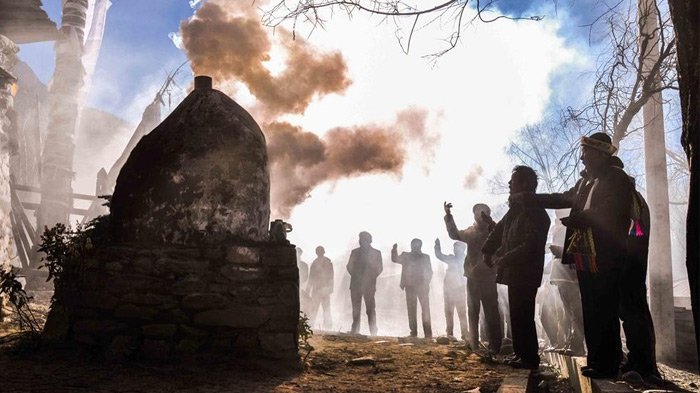 “Wei” means simmer in Chinese. 'Sang' is a Tibetan 'ritual fireworks'. It is said that the fragrance in the smoke produced during burning the pine trees and cypresses, can not only bathe unlucky and dirty things of ordinary people, but also aromatize the palace of mountain god who will be pleased after smelling the aroma. Therefore, Tibetan people pray for New year, good fortune, bumper harvest, peace and prosperity by this way. 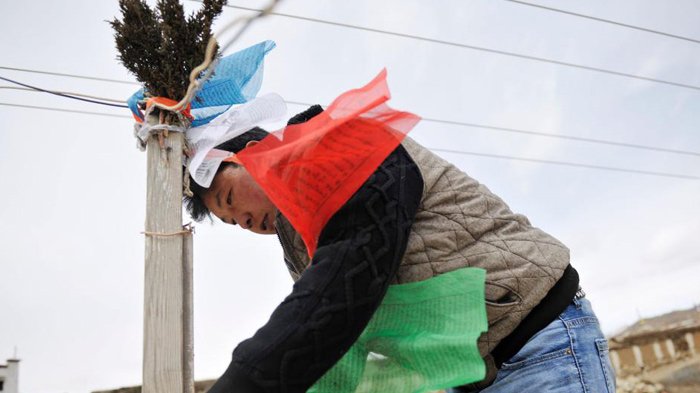 Tibetans are hanging Tibetan prayer flags on the rooftop to greet new year.

The colors of the prayer flags must be arranged in sequence of blue, white, red, green and yellow from the top down because different colors stands for different things, the blue for sky, white for clouds, red for flame, green for water and yellow for soil.

During the festival, Lhasa is overflowing with songs and dances, shaken by exploding sounds of firecrackers and cloaked with the joyful atmosphere, while the festival atmosphere in other regions is similar to that of Lhasa. However, there are some variations in scheduling.

For example, in the Tsang region centered by Shigatse, the people will worship the God of Land and the guarding deities on the second New Years' Day. They will burn cypress branches and pole the prayer flags on the flat roofs of their own houses to worship the deities on the third day.

In Amdo region, people will climb to mountaintop to burn the cypress branches for deities on the New Year's Day and then visit the aged of the village with New Year's greetings.

In other places, like the Gongbo area, the New Year begins on the first day of the tenth Tibetan lunar month. On New Year's Eve, before having their dinner, people would let a dog, as a foreteller' eat first. What it eats is the focus of the family, because it hints at the fortune of the family for the coming year.

If the dog eats ghee or grated cheese, this foreshows a blossom pasture, if it eats tsampa or cake, it predicts a good crop harvest; but if it eats meat, it is a very unlucky sign, meaning that death or pestilence may occur in the family. Curiously, the dog seems to understand the wish of its host, and eats little meat.

Afterwards, the family eventually begins their New Year's reunion dinner. They try to eat as much as possible, because otherwise they believe they will be carried away by ghosts. In the early morning of the New Year's Day they eat only barley flake gruel, which has long been a laughing matter for the people of other areas.

Besides, there are also some other regions, where the date of the New Year is different from elsewhere. For instance, the Tibetan people living in the pastoral area of the Northwestern Sichuan celebrate the festival according to the Han lunar New Year's days.

The Tibetan people living in Jiarong, the rural area of Aba prefecture, the Northwestern Sichuan do it on the 13th day of the l0th or 11th Han lunar month, called the Tsampa New Year's.

0 Comment ON "How Do Tibetans Celebrate Tibetan New Year"