The Bathing Festival lasts for one week in the early part of the 7th month in Tibetan Calendar. In Tibetan it is called "Gamariji," meaning Qishan star, or Venus. As the star rises to the sky, the mass bathing starts. As the star sets, the bathing ends. It is said by Tibetan Legend that bathing at this period is beneficial to health. According to Tibetan Buddhism, the water in Tibet at this timehas eight advantages: sweet, cool, soft, light, clear, clean, unharmful to throat, nor to belly. Judged from the natural environment and climate of Tibet, the river water has a relatively high temperature and is suitable for bathing. During the seven days, tens of thousands of Tibetan men and women go to river or lake to have baths. The tents, big or small, dot the beach and Lingka into a colourful world. 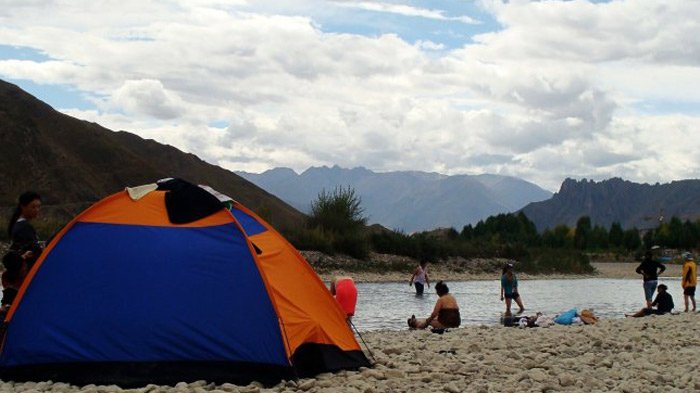 Tibetans are having a bath in the river.

Legend has it that pestilence was wide spread, leading to great suffering of the people. The Avalokitesvara, one of the Buddhist deities, poured holy water into the rivers of Tibet. After bathing in the rivers, people recovered miraculously from their illnesses. Ever since, at this time every year, people bathe themselves in rivers. This custom has been handed down from generation to generation and gradually developed into a festival. It is believed that river baths during this week will not only clean the body, but also wash away potential diseases.