Understanding the importance of Tibetan music

Music is one major aspect of a country’s identity, of its past, and where it hopes to be on the future world stage. We have been to many countries and always had a small interest in local pop cultures, comparing the most listened tracks with the most revered local bands and artists. It is quite easy nowadays to differentiate the chart music from the traditional vibe, especially where we live in China. The spectrum is diverse, the language is the obvious main characteristic that defines its origin. But the uses of different instruments and the way they are played are what is most enjoyable about music around the world. 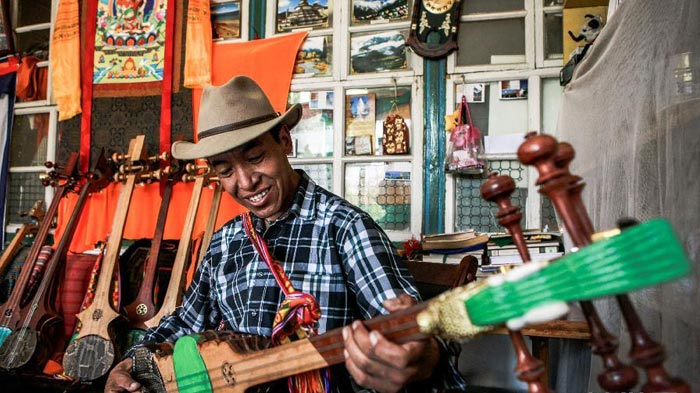 Tibetan music needs to be explored in your lifetime. It is equally empowering as it is sinister, and cuts right to the emotional core. There is something very unique about it, even more so when you are actually in the vicinity of a Tibetan party or live show. There are, of course, different sounds when it comes to Tibetan styles of music, which you will find in this article.

Tibet abides to current Asian pop culture very well and in no way is that a bad thing. They are well represented by their local bands and singers, such as Tsering Gyurmey, who has become one of the faces of modern sounds in Tibet. Songs celebrating Tibet’s traditions and past movements are commonplace for Tsering, and is well known and publicized for his fantastic, strong vocals; something which Tibetans believe is because of the high altitude. Some Tibetan singers have even made a name for themselves in neighbouring China and Japan including Alan Dowa Dolma and Gao Yuan Hong. Their voices are as powerful as Tsering’s, and fit the confines of Asian pop music extremely comfortably. However, there is plenty to learn from the more traditional Tibetan music, so let’s look at some key components. 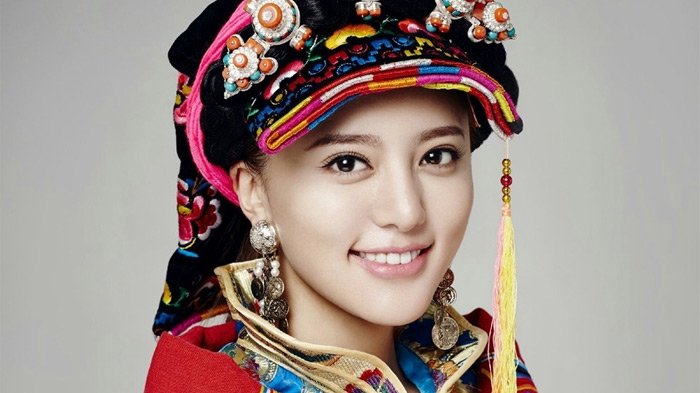 What Types of Music Does Tibet Have?

It is easy to identify at least five types of music exclusive of mainstream pop music (mentioned above).

The first is something that resembles an opera. The songs are pleasant and jovial, usually resounding an old Buddhist provincial teaching and are very much a group effort. You will find that flutes and lutes combine with some percussion beats to create a soft aroma of music that is thought to resemble a constant communication link with the divine world, one that only "perfect beings" are able to compose. It is officially named Sino-Mongolian music and is heard in the streets during festivals and parties. 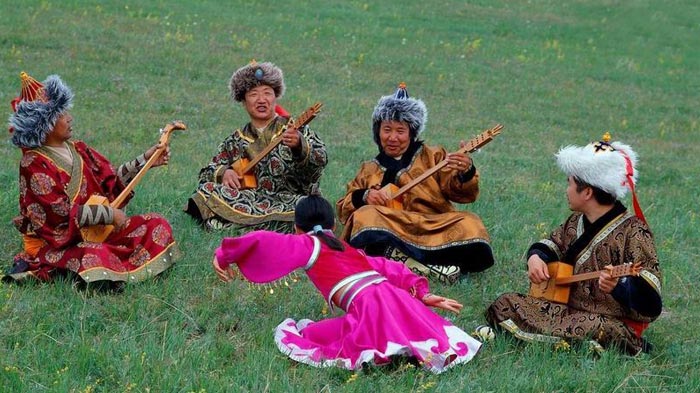 Sino-Mongolian Music in the party

The second is totally different and much more sinister, yet has acted as a relaxing tool for many people around the world. Liturgical Chanting is unlike anything else you have heard, as it needs the efforts of a chant leader (someone who also trains monks in Tibet), therefore being very religiously influenced. The instruments and voices may be rhythmically independent of each other, or they may coincide and proceed together in an unstressed rhythm of equal pulses, which creates a long and whirring drone during the ensemble. It is truly compelling and should definitely be used to help with relaxation. 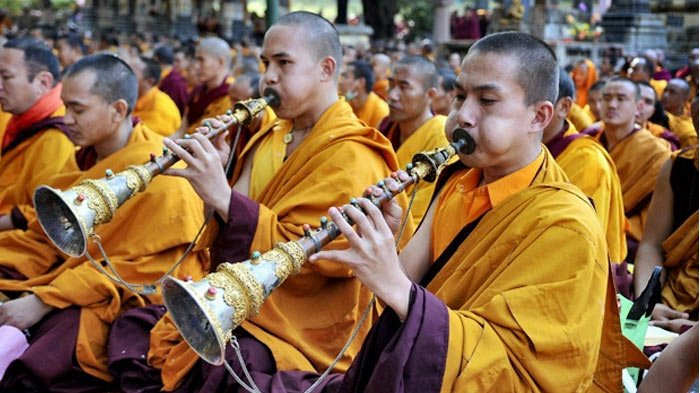 The third is somewhat recognizable to the western world as it is basically a harmony played out in choral fashion with two or more people. It can be compared to an acapella band but much more subtle and slow. Labelled Antiphonal Overlapping Singing, it sounds very melodic and can be enjoyed and remembered by those that listen, therefore being more accessible for onlookers to join in. 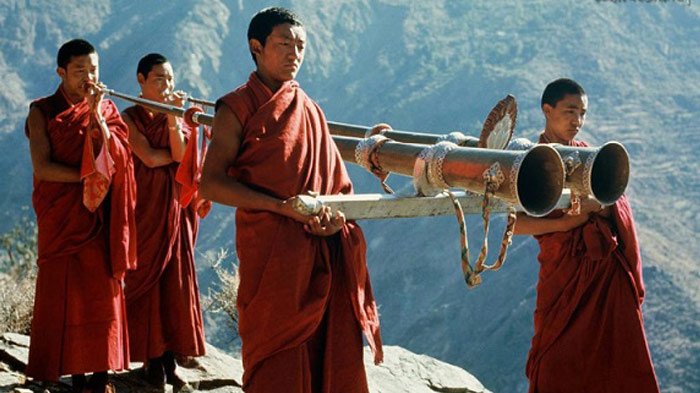 The fourth is by far the most active as it is accompanied by dancing and eccentric movement. The Mystery Dance is saved for the New Year festivals in February and March, when Tibet becomes united to see out the old year and welcome in the New Year. The dance and rapid-fire beats are designed to identify and scare away the old year’s demons in man and state, and start the New Year on a high. It is a party vibe, with off-beat percussion instruments, flutes, stringed instruments and loud singing combined to create an amazing, hectic show and experience for those watching. 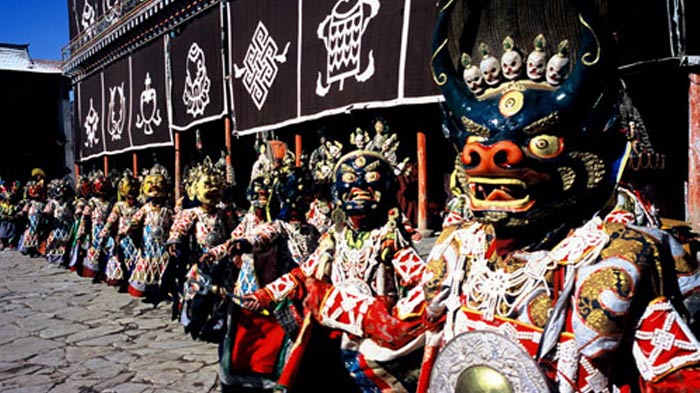 The Mystery Dance in Tibet

The fifth type of music is very much the more modern of the styles, but the lyrics focus mainly on Tibetan everyday life. It is common to hear songs of agriculture, love and friendships, as well as old Tibetan ideals of peace and compassion. Classed as Tibetan Folk, the songs are played in band form with choruses and verses. 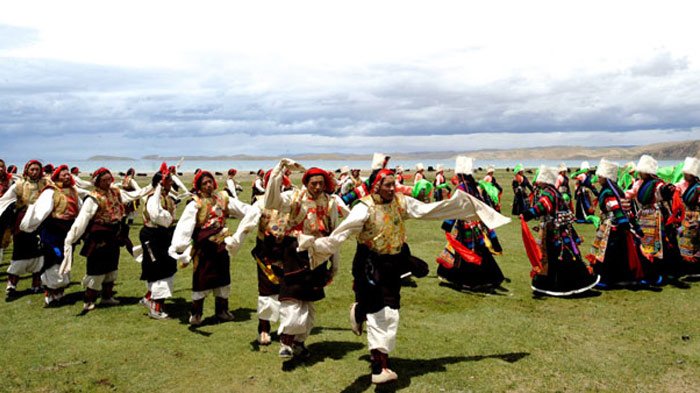 Instruments to Listen Out For

Typically, Tibetan street and folk music is in acoustic form with the use of the Tungna, a four-stringed carved piece of wood topped with Yak skin. If accompanied, there could be a wide array of different percussion instruments used, such as cymbals, bells and drums. The beat doesn’t often change during one song so it is easy to follow along. Other often-used instruments include bamboo flutes, thigh bone flutes, shell trumpets and four-metre long Tongin horns. All can be seen on the roads around Lhasa and around the Potala Palace during the day. It is certainly worth walking around the city and listening to the many sounds that are produced. 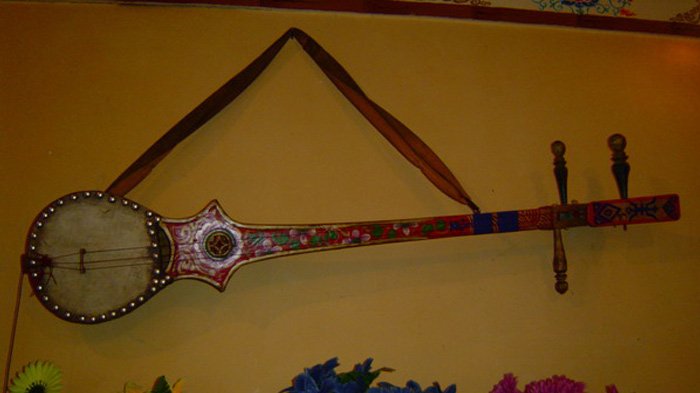 Within the monk chants, only very bassy instruments are used to complement the low continuous chants, and occasionally put together with a touch of cymbal and flute. The idea is to keep the monks and their listeners, in a constant state of peace and meditation. It is seriously one of the most peaceful sounds in the world, and can go on for hours until it takes its natural diminuendo. 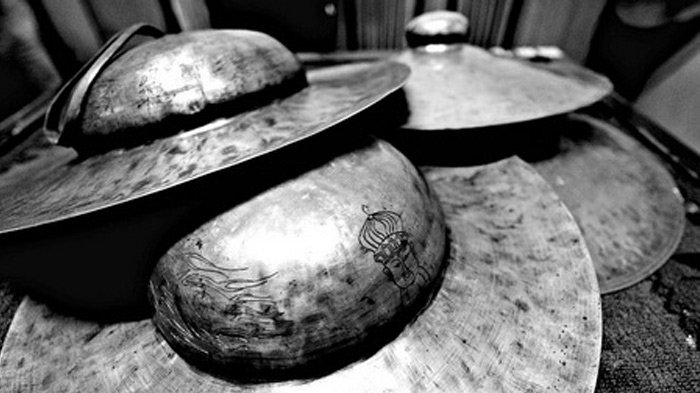 The music you will hear in Tibet will change your very soul, if you let it. The magnificent positive effects it has for the mind and body are unrivalled, the surrounding atmosphere encapsulates colours and dance, and people become part of the rhythm. Whether you are visiting Tibet any time soon, you have already visited Tibet, or you simply want to know what to expect from Tibetan music on YouTube, the varying forms of song that comes from this ancient and sophisticated nation are more than enough to take your attention.

Take yourself away from the norm, and try the Tibetan vibes. We are big fans, especially of the Liturgical Chanting, so we would love to hear what you think!