A Glimpse of Tibetan Monk's Life

As you enjoy your Tibet tour in Lhasa or other parts of Tibet, one of the most intriguing aspects would be the mysterious life of Tibetan monks. Let’s have a glimpse of how a Tibetan becomes a monk and what their daily life is like in Tibet.

According to Tibetan Buddhist doctrine, small children can’t become a monk until they reach the age of 7 or 8 when they can drive crows away. Besides, the head of the monastery will check their background. Those who have been with goldsmith, blacksmith, and butcher or practitioners of sky burial will be considered “unclean” and not a qualified candidate for being a Lama. 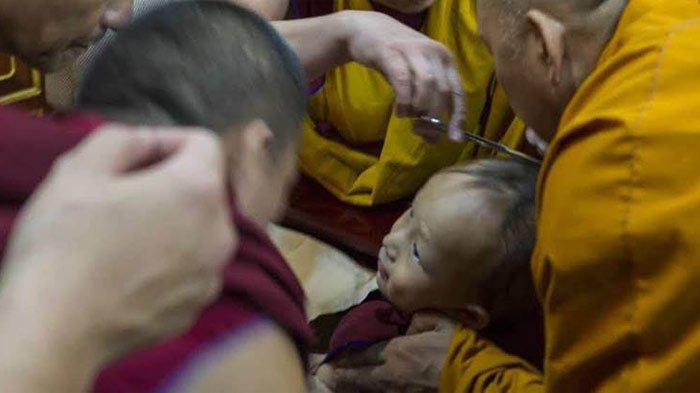 Head of the monastery removed the remaining hair of the kid.

If a kid proves to be qualified, he needs to find two teachers. One is responsible for his social conducts; the other takes care of his study of classics of Tibetan Buddhism. Mostly, these teachers would be his relatives such as uncle, older brothers, etc.

Before the tonsure, the kid has to present a Hada (white ceremonial scarf used by Tibetans), yak butter tea, and some gifts to his teacher. Later his teacher will shave most of his hair but only keep a strand of hair in the middle. Then, the kid is expected to be taken to meet the abbot, the head of the monastery. After making sure the kid truly decides to become a monk, the abbot will cut the remaining hair of the kid and give him a Dharma name for the newly-ordained Lama.

Shortly after small monks begin their scholastic life in the monastery, they need to serve their mentor or master for 3 years, during which they will learn all the monastic disciplines and customs in monasteries; In addition, they are also expected to shoulder chores of the monastery and learn how to spell Tibetan Buddhist mantra and recite some basic prayers. 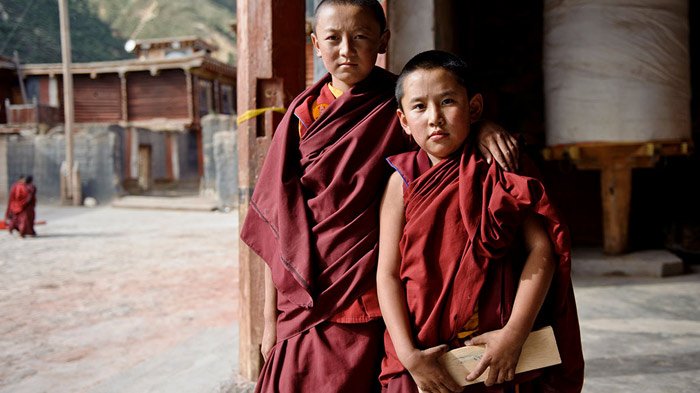 Young Tibetan monks in the monastery

After young Tibetan monks have a good command of Tibetan language, it’s time for them to study the 5 Buddhist classics:
a.Buddhist Logics (“Yinming”): It’s most elementary knowledge of Buddhism, which is expected to be studied for 3 years.
b.Heart Sutra (“Banruo”): it’s literally means the heart of perfection of understanding.
c.Madhyamika ( “Zhongguan”): dependently co-arisen phenomena
d.Monastic Discipline (“Jielv”)
e.Kusha-shū (“Jushe”)

The above 5 Buddhist classics are mandatory courses for Tibetan monks. It normally takes them 20 years or more to finish all of them mainly via reciting and monk debate.

Tests on reciting Tibetan Buddhist scriptures are held in spring and summer. Monks will be divides into different groups and in turn recite the Buddhist scriptures (around 50 pages in one test) to head of the monastery. If they fail, they will be punished.

Monk debate is also one of the major forms of testing their study. The most famous monk debate is held from 15:00 inside monk debate courtyard of Sera Monastery, which often draws huge crowds of international tourists to visit. Normally, two monks make a group. One monk stands and keeps questioning the other who sits on the ground by clapping his hands and rolling Buddhist mala and jumping. They debate with each other with great passion and energy. If one fails the exam, he won’t get his degree and can only be an ordinary monk serving others. As you enjoy your Lhasa tour, you will be able to see the dramatic monk debate in Sera Monastery and visit a number of towering monasteries in Lhasa. - 5 Days Lhasa Small Group Tour with Three Major Monasteries 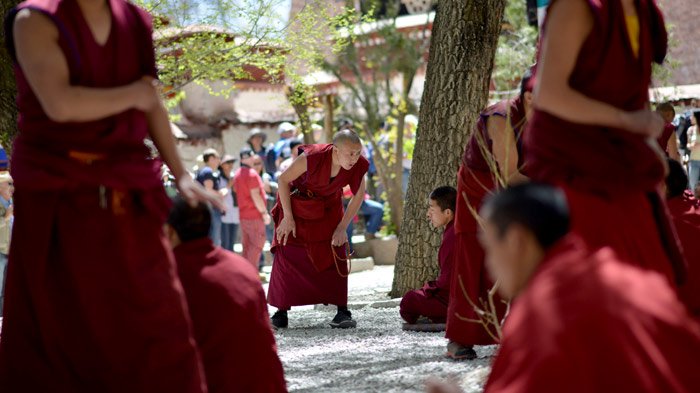 Monk debate in Sera Monastery is one of the highlights of Lhasa Tour.

As monks keep pursuing their Buddhist study, they will eventually take the highest exam and academic degree known as “Geshe” of Gelugpa sect of Tibetan Buddhism, equally to Doctoral degree.

Special Groups of Tibetan Monks in the Monastery

It’s a misunderstanding that all lamas living in the monastery study Buddhist classics. In fact, only half of the lamas solely study Buddhist scriptures. The rest are trained to say prayers to bless ordinary people, offer comfort for the dead of different families and preside at wedding or funeral. 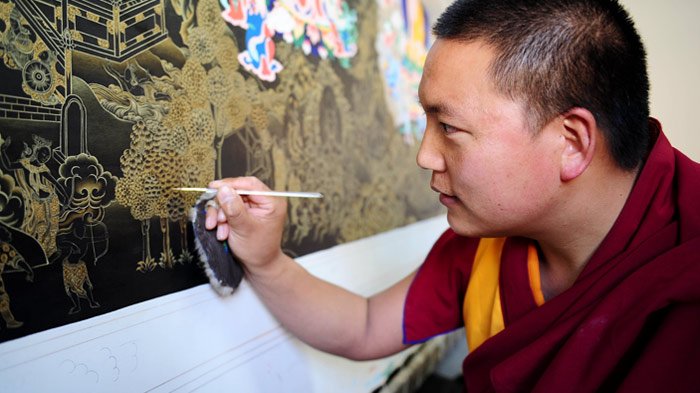 Some monks in the Monastery are only trained to do Thangka painting.

While some are good at medical treatment, fortune-telling and painting, Buddhist sculptures making, and engraving Buddhist scriptures, even playing a musical instrument; Another special kind of lamas, widely known as “Tuo Tuo”, never study Buddhist classics. Instead, they train hard to practice their martial arts and act as the bodyguard, and ferocious warrior for protecting the monastery.

Tibetan monks or lamas lead a fairly peaceful life. At daybreak, the monk on duty will climb to the rooftop of Great Assembly Hall of the monastery and clap his hands for three times and loudly pray for the blessings of Goddess of Mercy (also known as Guanyin). Upon hearing the “morning call”, all the monks will swarm into the assembly hall for morning praying, which is a solemn and incredible spectacle to see. 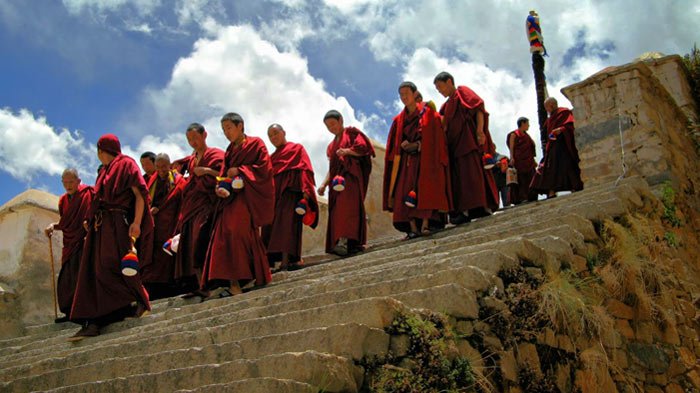 Monks returned to their dorm after morning praying.

Morning Praying
Morning praying lasts for 2-3 hours, during which hundreds of young monks will line up to serve other monks with butter tea and porridge. In the meantime, monks can have their meal while chanting Buddhist mantra. What a lovely and rare scene to see for visitors. 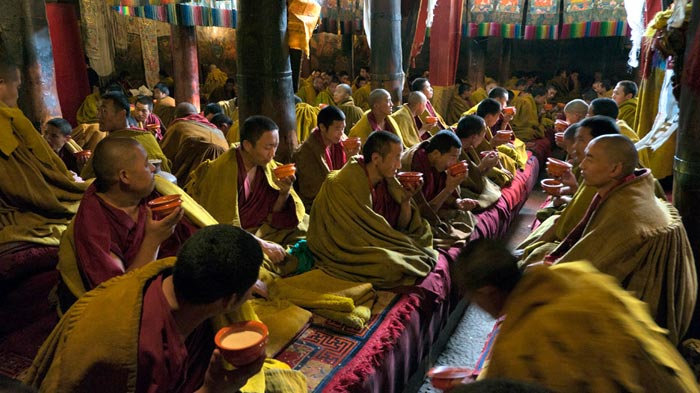 Tea break during the morning praying in Tashilhunpo Monastery

It’s often the case that led by the head of the Buddhist scripture chanting, monks will perform praying for happiness of a family or for the rest and peace of the dead of family members in mourning. Shortly after the pray, the family will offer some money to the monks as a special way of giving.

Afternoon Praying
From 9:00 to 10:00 and 15:00-16:00, Tibetan monks will have afternoon praying at smaller places like Zhacangs Hall (college) and Khangtsen (dorm) in a monastery.

Partially due to the further opening of Tibet tour and revolution of science and technology, nowadays, the former ascetic life of Tibetan monks has also changed. You may find it surprising to see the modern gadgets (such as iPhone, Laptop, and DSLR, ect) used by many Tibetan monks as your tour Lhasa. 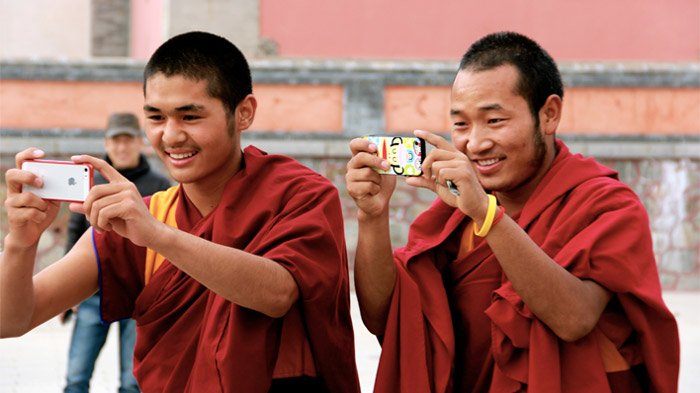 Many young Tibetan monks believe that as a student of Tibetan Buddhism, it’s of great importance to understand the cultural and religious difference between theirs and others, and between east and west. The new technology allows them to know more about the outside world, which cannot be taught from Buddhist scriptures. Mostly importantly, they can have a global perspective and grow in line with the world.

As one monk put it, “Study of Tibetan Buddhism did not mean you should turn a blind eye to what was happening outside the monastery. All cultural and religious heritages must develop along with that of the society.”

Controversial as it may seem, such change of traditional monastic life is inevitable and will certainly do good to the flourishment of Tibetan Buddhism in the modern era.