What on Earth is Vajrayana - Tibetan Buddhism

Tibetan Buddhism is a unique form of Buddhism practised primarily by Tibetans and Tibetan origin people like Bhutanese, and some Mongolians. It is an eclectic mixture of Bon animist traditions, Indian Tantrism, and traditional Buddhism. The Tibetan Buddhist tradition is called Vajrayana or the Diamond Vehicle Buddhism. Buddhism was introduced to Tibet in from India in the form of Sanskrit texts brought in by missionaries in the 5th century CE. But nothing was translated till 641 CE when the famous Tibetan king Songtsan Gampo unified Tibet through military conquest and married two Buddhist princesses (Wen Cheng of China and Bhrikuti of Nepal). Songtsan Gampo converted to Buddhism following his marriage to them.

He also is credited with building the first Buddhist temples in Tibet, including the Jokhang in Lhasa and the Changzhug in Nedong. Also, he put Tibetan translators to translate the Sanskrit Buddhist texts brought in from India.Buddhism became the state religion during the 8th century CE in the reign of King Trisong Detsen. He invited the famous Buddhist masters Padmasambhava and Shantarakshita to Tibet to teach Buddhism. Padmasambhava is now venerated all over Tibet as Guru Rinpoche, and as the founder of one of the sects of Tibetan Buddhism, the Nyingma tradition. He is also credited with building the famous Tibetan learning center and monastery at Samye.

From then on, Tibetan Buddhism was heavily influenced by ruling dynasties in India, Central Asia, China, and Mongolia. Tibet was a melting hub of different philosophies, traditions, and teachings.

Modern Tibetan Buddhism is divided into 5 schools. These schools are a result of centuries of changes, mergers, and divergence in various other schools. There have been other schools which came and went, but the current surviving ones of the modern era are the commonly followed ones. The current 5 schools combine different buddhist traditions. The 5 schools are - Nyingma, Kagyu, Gelug, Sakya, and Jonang. They will be explained in detail below.

Nyingma is the oldest of the 5 traditions of Tibetan Buddhism. It literally means “ancient”. Nyingma is said to be based on the original translations of Sanskrit Buddhist texts into Old Tibetan done in the 8th century CE. Nyingma is associated with Guru Rinpoche Padmasambhava and he is considered the founder of the Nyingma tradition. Nyingma is highly esoteric and a lot of its teachings are based on Tantric yoga and highly advanced meditation techniques like Dzogchen, and Mahayoga. Nyingma followers are primarily affiliated to the Samye Monastery in Lokha, Tibet. Most of the famous Nyingma monasteries are located in the Kham region. 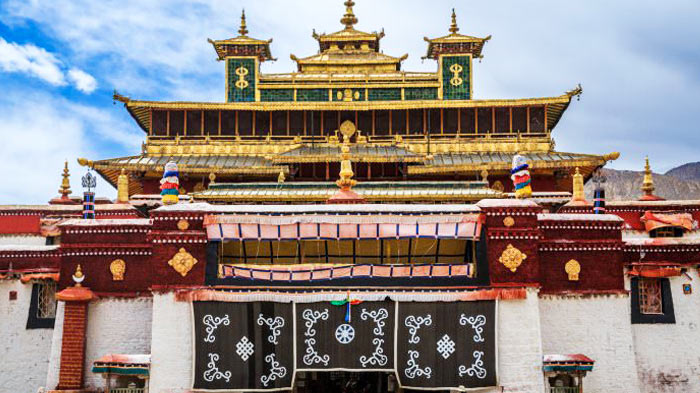 Kagyu is also known as the oral lineage of Tibetan Buddhism. Kagyu is famous for its emphasis on devotion to one's particular teacher and the teacher's lineage. This led to a large number of lineages within the main Kagyu tradition. The teachings of the Kagyu tradition primarily rely on the Mahamudra texts and practises. This is a form of esoteric yoga which teaches single pointed concentration, transcendence of conceptual elaborations, understanding the phenomenon that everything is part of one wholeness,and the fruition of the path, which is beyond any contrived acts of meditation. 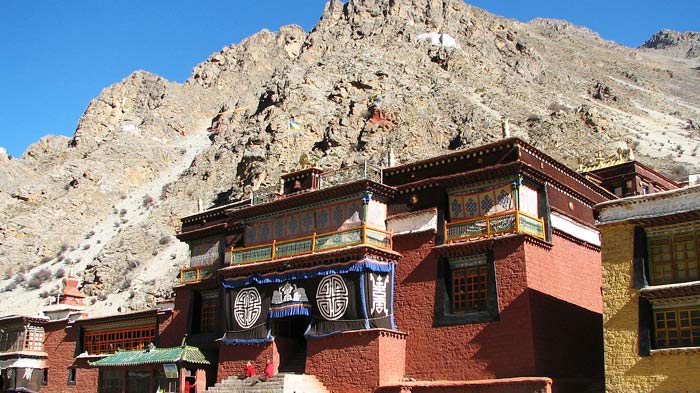 Some of the famous monks of this tradition are Milarepa and Gompapa. They are venerated throughout Tibet for their contribution to Buddhism. The Karmapas belong to the Kagyu school. Famous Kagyu monasteries in Tibet are Tsurphu Monastery, and Dalkha Gampo.

Gelug or Gelugpa is the newest school in Tibetan Buddhism. It was founded by the famous Buddhist master Je Tsongkhapa. It became the most powerful school of Tibetan Buddhism towards the end of the 16th century when the Gelug monks allied themselves with the Mongols. The head of the Gelug school is the Ganden Tripa, but its most influential member is the Dalai Lama. Important Gelug monasteries are the Ganden Monastery, Sera Monastery, Tashilhunpo Monastery, and Drepung Monastery. 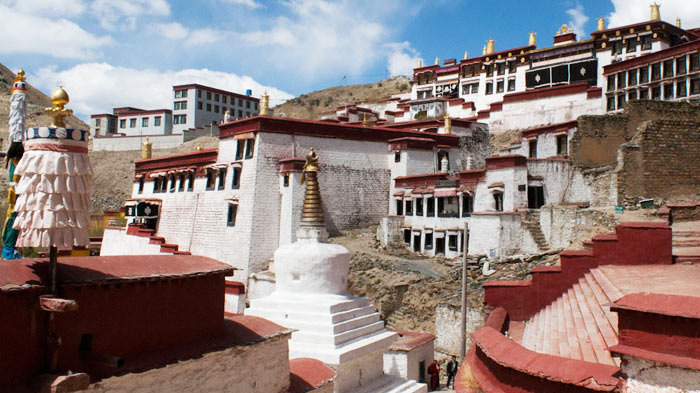 The primary teachings of this school are based on the Lamrim (or stages of the path), which itself is based on elaborations of the treatise “A Lamp For the Path of Enlightenment” by the famous 11th century Buddhist master Atisha. The other important teachings of Gelug are based on the concept of Sunyata or Emptiness, where the ultimate goal is to realize the nature of emptiness in all phenomena. Tantric yoga and Tantric texts are also taught in all Gelug institutions. Another major component of the Gelug school is monastic ordination and following of the monastic rules (Vinaya). To be a Gelug teacher, it is compulsory to be an ordained monastic.

Sakya is another one of the major schools of Tibetan Buddhism. Its name means “Pale Earth” and this is in reference to the grey landscape of the Ponpori hills in Shigatse where the order was first founded. The seat of this order is located in Sakya Monastery near Shigatse. The Sakya school was founded during the second Sanskrit to Tibetan translation period of Buddhist texts in the 11th century. Their teachings are based on the esoteric tantric texts. The Sakya tradition uses teachings such as Mahasiddhas, Sadhanas, etc. These are tantric visualisation and meditation techniques. 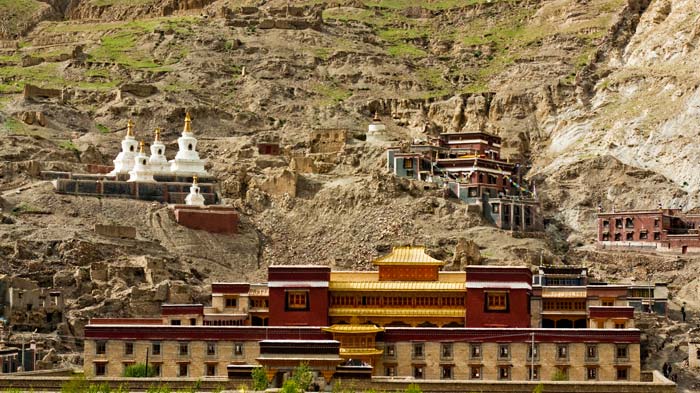 Some of the important teachers of Sakya tradition are Sakya Trizin, Naropa, and Sakya Pandita. The interesting feature of Sakya lineage holders is that they don't have the adhere to a strict rule of celibacy, and they are allowed to marry and have children. This is not very common in the other traditions of Tibetan Buddhism, where celibate monasticism is emphasised.

Last in this list is the Jonang school of Tibetan Buddhism. Its origins can be traced to the early 12th century when it was founded by the Buddhist master Yumo Mikyo Dorje. The Jonang school has had a tumultuous past when it nearly become extinct in the 17th century when the 5th Dalai Lama forcibly converted Jonang monasteries into Gelug monasteries. It was revived only when monks re-established monasteries in Amdo, Kham, and other Mongol areas. The main Jonang monastery is the Dzamthang Monastery, which is located in the Amdo region. 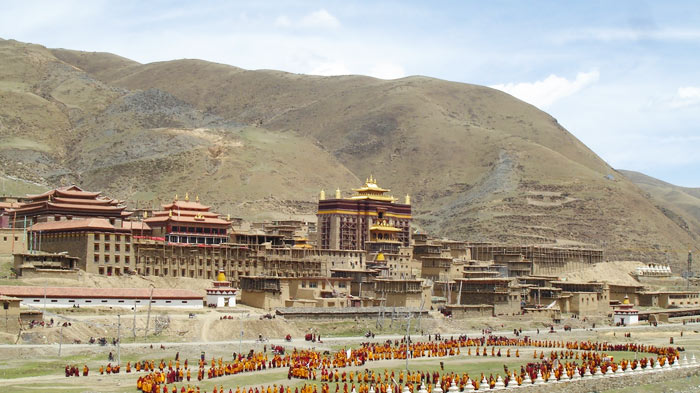 There are three main sects in Buddhism- Hinayana, Mahayana, and Vajrayana. Chinese Buddhism is a mixture of Hinayana and Mahayana. Tibetan Buddhism on the other hand follows Vajrayana teachings. While all three sects come from the same source, they have slightly different teachings, practices, and interpretations.

Chinese Buddhism is a mixture of early Buddhist teachings, belief in Bodhisattvas (compassionate beings that delay their enlightenment to help other beings achieve it first), and Chinese cultural practises. Chinese Buddhists believe that practising the Buddha's teachings step by step is the way to enlightenment.

While Vajrayana also has many aspects of the above mentioned practises, it is different from Chinese Buddhism. In Vajrayana Buddhism, the practise is much more advanced in that practitioners are encouraged to visualise Buddha nature in themselves and act accordingly. That way Buddha nature becomes a sort of constant in their lives. Tibetan Buddhism is Vajrayana plus other Tibetan cultural practises like bowing, pilgrimage, chanting, etc.

Local Tibetans Buddhists have their own set of unique culturally inspired practices. They have a rich set of rituals. So starting with the home, most Tibetans have a shrine or altar at their homes for the Buddha and other deities. They offer bowls of water (symbolising purity), flowers, yak butter lamps (symbolising the dispelling of ignorance), offerings of Tsampa and yak butter, etc.

Tibetan Buddhists follow rituals such as bowing, turning Mani wheels, hanging prayer flags, painting boulders with mantras, and chanting with prayer beads. These are only few of the numerous fascinating rituals followed by Tibetan Buddhists.

Tibetans often chant sacred mantras like “ Om Mani Padme Hum” or Vajra Guru mantra or any other mantra as a form for worship. All Buddhists visit monasteries on the big festival days for festivities, prayers, and rituals.

Tibetan Buddhism is a fascinating collection of philosophy, rituals, history, and culture. For anyone visiting Tibet for the first time, they'd be astounded at the sheer colorfulness and diversity of Tibetan Buddhism. Knowing and understanding the basic concepts of it makes for a more memorable experience.

0 Comment ON "What on Earth is Vajrayana - Tibetan Buddhism"