Tibet is famous for its development of a unique type of Buddhism. The majority of ethnic Tibetans are Buddhists, although there are adherents to the animist Bon faith as well, which has been very influenced by Buddhism. Religion in Tibet tends to be an eclectic mixture of Buddhism and tribal animist beliefs. Religion, especially Buddhism, is very central to Tibetan lifestyle and it influences the very culture of Tibet. Tibetan Buddhism consists of a blend of Vajrayana, Mahayana and Tantric beliefs. When one thinks of Tibetan culture and religion, immediately a picture of a Buddhist monk, prayer wheels and prayer flags come to mind.

For many, Tibetan Buddhism is still considered exotic and full of strange glittering statues of different Buddhas and Buddhist deities. Tibetan culture, traditions and architecture revolves around this Buddhist culture. To many tourists and foreigners, identifying and making sense of the Tibetan Buddhist deities can be a little daunting. This article will attempt to help in clearing this confusion as we will be looking at some of the primary Buddha figures in the tradition here.

This list includes a brief introduction to the different Buddhas, their significance in the Tibetan Buddhist traditions, the festivals associated with them and other relevant information.

Gautama Buddha. First in our list, we shall include the historical founder of Buddhism, Siddhartha Gautama Buddha. Alternatively known as Sakyamuni Buddha or Gautama Buddha, he lived approximately 2500 years ago in North-East India. He is considered the founder of Buddhism and the Buddha for this current age. Tibetans, and indeed all Buddhists, believe that there is not only one Buddha but many. These Buddhas are believed to appear to mankind when the time is right. Gautama Buddha is the Buddha for this present age and before him there were other Buddhas and there will be many more Buddhas to come after Gautama. 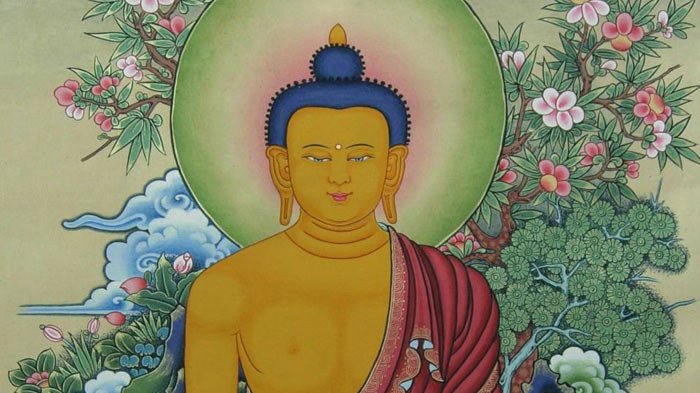 Sakyamuni Buddha as he is known in Tibet is worshipped as a highly important figure in Tibetan Buddhism. Normally Tibetans show their respects to Sakyamuni by bowing and prostrating to statues of him in the temples. They light butter lamps, incense sticks and offer tea, flowers, money and small articles at the altar, or to the monastics who reside in the temples.

There are many festivals associated with Sakyamuni Buddha as he is the main object of worship. Some of the popular festivals are Saka Dawa, Tibetan Butter Lamp Festival and the Buddha Unfolding festival.

Saka Dawa commemorates the Birth, enlightenment and death of Sakyamuni Buddha. It is celebrated all over Tibet during the months of May and June every year following the Vesak full moon day. During this time people do good deeds, offer to monks and charity, go to the temples and take part in religious activities. This is a very important festival for Buddhists.

Another important festival is the Butter Lamp Festival. It is generally celebrated in the month of March and it commemorates Sakyamuni’s great debating victory over his opponents. Debate is a very important part of Tibetan monastic life, and is learned and practiced in most of the temples. Temples feature colourful butter sculptures of the Buddha during this festival. Butter lamps are also offered. People go to temples to see the sculptures and also to listen to the debates by the monks. The temples of Lhasa are especially beautiful at this time.

Another very interesting festival related to Sakyamuni is the Buddha unfolding festival celebrated every year around June at the Tashilhunpo monastery. Huge paintings of the three Buddhas, Sakyamuni, Maitreya and Amitabha are hung at the large walls of the monastery. People crowd to pay their respects and there is great fanfare surrounding this festival. It is an awe-inspiring sight.

Maitreya: Future Buddha of this World in Buddhist Eschatology

Maitreya. Next in our list is Maitreya or as he is known in Tibet, Jampa. He is believed to be the next Buddha after Sakyamuni Buddha. He is prophesied to come at a time when Gautama Buddha’s teachings are completely forgotten by the world. He is believed to be currently a Bodhisattva or Buddha-to-be living in Heaven and awaiting his time for helping sentient beings. Tibetans worship him as a compassionate Bodhisattva as well as the next Buddha-to-be. 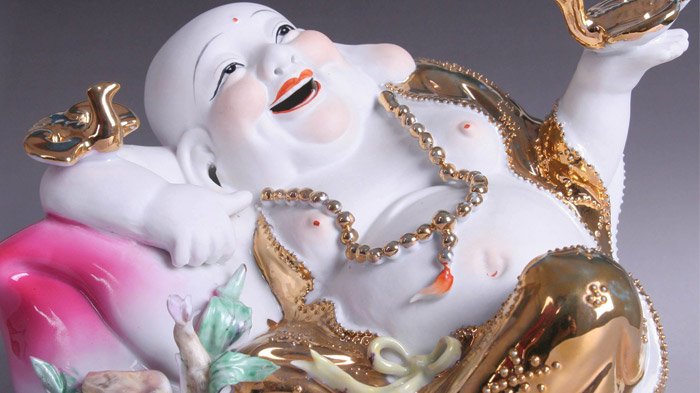 He is normally portrayed clothed in jewels, with bright blue eyes and is often placed alongside Sakyamuni Buddha and Amitabha Buddha in the temples. Some of the festivals associated with him are the Maitreya festival and Buddha Unfolding Festival. As Maitreya is not a central figure in the tradition, there are few festivals which revolve around him but he is included in many ceremonies and festivals as one of those who are celebrated.

The Maitreya festival is held in most temples around Losar time (February-March). Maitreya is worshipped with prayers, bowing, offerings and by doing good deeds. The Buddha Unfolding festival has been discussed in the previous section; another festival is held on the 25th day of the first Tibetan month at Barkhor street in Lhasa. Monks carry the statue of Maitreya around in a procession. This​ is also a wonderful sight in itself.

Amitabha: the Buddha of Infinite Life

Amitabha. Amitabha or Amitayus Buddha is yet another central figure in Tibetan Buddhism. He is believed to inhabit the western heaven known as Sukhavati or Dewachen (in Tibetan). The Panchen Lamas, the second most important lamas after the Dalai Lamas, are believed to be an emanation of Amitabha Buddha. 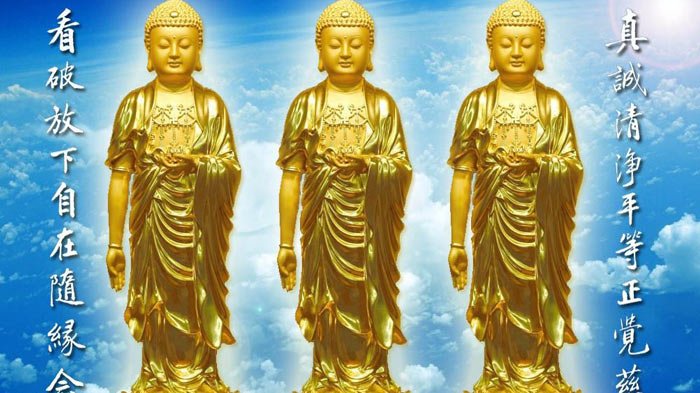 Tibetans recite certain mantras related to him with a pure heart, and believe that one will be reborn in the land of Amitabha Buddha where one will eventually attain enlightenment, and the cessation of the round of births and deaths.

Tibetans have a number of festivals relating to Amitabha. There are monthly festivals held in local monasteries in honor of Amitabha and other Buddhas. The 30th day of every month is Amitabha Buddha day. Locals will sometimes follow special precepts, chant Amitabha’s name and go to temples to make offerings to monks.

During the Monlam festival held during the month of March, Amitabha is revered as one of the important deities. Prayers and chantings are held, people prostrate before statues of Amitabha, release captive or doomed animals and do good deeds in the hope of being reborn in Amitabha’s realm. Jokhang temple in Lhasa has a particularly spectacular Monlam celebration.

Medicine Buddha. Last but not least in our list is the Medicine Buddha or Bhaisajyaguru. This Buddha is considered very important in Tibetan Buddhism. He is believed to cure physical and mental ailments and to purify any negative karma. He is easy to recognise as he is generally depicted with blue colour. 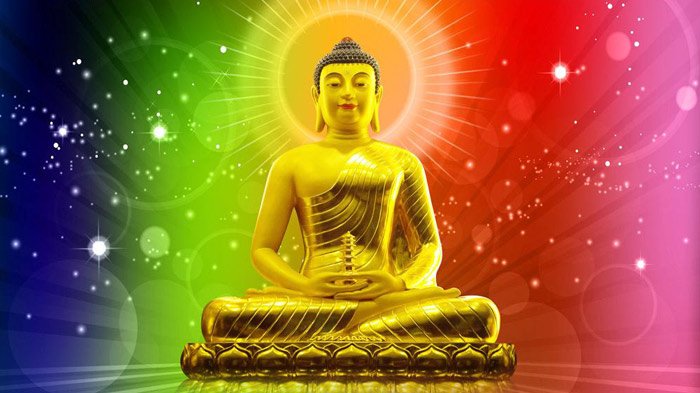 The Tibetan practise of worshipping this Buddha is by reciting the Medicine Buddha mantra 108 times over a bowl or glass of water. Once done the water is believed to be blessed and pure. It is then drunk by those needing curing. This practise will be done for several days until the sufferer is deemed cured.

There are a few festivals which feature the Medicine Buddha. One important one is the Tibetan Bathing Festival or Garma Ri Gi, which normally takes place during September every year. It is held at river banks all over Tibet. Young and old alike participate in this festival. People take dips in the cold waters of the rivers and wash their clothes, which is believed to wash off the negativity and ill luck of the previous year. After this people will set up tents called Lingka to have picnics in the open air. During this time, plays and dramas will be set to traditional chants and music. This aids in teaching the locals about their cultural history. Participating is a great way to learn about Tibetan culture as well as meet local people.

During the Thangka unfolding festival held during the Shoton festival around August 21, huge Thangkas or paintings of the different Buddhas including Medicine Buddha are unveiled. This is a spectacular event and it is amazing to see the devotion of the people at this time.

Tibetans are very protective and proud of their religious traditions. They uphold Buddhism very well and almost all Tibetans take part in religious activities with great vigour. For anyone going to Tibet, whether first time or otherwise, going during festival times is a great opportunity to observe the cultural vibrancy of the tradition as well as to mingle with locals. Tibet has more than 100 festivals celebrated throughout the whole year and most of these festivals are celebrated with gusto and feature most if not all the above mentioned figues. Attending the festivals in Tibet is a must for anyone considering going there.