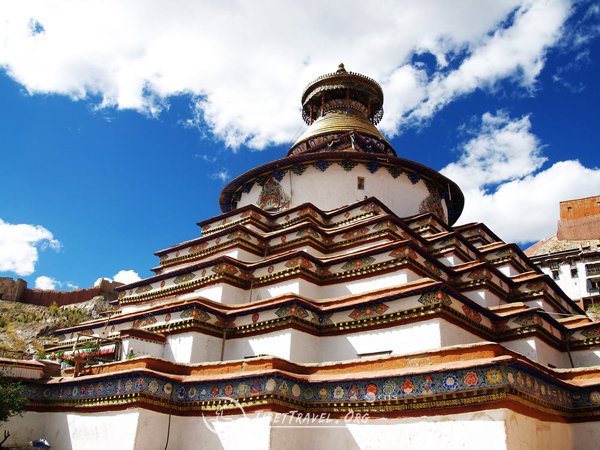 Based on the latest research from Jegyel Pasang Norbu, expert of the Tibet Museum and Shaka Wangdu, deputy researcher of the Tibet Research Institute of Cultural Relics Preservation, we hereby offer our readers the basic knowledge of Tibetan stupas. We hope that this information will be helpful for you to better understand the unique Tibetan culture. 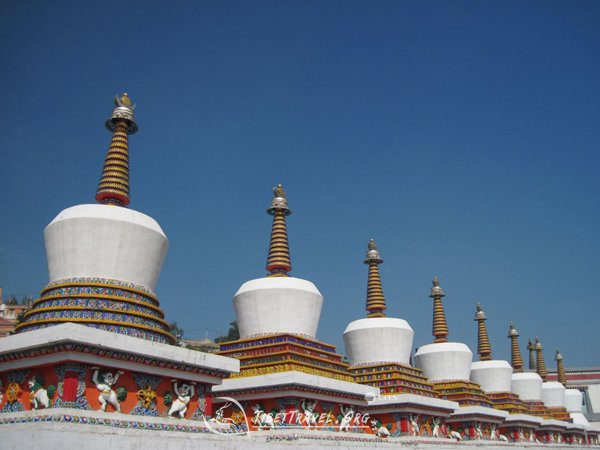 Stupas in Tibetan regions are not only precious cultural relics but also masterpieces of Tibetan arts. Shaka Wangdu explained that the stupas' shapes and characteristics during the 10th and 15th century take after those introduced to Tibet after the establishment of the Tubo Kingdom with both Indian and Nepalese characteristics. The steps often have two or three layers with square or polygonal horizontal profile and an inverted-bowl-like body.

The 11th century saw diversity in the Tibetan Buddhist stupas. As far as we know, there are eight major styles, each closely related to the life stories of Shakyamuni.

Following are some basic introductions of those eight stupas:

Enlightenment Stupa: It symbolizes the birth of Shakyamuni, and features in the four circular-lotus-shape levels.

Bodhi Stupa: It symbolizes Shakyamuni’s enlightenment in the Rajagriha. The stupa usually has a regular tetrahedron base and a four-layer step, representing the four avatars of Shakya Buddha respectively.

Dharmachakra Stupa: It shows the scene where Shakyamuni turning the dharma wheel in Varanasi.It is in the form of a wheel with many spokes, representing the Shakyamuni is teaching the spiritual laws of the universe.

Miraculous Transformation Stupa: It shows that Shakyamuni is showing his supernatural power in Shravasti. Its step is either shaped in a four-regular-octahedron or a four-regular-tetrahedron.

Descent Stupa: It symbolizes Shakyamuni’s descent to the man’s world after thirty-three days. It is featured with four levels of regular octahedron. Each has one step representing the heavenly ladder that leads Shakyamuni 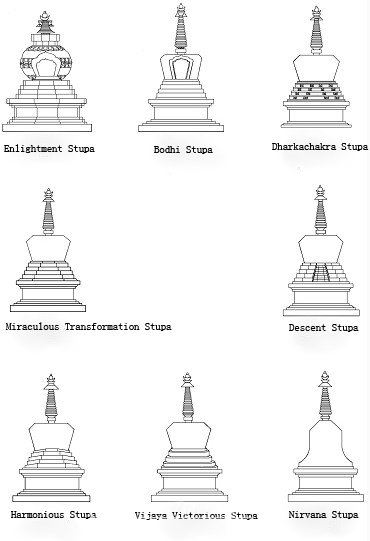 Harmonious Stupa: It symbolizes the peaceful reconciliation of Devadatta’s splitting monastic sects. It also has four levels of octahedrons with the edge angle of the groove surface over 90 degrees.

Vijaya Victorious Stupa: It symbolizes Shakyamuni empowered himself to extend three more months of longevity in the man’s world. The stupa of three circular levels was built to honor his success in beating Monster Death.

Nirvana Stupa: This stupa has no base but a bell-shape body to symbolize Shakyamuni’s nirvana.