Tibetan Music Bowls: What and How to Play Singing Bowls in Tibetan Buddhism

Tibetan music bowls, often called “singing bowls”, are a kind of bell used in Tibetan Buddhist meditation. Instead of hanging upside down and being struck, the bowl sits upright, and a wooden puja stick is used to vibrate the rim of the bowl, making its unique “singing” sound.

These bowls have been used in Tibetan Buddhism for centuries, and are an integral part of learning the Buddhist teachings as well as being used in meditation to attain enlightenment.

The origin of the singing bowls is lost in the mists of time. There are many debates on where they first came from, and many say that bowls made of the same materials came from ancient Mesopotamia. Similar bowls made from the same seven metals that have been unearthed in Persia (now Iraq) have been dated to be as old as 3,000 BC. However, since there are no written records of their origins, one can only speculate on the mystery of their beginnings. Some say that the great master, Padmasambhava, brought them to Tibet from India in around 800 AD. What is known is that the bowls could not have originated in Tibet, since the precious metals that are used in the making of the bowls are not found in the region. 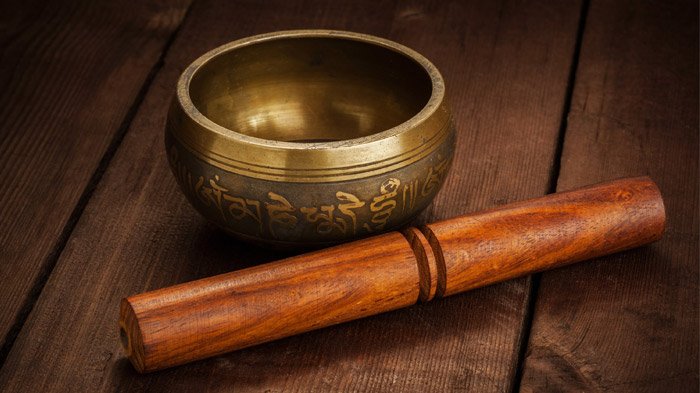 One thing that is known is that the bowls have been made in Nepal for over a thousand years, with Nepali artisans hammering the seven metals into one alloy by hand, and shaping them into the bowls that are seen in the monasteries of Tibet. Therefore, the name Tibetan Singing Bowls does not denote the makers, but are named for the peoples who used them. However, while the bowls are definitely Himalayan made, they were never Himalayan in origin, and this technology came to the Himalayas very late in Tibet’s history.

Tibetan singing bowls have been made the same way for centuries, but the art has since been lost during the move to more modern methods. Bowls are made more these days by machines, although they fail to get the perfect tone that the hand-made bowls achieve. Traditionally, the bowls were made by hand, hammering out their shape from sheets of metal alloy. Bowls that are more modern are mostly made from a kind of bronze alloy known as “bell metal”, which is a mix of copper and tin. However, traditionally, the bowls were made from a very high quality bronze, with a mix of other metals. This unique alloy also contained gold, silver, mercury, lead, and meteorite iron. This iron, which is known as thogcha, or “sky metal” in Tibet, was highly prized for its pure iron content, with minimal amounts of trace elements. This could only be obtained by meteorite iron, as the atmospheric burn-off removed many of the impurities in the ore. 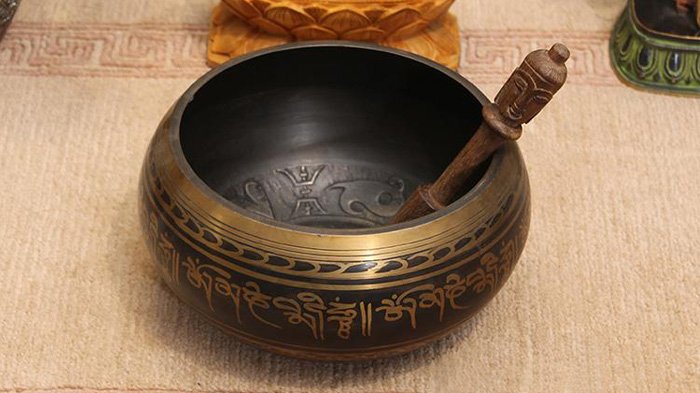 The quality and composition of the bowls, using multiple metals in the alloy, is thought to be the reason for the high quality of sounds from the antique bowls. Combined with age and design, these three elements are what make the antique bowls so sought-after in the modern market. While modern bowls can produce beautiful sounds, they cannot compare with the unique quality of the antique bowls.

The bowls can come in many different shapes and sizes, as well as different thicknesses. All have a unique tone to them, which was the aim of the original maker to obtain. Each maker would have his own style, and tone as well. Bowl types are varied, and include:

Jambati bowls, which often have visible hammer marks and are more dish shaped.
Thadobati bowls are defined by the flat base and relatively vertical sides, with an even rim.
Remuna bowls are similar to the Thadobati bowls in shape and timbre, except the rim is slightly narrower than the sides.
Manipuri bowls are the original singing bowls, and are similar in shape to the Jambati bowls. The name, Manipuri, comes from the northeast Indian state of the same name, which was once the center for production of metal and brass objects.
Mudra bowls are characterized by their flat bottoms, thick walls, and narrower rims, as w ell as their immense size.
Lingham bowls are known for the protrusion in the center of the base that sticks up into the bowl and for their extensive etchings, both inside and out.
Pedestal bowls have a small stand incorporated into the design, so the base is off the ground for better sound.

Sometimes there are bowls that do not fit into any of the normal categories, but look similar in size, markings, or design. Normally an individual as his own personal meditation bowl would have commissioned these one-of-a-kind bowls, to make it unique from those used by normal people.

How to Play Tibetan Music Bowls

The sound of the Tibetan Singing Bowls is unique throughout the world. When played with the wooden puja stick, the bowl resonates with sound from the echoes of the vibrations inside the bowl. To make the sound the player runs the puja stick around the rim of the bowl, either inside the rim or outside. The effect of the puja stick running along the edge causes vibrations in the metal, which is released from the bowl shape as sound waves. The pitch can be intensified or lowered depending on the speed of the puja stick, and whether it is being used inside or outside the rim. 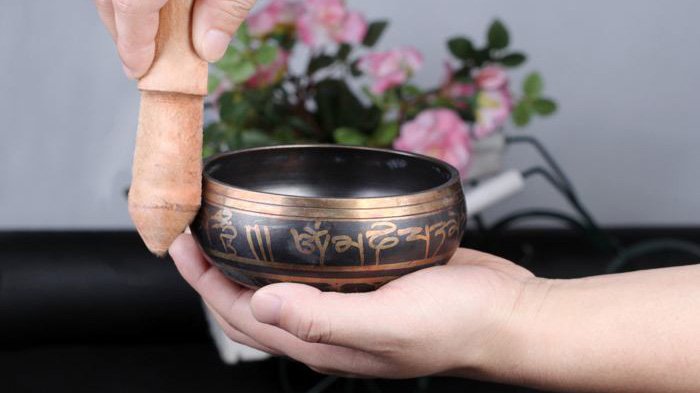 As they create this calming, contemplative sound, the bowls are widely used in Buddhist meditation throughout Tibet, in both monasteries and homes. It can be used to mark the beginning and end of a meditation period, or during meditation to aid in focusing the mind. Many also believe that the mantras chanted during the making of a bowl are released into the universe when it is played, aiding in the journey towards enlightenment.

For visiting Tibet, you can often see the bowls being used in the monasteries at the times of the monks’ meditation periods, and during some religious ceremonies. It is recommended that you do not take photographs of monks at prayer, unless they give you permission. Some monasteries for bid the taking of pictures inside, while others will allow it for a small fee.

The use of the singing bowl has come to western countries in recent years, and is now used in tantric meditation techniques, as well as healing meditation.

0 Comment ON "Tibetan Music Bowls: What and How to Play Singing Bowls in Tibetan Buddhism"