Have you heard about the mysterious mani stones in Tibet? If you colour yourself intrigued, read on. To start out, on a physical level—without knowing anything about their deeper meaning—they are masses of rock that have symbols and writing on them. But let’s get real, we know that nothing in Tibet has a mere surface value; if you dig a little, we uncover the truth: that everything has a deeper meaning here. 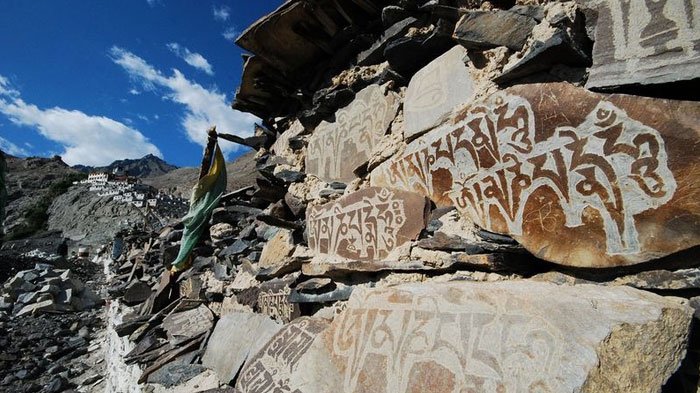 Scratching your head as to what these rocks could possibly symbolize? If you guessed that they are somehow related to Tibet’s now widespread Buddhist faith, you can give yourself a pat on the back, because you are spot on.

The Sacred Stone in Tibet

You’ve likely heard of the power of manifestation, a topic gaining traction today in the spiritual world, which essentially speaks to our ability to get what we want with focus and meditation on our goals. Well, these stones—often termed “magical jewels”—have long been believed to hold mystical power that aids in this divine manifestation. So the story goes, if you have a strong desire for a particular entity—be it something as precious and illusive as “treasure” or something as substantial and vital as food—you can come to acquire it with the help of mani stones. 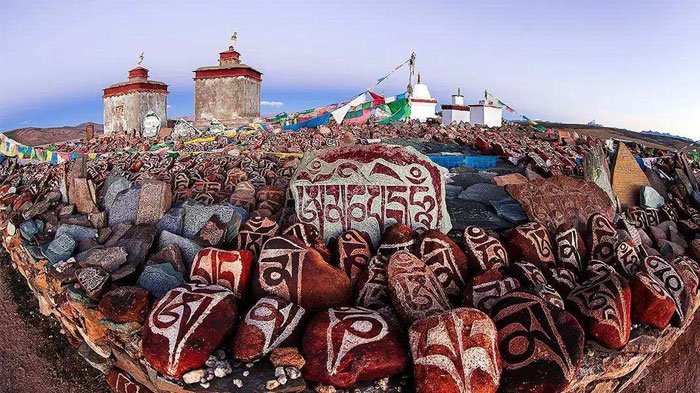 So how did they come into being? It all begins back when Buddhism was founded, as a means for the people to, not only help spread the faith, but, perhaps most importantly, to celebrate it.

To express their love of the faith, Buddhists began to mark stones with special images, phrases and mantras. It was a means of communicating their devotion, to the faith as a whole, as well as to specific deities. So, you see, these inscriptions are what differentiate mani stones from regular, non-sacred rock forms. What one chose to decorate the stone with, spoke to what was of value to the believer. 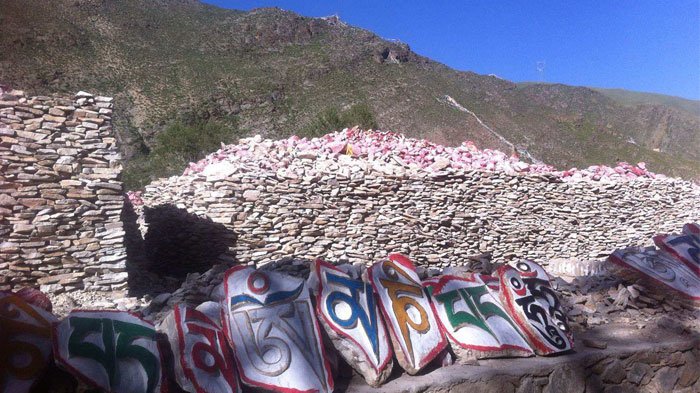 Some examples of popular images that were engraved are those of gods, buddhas, bodhisattvas, and impactful religious folk like monks and lamas. While writings that were sketched often consisted of a mix of more formal prayer and personal notes that reflected the engraver—how he was feeling, what he was working toward in his life, and what he was currently longing for.

The most popular traditional prayer inscribed is Om Mani Padme Hum. If you inspect a few mani stones, you are more than likely to come across this. So what does it mean? Why is it the favourite?

It has long been believed that repeating this mantra is the key to being blessed by Chenrezig. Receiving blessings from this deity is so crucial for Tibetan Buddhists because he is looked on as the most important godly figure of all. His significance lies in his responsibility, as the Bodhisattva of Compassion, for relieving the pain and suffering of all of us on earth. As a side note— this heavy task is said to have broken him down at one point in history, which is why he is often depicted in art works as having many limbs and many heads; they are meant to represent the shattered fragments of his body. 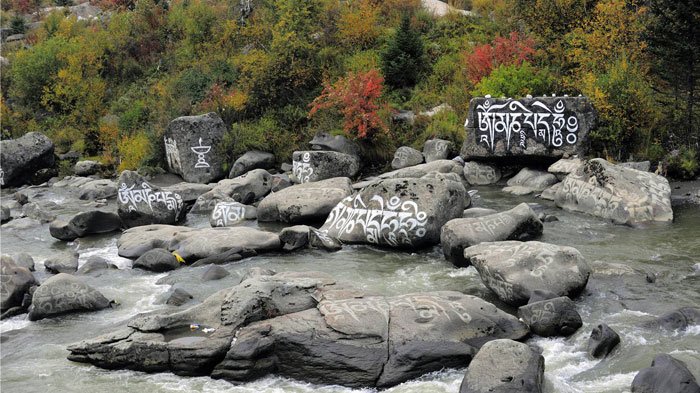 Ultimately, Tibetan Buddhists believe that when you find yourself engulfed in the darkness—perhaps having a harder time being the sensitive, caring, enlightened person you are meant to be—the repetition of Om Mani Padme Hum will help you become more aligned with Chenrezig and his mission. So, in essence, this mantra has the power to guide us toward becoming the most compassionate, highest version of ourselves.

So, in fact, finding a mani stone without this powerful mantra is actually quite rare. After all, every Buddhist is primarily focused on becoming enlightened, and this prayer is one of the keys to awakening this higher state of being in each of us.

A Myriad of Mani Stones

Each mani stone will differ, for each inevitably is inscribed with unique engravings. The engravings selected reflect both the engraver’s current state, and his intention with the sacred stone. If he is looking, for instance, to create a mani stone that may be devoted to a deity upon its completion, all images and inscriptions will speak to that figure, and may even be planned in advance. If he is instead looking to offer up the artistic creation of his mani stone—meaning the process of inscribing the stone is a meditative act—the stone becomes a reflection of surrendering. Its creation becomes the ritual, rather than in the former case where the ritual takes place as the completed stone is offered up. 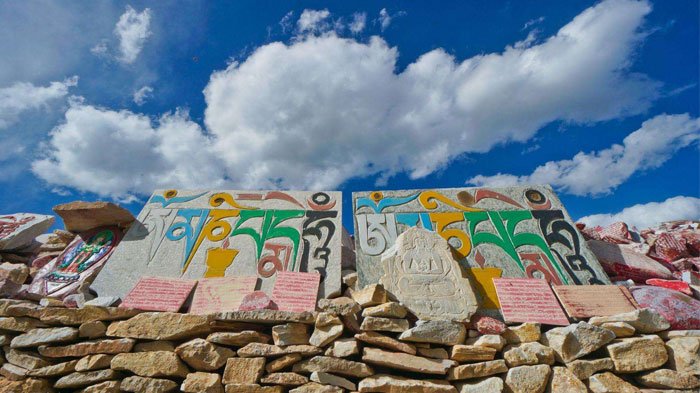 On the more physical realm, there lies the more easily identifiable difference: size. The larger stones, which have less inscriptions, can be found in piles, lining the sides of roads and waterways. Together, they form what are called “mani walls.” The smaller, heavily engraved stones are grouped together in mounds, which reach toward the heavens; in this way, it is believed that the prayers of the people that are inscribed on the stones will be noticed and answered by the deities.

One quick note here - if you come upon a collection of mani stones, be sure to do as the locals do and weave your way around it—clockwise. This shows respect to the faith, and for you believers out there, you’ll be engaging in a form of movement prayer, wherein the gods will be called to respond by blessing you with peace and wellbeing.

The Affiliation with the Tibetan Yak

You may notice that some mounds of Mani stones have a yak head placed on them, or that the stones themselves feature engravings of the yak. This is because the yak is a religious totem in Tibet. They are a divine species that represent the heavens, for this is where they originated according to the teachings of the Bon faith. In addition to their spirituality, yaks are also representative of Tibetan life, in the sense that Tibetans have long relied on yaks for sustenance; as the source of both meat and dairy products, yaks are a staple in Tibetan cuisine. It is for this important role the yak plays in Tibetan culture that you will see it on Mani stone mounds.

While you’re in Tibet, you may find that you need more than a guided tour to spark your interest in mani stones. Take a hands-on approach and really immerse yourself in the Tibetan culture by enrolling in an arts workshop, wherein you can decorate mani stones yourself. Choose the symbols that most resonate with you, grab some paint, and go to town on your very own magical stone. If you have little ones with you, they too can roll up their sleeves and join in the fun. We can’t think of a better way to become more closely acquainted with the Buddhist faith than this. 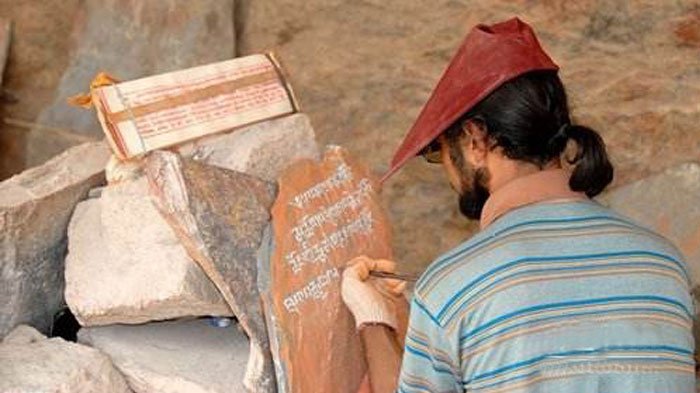 These prized, tangible facets of the faith are so important to the history of Buddhism, but also for us as travellers. Nowadays, with our ever-handy pocket-computers, also known as iPhones, we can consume so much information about any topic we choose. We can traverse cities listening to audiobooks devoted to said cities, and—don’t get us wrong—this is great. What a fantastic educational tool! There’s one thing though, it’s all so intangible and ephemeral. You could easily find yourself falling down the rabbit hole of feeling like you need to listen to this podcast episode, then that one, without ever seeing for yourself the subjects in which they discuss.

So, when you get to Tibet and you set your gaze on a physical object like a mani stone—or better yet, touch one—you are taking a piece of history in your hands. It becomes real. It’s no longer just a long lost story you read about. You’re connected on an earthly level.

Therein lies the very power of mani stones, they are the physical manifestation of a spiritual faith that allow you to form a deeper bond with the at times very otherworldly nature of Buddhism. And if you don’t particularly care for religion, think of them then from the anthropological standpoint: a piece of the past that you can touch. What most fascinates you about the mani stones?