The Six Protectors of Tibetan Buddhism

Tibetan Buddhism is the form of Buddhist canon and establishments characteristic of Tibet. It originates from the latest stages of Indian Buddhism and preserves "the Tantric status quo of eighth-century India." A dharmapāla, translated as protector of religion, morals or law, is a type of wrathful god in Buddhism. The chief roles of a dharmapāla are said to be to avert the inner and outer obstacles, which prevent disciples from attaining spiritual realizations. The protectors are also responsible to foster the necessary environments for the practice of Buddhism. There are six important protectors of the Tibetan Buddhism. Let us learn about them one after the other.

Mahākāla is the enraged form of the gentle and empathetic Avalokiteshvara Bodhisattva, the deity for indefinite compassion. In Tibetan iconography, Mahākāla is usually black although he appears in other colours in many occasions. He has two to six arms, three bulging eyes with flames for eyebrows, and a beard of hooks, with six skulls crowning his head. This figure is the guardian of the tents of nomadic Tibetans, and of monasteries, and of the Tibetan Buddhism as a whole. Assuaging interferences, elevating life, virtue and wisdom, attracting people to Buddhism and abolishing confusion and ignorance are his chief responsibilities. 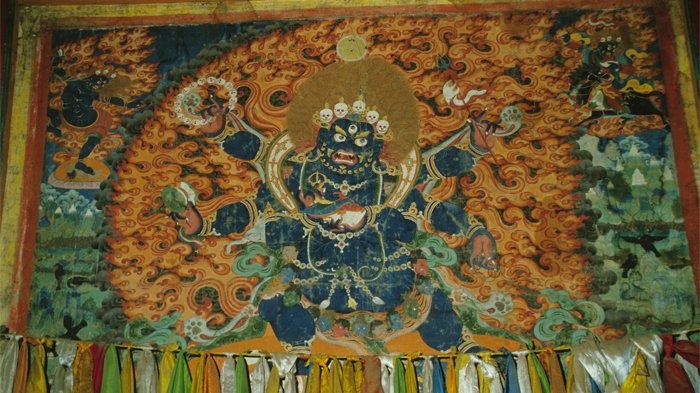 According to Hinduism, Mahākāla is the consort of the Goddess Kali. In Tibet, tourists can visit the Dhe- Tsang monastery to get a taste of this deity’s reverence. The monastery, built in 1414 by a close follower of Je Tsongkhapa, is found in the Gyalrong district of eastern Tiber. When the founder, Ngawang Drakpa, visited the region with the motto of constructing a monastery there, he could not decide on the perfect location to build the hermitage. At that exact moment, a gigantic crow swooped down on him, picked up his scarf and flew away with it. As the monk hurried to follow the crow, he found the scarf hanging from the branch of a Juniper tree. Here, the crow is visualized as the incarnation of Mahākāla in Tibetan Buddhism. Taking this event into account, and regarding it as an auspicious omen, the monk constructed the monastery around the tree, which now itself serves as a natural pillar of the prayer hall.

It is true that Mahākāla’s images are revered in all Tibetan monasteries. But, it is only at the Dhe-Tsang that he is regarded as a living member of the sangha. Thus, during offering ceremonies, it is customary for the chant leaders to announce- ‘Do not forget the black man’s share’ and the exact of what each monk receives is preserved for this deity and presented to his sacred image.

Paintings of Mahākāla in Tibetan Monasteries

There are paintings of this deity for tourists to enjoy. Each of the three forms of this god has some special qualities and aspects, symbolized by the physical forms and elements they hold in their hands.

The Six-Armed Mahākāla, where the deity is perceived as the fierce and mighty emanation of Avalokiteshvara, is the favourite one of the Gelukpa order of Tibetan Buddhism. He is adorned with a crown of five skulls, representing the transmutation of the five vices (pride, anger, ignorance, jealousy and attachment) to virtues. The deity has six arms, signifying the successful completion of the six perfections (morality, peace, vigour, meditation, insightful wisdom and generosity). 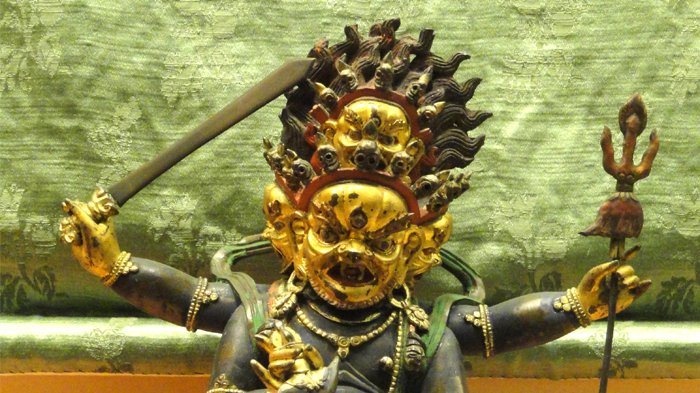 The Four-Armed Mahākāla has four duties- healing sickness and troubles, increasing wisdom, preaching morals and destroying confusions. The White Mahākāla is the wealth aspect of the deity which specifically supports comfort and economic welfare of followers. He has three eyes and six arms with his main rain hand holding a wish-fulfilling jewel mounted on a jewel-tipped handle in front of his chest.

According to Hinduism, Mahākāla is the ultimate form of Shiva, the destroyer of all elements. There is nothing beyond him, no element, no dimensions and not even time. That is why he is maha (greater) kaal (time).

Palden Lhamo is a protecting Dharmapāla of the Gelug school of Tibetan Buddhism. She is the fuming divinity considered to be the principal protectress of Tibet. This sole female among the traditional 'Eight Guardians of the Law' is usually depicted as deep blue in colour and with red hair symbolising her wrathful nature, crossing a sea of blood riding side-saddle on a white mule. The mule has an eye on its left rump where her angry husband's arrow hit it after she killed her son (who was destined, and being raised to be the one to finally put an end to Buddhism) and used his skin as a saddle blanket. She has three eyes and is often shown drinking blood from a human skull. 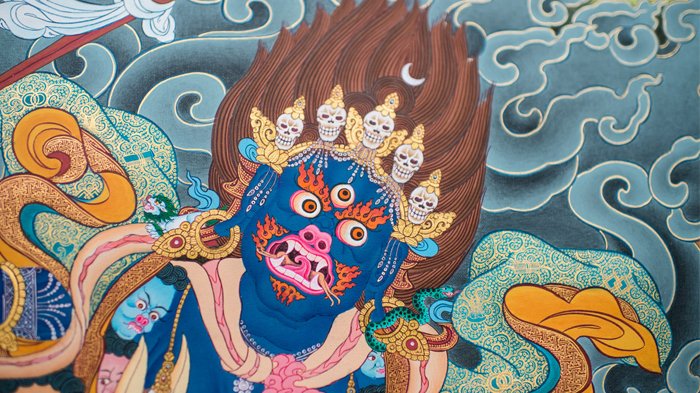 If you are a visitor to the Tibet and want to learn more about the murals and painting of this goddess, you should visit the mountain to the south of Chokorgyel Monastery. It is the "blue" residence of Panden Lhamo, on which a sky burial site is situated. The hermitage was originally built in a triangular form to reflect the symbolism of its position at the confluence of three rivers and surrounded by three mountains. Furthermore, it represents the conjunction of the three elements of water, earth and fire, as well as the female principle of Palden Lhamo in the form of an inverted triangle. 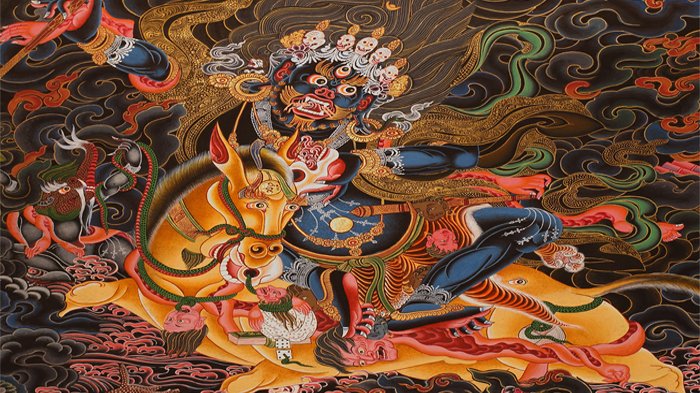 This East-Asian Bodhisattva is associated with compassion, and venerated as the Goddess of Mercy by Mahayana Buddhists. The goddess is immensely loved by all Buddhist traditions in a non-denominational way and is revered under the name of Chenrezig in Tibetan temples. In the Karandavyuha Sutra, the deity is called "The One with A Thousand Arms and Thousand eyes" and is described as superior to all Gods and Buddhas of the Indian pantheon. The Sutra also states that "it is easier to count all the leaves of every tree of every forest and all the grains of sand in the universe than to count the blessings and power of this deity". 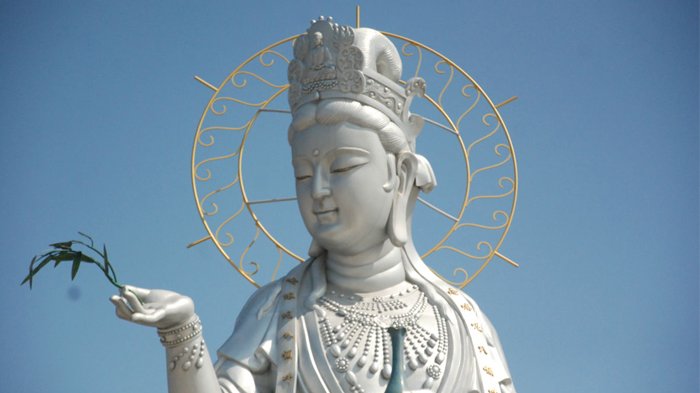 Guanyin is usually depicted in a white flowing robe symbolizing purity, and usually wearing necklaces of Indian/Chinese royalty. In the right hand is a water jar (as the Sacred Vase the water jar also one of the Eight Buddhist Symbols of good Fortune) containing pure water, the divine nectar of life, compassion and wisdom, and in the left, a willow branch to sprinkle the divine nectar of life upon the devotees as to bless them with physical and spiritual peace. The willow branch is also a symbol of being able to bend but not break. The willow is also used in shamanistic rituals and has had medicinal purposes as well.

Tourists can visit and learn more about this deity in the Guanyin temple of Tibet. Situated in the Jinchuan County of the Rgyalrong Tibetan region, the Guanyin Temple is the site that finds the largest number of pilgrimages in Amdo Tibet. The monastery is located at the top of the Guanyin Mountain and supervises the Checen River as it flows through the Guanyin Town. 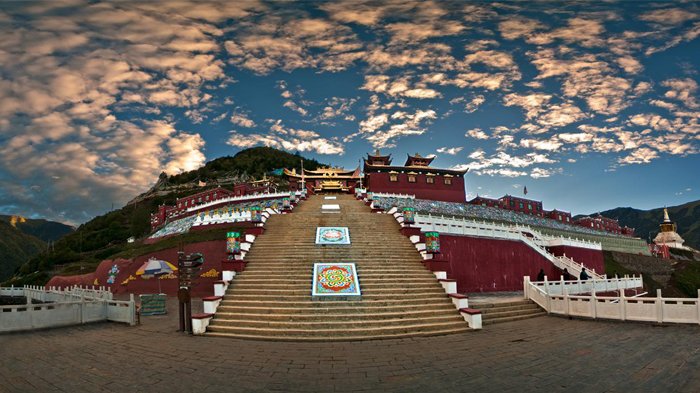 Manjushri, the embodiment of all Buddhist wisdom, is the Bodhisattva regarded as the crown prince of Buddhist morals, who is able to extinguish afflictions and bring about enlightenment. He holds this title for being the instructor of seven different Buddhas long ago. The deity is depicted with a double-edged flaming sword in his right hand and a lotus flower in his left, on which rests the Great Wisdom Sutra. He is often seen riding a lion, which is known as the king of hundred animals and symbolize the stern majesty of wisdom. The sword represents the sharpness of wisdom which can cut through illusion. 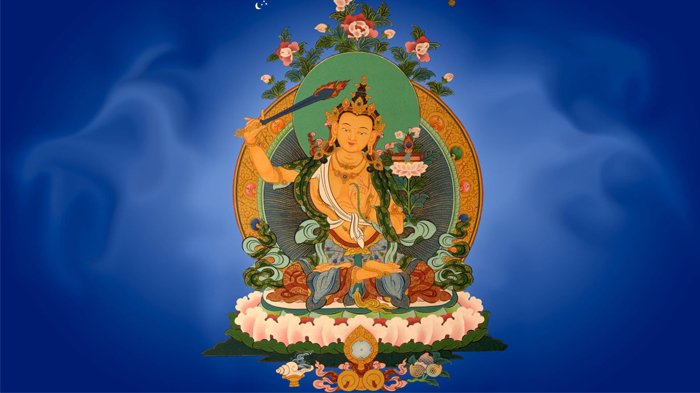 In order to learn more about this deity and visit his iconographies, you can make your way to the Sakya Monastery in Tibet. Sakya Monastery was built at a promising location prophesied by the great Indian master Atisha, who foresaw that emanations of Mahakala, Manjushri, Vajrapani, and Avalokiteshvara would take birth at this place and perform great activities for the benefit of the Dharma and all beings. It is situated in the city of Sakya, in the Tibetan region of Tsang, about one hundred miles north of the border between Tibet and Nepal. 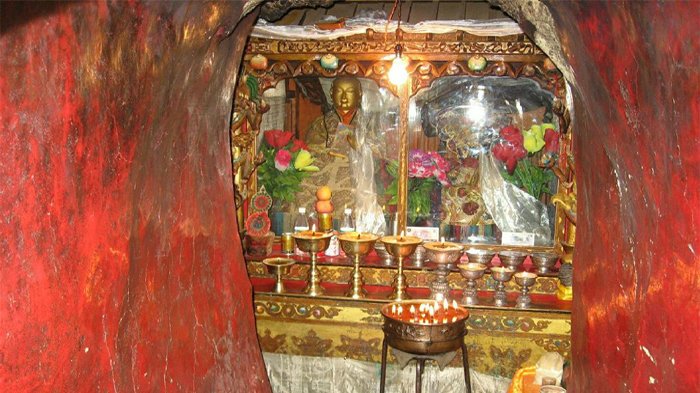 Vajrapāṇi, one of the earliest-appearing bodhisattvas in Mahayana Buddhism, is the protector and guide of Gautama Buddha, symbolizing the Buddha's supremacy. Vajrapāni is extensively represented in Buddhist iconography as one of the earliest three protective deities or bodhisattvas surrounding the Buddha. Vajrapani is associated with the Hindu god Indra, thereby being represented as the thunder deity in India. As Buddhism prolonged in Central Asia, and bonded with Hellenistic influences into Greco-Buddhism, the Greek hero Hercules was espoused to embody Vajrapani. He was then classically depicted as a hairy, muscular athlete, exercising a short "diamond" club. Mahayana Buddhism then further spread to China, Korea and Japan from the 6th century. 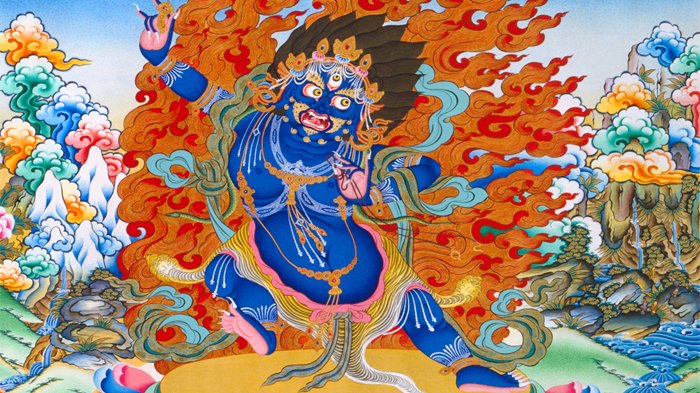 Vajrapani to enjoy while exploring Lhasa

When touring Tibet, you might happen to find Vajrapani in the grotesque rock painting in Drepung Monastery or see it on the Thangka painting workshop in bustling Barkhor Street. You will find yourself entranced by the mysterious and vivid protectors in both Tibetan monasteries and houses of local Tibetans. 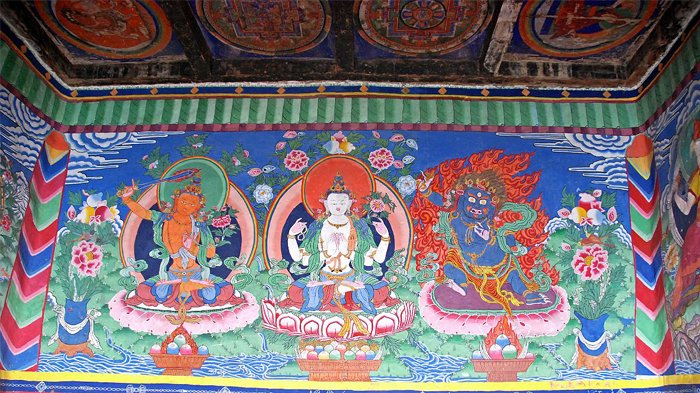 The Cakrasamvara Tantra, considered as the prime class of the Anuttarayoga Tantra in Vajrayana Buddhism, is also known as the Discourse of Sri Heruka (sriherukabhidhana) and the Samvara Light (Laghusamvara). It is mostly dedicated to unfolding rituals and meditations which produce either mundane accomplishments such as flight and the supramundane siddhi of awakening. These are achieved through deity yoga (visualizing oneself as the deity) and the use of mantras. 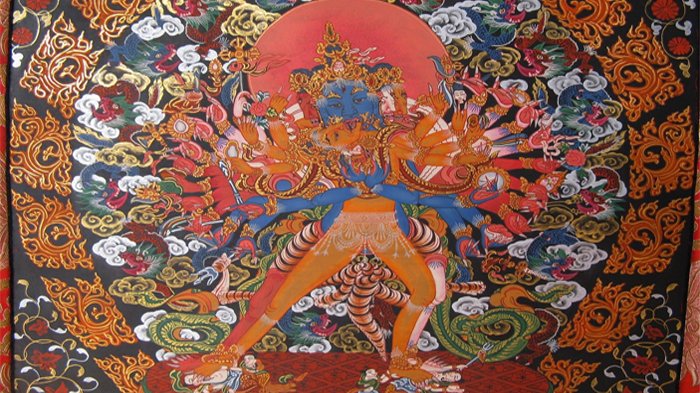 The dominant deity of the mandala, Saṃvara, is a form of Heruka, one of the meditational deities of the Sarma schools of Tibetan Buddhism. Saṃvara is portrayed with a blue-coloured body, four faces, and twelve arms, and embracing his consort, the wisdom dakiniVajravārāhī in Yab-Yum. Other forms of the deity are also known with varying numbers of limbs.

You can learn more about the deity and the tantra in the Gyuto monastery of Tibet. It is one of the renowned monasteries in Tibet which specializes in the study of Tantric mediation, rituals and Buddhist philosophy. The main disciple of the first Dalai Lama, Jetsun Kunga Dhondup, founded this monastery in 1474 in eastern Tibet. 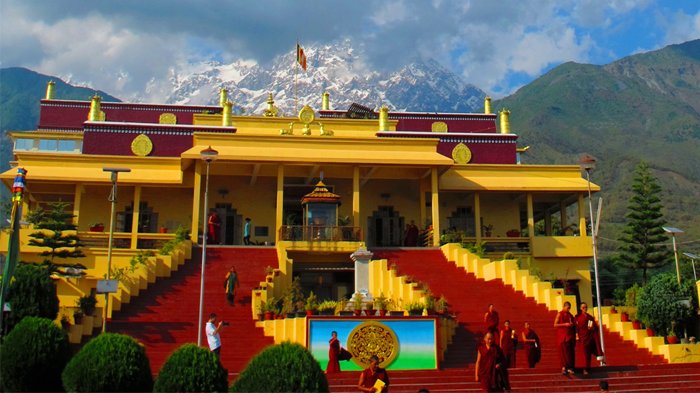 Exciting, isn’t it? Tibet is full of many such wonders and if, like me, you cannot wait for many such mysteries to unfold before your eyes, plan up your tour now! You will love it here.