Whilst Tibet offers some of the most incredible sights and immersive culture in the world, there is another side to this incredible place; it’s religious side. Tibet’s primary religion is that of Buddhism, and one of Tibetan Buddhism’s most fascinating features is the Tibetan Ritual Items. They are used almost every day by Buddhist monks and laymen alike, and are an important part of Tibet’s history and culture.

Tibetan ritual items represent different aspects of the Buddhist religion and belief system. Different objects hold different roles and, are help to distinguish Tibetan Buddhism from other forms of Buddhism. Normally, Tibetan Buddhists leave offerings and gifts to a Buddha in the hopes it will grant them good luck and fortune. The ritual objects can help in ensuring that this process works seamlessly, and that the Buddha hears the gift bearer’s wishes.

Most objects used by Tibetan monks are ornate and well crafted. They tend to take on the shapes, texture, and colors of rare metals and stones. Gold features heavily amongst the different objects. In order to help you understand more about the importance and uniqueness of these important artifacts, here are 8 of the most important Tibetan ritual items.

Buddhist prayer bells tend to be small and innate. With an ornate handle forming into a curved bell, they are generally made from a shiny metal, sometimes gold. The top of the handle looks to be similar to what you might think is a crown. The patterns are complex and unyielding, representing the complexity of the religion. The Bell curve, on the other hand, is much more simple, containing of simple and repetitive patterns. 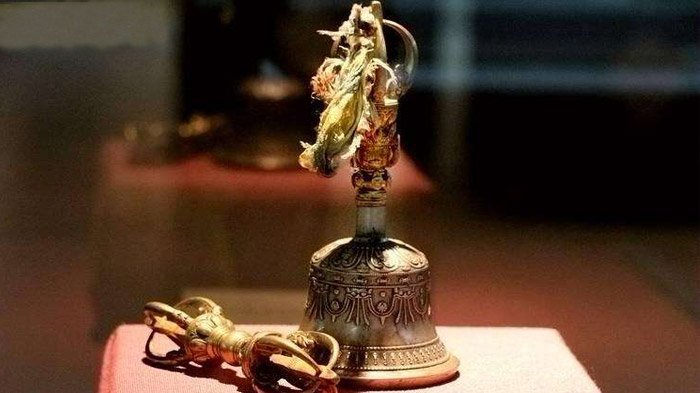 The bells are rung in order to evoke protection from deities. Their sound is meant to symbolize the voice of the Buddha, equaling the sound of the heavenly law, or ‘Dharma’. At other times, the bell can represent a call to serenity, and an indication that it is time to start prayer and reinforce faithfulness. Whilst mainly used by Tibetan monks to bring order to a group of people passing by for worship, bells have also been used by those passing by, in order to indicate their answer to a call for prayer.

A DorJe almost always comes hand in hand with a Buddhist Prayer Bell. One of the most important Tibetan ritual items, the DorJe is an intricately designed and ornate compliment to the bell. It is also known as the ‘thunderbolt’. Primarily, it symbolizes the ‘thunderbolt’ of enlightenment. The point at which a person is able to let go of the realities of the real world and the need for material possessions, and can finally start to become an enlightened person. 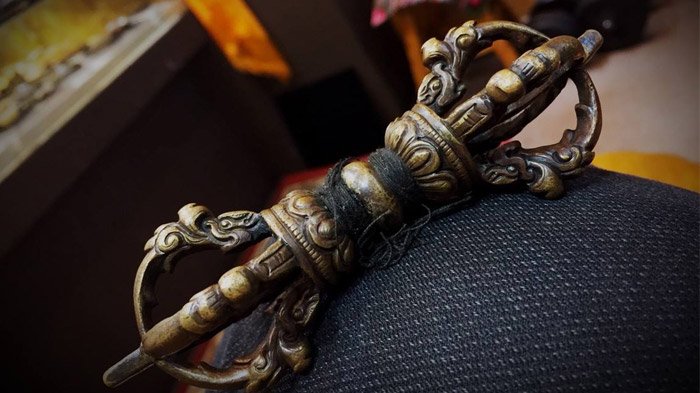 During prayer or rituals, the DorJe will usually be held in the right hand. This represents the male aspect of belief – the method. The Buddhist prayer bell would be held in the other hand, to symbolize the female aspect of wisdom. Only when these two things come together can a person achieve enlightenment. Make sure to keep your eyes peeled for this unique pair of Tibetan ritual items, the next time you witness a Tibetan prayer ritual.

The Tibetan drum, or Damaru, might seem a little familiar. That’s probably because of the way in which you play this instrument. You take the drum and roll it from side to side, whilst small beads on the end of strings will ‘bang’ the leather drum heads. Estimates guess that this instrument reached the Himalayas in around the 8th century, and this wood and leather object has been a staple in the Buddhist faith ever since. Within Buddhism, these Tibetan ritual items hold immense significance during tantric practices. 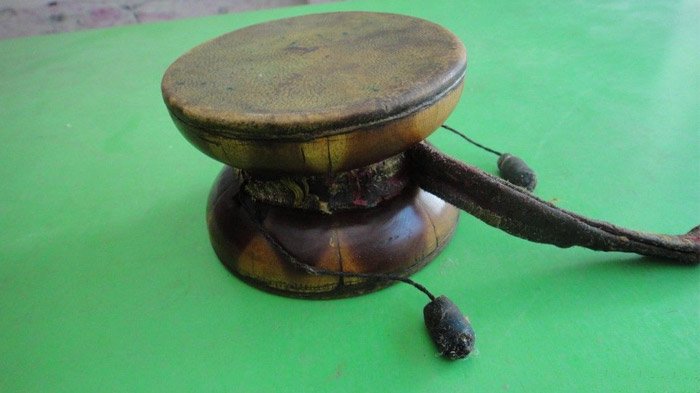 There are actually three different types of Damaru, each one holding its own properties and purpose. The most widely used is the Chöd Damaru. This tends to be made from wood and covered with leather skins for the drum surface. Usually, they are 8 to 12 inches in diameter, although in rare cases this has been known to vary. The purpose of the Chöd Damaru is to be used during the tantric practice of Chöd, where a believer tries to ‘cut through’ the problems that face them and hinder their quest for enlightenment.

A slightly more grotesque Damaru is that of the Skull Damaru. This is certainly one of the more unusual Tibetan ritual items, and takes the form of a human skull, shaped into that of a drum. This version tends to be used in temples and large festivals, so keep an eye out when visiting Tibetan religious festivals. It’s a unique sight and usually coated in rare and precious stones.

The Shankha looks like an ornate snail shell. The outside is usually decorated with patterns regarding the Buddhist faith, and is usually painted in light, white colors. The shell is one of the eight auspicious symbols of Buddhism (the Ashtamangala), and represents water and Buddhism’s pervasiveness. 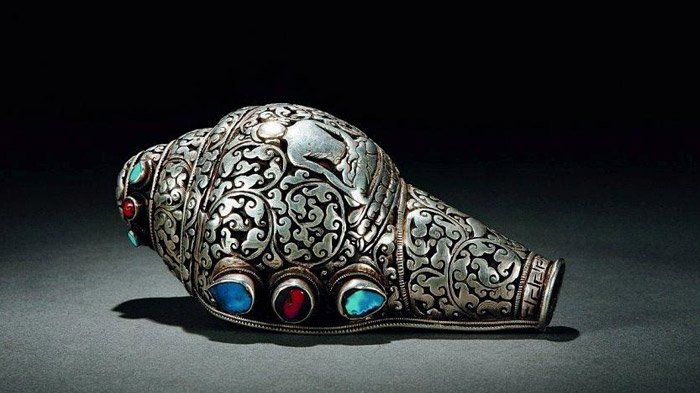 If you want to see one of the conches in person, it tends to be used to bring together and call on followers to meet. During rituals, it is sometimes used as a musical instrument, but can also be used to carry holy water from one place to another.

The Malas is probably one of the most well know Tibetan ritual items. These Tibetan prayer beads are composed of 108 beads, each of which signifies the mortal sins of humanity. The beads themselves tend to be made from the wood of a special tree, known as the Ficus religiosa. Sometimes, bodhi seeds are also used, or rattan seeds. The different materials generally signify different uses, with the wooden beads being seen as generally ‘all-purpose’. 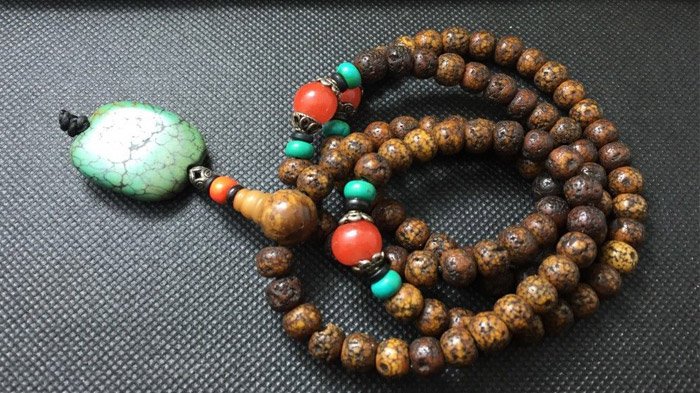 A visit to any Buddhist temple will usually allow you to see the Tibetan prayer beads both on sale, and being used by the monks themselves. Monks will usually count the beads whilst praying.

The Gawu box is an amulet usually made from silver, which is used to hold an image of the Buddha made from metal or clay. The outside is usually decorated with expensive and rare stone, with ornate designs and patterns you’ll find on other Tibetan ritual items as well. Usually, the Gawu is used during prayer to ward off evil spirits and bring about the Buddha’s blessing. 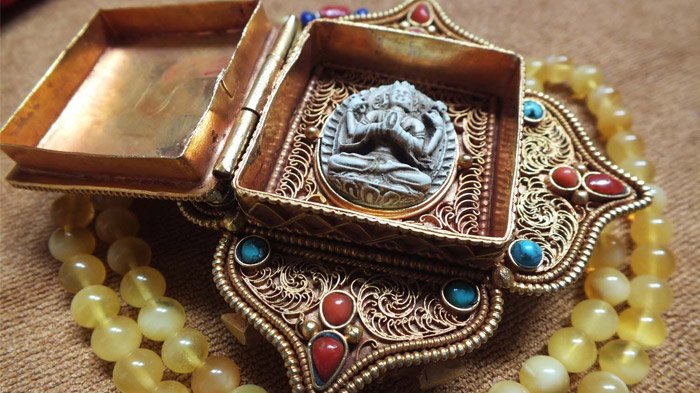 Whilst travelling to Tibetan temples, keep an eye out for the differences you’ll see. One of the most striking is that males tend to wear a square shaped amulet, whilst women will adorn a more rounded one.

The Tibetan prayer wheel is a cylindrical wheel which comes in many different shapes, sizes, and materials. Whilst small, personal ones can be found, there are also those which are much larger and must be held up by (usually) wooden structures. One thing they tend to have in common, though, is that they usually come in gold. The Prayer wheels also tend to be decorated with the 8 auspicious symbols of Ashtamangala. 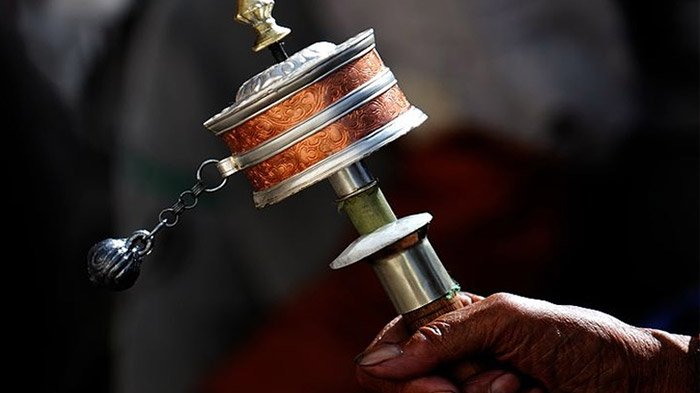 Larger, stationary prayer wheels tend to be located in most monasteries. Visitors can usually move the wheels themselves by running their hands over them as they walk past.

The Tibetan Butter Lamp is found in almost all Tibetan temples and sanctuaries. The (usually) golden cup tends to burn Yak Butter, which represents the illumination of Wisdom. If you head to the temples early in the morning, you’ll find monks taking part in their morning ritual, which consists of an offering of the Tibetan butter lamp, along with seven other bowls containing other symbolic offerings. Pilgrims, whilst travelling between temples, tend to supply oil for these lamps to gain favor. 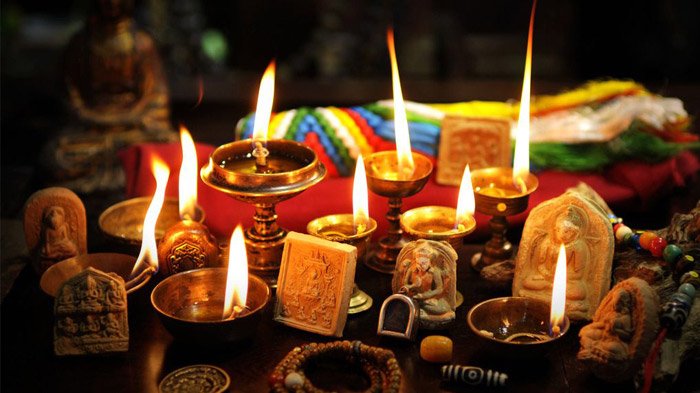